Sunday, February 28, 2016: Such a day. While church and work nabbed a big chunk of my daylight, I got out-and-about for a dig-about over near SRHS. Slow go … hardly anything worthy of an in-field photo except maybe this early United States of America – AAA – antique license plate badge. It's bent a bit but after my professional cleaning up it should look quite cool. Look at the right leg of the large "S" and you'll barely see the first "A A A" trademark. This is much rarer than the many and varied American  Automobile Association "toppers" (below) of which I have maybe a dozen. The type like the one I found today is being copied; made to look just like this original. You can tell the repros by how shiny and unused the screw/bolt holes are at the bottom. 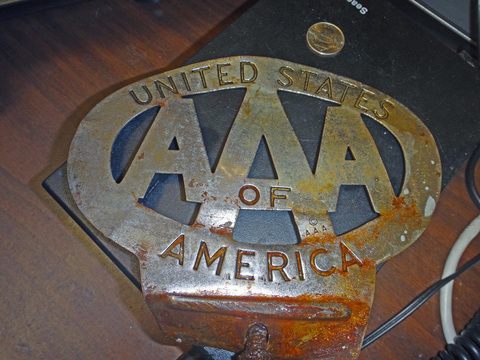 Here is just one of the far more common variety; virtually every state has one or more. 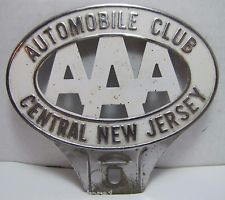 I’ll be keeping in-field photos coming due to a new (non expensive) all-weather camera I just got. By name it’s the Sony Cyber Shot DSC-TX30 Waterproof 18.2MP Black Digital Camera. I got it and a “kit” with extra battery and some other cool camera gadgets for a touch under $200. It is also a video camera when a not-included memory card is inserted; otherwise it uses internal memory for loads of photos. 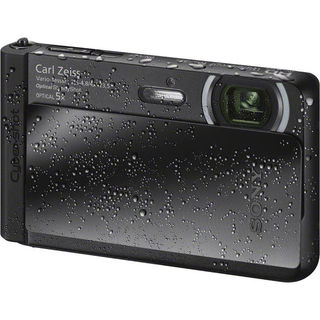 Sell point: In “auto” it instantly interprets what it should be shooting, i.e. landscape, low light, backlight, macro,  flash needed (automatically activates) and, my favorite, something called “magnifying glass.”

Downside: The lens cover is the entire front of the camera. Oddly, it's a bit of a bitch to get open, especially with dirty or damp hands.

That magnifying glass is exactly what I needed this camera for: Getting on-scene shots of stuff I find in the tough-going outback; stuff that needs close ups. I just took this needless night-shot close-up of some bakelite jewelry just sitting on my desk. Flash kicked in. Very true to color. Unedited. 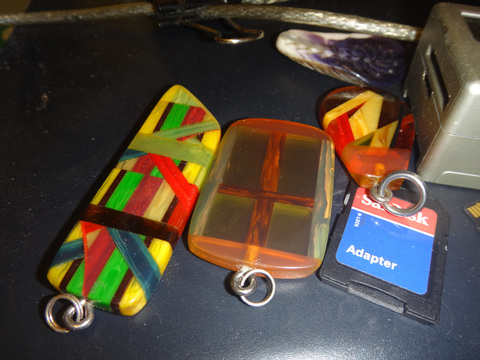 Here are some point-and-shoot pics I got of dug items yesterday. Of course, you're only seeing them as good as this webpage allows. On my screen they're much richer and clearer.

The situation was such that I didn't have time to do more than yank the camera out of my dirty pocket and let it do the rest. Now to see if it is as "dust-proof" as they say, as in ... 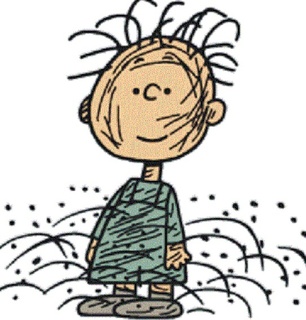 By the by, I have a couple very high-end cameras (2 Nikons, one Canon) that can shoot circles around this Sony. However, those professional units are not suited to be thrown into my backpack -- or pocket. When a situation demands the finest images possible, my Sony will have to take a distant back seat to the big boys.

I have yet to see a gold coin or Spanish silver found on LBI beaches. I know of dozens upon dozens upon dozen of stories of them being found. But, upon further investigation, the tales were dead ends -- or, in the cases of the few coins I actually saw,I easily ruled out any chance the coins came out of the sand or surf. I have developed a VERY trained eye regarding such things. Of course, with sand pumped in from off LEI or with the exposed sedge banks in Holgate, it might be time. Here is a look at a true sand/ocean P8. Note hydrogen sulfide scars.

Got it done!! Team Tailin' Toads!! We each caught a stud!! 4th Place in the Florida Pro Redfish Series! Man I love my partner!!

Plus this is the only way to store your big soft swimbaits. Keeping them perfectly straight is crucial. FILE - In this Jan. 4, 2015 file photo, a kaleidoscope of Monarch butterflies cling to tree branches, in the Piedra Herrada sanctuary, near Valle de Bravo, Mexico. Monarch butterflies have made a big comeback in their wintering grounds in Mexico, after suffering serious declines, investigators said Friday, Feb. 26, 2016. (AP Photo/Rebecca Blackwell, File)

MEXICO CITY (AP) — Monarch butterflies have made a big comeback in their wintering grounds in Mexico, after suffering serious declines, experts said Friday.

The area covered by the orange-and-black insects in the mountains west of Mexico City this season was more than three and a half times greater than last winter. The butterflies clump so densely in the pine and fir forests they are counted by the area they cover rather than by individual insects.

The number of monarchs making the 3,400-mile (5,500-kilometer) migration from the United States and Canada declined steadily in recent years before recovering in 2014. This winter was even better.

While that’s positive, the monarchs still face problems: The butterflies covered as much as 44 acres (18 hectares) 20 years ago.

“The news is good, but at the same time we shouldn’t let our guard down,” said Omar Vidal, director of the World Wildlife Fund in Mexico. “Now more than ever, Mexico, the United States, and Canada should increase their conservation efforts to protect and restore the habitat of this butterfly along its migratory route.”

The United States is working to reintroduce milkweed, a plant key to the butterflies’ migration, on about 1,160 square miles (3 million hectares) within five years, both by planting and by designating pesticide-free areas. Milkweed is the plant the butterflies feed and lay their eggs on, but it has been attacked by herbicide use and loss of open land in the United States.

Dan Ashe, the director of the U.S. Fish and Wildlife Service, said that in the first year of that effort, the United States had managed to restore about 250,000 acres (100,000 hectares) of milkweed, and raised about $20 million for the program.

“It is time for celebration because we see the beginning of success,” Ashe said. “But our task now is to continue building on that success.”

The Washington, D.C.-based Center for Biological Diversity, which is pushing for endangered species status for the monarchs, noted that even with the rebound, the butterflies are still only at 68 percent of their 22-year average. It said in a statement that “the population was expected to be up this winter due to favorable summer weather conditions in the monarch’s U.S. breeding areas.”

“The increase is certainly great news, but the bottom line is that monarchs must reach a much larger population size to be resilient to ever-increasing threats,” said Tierra Curry, a senior scientist at the Center.

In Mexico, meanwhile, illegal logging has remained a problem. It more than tripled in the monarch butterflies’ wintering grounds in 2014, reversing several years of steady improvements. Illegal logging had fallen to almost zero in 2012.

Authorities said the reserve’s buffer area lost more than 22 acres (9 hectares) in 2015 due to illegal logging in one area, but said the tree cutting was detected and several arrests were made.

The forest canopy acts as a blanket against the cold for butterflies forming huge clumps on branches during their winter stay in Mexico.

Monarch expert Lincoln Brower wrote in a research paper that the 2015 forest loss was actually 25 acres (10 hectares) in the reserve area, and said the illegal logging “questions the effectiveness of current strategies to protect the already precarious overwintering habitat of the monarch butterfly.”

The logging took place in a particularly sensitive area of the reserve, and if butterflies can’t find shelter there, “they may be forced into forested areas with less microclimatic protection,” exposing them to potential cold and rain that can prove fatal, Brower wrote.

Alejandro del Mazo, the head of Mexico’s protected natural areas, credited the three countries for their cooperation and said they were on their way to achieving the goal of having 220 million butterflies in the reserve by 2020. Del Mazo estimated there were 140 million this year.

“This is a motivation for us to continue building bridges between our three countries, not walls,” Del Mazo said.

The migration is an inherited trait: No butterfly lives to make the full round trip, and it is unclear how they find their way back to the same patches of pine forest in Mexico each year.

Some scientists suggest the butterflies may release chemicals marking the migratory path and fear that if their numbers fall too low the chemical traces will not be strong enough for others to follow.

The long-term trend is troubling. After their peak in 1996, when the monarchs covered more than 44 acres (17.8 hectares), each time the monarchs have rebounded, they have done so at lower levels. The species is found in many countries, but experts fear the migration could be disrupted if very few butterflies make the long trip.

Largely indigenous farm communities in the mountain reserve have received government development funds in return for preserving the 139,000-acre (56,259 hectare) reserve that UNESCO has declared a World Heritage site.

Writer and environmental activist Homero Aridjis, and the chief scientist for Parks Canada, Dr. Gilles Seutin, also suggested that favorable weather conditions may have helped the monarchs rebound this year.

“Although thanks to more favorable weather conditions along the monarch’s migratory routes numbers in the reserve this season have increased, this does not mean we can ignore one of the main threats to the monarchs now: the extremely damaging illegal logging taking place within the reserve,” Aridjis wrote.

Copyright © The Associated Press. All rights reserved. This material may not be published, broadcast, rewritten or redistributed.

Too nice a day not to hit the local puddles with the boys even with all the other running we had to do. The usual sm bass and pickerel jumped on the single blade spinnerbaits. Finding some jumbo crappies that also wanted spinners was a nice surprise.

Thanks Jeff Shaw. Your place was hopping today. Great to see.

I dabble in numismatics. What year is that half dime? 1866 ?

Thanks. Couldn't see it clearly on a Kindle. I do now on my computer.  I thought you had as nice 250.00 coin there for a moment. Still quite a find. The 1844 O would have been a prize, for sure.