One player has found a way to discourage taking "dives" in soccer ... though I'm not sure it's legal.

Sunday, February 14, 2016: Now this some cold-ass coldness. It was interesting to watch the bay go from ice-free to frozen clean across, though not nearly hard enough to walk upon … so don’t try to go out even a few steps! I had an icy flashback yesterday upon seeing ice hockey folks skating the Cedar Bonnet Island pond. That’s the freshwater-fed water just south of Route 72 eastbound. Skating on that pond-ish water zone dates a long ways back, as in the 1960s and 70s when we would use for skating because the deeper lakes on the mainland either hadn’t frozen deeply enough or hadn’t gotten the municipality's official “OK” for skating. Back in the day, Manahawkin Lake had a red and green flag system to show if the ice was safe or not. When safe, we'd night skate by the light of parked cars aiming their high beams across the lake. 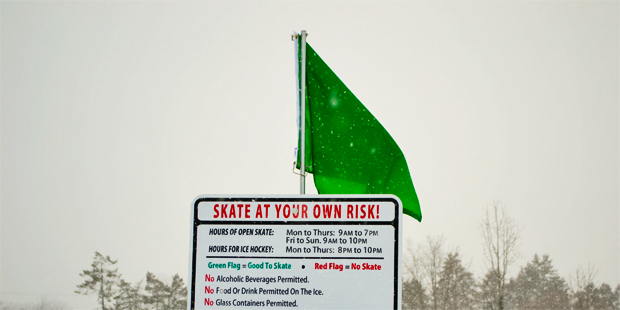 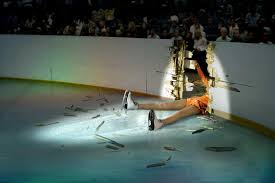 Kevin Scott Douthitt checked in to The Dunes.

Not only did we hit single digits last night but it’ll barely get out of the teens for a high temp today -- and drop to maybe 12 tonight. Then, it'll bullrush into the 40s tomorrow, with rain by evening. When will there be any time for a thaw? Just askin'? 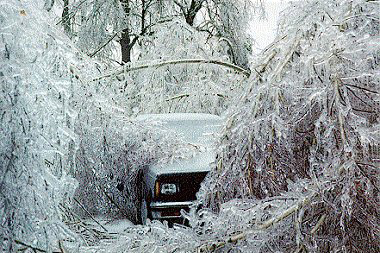 Yes, there will be some snow and sleet at the onset of the arriving storm -- but, that’ll actually insulate the cold in the ground. When the sure-to-arrive liquid precip hits the frozen-solid earth (and sundry objects, like your steps) I can’t see how it’s not gonna become hell on skates out there.

Making matters even icier for us, the precipitation will first turn over to rain along the coastline – jump-starting any freezing rain event ... right here.

To sooth my concerns, I just talked with the very knowledgeable folks at the Weather Service in Mt. holly. They have faith and facts indicating the rapidly arriving warm air from the south will just as rapidly perform an earth warm-up before any serious ice accrues. I guess I feel better now.

Below: My acrylic effort to depict the cold ... abstractly. 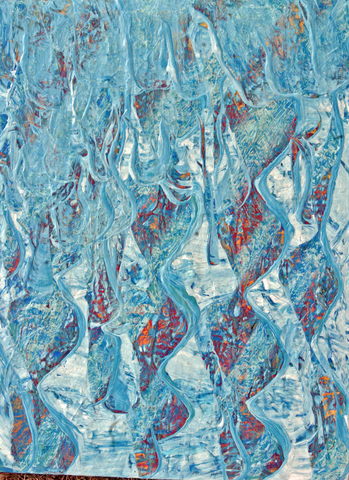 My problem is I’m a "black ice" (frozen asphalt) worrywart, having once gone on a magic ice ride while driving across the country; no damage for me but horrific results for a slew of other motorists. I doubly worry right about now since many folks will be driving home tomorrow after a long weekend.

Let’s hope my admittedly amateur weatherman status surfaces and we end up seeing a low-ice or even no-ice event come late tomorrow. I wouldn't put away the halite, though. 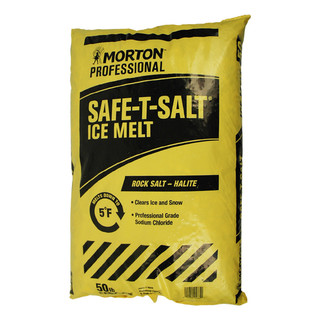 How can I not follow my icy warning without noting there is some bizarre warmth to the west that should get here, eventually, possibly even ending winter hereabouts. I know that's a stretch but I have too get in some exercise somehow. 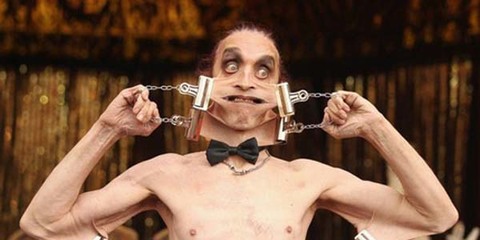 SB FATALITY: Like many/most LBI folks, I was very distressed to hear about the motor vehicle accident in Ship Bottom that took the life of Islander Lori Pelosi.

There is very much a family feel for those of us who live on-Island. Losing a resident hurts. In this case that hurt was made deeper by Lori’s close connection to the tight-knit St. Francis Parish church family. Lori was driving her just-repaired 2008 PT Cruiser south on Barnegat Avenue when she apparently missed a red light at the westbound Rte. 72 (8th street) intersection and drove directly in front of a pickup truck, which was legally traveling westward through the intersection … on green.

The driver’s side impact on Lori’s small car was devastating. Despite heroic lifesaving efforts by local police officers, her injuries were unsurvivable.

The emotional demands after such a tragedy always provoke asking why the accident happened. County crash investigators are looking into all evidence gleaned at the scene. They will likely report their findings, soon.

LOUVERED SIGNALS: Leaving the serious crash-scene investigating to our highly-trained professionals, I did a bit of wondering on my own – bearing in mind the circumstances I’ve noticed with three serious (two fatal) accidents at other nearby intersections on eastbound and westbound  Route 72. 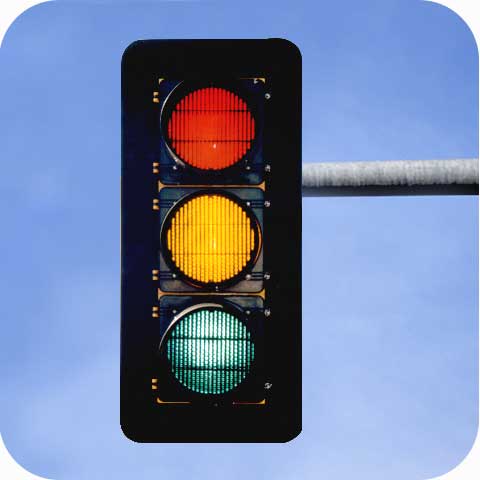 Two of those accidents seemingly involved drivers focusing on traffic signals a block away ... and not the traffic signal nearest them.

In the case of one female driver who survived, she confirmed she was driving Barnegat Avenue northbound and actually ignored the red light on 72 east and instead focused on the green light a block ahead, westbound 72.

A fatality at Central and 72 west intersection involved a dump truck travelling westbound on 72 versus a smaller car, southbound on Central. Based on witness testimony, the female victim drove through a red light without so much as touching her brakes. There was then talk that she may have been focused on a green signal a block ahead, 72 eastbound.

Shortly after the fatality at Central and 72 west, I believe the road department modified the 72 east/Central south signals with what are called “programmed signals” or “geometrically programmed louvers.”

In theory, traffic signal louvers help prevent drivers from being confused over a complex of traffic signals up ahead. “(With louvers) drivers see a full circle of bright projected light when they are within the preset field of vision,” per a company that makes them. Simply put, the nearest signals stand out will more distant signals aren’t as noticeable.

I have no idea if such louvers work, especially with the latest LED-lit signals, but they prove that highway safety folks recognize the possibility of motorists misreading the lights at two, consecutive, signaled intersection.

The intersection of the recent accident has signals within easy eyeshot of each other. Yesterday, I parked and studied the signals there, confirming: If no Barnegat Avenue traffic is waiting to get through either of the 72 east/west intersections, a north/south-facing signal doesn’t cycle to green. The single changes are based on the traffic-detection equipment at the intersections.

I watched as the Barnegat Avenue/72 east intersection signal -- with traffic waiting -- turned green, while Barnegat Avenues/72 west, without waiting traffic, stayed red. Again, I know of one confirmed case where a driver misread the block-away green and blew through red light meant for her.

Please understand, I am NOT (!) suggesting this is what happened in the case of this fatal accident. Hopefully, investigators will pin down the reason Lori missed red light. I’m just so sickened by it – and other LBI Route 72 (8th, 9th streets) accidents and fatalities -- I’m groping for any ways to make those intersections safer.

To be sure, I never overlook the fact Route 72 east and west are the two most travels roadways on LBI. What’s more, they are 40 mph in both direction – with eastbound now driving a lot faster, as folks finally get free of the bridgework and are seemingly making up for lost time. Also, I know loads of other folks voicing identical concerns to mine, among them Ship Bottom Councilman Eddie English, who has long sought better safety signage along outgoing/westbound 72. His glass company is right there at the Barnegat Avenue/Route 72 east corner.

Finally, there is absolutely no controlling or accounting for distracted driving.

Came across this pic of a late-great buddy of mine, John Hagaman, taking a quick glace over at me while chasing a blitz. Notice the bunker-blackened water. 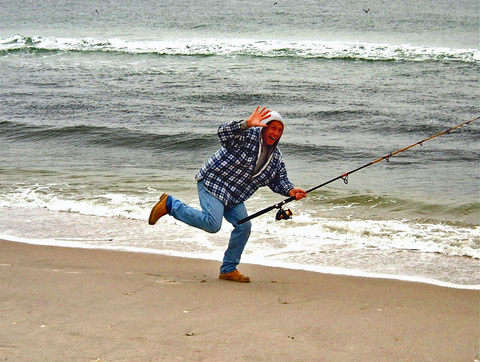 ‪‎great‬ day fishing with captain Dan yesterday!! To bad all the fish we caught were out of season and had to go back!
‪