I think the wide receiver on the right left too early ... your thoughts . This actually happened.

Remember that December day on the beach when ... ? Sunday, December 13, 2015: Driving the beach, I passed a number of folks sunning. Yep, they had their summer chairs out there and, although they were well-clothed, they were shut-eyed and worshipping a sun at its lowest point on the southern horizon. That comes with the shortest days.Surfcasting pressure is damn decent for mid-December, though even the skate, much less stripers, weren’t biting for the few anglers I chatted with.

We are still seeing that never-ending three-foot groundswell.

The ocean is not only picture-clean but has hit 55 degrees. And I took temp readings at a number of beach sites so that’s not just not some sort of one-stop aberration.

Way earlier in fall I was saying the ocean is kinda warm and had folks arguing it was actually closer to normal. Maybe so, but mid-50s in mid-December? Come on, there’s no denying that’s a freakification of the norm.

The late-running water warmth could play a huge role in any winter storms -- certain to eventually come our way. Any storm-related onshore winds, like out of the famed northeast, will instantly jack the air temps way above snow-degree. Hell, during a larger storm that ocean-warming effect could extend all the way to eastern, Pa, including Philly. STRIPER SEEKING: After this coming week, I get a slew of vacation days. That’s when I’ll really put in late-day schoolie searches. The last school bass of the year are almost exclusively a late-day bite, though the way IBSP is rocking the rockfish, they could see daylight schoolies from now right into the New Year’s partying. 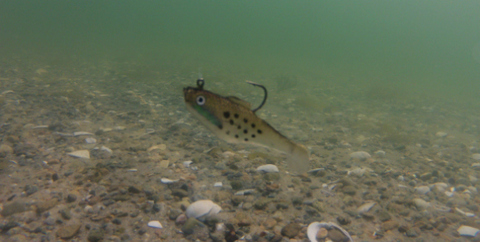 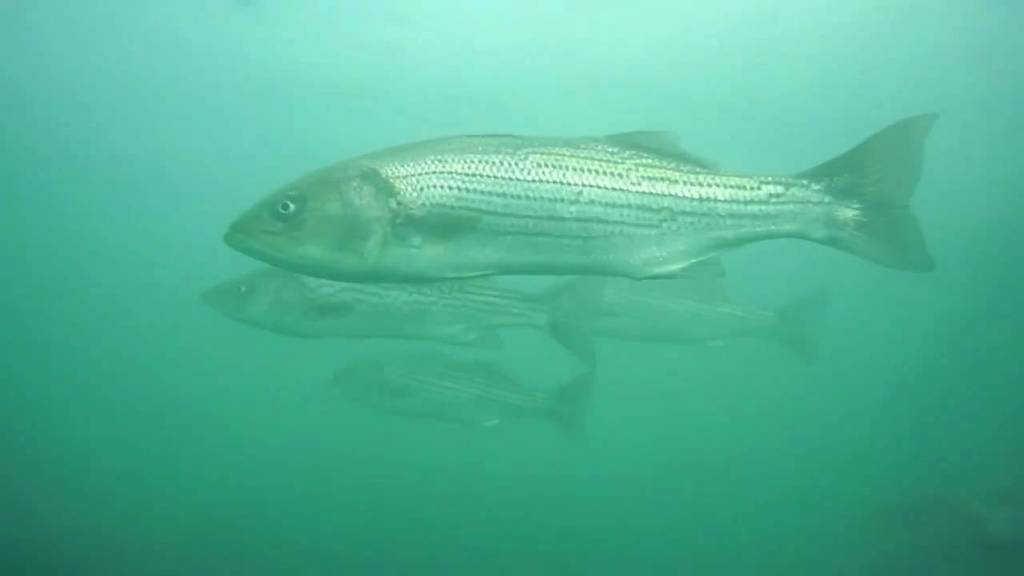 I got in touch with some IBSP regulars (through Facebook) who told me have had utterly epic angling this fall, dating back decades for comparison.

No I’m not rubbing it in for us on LBI. We have simply been so forsaken by that just-north biomass that one has to think there is more than just happenstance in play.

First and foremost, they’ve been neck-deep in baitfish up there. We lost even our spearing and rainfish weeks before they usually leave. I haven’t seen a peanut bunker in weeks while the just-north gamefish have been so stuffed with them. Name one fall we didn’t have clouds of peanuts skirting out shoreline.

HOLGATE HAPPENINGS: The erosion of early-on Holgate is not just worse than ever but when each new section of sand disappears from side-ass winds, nary a grain comes back. Usually, after a blow, there is some sand recovery. It has not been happening from about the 2,000-foot mark all the way down to 5,000. The main reason is the lack of littoral sand from the beachfront north of parking area jetty, locally known as Wooden Jetty.

As to Holgate getting cut asunder all the way over to the bay, that’s imminent by any measurement. Ocean and bay meet with even astronomically high tides – even without storms! The one saving grace for the erosion zone, real-estate-wise, is a fairly sturdy sedge island just to the west, barely into the bay. That grassy sedge is actually preventing Holgate erosion caused by winter’s truly wicked west winds. If that wasn’t there, we’d could have an equal and opposite eating away of Holgate from both the east and west. If that happened, kiss good-bye to public or buggy access to most of the Holgate Wilderness Area. Wouldn’t it be a kick in the ass if only weekend boat people get to use that two mile stretch and tip? Territorially, there could even be a debate over the Forsythe Refuge are owing its own island. On maps, the Holgate Wilderness Area is, legally, a contiguous part of Long Beach Island. All Forsythe would own is the small section of land still attached to LBI. By the by, that’s not just my read but that of a professional. I’m hoping Forsythe, therefore, might want to climb aboard the “Save the Holgate Wilderness Area” effort.

As to that far south tip as it now stands, it is fattening like a lady carrying triplets. The beach, if you can call it that, has grown considerably in only the last month! I’m far from an ancient, but I have never seen that much sand at the far end. Below is video evidence of what has to be 200 yards of open sand, buttressed to the west and north by those growing dunes, easily approaching 40 feet in height at the upper most peaks.  I’ll repeat that geologically speaking this is surely how the now vanished Tucker’s Island first formed, hundreds of years back.

Here's a look at the expanding universe at the tip of Holgate:

You’ve likely heard that the replenishment sand for Holgate’s inhabited beach sections is being put on hold by Great Lakes Dredging, pending a successful uproar from the populace, state forces and even the feds. Who could have ever guessed that an extension granted the company a few month back, allowing the project additional time to be completed, would lead to this, well, time betrayal? Methinks there was full knowledge – and a game plan -- on the part of Great Lakes when seeking that extension.

DON’T SHOOT – OR HIKE!: It’s shotgun season out there, which means no one is thoroughly safe when in the outback. Admittedly, some in-woods, designated no-fire zones are relatively buckshot free but I don’t care how well posted the woods might be or how much you’ve covered your body in orange or how many human noises you make to alert hunters to your presence, there could be someone armed with a shotgun ready and willing to mistake you for a deer.

I purposely use the ambiguous word “willing” since it can be taken in a few ways. I always fret that there’s just one psycho out here silently itching to see what it would be like to blast a human … knowing the “mistook him for a deer” defense might be available. I know you’ll read such an intentional shooting as highly unlikely, you won’t be quite as cocky when you’re hiking in the woods right about now.

I saw a spooky shotgun scenario near SRHS and SRMS last week. A group of afternoon hunters were doing a deer drive through the woods adjacent to the schools’ soccer fields; north of the middle school campus and Cedar Bridge Road, near the clothing donations box. It was about 3 pm. They were driving from the fields toward the fairly-famed runner’s road through the woods -- where Southern athletes, alumni and the public run every afternoon. While the designated shooter was facing away from the running road -- and back toward the fields -- there is a narrower offshoot of that running road that lies parallel to where they were hunting. It heads back toward the fields. Their hunting action was way too close to the kids by my thinking. I know the area inside out.  They were possibly legal distance from the school building, if you don’t count the athletic fields as an extensions of the schools. No, I didn’t call the cops or anything. I support deer hunting to cull the stock. I just think they really could have chosen a lot safer area to do a deer drive. 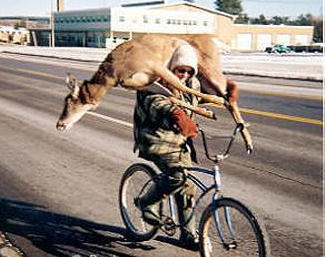 Generally women in combat works for me ... providing they don't throw like, well, a girl ... 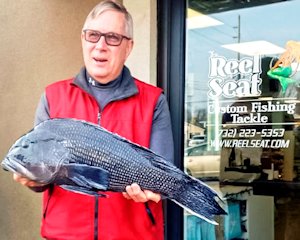 The string of new state and world record fish landed in the northeast in 2015 just keeps getting longer, and the most recent catch to make news is the massive 9-pound black sea bass that was landed by angler Steve Singler on Saturday, December 12.

Steve made his way to New Jersey from his hometown of Philadelphia, PA to fish aboard the VOYAGER sailing out of Point Pleasant, NJ for their Jumbo Sea Bass & Porgy trip. The massive knucklehead taped out at an impressive 27 inches in length, sported a chunky 18.75-inch girth and was weighed on the certified scale at the Reel Seat in Breille.

Once certified this fish will eclipse the existing state record of 8 pounds, 4.5 ounces which was landed in 2010 by Andrew Meredino while fishing off Cape May.

SUBSCRIPTIONS
Order Holiday Gift Subscription
The Fisherman magazine subscription makes a great holiday gift for your favorite fisherman. Each weekly issue offers content from the highest authorities in sport fishing that your gift recipient will enjoy all year long.


Dr. Luis Mispireta of Stevensville, MD is the new state record-holder for bluefish in Delaware with a 24.8-pound gator weighed in at Lewes Harbour Marina in Lewes, DE on November 16, 2015.

Test fitting props prior to adding clearcoat. My ten pilots should have liftoff shortyly. Grampa Joe's Lure Co Sinister Props. One and done....

EVERYONE is fishing this morning with this beautiful weather. 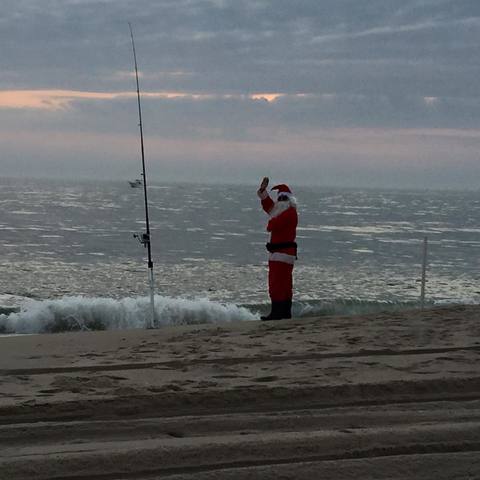 Just incredible!
Kane Bounds w
JimmyBrooks Lee
Will Hoffman all of us with double digits. 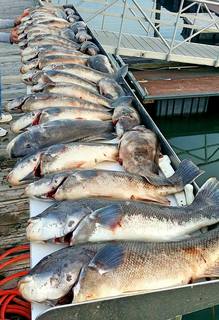 Yesterday's report. 2 bass and 1 fluke. What will this morning bring??? 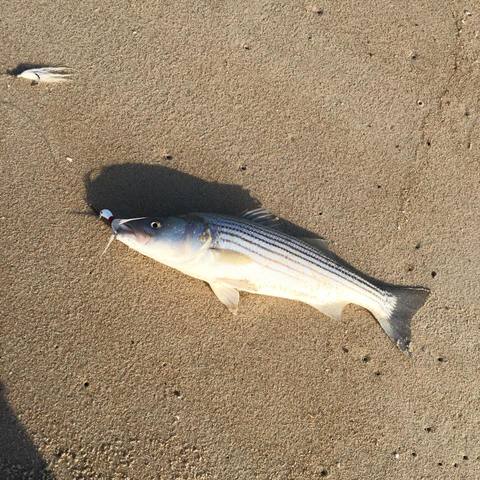 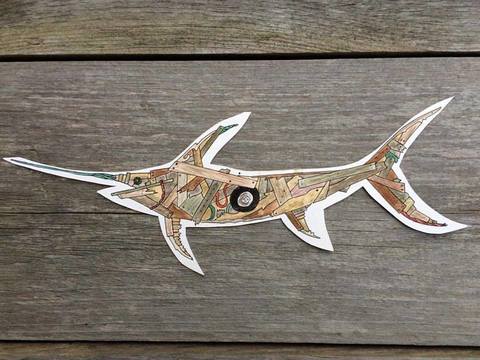 I guess it was bound to happen sooner or later: I caught the same fish I tagged a few weeks ago.

The 90 is purely used as a teaser. PM for more details!!! Great skipjack or bonito profile. Size 50 great for tuna and wahoo bullet. 70 blue marlin candy.

Got the Black-Haired Demon out on the ocean today (the boat, not the artist). Took a while to find the bait, but eventually found schools down deep that we believe were bunker. We jigged and trolled. Managed to troll up a 24 inch bass. All in all a good day on the water with my brother and it was unique (and pleasant) to be in a center console in December without freezing your #### off. I didn't even wear a jacket today. Hope the weather continues...

Oh, and we had a camera in front of the umbrella rig that fish hit, but the water was too murky down deep to see anything. 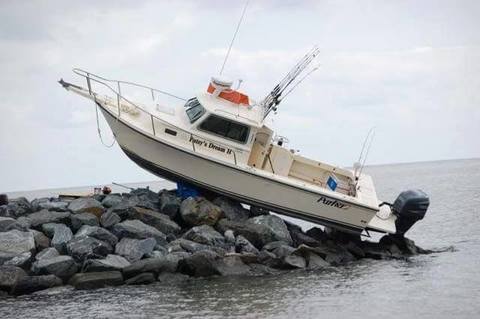