Sunday, April 03, 2016: Pretty impressive gusts this early a.m. Saw one top 54 mph. I also saw a skim of ice on a backyard bucket. Combined with other freezes of late, the odds of any transplanted sprouts making it outside have melted away.

I saw Stephen Lee of Lee Brothers Farms in church today and he said the Chatsworth cranberry bogs are still “flooded” – for the winter -- and won’t be harmed by the way-below-freezing temps in the Pines.

Other agricultural crops, especially fruit trees, might not fare as well. I saw many blossoming a couple days back.

I worry most about my semi-wild blueberry fields. A few years back, cold spring conditions, identical to now, left my secret bushes, right off Rte. 538 (Lacey), literally fruitless. I have hand-harvested them for over 20 years. The harvesting actually keeps the formerly maintained bushes from going wild. That recessive process eventually reduces bushes to bearing small, barely edible fruits where they once offered big and plentiful crops.

Here’s a video look from a decent (not bumper) year of blueberry picking. Sorry but the sound is messed up. https://www.youtube.com/watch?v=Yk-Yauq8L3Q.

We have new moon and seasonally-strong tides this week, Any winds – which will be all over the place this week – will have the tides running both much lower and higher of averages. If you have your boat in already, tie-up according.

As to fishing, I've been asked to back off a bit from hyping Graveling Point, due to crowds. I have gotten related reports from boats working the Great Bay area and occasionally nabbing a keeper bass. However, the winds and weather won't soon be allowing much of a chance to launch ... possibly the entire week.

There is some early white perch to be had locally. Ask your local shops where to fish -- since I don't want to dare give out the few prime sites in Stafford. We could use a banner perch year to show there isn't a problem with the fishery. i know of some fyke netting of perch but that light commercial fishing shouldn't be hitting the stocks the way they seem to be getting hit ... and greatly reduced. I do know from experience that white perch are highly cyclical. So let's see a cycle upwards. 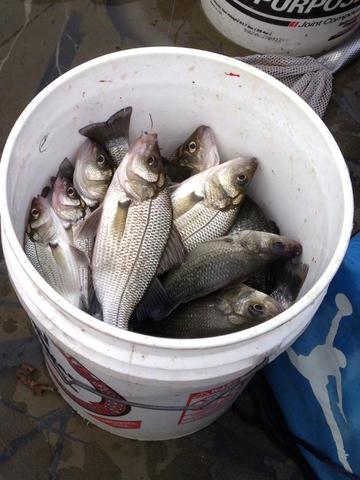 WHALE DIE-OFF FROM JONAS?: In January and February, 13 doomed whales surfaced near the North Sea coastal resort of Tönning, Germany. All eventually stranded themselves and died from asphyxiation due to their own immense body weight pushing down on internal organs.

The Tönning whales brought the 2016 number of sperm whale beachings in Northern European to 29. All were younger “bull” males, of approximately the same 12- to 18-ton size and between 10 and 15 years of age. Experts feel they were from the same group. 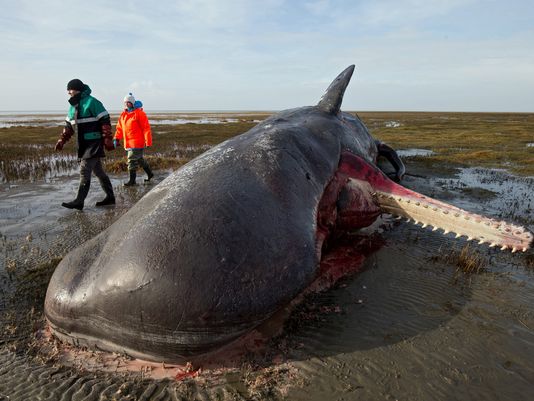 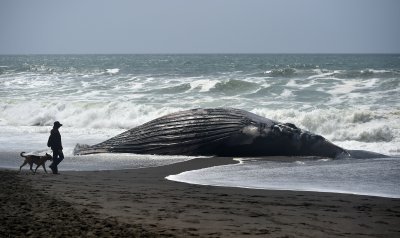 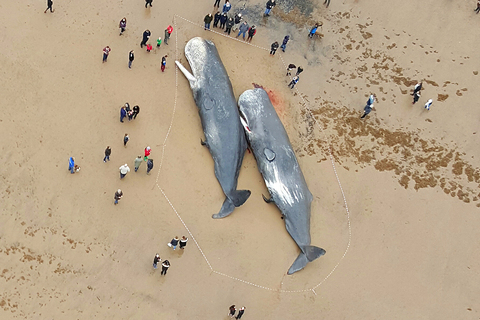 A bit ironically, the Tönning strandings were within eyeshot of Multimar Wattforum Centre, a highly whale-appreciative information center for the Schleswig-Holstein Wadden Sea National Park. The necropsies on the whales were performed there.

During the forensics-like investigation into the insides of the whales, scientists first found disturbingly unnatural stuff within four of the 13 whales.

“Large amounts of plastic waste were found in the stomachs of the sperm whales, including fishing nets, parts of a plastic bucket and even a plastic car cover. Although not the direct cause of death, vets suspect that the whales would soon experience major health problems as a result of this toxic waste,” reported the global conservation group Whale and Dolphin Conservation (WDC).

The ingested fishing net, made of a cloth material, was an indigestion-inducing 13 yards long. As to the whale that dined on a “car cover,” it had eaten a 27-inch wide chunk of what is technically a motor cover – an engine-sized, under-the-hood part, common in European makes of cars. The bucket “parts” were likely from a blue, five-gallon bucket. “These findings show us the effects of our plastic society: Animals inadvertently take in plastic and other plastic waste and suffer, and at worst, starve with full stomachs,” said Robert Habeck, the region’s minister of energy, agriculture, environment and rural areas.

Although the ocean plastics and human junk angle ruled the headlines in the wake of the necropsies, a far more complex – and natural – cause eventually came to the scientific forefront. And it pointed back to us, albeit in a stormy and circuitous connection.

Per a report in ecowatch.com, veterinarian Ursula Siebert of Germany’s Hanover Veterinary College, theorizes that the fates of the whales were sealed by fierce winter storms in the mid-North Atlantic. Those are the self-same storms that first ravaged us, including our famed Jonas. OK, so maybe that’s an odd connection.

Many a storm that “explodes” off our coastline is simply warming up, seldom dying of boredom out there. We just routinely stop watching storms after they fall off our radar. As proof, few of us saw the express.co.uk headline, “Weather: WORST storm for a CENTURY hits UK as Storm Jonas brings torrential rain and gales.”

Yep, that was our Jonas. Just imagine the oceanic mayhem wrought by Jonas during his 3,000-mile trip from here to over there.

When open-ocean storms rage across the waters of the North Atlantic, one species that is heavily bounced-about is squid. Shoals of them can get inexorably pushed eastward by waves and currents. This squid roustabout weighs heavily upon sperm whales. Squid is their undying BFF – as in best food forever.

Per Siebert, powerful winter storms likely pushed tons of squid eastward, toward Europe. Hot on their tentacles were more aggressive, often younger, male sperm whales. In the bitter end, their eating aggression came back to haunt them, as they pursued the squid into the North Sea – and, eventually, onto the shallower water of the Euro coastline.

Contrary to initial news reports that the beached whales had starved, some due to trash-filled bellies, the whales were fat and fine … just dead.

Siebert reports, “The initial impression is that these sperm whales were healthy animals, showing no signs of injury or infectious diseases. The animals were well nourished and mostly had abundant cuttlefish beaks in their stomachs, indicating that they had recently foraged near the coast of Norway.”

Now, I get to add a bit of scatological climatology, by further quoting Seibert. “The migration route of the sperm whales could have been altered by human activities, a regional change in prey organisms, or other environmental factors. Temperature shifts in seawater might be the root cause …”

I’ve long proposed that an atmosphere in pollution-based flux will loose epic storms, based on highly-enhanced evaporation and a general sky-explosiveness from heated air. Seems sperm whales need to run for cover … but not into the North Sea, guys. 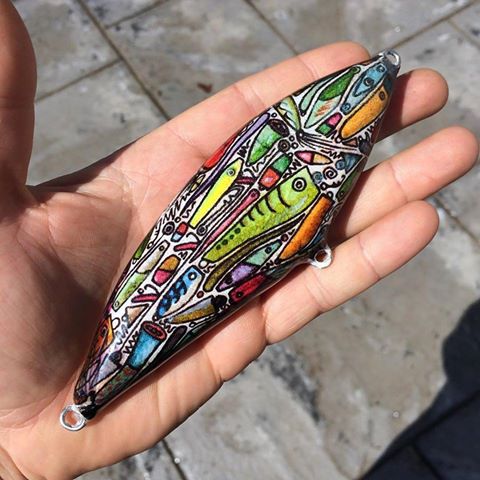 Staying on that theme ... 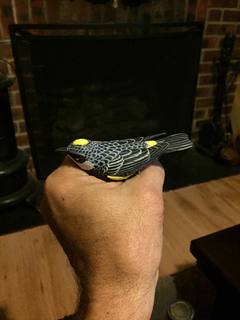 O man, this is why I love those carving shows and supporting local artists.

S&S bucktails would like to welcome
Chris Bender to our Team, a great addition TEAM S&S bucktails! 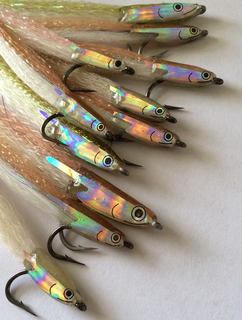 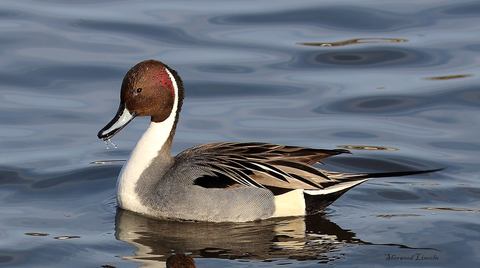 It's tough to find a wild Northern Pintail Duck, one of my favorite !

Pops, a calm winter day on Egg island retrieving decoys. He owned the 7 acre island. Building, installing and maintaining 6 gunning boxes and the island itself was a year round endeavor. Good thing clamming on Sunday was illegal or we'd have been out there at night. With the crack down on feeding and the state claiming rights to everything tidal he was forced to let the state "buy" it after declaring it a future sewer treatment plant site for LBI.. Now it just sits slowly eroding to the elements and boat wakes. From the causeway east look south it's the big island between the point of beah haven west and LBI.

Salmon Tag, and countless others. My most recent Bay of Fundy tag I retreived this fall.