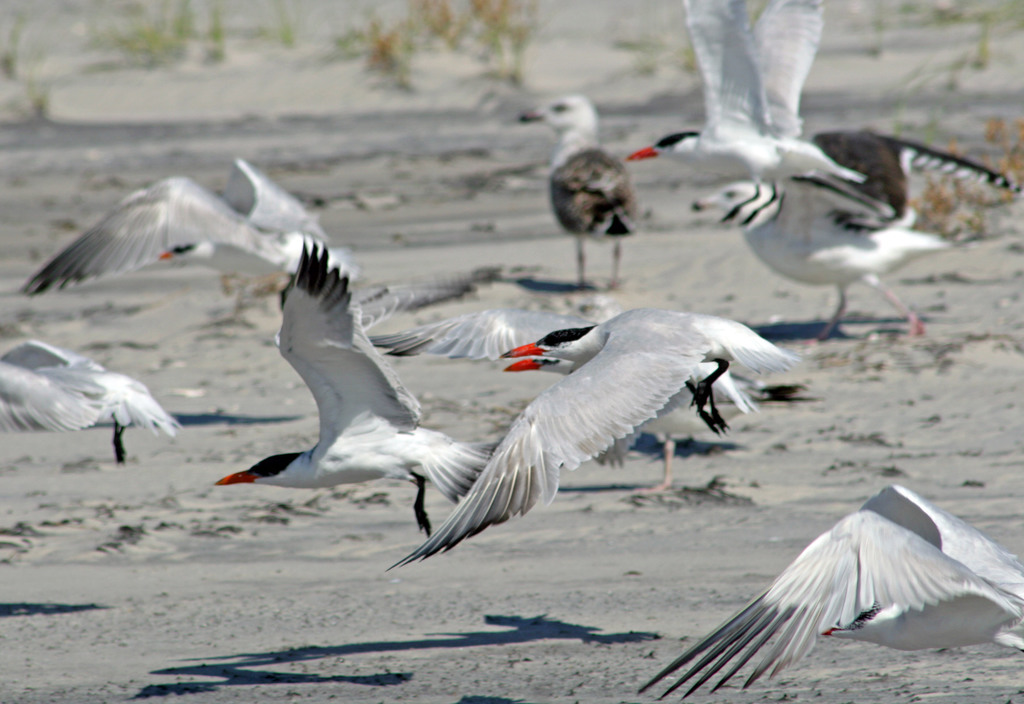 Saturday, September 22, 2012: Some folks were asking for the raw video footage heading to Holgate Rip. Here’s a recent YouTube. I may do some later today.  https://www.youtube.com/watch?v=wR_4WoF7H3s .

As for the day, we finally have a minor complaint. The wind has turned it up a big notch, from the south. Of course, if you overlook that, we continue a September to remember.

I had a couple skunkish bass report – along with some brighter ones. I relate to the surf pluggers who found nothing but tailor blues. I’ve had that myself. On the other hand, a few chosen folks have already nabbed a couple/few small bass, not only early a.m. and late-day but also higher tides, high sun. Again, medium- to small-sized popper working decently.

I’ve noticed that anything that dives is just not convincing the stripers. Makes sense when they get a good look at an artificial when juxtaposed to all the live bait zipping around; too much of a tip-off.

I have done well with blues and weaks using a Rat-T-Trap. I think that has a lot to do with the “buzz,” they make when vibrating against the current. That noise is likely similar to the electronic emissions from a terrified baitfish.

The fluking continue to falter, both boat and beach. Again, it’s positively not over for the flattie presence. It’s conceivable they’re filled to the gills on mullet, rainfish and spot. Those being caught are even fatter than they had been a few weeks back. I use the filleting technique that removed an entire side at a time. Please watchhttps://www.youtube.com/watch?v=kZioI3b5KBQ -- though I’d slow it down to avoid some of the meat missed by not following the bone structure a little closer.

Note: I make a lot of knives and even knife blades (from raw metal) and I want to put in a good word for the little device that filleting gal above uses. Many folks think those one-piece, pull-through, plastic knife-sharpening contraptions are toys. Absolutely not true.  Better ones can put an edge on just as quickly as she showed: one pull through.

It’s taken me years to prefect sharpening a blade with a stone. If you give an edge even the slightest bit of a wrong angle with stones, you’ve not only actually dulled the blade but you’ve ruined the continuity of the blade’s cutting edge, which will eventually form dips in that edge, thusly requiring a total reshaping and retempering.

Here’s a nice 5-pound fluke caught by Tom B. at the back cut in Holgate – pre-war (see below). He caught it on live mullet. 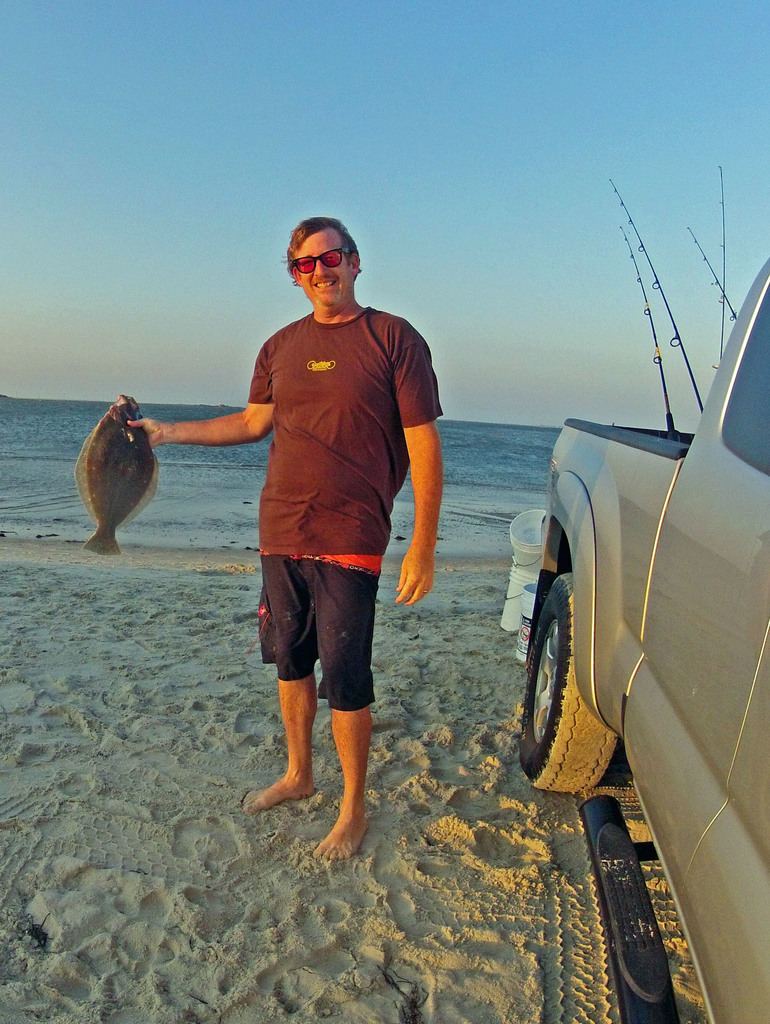 BACK CUT BRAWL: Went to Holgate late today to find a major gathering packing it in along the cut in the back. There were a dozen buggies and five or six boats anchored on the beach. The boaters had a typical beach party going.

Sadly, the two user groups failed to play nicely together. A fairly fevered fight broke out between them, leading to some swings and accusations of sucker punches.

By the time I got on-scene (I had been fishing nearby), the main punches and shoves had been executed but it was still easy to tell the feuding parties, based on in-your-face scream-offs -- during which the gals with the boat troops loosed some unlady-like language, provoked by some equally ugly wordage on the part of the fishing segment, consisting of generally younger guns. Some pretty vile verbal volleys were exchanged. I blushed – as I got my GoPro going.

The guys on the boat side were serious provocateurs. In fact, based on a load of witnesses I trust, an older gentleman on the boat side threw the first punch – allegedly suckerish. He was eventually thrown in the drink.

The shout-off went on as the boat folks packed up and left the beach.

I GoPro-ed the entire final portion of the wildness but missed that main attraction. I only got the obscenity push-and-shove on video – not real exciting to be honest.

I did my small part to lighten the air by trying to joke around – after-the-factish -- with both sides. I knew just about everyone on both sides. I’ve seen that “lighten up” peacekeeping method work before, though it wasn’t overly effective today. Still, both sides backed down just long enough to allow the warring factions to separate – albeit noisily.

While I had a hard time telling what the two feuding parties represented, it seemed like mainland versus Island and also boat versus buggy, even though there were mainlanders and Islanders on both side.

There have been conflicts at the back cut before in the past but this one somehow escalated.

Here’s where I catch slack but this entire scene, albeit unsavory, was just a case of “folks will be folks”. Fights can ensue. I much prefer some socks and shoves and swears as opposed to guns and knife gouges. My main concern was a few younger kids being exposed to the vile verbal bombs. I’ve always hated the concept of collateral damage. In this case, both sides were free-firing upon young ears.

I’m debating what to do with the videos I shot. Post the video. Maybe people will realize how stupid they look when they act like that. Alcohol involved im sure. Not judging just saying.