Saturday, November 15, 2014: I drove, I fished, I did not vici. I had one stinkin’ hit for a helluva load of throws. However, the wind-chill had me bailing out of spots before I could give them an honest go.

In my daily beach travels, I talked with a goodly number of numbnuts – meaning that in the literal sense – and only heard of two bass caught by dozens of surfcasters. The beach fishing pressure is way lower than I expected.

At the same time, the boat fishing is mighty brisk considering the beyond-brisk wind/temp conditions. Saw a lot of herded up boats a couple miles out; lumps areas. In fact, I binoc-ed a few vessels drifting toward the black magic three-mile striper limit.

Catch-wise, boat radio chatter leaked out word of a couple/few nice fish. Eel-appeal worked on one successful boat. I’ll pass on more when and if I get word from charter and/or head boats. Folks love reading about how the pro boats do, so please email or Facebook me any catch info (jmann99 @hotmail.com.) 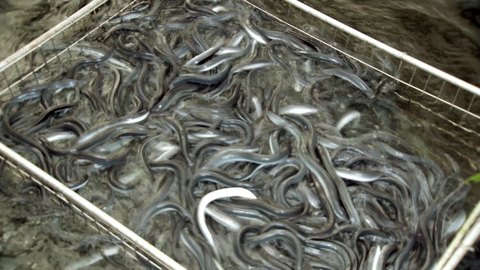 The west winds are holding the tidal swings way down. That means walk-ons and buggyists will have no water-rise headaches today or tomorrow, even though a big chunk of the daylight will be during high tide times.

I’m one of those who have better bass luck during low and just-raising times. Again, that has to do with my penchant for plugging/jigging from atop jetties. Ninety percent of my best hookups are from atop rocks. One hundred percent of my slips and falls are also there. That’s commonly referred to as a tradeoff. As you know the cold will continue into the next week to 10 days. Last night saw the first ice crystals on LBI. I know the mainland had some frost earlier this season but I keep some standing water outside to note that first skim ice. There will be more light ice to come. But don’t bank on ice fishing by Christmas. I still see wild swings in temperatures, especially in December. Weird mildness could easily be in the mix. Holgate continues to confound. I have had a modicum of luck at the back cut but the folks who had been fishing the frontbeach have pretty much bailed out of boredom. I ran into Wilber, who swears he’s gonna get a Holgate striper of note. Of course, he was leaving the beach after angling with bait for hours on end and only skates to show. I did get some cool insights into how he makes his world-class sputnik sinkers. He now has customers writing him from Ghana. Sorry, can’t revel any of the cool component parts he uses but it’s apparently a chore just tracking down the best materials. I told him he needs to initial his sinkers to add the final touch of art to them. 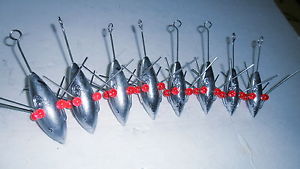 There are small orange markers (tiny flags) on the Holgate frontbeach. I think they’re part of the Holgate cleanup process now going on (Below 1). There are also some folks back within the refuge studying something Below 2). 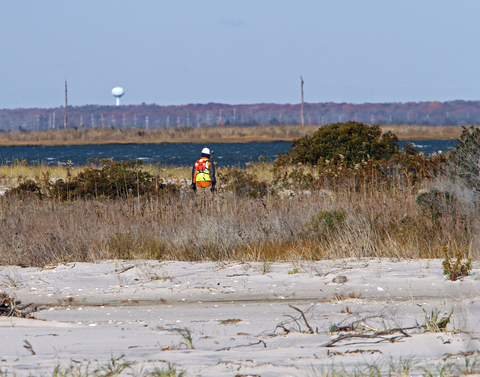 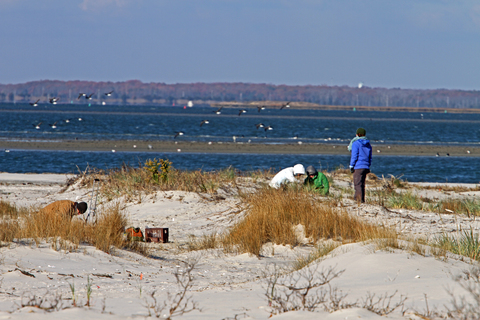 Interesting observation is a layer of sedges material – likely from a very long time ago, when the current portion of Holgate was in the bay. I’ll be looking at the exposed bank tomorrow at low tide to see if I can get some age indicators, via seeds, plant material and such. The tough read is the seed of the common reed, Phragmites australis (P.a.). Many scientists have equated all common reeds as an invasive subspecies, introduced from Europe. Not so. I have seen  sedge material from a 1,000 years before white man’s arrival and there are P.a. seeds heavily present – though nothing like nowadays. The European strain of common reed is way more aggressive – as we’ve seen, especially in the past 100 years. 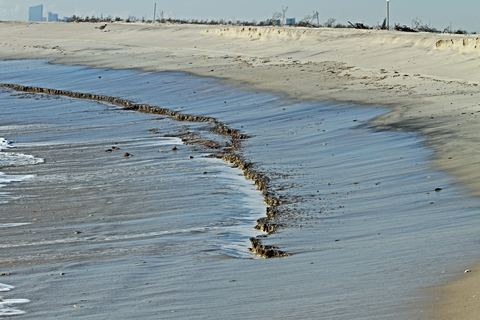 By the by, the indigenous P.a. is now sometimes given the subsp. americanus. That said, I can’t even remotely tell the difference between seeds of the Euro P.a. from the P.a. americanus. Also, it is impossible to distinguish subspecies based on remains of the reed’s famed rhizomes – underground roots which can go down six feet and extend outward even farther. Nonetheless, older sedge samples – pre-Columbian -- can be determined by the minimized representation of reed parts and a higher presence on other grasses, which dominated before the more aggressive form of Phragmites took over.

I know that’s more than you wanted to know but there could be some very cool info in this just-exposed lens of sedge material in Holgate.