Below: in Holgate, "Those signs can't possible mean us." Photo by Matt Reitinger‎ 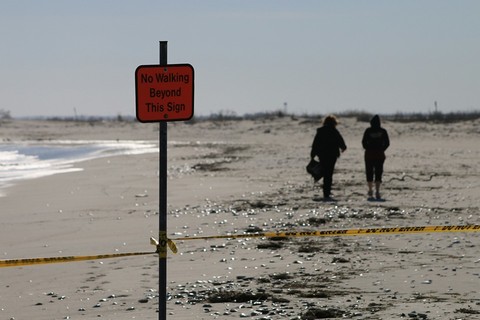 Saturday, April 16, 2016: I was forced to sacrifice a goodly chunk of the day to transfer the contents of my longtime storage unit into a newer, larger unit. They should be called "Stuff Units."

Going through the long tucked-away goods was like meeting up with old friends. Even I have to admit I’ve overdone it with rods and reels, most purchased at auctions – usually an S-load at a time.

I have 21 green Penns, many of which still have the original grease inside. Total reel count is well over 100. Hey, I'm going to get around to fixing them ...

My rods are all over the low-quality place. I never met a rod I could throw away. I have slews of them, some oldies made from the old transparent fiberglass -- actually quite attractive when the sun shines through them. At the same time, they’re so slow (rigid) they can second as harpoons. I also have so many tackle boxes I actually gave away half a dozen of them today – and I still have enough to house a tackle shop worth of plugs, jigs and rigs. This all stems back to when I was a kid and my mom would say, “You already have one of those,” and I’d say, “Yes, but I don’t have two or more.” I’m not a hoarder. I’m a prolific collector.

It was during the tedious shift from one storage unit to another that I got three different calls/messages about the return of last spring’s big blues. I say last spring’s because virtually nobody can recall such an Aprilish rush of chopper blues like last year. And today was just how it began … as in, out of the blue.  There were big bluefish semi-simultaneously taken from Cape May clear up to Monmouth. The bayside was our main showing, including Graveling. I’m sure Manahawkin Bay will be holding them for many nights to come. 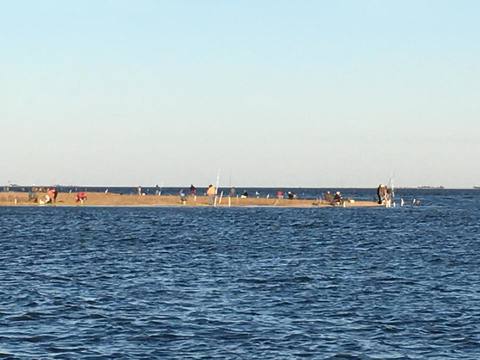 Here’s a look at what might be the fishing walkway over the Causeway trestle bridges. The two bridges eats of the big bridge should be open fairly soon, per the NJDOT. I’ll be among the first to try them out, just to see – unless I see one of those famed and obnoxious signs “No Fishing From the Bridge.” I don’t want to jinx it but I doubt such signs will show. We were told at various meetings with the DOT that anglers would be accommodated. The meaty guardrails indicate there is protection for someone or other.

Below: A quick glimpse of the new public walkway/bikeway over the Causeway's trestle bridges. Notice the heavy-metal guardrail. These bridges should be fishable ... eventually. The walkway is only on the north side of all the bridges. This is the second bridge after leaving LBI, toward Dutchman's. 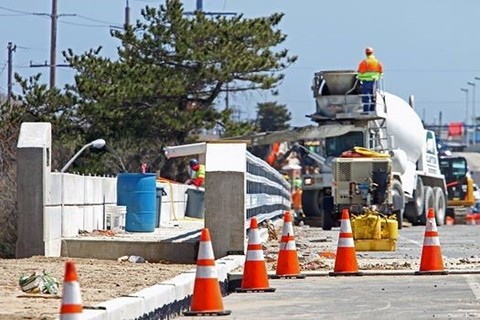 Along with the blue cruise are small – what I’d call eater-sized – black drum, twixt 10 and 20 pounds. The drum are going for the typical clam gobs, though one fellow has taken them on green crabs left over from blackfishing. 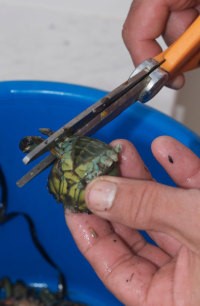 Quick eco-word: Do not release unused green crabs alive. They're non-indigenous and already messing up the ecosystem in some bay areas. (See below)
I checked a couple far backbay creeks for herring to photograph but to no avail. I did a couple blind net casts –NOT for forbidden herring – and nabbed a couple very small white perch.

European Green Crabs are known to be voracious predators, preferring bivalves and other infaunal organisms, but are also known to prey on other species of crabs. They inhabit a wide variety of habitats and environmental conditions, and appear to be responsible for broadscale changes in invertebrate communities, including commercially important species. In addition, green crabs may have a myriad of effects in vertebrate and invertebrate populations. Our research focuses on the direct and indirect effects of green crabs on invaded ecosystems.European Green Crab ( Carcinus maenas) is a portunid crab native to northern European coastal waters. In the early 1800's, it appeared on the East Coast of the United States where it successfully extended its range as far north as Nova Scotia and as far south as Maryland. Later it successfully invaded the southern coast of mainland Australia, first reported in the early 1900's, and in 1993 colonized the island state of Tasmania. In 1989, the green crab appeared in San Francisco Bay and proceeded to invade coastal embayments to the north and south. Japan and South Africa have also been recently invaded, although genetic analyses indicate that these may include some hybrids among two species: C. maenas and C. aestuarii. The possible mechanisms (or vectors) responsible for these green crab invasions include dry ballast, ballast water, transfer with aquaculture species or release of teaching material. 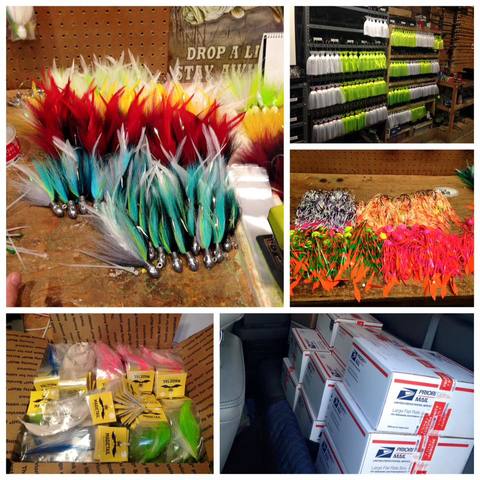 Dante Soriente with Bryce Poyer and 2 others. 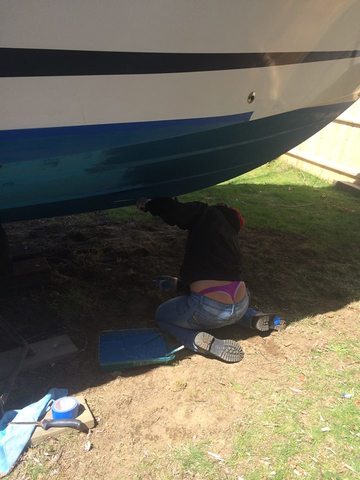