Being a cop isn't easy, like when your favorite AC/DC song is playing but you have to pause to officially wave to folks on the street.

Saturday, April 09, 2016: Just got word (midday) or snow coming down up North Jersey way – right where I had thought about shark-toothing, possibly this weekend. As many a Jerseyan knows, we have one of the better states for sifting around for Cretaceous fossil shark teeth. Many of us first went to places like Big Brook, Monmouth County, on school trips. Here’s a real nice write-up via Fossil  Guy at http://www.fossilguy.com/sites/bbrook. 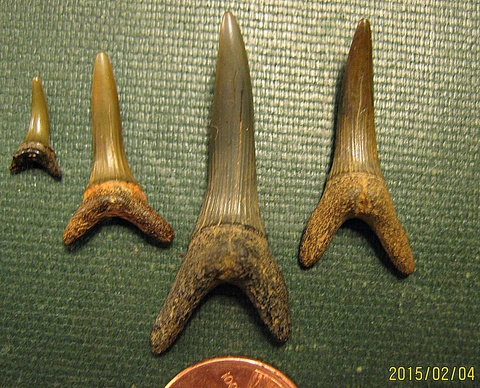 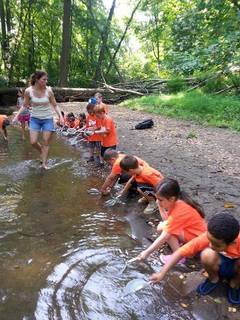 My digging spots are a lot more subtle – and more complicated -- than easing into state-run “sharks’ teeth” parks. My favorite sharky site entails first stopping and checking in with Mr. and Mrs. Nicefolks (uh, not their real names).

After once being verbally put-upon by Mr. N., he calmed down over my blatant trespassing. We chatted and realized an LBI connection. Friends forever after.

A SIGN OF THE LAW ... OR NOT: The Nicefolks’ land is legally posted, perfectly, under New Jersey’s ultra-strict posting laws. That's a rarity. Few people know this (short of rural landowners), but for property to be legally off-limits to the pubic it must be fully fenced in (rarely any more) or the land must be clearly marked with legal signage, i.e. a sign placed at least every 150 feet, mounted on dedicated poles/posts (not telephone poles), signed (with phone number or contact info) and updated (re-dated) annually. What's more, signs must fully surround the perimeters of the property, as in: 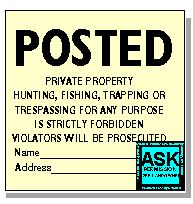 You can’t post signs only along a road-front or publicly accessible areas. Again, signs must encompass the property, even in the rear. If not, the onus falls on the property owner to verbally (hopefully, in a friendly way) let any wanderers-in know they’re on private property.

This is not to say that land owners don't have rightful rule over their lands, they simply have no legal recourse, trespassing-wise, should people (non hunters) unknowingly cross onto their land because of no signs. That is the law of NJ -- and if you hike the woods as much as me, it makes sense.

Below: Me once being confronted by landowner. She put tons of signs up shortly thereafter. Importantly, the general-public posting laws DO NOT (!) apply to hunters. Hunters know the routine. They must always know where they’re at … at every step, every inch. The onus always falls on a hunter to make sure he/she is on legal hunting land. No exceptions, ever. 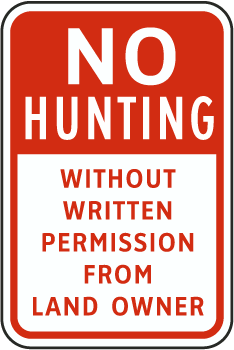 There are shades of gray should a police officer tell you you're trespassing on private property. Although the officer usually has no idea who owns the property, a common principal reigns: All land is owned by somebody, so you gotta be trespassing. Albeit an Old West attitude --- and counter to NJ's laws -- it still reigns.

I've run into this policing thinking too many times to count, usually the result of some neighbors calling in after seeing me using a detector or seeing my truck parked. More often than not, the responding officer feels obligated to do something authoritative -- knowing the callers, often locals, are watching.

Officer: Do you have permission to be on this land?

Me: Well, I don't not have permission.

Despite the double-negative, that's actually a spot-on serious answer. It means the land is unposted and I haven't verbally been directed off the land by the rightful owner. Many an officers take it as a wise-assed answer and out comes the "Let me see some ID" thing.

(Note: Despite some nonsense you'll see on Wise-ass TV, you really do have to show some form of ID when demanded by an officer of the law, especially in this day and terroristic age.)

About half the time that I'm "busted" -- while legally metal detecting -- I'm told to leave based on, well, neighbors. And I usually go. No biggy. However, I know that I'm violating no NJ criminal trespassing law. The problem is I know how many laws the officer has at his beck and call. That's NJ for ya. I'm outta there.

Below: This sign is meaningless in many sections of rural NJ: By the by, upwards of 25 percent of seemingly legally-posted, heavily-wooded property are actually being posted by hunters trying to keep others out of the land they deer hunt ... but don't own. Hell, I once went the pseudo-sign route to protect a boggy area where the state's largest spadefoot toad population breeds in spring. I took them down afterwards. My ugliest land confrontation incident in NJ (I won’t get into the crap I ran into in North Carolina) was on the edge of an absolutely unposted open-field property in Burlington County, going back maybe 30 years now. I was metal detecting on land that had been a farm … long ago.

I was working a stand of trees and down on one knee digging a hole when I was rushed upon by what I can only describe as a retired farmer who had apparently spent way too much time under the sun without a straw hat. Imagine looking up to find a white-bearded, sunken blue-eyed, double-barreled nutcase aiming a shotgun at your head … with a finger on the trigger! I kid you not. I had a buddy with me who will fully confirm the could-easily-turn-deadly confrontation. Oh, go ahead nonchalantly suggest the double-barrel might not have even been loaded. And how does one determine that when in the midst of a staring contest with a couple unblinking barrels?

To be sure, the glaring barrels and the accompanying deranged glare from Farmer Demento told me it was no-contest time. I grabbed my detector and digging tool in one hand and held my other hand high into the air. I turned and began walking away. I was still in my life’s cocky mode back then but I can guarantee, no matter how cocky you are, turning your back on a crazed shotgunman sends a monumental death chill running up your spine -- and clear up the spines of each hair on your head. I swear my hair looked like Buckwheat’s as I walked away. It wasn’t until I was almost back to the car that I loudly began singing, “Home, home on derganged …” I kid you not.

After about a week of PTSD pondering, I went against my low-profile tendencies and called the police; state-ies in this case. I told them about the Wild, Wild West Jersey incident. However, I called as one of those aggravating numbnuts who talks the big talk on the phone but refuse to offer a name -- or a willingness to press charges. But there were damn good reasons for my remaining anonymously inactive. I sure didn’t want the farmer or his kids – later know as Children of the Corn – to know my who-abouts or whereabouts. More importantly, I was closing in on my annual departure for Hawaii. "Oh, sure officer, I'll just cancel Hawaii for a couple month to hang around in winter-coated Jersey to testify in court against a crazed farmer -- and, soon after, to be chewed upon, like an ear of corn, by a bevy of smileless children in Mennonite suits and glaring with glowing opal eyes as they shuck me." Goin' left. Surfers will understand that. 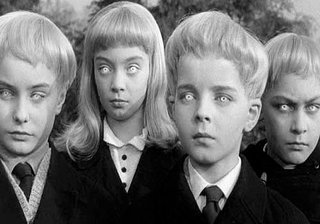 Fortunately, the cops new the maniacal man quite well. They added my “anonymous” report to a growing list of complaints about his farming out threat deadly force while patrolling his precious property.

And I wise-assedly add emphasis to that “precious.” A year later, when I returned to NJ from surfing myself golden brown in Hawaii, the gun-totin’ goon’s precious private property had been sold and cleared for what would soon be a massive housing development.

I still occasionally ponder the ugly irony of my having possibly gotten my brains blown asunder over farmlands that was being lethally protected so it could become a blightish housing development.

Now, how did I get to this point? Oh, that’s right, sharks teeth and the crappy coldness out there.

Today’s hideous weather has, in fact, stymied the intents of a slew of striper hunters wanting to nab their first bass of the season. I did have one Cherry Hill gentleman (LBI property owner) thank me for guiding him to the Delaware, where he scored. Hell, I would know the Delaware from the Rio Grande. I’m just getting a ton of reports from Avery and the bass-slayers out that way. 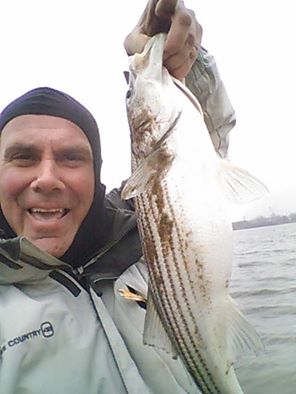 Way closer to my lands of understanding, I’m getting highly-mixed reports from Graveling and the Mullica. Along with a better bass here and there, I also have a couple/few skunkified reports. I have to admit for, what I know of that area, that’s how it fishes -- though the sharpies thereabouts know how to read winds and tides to extreme advantage.

I've had a rush of questions about digging bloodworms locally and I offer the same response: It's not for you. Outside the mud and immense work for such a small haul, this time of year there are only a couple small-area spots to worm; nowhere enough for me -- and others -- to dig. Feel free to explore lowtide mud flats wherever you see them. You might get bloody lucky.

I might also note that even though you'd only be digging worms, NJ Fish and Wildlife will check on you as if you're clamming. And damn if you didn't just happen to keep those steamers you dug as bycatch. Have a clamming license at the ready just in case.

I've been stopped and checked while worm digging, mainly on Sundays, when it's obvious I can't legally be clamming. After being polite and showing harvested worms and no clams, I've always been allowed to carry on digging.

One ecological point about my worming, I can leave a very pockmarked mudscape behind. It looks like damage but it is just the opposite. Turning over the mud like that is a boon to benthic life.  Left to it own devices, sand and even polluted material covers the mudflats, pressing it down into anaerobic layers not that far down ... a stinky dead zone. Areas that I had dug for years soon went from offering just a few worms -- of all sorts -- to being alive with mud life of all sorts. They love the mud getting loosened and aerated.

Below: The rel eye-opener when worm digging are ribbon worms. I have found them well over six feet long, when stretched over my head, slowly pulling them out to prevent breaking.