Monday, July 26, 2010: Ideal boat fishing conditions today. East winds are hard enough for a drift but lacking the torridness of recent days. In fact, this a.m. saw some folks with light jackets. … 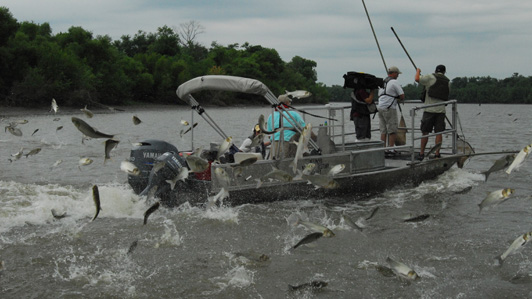 Ideal boat fishing conditions today. East winds are hard enough for a drift but lacking the torridness of recent days. In fact, this a.m. saw some folks with light jackets. Not for long, though, as the sun set up and bumped things into the 80s, though way down on the humidity front.

(Above: Think Asian carp aren't overpopulating the Mississippi? This boat ride went on for miles and miles with the same flying carp reaction.)

Still counting down to the fast-approaching BHM&TC’s White Marlin Invitational. I see nothing nasty on the horizon, wind or weather-wise. Obviously, the canyon zone has a mind of its own but smooth sailing seems to be on the menu. I should note that nearshore winds could get a bit gusty here and there -- here being Thursday early a.m. and maybe a.m. Saturday. Still, the main weather theme is light and variable winds. I’d have to say that a lack of winds in the canyons could be a larger problem than honking winds. It sure seems that at least some surface stir helps trolling efforts.

I’m guessing the top sunscreens known to man will be mandatory through the whole tourney. Back at the dock, it’s always an easy read which crewmembers settled for generic sunscreen: raccoon eyes of the highest order.

Make sure to check out: www.thewmit.com. In fact, you might want to “favorite” that site’s “Weather” page.

“Jay, I noticed your mention of unheld rods catching bigger fluke and I have to agree 100 percent. My son and I caught about 30 fluke and only the dead stick had keepers – though I lost a monster I hooked on my jigging rod. I had it right next to the boat and I stupidly tried for a tail first net. Yes, I know better. I also could have waited for my son to land the fish he had on so he could net mine. Lessons learned. By the way, green gulp rules.”

“We caught a few small bass (location undisclosed) and was very alarmed at the numerous small parasites attached to the skin and even crawling on the fish. I wouldn’t have kept the fish even if they were large enough. …”

(While I’m an alarmist to the nth degree, the way you describe the infestation it sure sounds like an overload of isopods, possibly related to the massive eelgrass mats in the bay and inlets. Isopods thrive in those mats. The small parasites are obviously aggravating to these bass but are nothing like the potentially deadly mycobacteriosis, which manifest in larger sores and sometimes-gaping openings into a fish’s internal organs.

I have seen bass going airborne, landing on their sides, in an effort to knock off the aggravating isopods. My guess is once these fish hit cooler water (be it deeper down or come fall), the hitchhikers will abandon ship. One wonders if isopod outbreaks (and there are dozens and dozens of varieties) will increase with a warming ocean. J-mann)

[Gloucester Daily Times] By Richard Gaines - July 26, 2010 - A formal request has been filed for a congressional committee hearing on a bill that would give new flexibility to the Magnuson-Stevens Act and allow regulators to give fishermen larger catch allocations while overfished stocks rebuild on an extended timeline.

The Magnuson statute, the governing document for fisheries, still generally requires overfished stocks to be rebuilt on hard, 10-year schedules.

The proposed Flexibility in Rebuilding American Fisheries Act would allow the government to make the timelines somewhat elastic as long as progress continues toward the goal.

The rigid requirements in Magnuson for rebuilding in a decade for the most part have been held responsible in many quarters for the paltry allocations to the New England groundfishing fleet, now struggling to keep afloat with between one quarter and one third the volume of fish allocated into catch shares that were landed last year.

Vito Giacalone, policy director for the Northeast Seafood Coalition, said last week he believed the National Oceanic and Atmospheric Administration was angling for a 'forced consolidation by pushing fish off the table.'

When confronted, NOAA regulators have pointed to the Magnuson Act and insisted Congress has given them no choice but to grant low catch allocations.

The lead sponsor of the flexibility act, Congressman Frank Pallone Jr., D-N.J., notified the Recreational Fishing Alliance this week that a request for a hearing had been sent to Rep. Nick Rahall, a West Virginia Democrat and chairman of the House Natural Resources Committee.

The power to grant a hearing sits with Rahall, the committee chairman. Efforts to reach his staff Friday were unsuccessful.

Pallone's move is sure to start a political ruckus. The flexibility act has been a perennial non-starter, but a combination of constraints on fishing - some statutory, some regulatory - by the Obama administration helped bring to Washington, D.C. in February as many as 5,000 recreational and commercial fishermen for an unprecedented national rally for fishing rights, and access to enough fish to sustain the industry.

Pushing back against the legislation is an alliance of conservation organizations centered around the Pew Environment Group.

'We're trying to keep that bill from moving,' Pew's Lee Crockett has said.

'Whether fish recover in seven, nine or 11 years, it doesn't seem to me to be a moral issue,' Frank told the Times in a previous interview. 'To them,' he added, meaning Pew and its allies, 'it seems to be.'

Pew, however, supports a related bill by Pallone and co-sponsors that would set up a fishing industry and ports stimulus program to retrain fishermen, revitalize waterfronts and promote cooperative research.

Crockett said $80 million for five years was authorized for the program, though how much is actually appropriated remains to be determined.

Co-sponsored by Shea-Porter and Chellie Pingree, a Maine Democrat, the Coastal Jobs Creation Act gets a public hearing Tuesday before the Subcommittee on Fisheries, Wildlife and Oceans.

That panel's chairwoman, Madeleine Z. Bordallo, a Guam Democrat, has held a series of hearings this year on the unfolding scandal in the federal fisheries law enforcement agencies, and on catch shares, the Obama administration's re-engineering of the fishing industry into a market based on fishermen's catch allocations that can be bought, sold or traded as commodities.

The Recreational Fishing Alliance was the lead organizer for the Feb. 24 rally at the side of the U.S. Capitol.

The flexibility bill would allow regulators to extend the 10-year rebuilding period if certain conditions exist. These include the need to 'provide for the sustained participation of fishing communities or to minimize the economic impact on such communities, provided that there is evidence that the stock of fish is on a positive rebuilding trend,' according to a summary of the legislation provided by the sponsors.

Giacalone and other industry analysts have argued that the biomass goal is a non-scientific guess, and a moving target allowing the regulators to keep the industry at bay no matter how steep the rebuilding curve.

But Crockett and critics of fiddling with Magnuson warn against removing the rebuilding imperatives.

Or perhaps the surprise opening of Alabama's shrimp season caught a lot of folks off guard.

Either way, it was hard to find a shrimp boat working the waters of Mobile Bay on Friday morning as an oil-delayed season began.

'I came out into the bay expecting to see maybe 100 or 150 shrimp boats working, but I'm just about all alone,' said James Knight, who has been on the water for the opening day of shrimp season every year since 1985.

'Usually, there are boats as far as you can see.'

Knight said his catch early Friday was a little off, compared to years past. His normal average, he said, is about 15 pounds of shrimp per hour he drags his net around the mouth of Weeks Bay, where he has a waterfront home.

'I'm probably catching more like 5 pounds an hour today,' said Knight, who wasn't ready to blame the oil spill for the reduced harvest.

'We had a really cold winter. And all that rain around April. That has an effect,' Knight said. 'Maybe the oil did too. I don't know.'

Shrimp in much of the bay were good sized, about as large as an adult's index finger.

Shrimp season usually opens in the first week of June, when there are few jellies in the bay. By late July, jellyfish are present in large numbers. They made their presence known Friday to anyone culling through nets full of shrimp, croakers and hardhead catfish.

Forsythe said the boat and its sister vessel 'Jack of All Trades' were dragging the lower Mobile Ship Channel.

The Nanny Granny's captain, P.J. Nelson, was headed toward Florida, where the two boats had been working since April because of the oil leak, but turned around when word came down on Wednesday that Mobile Bay would open to shrimping.

'It's always better to be able to shrimp in your own backyard,' Forsythe said, 'but I have to hand it to those guys. They stayed fishing down around Apalachicola and the Florida capes when they could have probably made more money working for BP.

Other shrimpers had not been as lucky as the Nanny Granny, but said it was still early.

Victor Zirlott, who owns Zirlott's Gulf Products on Fowl River, had maybe 60 pounds of 36- to 40-count brown shrimp on his boat around mid-day. He, too, was dragging the lower end of Mobile Bay.

'I haven't seen much in my try net, but I'm hoping at night time there might be an improvement,' he said.

One positive of the first half day of the season was that he'd caught plenty of croaker and other small finfish to bait his crab traps.

The 45-year commercial-fishing veteran, after more than a month of trying, last week got a mobilization number for the BP program that pays commercial anglers to work cleaning up the spill. 'It's kind of hard to take knowing that some guys made $150,000 with BP,' he said. 'I took all of the classes and did everything they asked and even got a contract, but never got called to work.'

Jimmy Noel at Deer River Bait and Tackle, who also has a commercial shrimp dealer license, said that he hadn't put out the big nets because his try net hadn't revealed anything promising as he worked his way from the Theodore Industrial Canal down to Dauphin Island.

A try net is a smaller net used to test areas for the presence of shrimp. Its size makes it easier to deploy and pull in than the large 25-foot nets legal to use in Mobile Bay.

'We're between the brown shrimp and white shrimp seasons really,' Noel said. 'We're hoping things will pick up at night, but I really don't expect it to get good with nice-size shrimp until later in August.'

Donnie Keith dragged his nets between Weeks Bay and Mullet Point. Lots of catfish, he said.

'You know, it's all right. I'm just glad to be out here. It's been a long time since I caught some shrimp,' Keith said, hauling a net with a barrel-sized load of fish and shrimp over the side of his boat. 'These here, these are just for the house. They're not for sale.'