Here's a today shot of Holgate taken by Tom B. That's the last patch of uplands on that portion of beach. It's all downhill -- and into the bay -- from here. 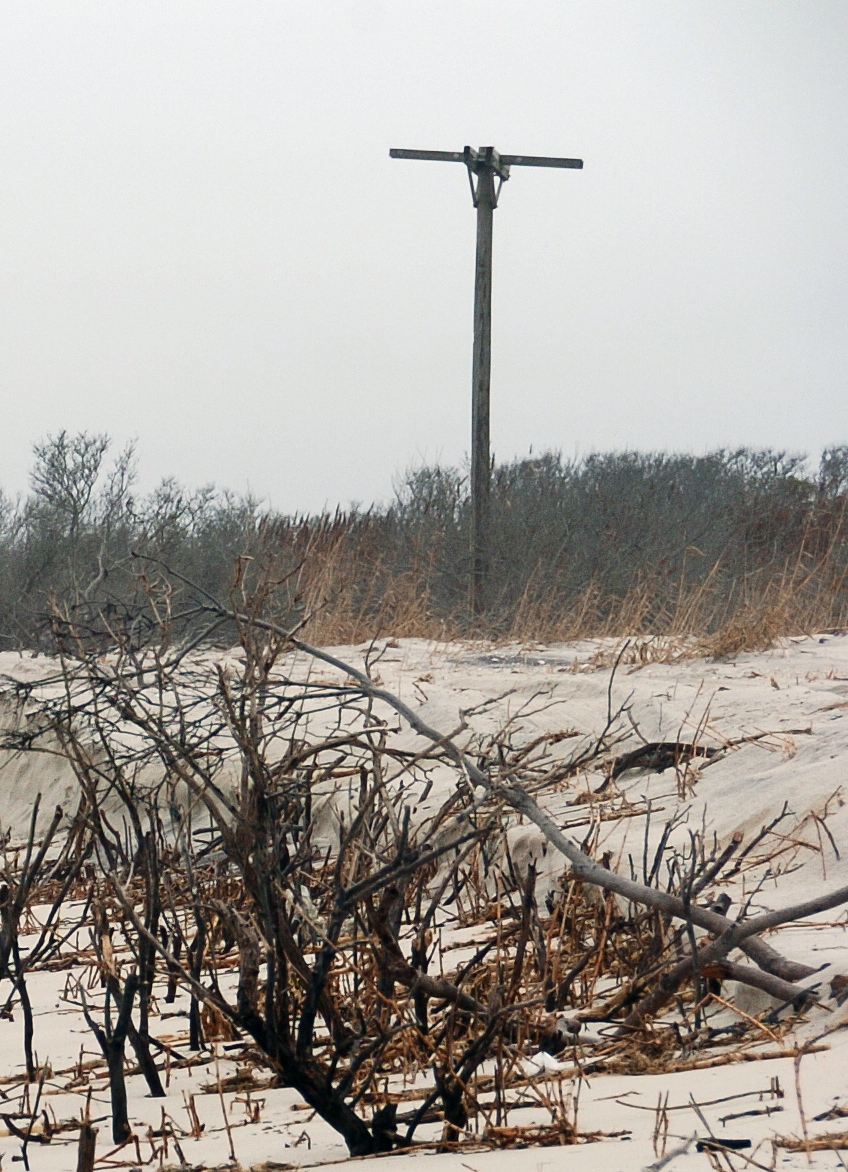 RIP – THE OSPREY NEST IS NO MORE. This shot was taken shortly before it's final night, last night. Another Tom B. shpt -- there she lies -- 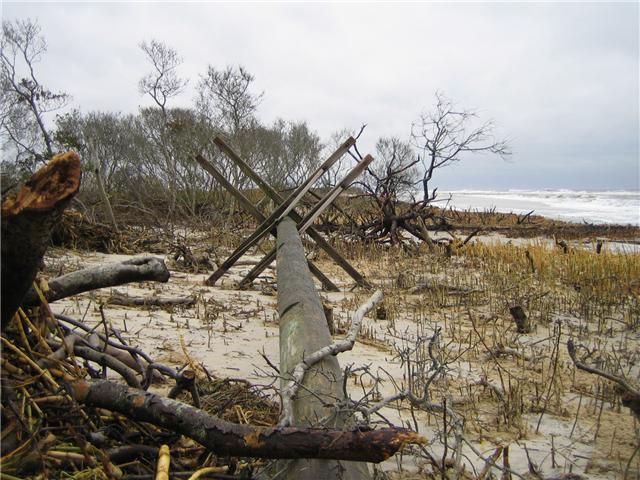 ((((((((((((()))))))))))))) It’s that humbling time of the year where I ask for donations to keep this blog up and running. It is a time consuming enterprise but I enjoy it. It’s kinda therapeutic. I hope you find it fun – and functional. I’d also like to take this time to sincerely thank those who email or phone me with tales, fishing reports and questions. It’s energizing. Donations can be mailed to: Jay Mann, 222 18th Street, Ship Bottom, NJ, 08008-4418. Being Type A I don’t always have the time to mail Thank-you note but, believe me (!), your donations are fully appreciated. J-mann. Sunday, October 18, 2009: Waves: Large. The famed Osprey nest in the Holgate Wilderness Area is no more. The indispensable landmark and navigational aid went down like an old friend dying in the night. I had made it something of a symbol of end times for Holgate, as erosion ravages the end of the Island at a seemingly accelerated rate. Obviously, the downing of The Nest indicates major erosion all around it but that damage is only being seen from the parking area. I hope to hike down later since the end is still closed to vehicles. According to Kurt H. the cliffs now showing are Dover like. In a way, they might be preventing a break from occurring – for now. Elsewhere, I’ve gotten photos of 10-foot-plus drop-offs at buggy entrances. The damage is so widespread that it will surely take days and even weeks to get the beaches back to full possibility. Of course, the buggy entrances are also primary entrances for municipal equipment so they’ll likely be fixed first, but, as noted in yesterday’s blog, getting on the beach doesn’t mean you can traverse large areas – or that you’ll be able to easily get off if a lot of other vehicles are tearing up the few passable entrances. Street flooding via bayside overflow will be bad again today on LBI -- a few hours after the oceanfront high tides. It’s amazing how many people are driving sedans through up to 3 feet of salty water. By the by, the police are also coming down on folks going through water too fast, nailing traffic in the other direction – and, in some cases, causing wakes that can force water into Boulevard buildings. I just heard about a Grand Marquis stalled near Foster's Market with flood water coming in the doors and the passengers very frightened. What was the driver thinking!? I'm sure the PD is going to love wading in the water to get them out. I had three emails asking what I thought would be the timeframe for surf fishing the beaches. Truth be told, I think walk-on street end angling will be doable shortly after the arrival of west winds beginning tomorrow. I also think this storm may have sped up the arrival of bass migrating down from the northeast shores -- and that those fish will be shouldering up to the beach, as is always the case when clams and crabs get uncovered the way they are now. I totally guarantee that every bass that is caught and kept for days to come will be loaded with crabs. Clams are a different story. In the past, storm like this would uncover surf clams by the thousands. Well, from what a number of experts have told me, there are no longer surf clams in nearshore sands that were once so thick with them you could actually feel them under your feet when standing in sand bar areas. One has to wonder if that lack of clams – a huge part of a bass diet – is yet another reason that stripers are now seemingly so quick to move off the beach aways to pursue bunker balls. I guess this was a good year to have the Classic last 8 weeks as we’ll be pretty much losing an entire weekend and good chuck of coming week to the effects of these two back-to-back storms. If you have any storm/beach/flood info, please pass it on to me via jmann99@hotmail.com. Thanks