How to run from a pissed off billfish ... or not: 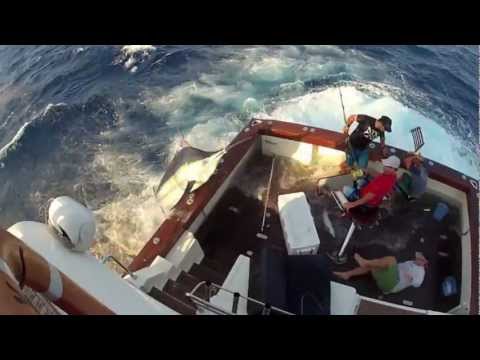 Evening update: Tried fishing around the big jetty at Nebraska Avenue. I probably would have had roe luck fishing for stripers in the state of Nebraska -- them-there Cornhusker stripers. 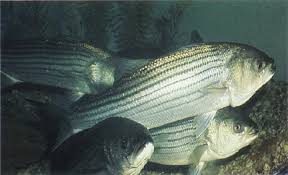 What I did get: fluke, fluke and more fluke. Landed three of 'em and fielded a load of short hits that were almost positively more fluke trying to come ashore.   None were large, maybe 16 inches tops but it proves they're still out there -- in abundance. All went for sand-eel plastic.

I opted to hit the beach in shorts. Doing so gave me an instant insight into the paucity of bass. It's way too frickin' warm in there. I was standing in the water barelegged and there wasn't even a shock factor it was so mild. I kid you not. Add to that the water clarity, which is top-to-bottom clear, and it's not suited to fall surfcasting.

The one thing of interest was a decent flurry of birdplay toward dark. It was pretty much unreachably out there, maybe 200 yards, but it indicates some kind of fish v. forage interplay.  By the by, the shoreline remains loaded with spearing. When jigging, it's easy to spook them into the air so I get a good read on their presence. Monday, October 28, 2013: Quirky winds are playing the spoiler. That wailing wind session Saturday was uncalled for, literally unforecasted. Yesterday’s honking westerlies smoothed things out but left most of use wanting for action. I even got skunked late day in Holgate, though I had a few solid short hits, likely fluke swacks. Today the south winds are flaring up a bit but not brutally. We now have to deal with  maybe 36 hours of very brisk norther to northeast winds. After that, most of the upcoming week will offer west to southwest winds, though some serious gusts will mix in, now and again.

Will the quick batch of northwinds be enough to spark something striperishness after the gusts subside? Any other year it would be the perfect spark for stripering. I’m not totally sold on anything instantly helping the surf fishing this year, though I’ll be out there exploring during the quick north blow. WEEKLY RUNDOWN: First of all, don’t panic. OK, so maybe we’ve never seen a fall stretch this quiet on the striper front. Remember my guarantee: We will be catching big-ass bass. And I’m not straying from that assurance one little bit, though I should mention that I didn’t actually specify what year we’ll be seeing those bass. A small technicality but one worth noting.

It’s utterly astounding to see only one weigh-in for the LBI Surf Fishing Classic over a fairly crowded fishing weekend, though that one fish was a 30-2 beaut taken in Loveladies on plug by Rob Vallone, a hardcore caster.

Rob’s striper was the second north end cow bass taken on a plug in a week’s time.

The other, a non-Classic bass, was a hefty 35-13 taken by “Jake” in HC. That hookup was interesting because Jake had the fish first swirl on his plug right near the beach. He then did a low-motion flip of the plug, close in, and the plug got nailed – a perfect example of a “following” fish drawn into the shallows. Gotta take it slow and easy when recasting for a fish in that close. Quite exciting.

Hearing about those better bass might seem a contraction to my opening bemoaning of slow stripering. Not so. The number of skunked casters I came across while driving the beachfront was pretty much unanimous, so to speak.

But to rebound toward the conviction of better times a’coming, the Sea Shell’s Striped Bass Derby had a slew of very nice stripers for boat fishermen: Two fish in the upper 20-pound range, four over 30 pounds and one over 40 lbs.

I’ll be trite by saying those weigh-ins indicate the fish are out there. However, in recent years, that “out there” concept has been brutally frustrating for surf anglers, as bass hang within eyesight of the beach but just don’t make sweeps of the swashline (shorebreak area) to eat.

My theory: With the protection of nearshore bunker from factory ships, the close-in bunker balls have seemingly enticed a lot of beachline fish to swim out beyond surfcasting distance, in both spring and fall. Stirs are the cure for that. Storms and (particularly) sustained south winds rough things up real fast, knocking around the bunker baitballs and forcing the related bass to resort to sucking clams in surfcastable shallows.

By the by, smaller bass can’t always compete for the big bunker in baitballs and are more inclined to mosey off to move in close to the beaches for clams, worms and spearing, mainly late-day – during what has become the golden half hour of schoolie stripering at sunset.