Monday, October 20, 2014: I’ve got a fractured work day goin’. Got in early so I could do a mid afternoon bug-out before returning for the night shift.

Monday, October 20, 2014: I’ve got a fractured work day goin’. I came in early so I could do a mid-afternoon bug-out before returning for the night shift.

By the by, that bug-out expression has its roots way further back than the term now used to mean a well-planned escape from a mushrooming apocalypse. You likely know that TV programs on doomsdayers, like “Doomsday Preppers” and “Doomsday Bunkers,” call the exact moment of clearing outta Dodge -- to shelters and hidden weapons caches -- a bug out. It’s a term theft. Growing up, we boomers constantly used the expression “Let’s bug out,” meaning we were so bored with a place it would be more fun to run out and help dig bomb shelters against the Ruskies, and its hideous, wart-faced women wearing beet-stained babushkas with hammer and cycle insignias.

Hey, we intrinsically believed everything our good government told us about the soviets and their females. Needless to say, I’ve since become a tad betrayed after seeing (and hearing) tennis vamp Anna Kournikova and an army of Russian gorgeousness leaking from the Russian Federation. For hailing from such a frozen country, they sure cruise around a lot in minuscule bathing suits. Maybe their skin is all toughened up from generations of walking around like that in places like Siberia. I’m thinkin’ I shouldn’t have nixed my Russian.

Below: The kournster. Someone most folks wouldn't tell to "bug off!" 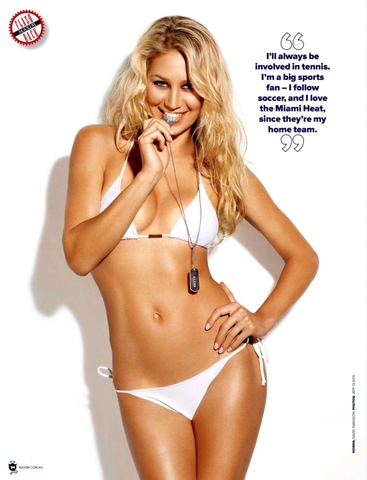 Anyway, after bugging out of work for a short Holgate stint, I drove onto Holgate and was distantly greeted by the bald eagle, who is now calling the west side of 5,000-foot mark its home. I don’t know if it’s a male or female. We’re not all that close yet, so to speak. I mean, you don’t just run up to a strange raptor and say, “Ya mind if I spread your feathers apart down here?” 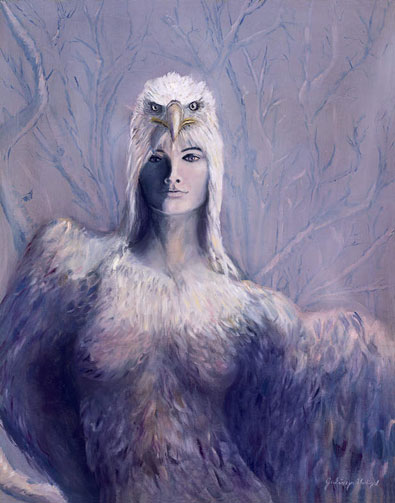 Anyway, the now famed eagle was, as usual, a ways off so I headed to the Rip to see if those things called fishes were around. Then, right past the Rip, don’t I go and spot another eagle. Nope, it wasn't the first one now suddenly on the wing. Stu D. was still back near the first one, which remained typically hunkered down.

The Rip eagle was a bird of another feather, in as much as it was all over the sky -- swoopin' and swervin' and landin' and takin' off. It made the first eagle look comatose. 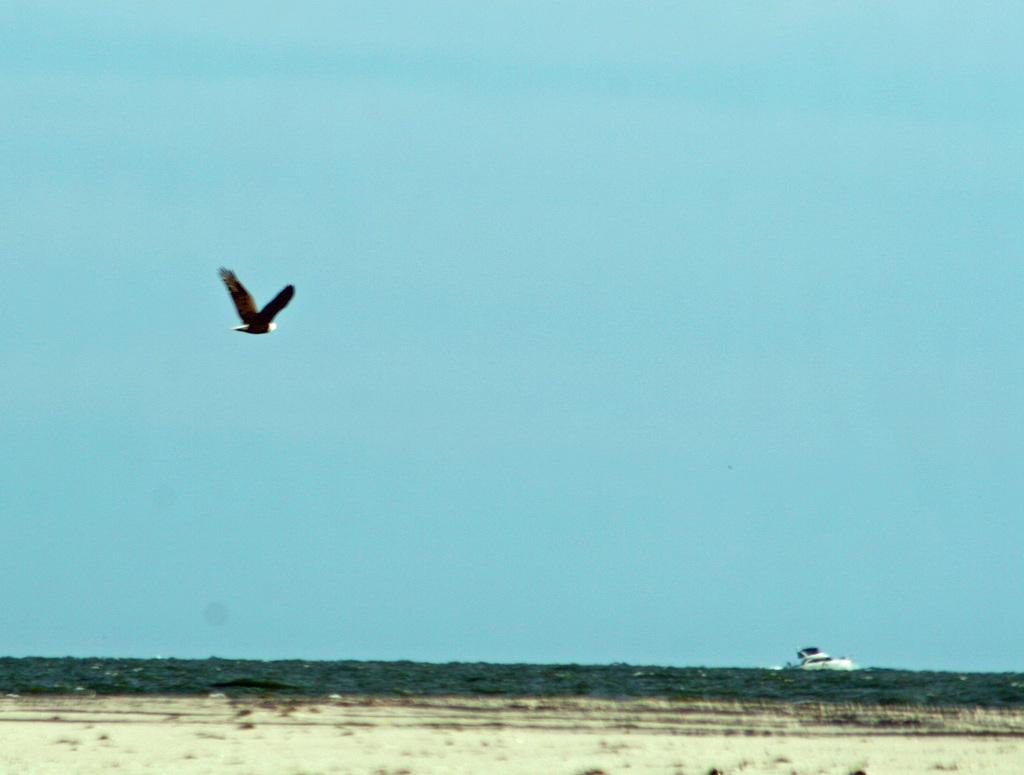 I eventually headed to the back cut to jig a bit.. You know things are bad when there are way more bald eagles than fish around.

Heading off Holgate beach, I managed some far-off pics of the Rip eagle (above) but when I got back to the 5,000-foot mark, the resident eagle there had actually moved – and was now perched on a post right next to my driving lane. I videoed him. Yes, a he.

Check out this vid of Eagle 1: 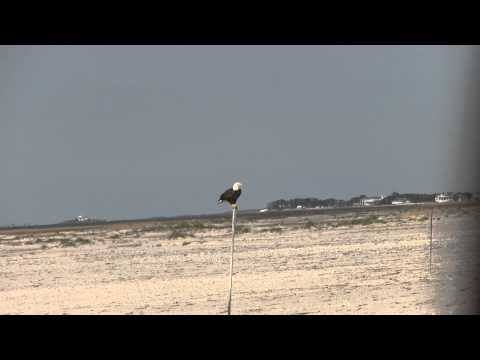 Best surf fishing tournament in the world. October 18th and no fish weighted in yet..complete insanity. Poll...is it the high water temps or beach replenishment? My kind of weather coming up (ugly), too much money out there not to go out and try and nail a tourney worthy fish. I'm out there...

With pride, we took practical steps towards launching the first Arab mission to Mars. The UAE Space Agency and the Emirates Institution for Advanced Science and Technology will collaborate to build the Mars probe. The UAE Mars probe is mission of national pride, a great Arab achievement, and a valuable contribution to human knowledge. I call on all young people across the Middle East: join us in writing a new chapter in the history of the Arab nation.

It’s an eerie story of a so-called “demonic infestation” that seems so terrifying that it is perfectly suited for the pages of a horror novel. But Bob Cranmer, a former commissioner in Allegheny County, Pennsylvania, insists that
it was a horrific and life-altering reality
for him and his family.

From a mysterious, blood-like substance coating the walls of his home to crucifixes purportedly snapping in half on their own and scratches randomly appearing on his body, Cranmer told TheBlaze earlier this year that something profoundly evil was terrorizing his family.

He claims that the demonic force was eventually expelled, but only after the Diocese of Pittsburgh, Fr. Michael Salvagna, a local priest, Protestant pastors and Adam Blai, a self-described demonologist, spent two years fervently battling its presence by repeatedly holding Mass and blessing the home.

December 12, 1988: The day Bob Cranmer and his family moved into the home (Bob Cranmer)

Following the release of his new book in August detailing the purported horrors titled, “The Demon of Brownsville Road: A Pittsburgh Family’s Battle with Evil in Their Home,” Cranmer recently shared with TheBlaze photos and additional details of what unfolded.

He claims that the images, which show a range of the purported activity in the home, capture only a tiny portion of the chaos that raged:

The “Figure” on the Staircase

Cranmer said that it at first seemed as though there was a “friendly ghost” inside the home in December 1998 after his family moved in — and that it wasn’t until 2003 that the situation truly intensified.

One day, he said he noticed the family dog sitting and intently staring at something on the staircase.

Cranmer didn’t see anyone or anything there, but he decided to snap a photo anyway. After he had it developed, he noticed a “smoky skeleton” on the staircase.

And that’s what he believes his dog was staring at — the very force that he contends was wreaking havoc within the home.

In a previous interview, Cranmer, who has four children, said his kids also once saw the entity, describing the figure as “a really strange-looking person” wearing a black dress.

But that was the only overt apparition, as he said the demon would typically manifest itself as a shadowy figure moving about the home.

Blai, a demonology expert, has a degree in psychology and said he saw shadows with no origin and experienced phantom smells.

“I observed black shadows sliding along floors and walls that were not being cast by anything,” Blai told TheBlaze. “I also smelled a column of air with a horrific death-like stench that moved like a person walking. This column of air left no lingering scent behind it like natural odors would.”

Mysterious Scratches on His Body

Cranmer also said that he would often wake up in the morning with mysterious scratches on his body.

“The scratches would [usually] appear in a group of three parallel scratches and they would generally run straight down your back and across your chest,” he said. “I would never feel [them] when they were being applied. I would wake up in the morning and I could certainly feel them then because it hurt.”

See a photo showing some of those scratches below:

The Bending and Snapping of Crucifixes

It wasn’t uncommon for the Cranmer family to use crucifixes in their effort to battle the demonic force they believed was infesting their home.

They would often wear the necklaces, but would frequently wake-up and discover that something quite peculiar had happened to them.

“There’s one that my son wore. It was bent completely in half, folded over on itself,” he said. “And we found it on the floor off of its neck and when I opened it up again it broke in half.”

Here are some photos of the crucifixes, which were bent and snapped in half:

“Blood” on the Walls

Perhaps one of the creepier claims is the blood-like substance that Cranmer said first appeared in puddles on the bathroom floor and then later on the walls of the home.

“The walls really didn’t bleed,” he said. “It’s not like this stuff seeped out of the walls on its own and ran down.”

He said, instead, that it seemed as though someone or something had intentionally splattered it.

Noting that priests were always going through the home and splashing holy water on the walls and floor, he said it seemed as though the demonic force did the same thing with the reddish substance.

And here’s a paper towel that is saturated in the mysterious red substance:

Orbs in the Coal Room

One day, Cranmer snapped a photo of the coal room of his home and later noticed numerous circular objects seemingly floating in the air.

Supernatural orbs or a mere consequence of the complexities surrounding lighting and photography? You decide:

While Cranmer’s story might seem unbelievable to many, the Diocese of Pittsburgh has publicly stood by the details, as have others who were involved during the two-year effort to correct the situation inside the home.

“I kind of have post-traumatic stress disorder,” Cranmer said of the experience. “I was always worried that this thing was coming back and that it would start up again.”

But aside from a few minor incidents, the home has been relatively calm since faith leaders held a final Mass in 2005, he said.

As TheBlaze previously reported, Salvagna, who was present during what Cranmer described as “deliverance services” in the home, corroborated many of the details shown in the photos and described by Cranmer in interviews.

“When we went to pray … you felt you were invading an enemy territory,” Salvagna told TheBlaze. “We would have these smells … drippings on the wall that looks like blood.”

The priest also said that Cranmer and his family members would “wake up with scratches or bites” and that the horror took a toll on the entire family.

Salvagna offered up the theory is that an abortion mill was run inside the home long ago and that it possibly opened the door to the terrifying presence. Additionally, the family believes that a traumatic murder and burial might have unfolded in the 1700s on the property.

The priest described the process of dispelling the force as a long one that was “like putting out a fire on a gas well.”

“There are ritual prayers for house infestation. There are patterns of prayer,” Salvagna said. “We turn to God, the saints, the blessed mother … there are regular prayers … Psalms … scripture passages.” 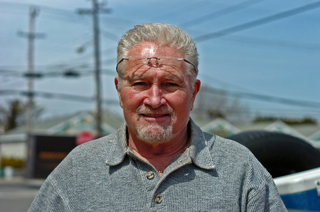