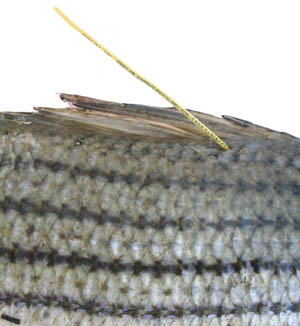 Above: Make sure to look for these tags -- but don't remove unless the nearby skin is infected or you simply can't see the tag data without your reading glasses. Leaving tag in place  take tagger's name or phone number, measure the fish, release, and pass the data onward, quickly.

Please shop locally for Christmas and the holidays. In fact, go out of your way to find what LBI shops have worked long and hard to reopen. Tackle shops are more than willing to offer info on what's hot. Gift cards to coffee shops just keep giving. 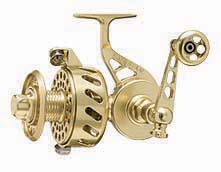 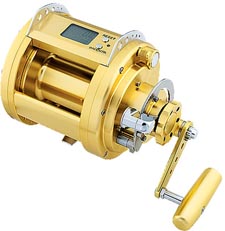 Related email: "Jay, Are those very expensive reels worth it?"

(This gal was referencing a Van Staal.)

I will begin by saying there are exceptional reels for a lot less money. However, I have to admit that most of those hyper-expensive reels live up to their numbers. I say that because anglers are mighty damn discerning when it comes to laying out painfully big bucks. It doesn't take long for word to get out if an insanely  high-end angling item actually sucks. Conversely, I use van Staals and they just keep on keepin' on. If hubby is worth it, the reel is also.

Check out the look of this artificial:

Monday, November 26, 2012: Loads and loads of small stripers were taken from the surf over the weekend. I had fish and copious hits during my micro-session late-day Ship Bottom. Folks I talked with on the beach were getting shorts on clams, bunker and even herring chunks.

Much like fluke fishing, it doesn’t take long for folks to get over the initial excitement of actually catching something to wanting some take-home material. To their credit, a couple folks had a couple bass just fractionally below legal limits but dutifully threw them back. One super nice Hispanic fellow who had chucked back a 27.5-incher was a tad frustrated when I told him it is legal to purse the tail (squeeze the two tail tips together) to get the final fish length.

I’ve only gotten a few dozen post-Sandy reports from folks who had their vessel ravaged by the storm. Unlike homeowners hoping to see a decent reimbursement on their houses, boat owners are often biting the bullet, big time. I don’t know how reliable this is, but I’ve heard that a number of busted loose boars had their electronics stolen. That loss is often uncovered. I’ll tell you right now I’m going to be on the look for any suspicious boat electronics I see show up at the auctions I go to. Much of that equipment has serial numbers that can be backtracked providing boat owners kept receipts or jotted down those numbers. If a piece of your equipment is found being sold, it is still your property, cost-free. The person selling it is out of luck – or conceivably in big trouble. I hate rip-offs.

Hope everyone had a great Thanksgiving!  Family commitments and a NE wind that did not give up for almost two weeks allowed me to make it out once during the last week and that was Wednesday afternoon.  I had good friend Capt. Jack Shea on board for some tough conditions and dirty water.  Moving around a lot and after making many adjustments we landed three keeper bass to about 32” and one short.  Saturday’s trip was cancelled due to a posted Gale Warning.  The good news is the wind is cleaning up the water.  The Debbie M is staying in for at least another week and I do have next Saturday and Sunday open.  I also started to book prime dates for the 2013 fishing season so contact me if interested.