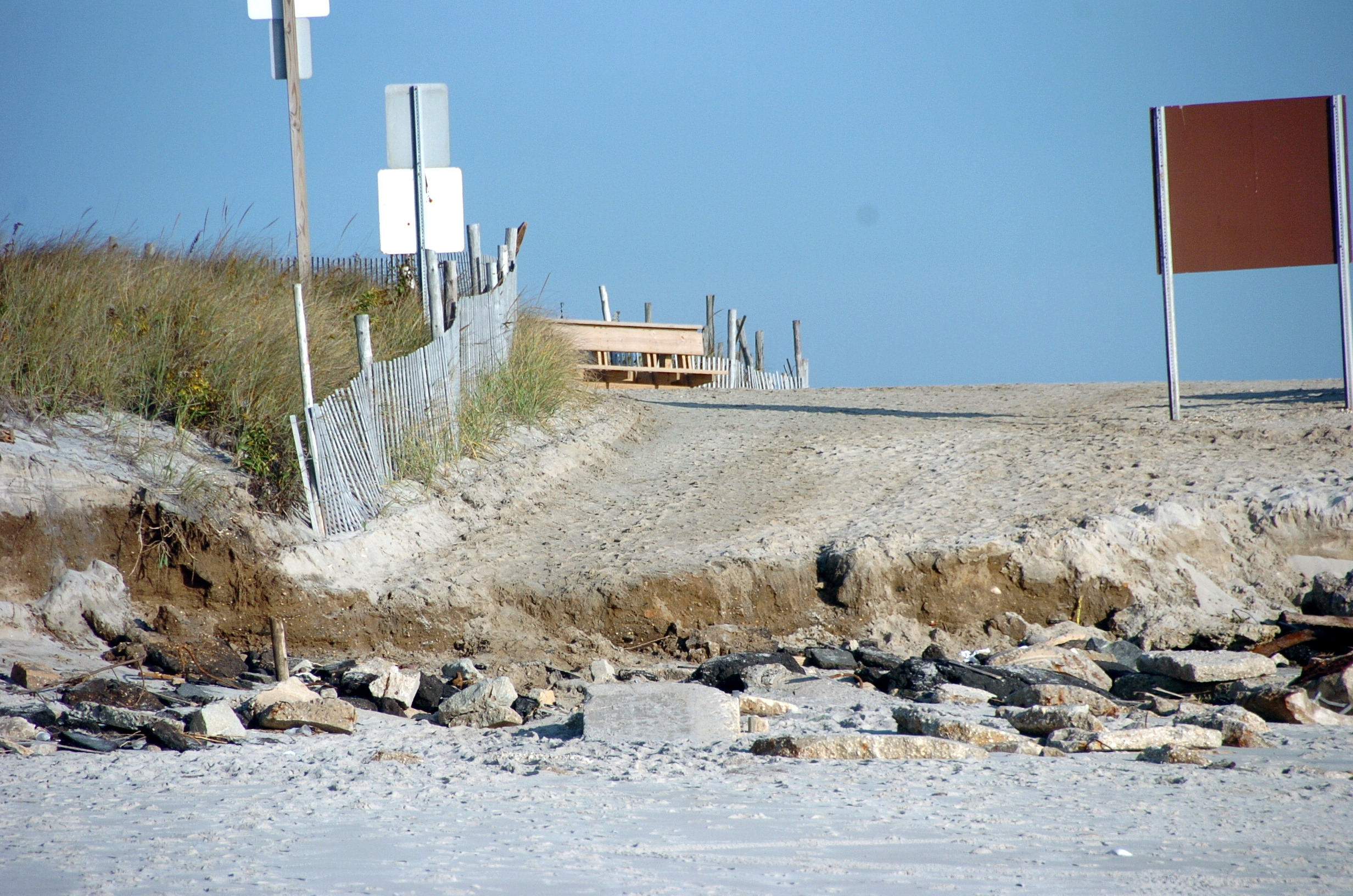 Holgate Info: Beaches low very good. Getting on is a rocky propostion. See more details below. (((((((((((((()))))))))))) Monday, November 16, 2009: Waves: Down to five feet. Water clarity: very good – especially when considering what the water just went through. Quite a few anglers out today a few weigh-in for the classic showed. I know many folks are wondering how Holgate fared. Excellently. You heard right: excellently. Of course that assessment needs a proper perspective (see further below). As the included photos will show, the beach is looking good -- wide and flat and downright inviting. Unfortunately, Holgate remains shut at the parking lot. That’s because of the ugly exposure right where we drive on. The now-familiar chunks of concrete and crap lie in the way, as does a five-foot drop-off. However, it is nothing we haven’t seen many time before. The problem is the Long Beach Township Public Works guys have some serious repair work to do at other beach locales, including some that present a danger to life and limb. They’ll likely be hitting Holgate pretty soon but it’s best to keep in mind the massacre that befell the dune fencing in many township zones. It’s not good to have those nasty balls of jagged wire and splintered wood just sunbathing out there. What’s more, should another storm come and cover that stuff, it’s a bitch to get it back out of accumulated sand. Anyway, back to those broad and beautiful beaches awaiting the first mobile anglers to hit Holgate. Firstly, it gets meaner down toward the end but before that I want to add the above-mentioned “perspective.” The reason the beach is decent is because it moved as much as 30 yards further west. The storm essentially exposed new sands, meaning we happened to get a fair beachfront look when, in reality, we lost another huge chunk of Holgate in the process. The ocean’s march to the bay in the vicinity of the former-Osprey Nest is getting big boosts with each passing storm. So what else is new? Harvey Cedars will get pumped sand very soon, as the dredge comes out of hiding from the blow. Much thanks to the many folks who kept me updated on various aspects of the storm. I’ll return the favor by being very present and accounted for in future squalls, of which I fear we’ll see many this winter. Upside of wild weather: We could be in for a milder winter, as is often the case when low pressure systems get the upper hand over frigid Canadian-Polar high pressure systems -- but keep close-at-hand that electric blanket or (in my case) that low-temp Coleman sleeping bag -- to use unzippered as a cozy top bed layer. For deer hunters: The whitetail count seems quite good after a few down years. The big change is the very obvious move of the main deer population toward human habitation. That makes for some serious tweaking of deer stands, making double sure they’re a legal distance from habitations but still close enough to grazing and trail-walking areas. Entire Route 9 zone (OC and BC) is simply loaded with deer.