So, it's a rainy day and you have this kick-ass motorcycle and a long table ...

It was shortly after Crazy Cal's insurance company saw this YouTube video that ... 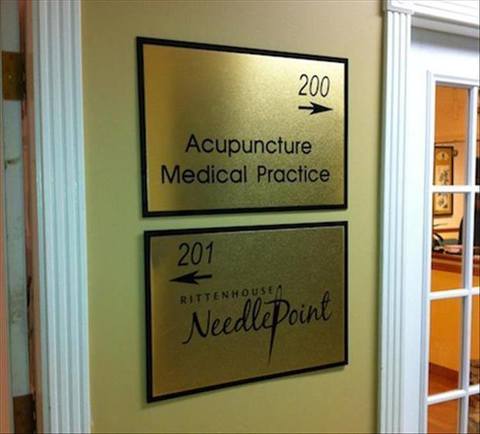 Monday, May 22, 2017: LBI traffic signals go full-cycle today, i.e. green, yellow, red. The bad news is some folks will be running through red lights much of the day; the upside is other folks, at those same intersections, will be stopping on green lights. It’s complicated.

Bad news for the light changeover day is the rain. I picture folks seeing a red light for the first time in months and slamming on the brakes. Ye-haw.

So what might happen if you blow a light and something really bad happens, collision-wise? Got me, though it would seem some legal leeway need be given. Fat chance, right?

Took a quick jaunt to the New South jetty around noon yesterday and saw only a less-than-occasional 2-pound bluefish being caught. A slow go for the rock-toppers.

There was no lack of weekend casters, most of whom were done with trying by midday, as the afternoon shift arrived, convinced they’d show the departers how it’s done. They didn’t.

Odd sight of the trip was a decent fluke taken on an larger Ava jig that was being allowed to tumble long the bottom in the current -- be it intentionally allowed to tumble or simply reflected the experience level of the angler. That said, you better believe I’ll be trying that bottom roll-an-Ava method when fishing those rocks for flatties this summer.

Surfside stripering is improving, at least when it comes to a nice scattering of bass in the take-home size range going for jigs or clam baits.

Knew there was a reason to get up early! Saw a chopper blue being walked off a mid-Island beach. I was driving so couldn’t collect details, though the rod held an older type red styro float rig, a larger float. Were the 1980s really that long ago.

Gorilla Blues still haunting the NJ surf! Unreal day yesterday, this was one of 17. 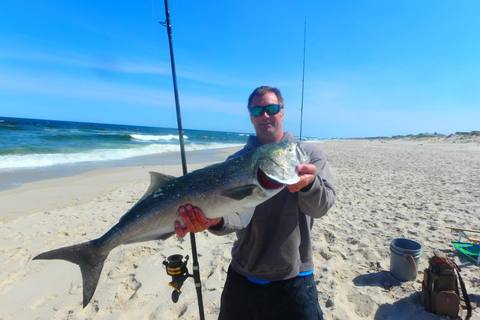 On the boat front, Zachary Michot wrote: “Tons of bait marked today and all the bunker you wanna snag with the amount of boats that were out today I'm truly surprised with the lack of hook ups. Couldn't believe how much fish and bait I marked.”

Fran Verdi: Just got off from listening. NJ is found out of compliance for fluke. ... From what I got they have until may 25 to put into regulation 3 fish @ 19inches 128 day season. Or letters are sent out for compliance

Dave Wittenborn My understanding is from what I have read, NJ basically knew they were going to be found out of compliance with 3 fish at 18". It's just a matter of what punishment, if any, the Feds are going to hand down.

Dave Wittenborn It's all about enforcement. We'll have to see how it plays out. If NJ is serious about sticking to 3 fish at 18" and the Feds lay off then we go with the NJ regs adopted last week. If the feds get serious and put in severe restrictions like cancelling our season and cutting future quotas then NJ will do an about face and go with the federal regs.

Jim Hutchinson Sr. I have it from pretty good authority that this move was pre-ordained. The ASMFC is not happy with 3 at 18 but the commerce department will not be taking action against us. We are 3 at 18 starting May 25 and running until September 5. ... In New Jersey we must follow NJ's regs unless they are found out of compliance which my source tells me will not happen.

Answered: Darlene Griffin named lily leaf tway blade ... a state-endangered type of orchid ... at least I had the orchid part right.
See video for longer look and some angles. https://www.youtube.com/watch?v=Aes_165wz-s&feature=youtu.be ... Click on photo for closeup look. Today is the last day of blinking lights for the season all you fabulous LBI lovers! Tomorrow, all traffic lights become fully-functional across the sandbar. Please drive safely and be aware of your surroundings at all times. My warriors tonight let's see what they can do!!! (17/P48) TRENTON - During ceremonies today at the Frank S. Farley State Marina in Atlantic City, the Department of Environmental Protection dedicated a new 32-foot water-quality research vessel to former Commissioner Robert C. Shinn Jr., who devoted much of his career in public service to protecting the environment.

DEP Commissioner Bob Martin and former Governor Christie Whitman, who named Shinn commissioner of the DEP in 1994, keynoted the event.
"Naming this vessel in honor of Bob Shinn is a testament to a lifelong legacy of commitment to environmental protection," Commissioner Martin said. "We are very pleased to honor a man who, in his various roles in public service, always cared very deeply about the quality of New Jersey's air, water, land and natural resources - and ultimately about the quality of life our residents are able to enjoy today."

"Bob Shinn is a true champion of the environment," former Governor Whitman said. "One of the best decisions I made as governor was to ask him to serve as commissioner of DEP. An innovative thinker, a visionary leader, and a trusted adviser, he played a key role in making sure that, when he concluded his eight years as commissioner, our state's air was cleaner, our water purer, and our land better protected than it was when he took the helm at DEP."

Shinn's accomplishments at DEP included creation and implementation of a Geographic Information System-based electronic permitting system called the New Jersey Environmental Management System; creation of the New Jersey Greenhouse Gas Sustainability Action Plan; and development of a National Environmental Performance Partnership System Agreement with the U.S. Environmental Protection Agency.
The Research Vessel Robert C. Shinn Jr. will help support the core mission of the DEP to protect coastal waters for the benefit of the public. The DEP's Bureau of Marine Water Monitoring will utilize the boat to monitor the quality and ecological health of coastal waters and marine organisms.

"Our coastal waters and beaches are truly New Jersey's gems," Shinn said. "It means a great deal to me that this boat is focused on ocean science 24/7. The information the boat will collect is essential for everything from watershed management to the length of our stormwater outfalls to mixing zones." The $215,000 custom-built boat is equipped to deploy real-time telemetry monitoring-buoys for the DEP's Continuous Data Monitoring Program. State-of-the-art data loggers attached to these buoys utilize sensors and probes to measure various water quality parameters 24 hours per day, seven days per week.

The addition of the boat brings the number of vessels operated by the Bureau of Marine Water Monitoring to 16. This is the second boat to be named for a former DEP commissioner. The first, no longer in service, was named in honor of the DEP's first commissioner, Richard Sullivan.
A lifelong resident of Hainesport, Burlington County, Shinn was sworn into office as the 11th commissioner of the DEP on Feb. 7, 1994. He served until the end of January 2002, holding the post longer than any other commissioner before or since.
Shinn has held regional and national leadership roles in several organizations committed to reducing air pollution. He chaired the Ozone Transport Commission and was a member of the Executive Committee of the Ozone Transport Assessment Group. He also served as vice chair and member of the Board of Directors of the Center for Clean Air Policy, a Washington-based think tank on climate change and air-quality issues.
As DEP commissioner, Shinn was asked by the administration of President Bill Clinton to appear before the United Nations to discuss climate change, sea-level rise and the DEP's Silver and Gold Track program, an effort engaging businesses and other regulated entities to become environmental stewards.

Prior to his tenure as commissioner, Shinn served in the Assembly from 1985 to 1994, representing the 8th District. He chaired Assembly committees on solid waste and land use planning. Prior to his election to the Assembly, he served as a Hainesport Committeeman from 1968 to 1977 and as a Burlington County freeholder from 1977 to 1985.

Shinn's interest in the environment started as a youth. He grew up on a farm in Hainesport. He spent summers plying the waters of Barnegat Bay on a small boat and enjoying the area's wildlife. He worked in the summers from around the 7th grade into high school cleaning up around a dock area on Long Beach Island. A vivid memory is the oily wreckage of ships torpedoed by German U-boats that washed up along local beaches during and after World War II.

These early influences and impressions evolved into strong interests as a public servant in water quality, solid waste management, farmlands protection and preservation of the Pinelands. As a township committeeman and then as freeholder, Shinn saw the seemingly endless streams of trash trucks from Philadelphia on the way to landfills in Burlington County and resolved to do something about it.

He helped negotiate an agreement in which Philadelphia and Burlington County would recycle more waste and Philadelphia would ultimately stop sending its trash to Burlington County. This led to a county-wide trash management system and construction of the Burlington County Resource Recovery Facility. He also spearheaded county bond referendums to preserve farmland and ecologically sensitive areas of the Pinelands National Reserve, efforts that have led to the protection of tens of thousands of acres in the state's largest county. He also served as vice chairman of the New Jersey Pinelands Commission from 1977 to 1985.

Following his tenure with the DEP, Shinn started S2 Concepts, a consulting firm that assisted companies in a wide variety of environmental efforts, including energy efficiency, renewable energy opportunities, recycling, technology marketing and compliance assistance. He is now active in restoring old and historic houses.

The colorful summer birds are back and I have been busy. Like all other blue birds, Indigo Buntings lack blue pigment. Their jewel-like color comes instead from microscopic structures in the feathers that refract and reflect blue light. 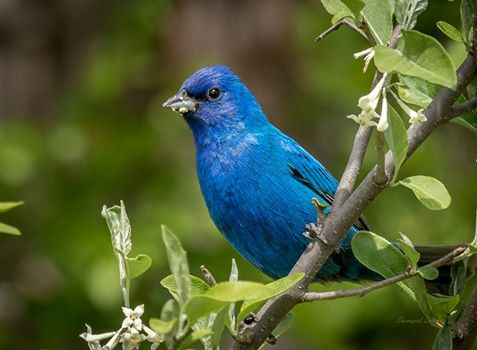 The last couple weeks of fishing have been some of the most fun I have ever had. Endless miles traveled with awesome people finding some wild bites. Getting bass to eat wood from the sand early spring in jersey is not easy. Especially if it's your first season really trying to get dialed in. Spent a lot of time this past offseason searching and talking to friends. Biggest thing I learned was through the master himself James Buonanno Jr.....you never know unless you go and give it hell no matter what the circumstance is. Never assume, fish and charge. Robert Pruszynski's glider was the game changer this past week, started it all. One kept for the table, interesting stomach contents. Breaking in the ODM RODS Genesis 3/4-4 the right way, first class people! 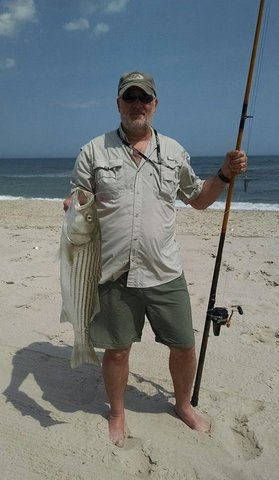 Got another Lunker on a live bait!!! Official weight coming... 3 for 7 so far a smaller crew. Nice start to the day 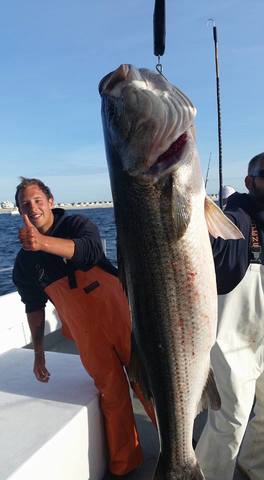 Thanks Joe Firman. I was able to stay up and tinker a bit. I'm going to fish these as soon as their all rigged up and ready to go! Need to rig the rest and add eyes to the others! Thanks again bud! BLUE MARLIN ON THE CARTERICAN

North Carolina (USA) – There has been a large wave of Blue Marlin concentrated from Wilmington to Hatteras. Boats are routinely seeing 2-3 Blue Marlin a day with a few White Marlin and Sailfish mixed in. Blue Eyes fishing out of Morehead City had one of the best days on Blue Marlin in these waters that we can remember going 7-12.

There have been some nice size Blue Marlin mixed in as well, with Reliance releasing a 600 & 500 and Hatteras Fever weighing in a 621 lbs. fish.