Monday, July 19, 2021: As I mentioned in a Facebook post, I went out onthe hopper-dredger Murden. Also onboard were Harvey Cedars officials, a SandPaper reporter/photographer team two Corps reps, including the man in charge of the LBI beach replenishment project, Keith Watson.

While the run of sand from Barnegat Inlet to just off south HC, was slow a slow go, the three-hour trip blew by, thanks to the very friendly captain and crew. Considering I revert to being a reporter very quickly, I reeled off a slew of questions the captain answered as quickly as I threw them out, though his southern drawl kept my typical rapid-fire questioning somewhat in line.

The information offered up about both the vessel and its mission was fascinating. The Army Corps folks also added their take on the experiment. I’ve mentioned in the past that Keith is a longtime buddy of mine. I get to chat with him wherever we hook up for volleyball near his BL house.

SandPaper writer Gina Scala will be offering more exacting details on out visit to the Murden.

From an eco-angle, I was greatly relieved to see there was next to no impact on marine life as the dredge sucks up bottom material through two arms suction units. Although plenty of gulls were around for any tidbits, the most they got was an occasional spearing or crab. Even the captain remarked how few living things get sucked in, most likely due to the vessels barely moving progression when taking in sand.

I’ve written in here about the theory behind this sandbar enhancement experiment. One thing is sure, it’s going to take the entire 40 days of enhancing to make a major impact. Being ultra-trite, the ocean is a big place, even when right up near shore. While each offload, maybe 10 visits a day, is a drop in the proverbial bucket, there were signs of shallowing water. That showing will hit the brakes for three days as the Murden has to break away to deepen a channel for … wait for it … a big game fishing tournament down south. Hey those game fishing guys have clout.

Sorry but I have to share a super slew of pics from my three-hour cruise. Yes, many Gilligan’s Island references were made where we first heard from the Corps that it was a “three-hour cruise – to the point that some folks busted out with the show’s theme song.

One of the two suction devices being lowered to the inlet bottom. There's one on each side. 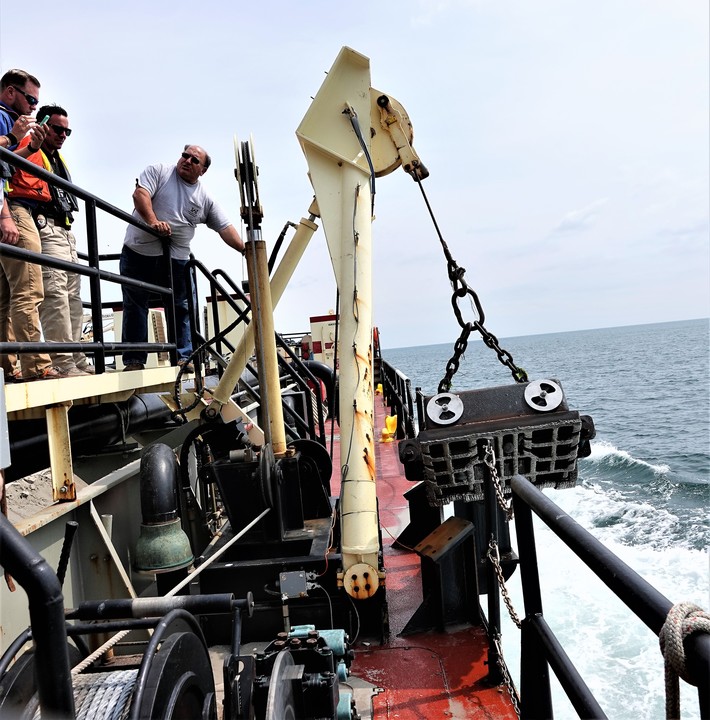 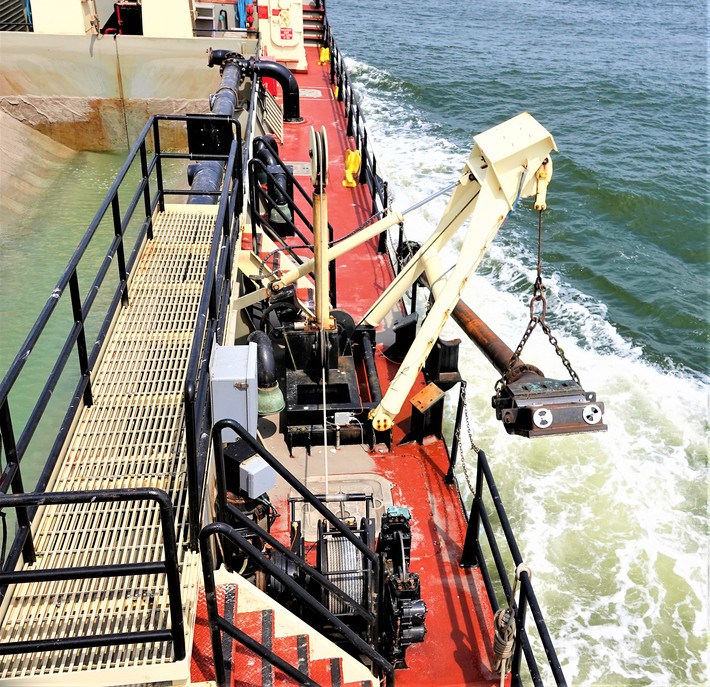 The empty hold ... followed by just water until the sand kicks in ... 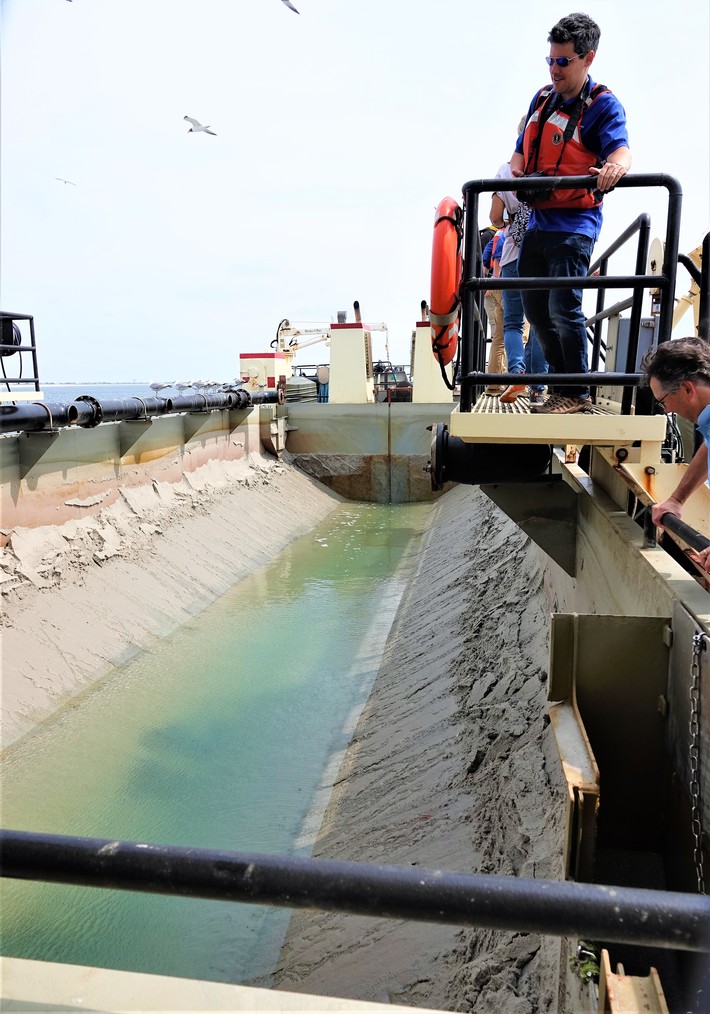 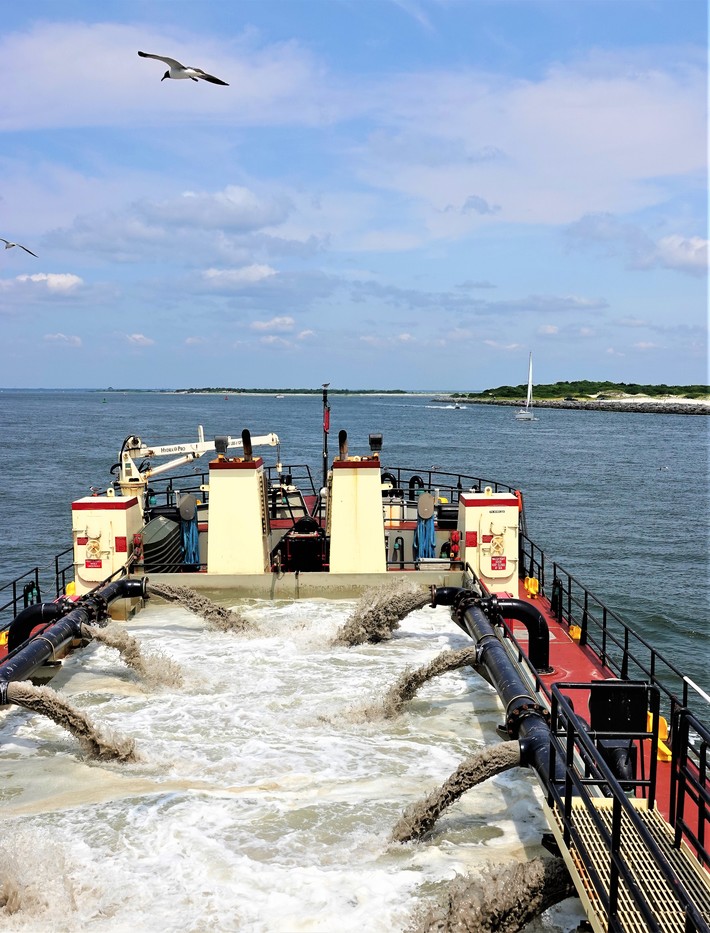 Here's a nozzle spraying in the bottom sand which the captain says is some of the best sand anywhere -- and he's been around. 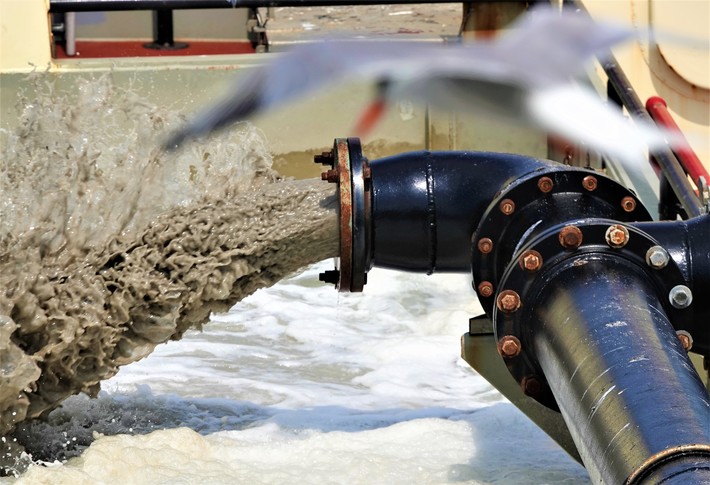 About to head toward Cedars ... The water was gorgeous. Pushing in very close to open trap doors and drop the load ... 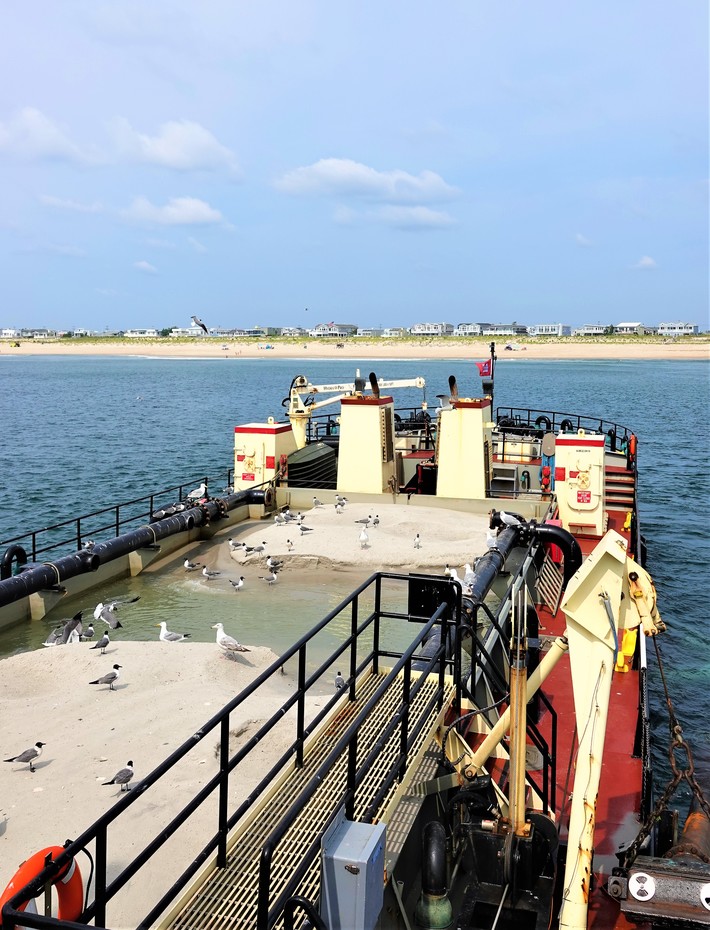 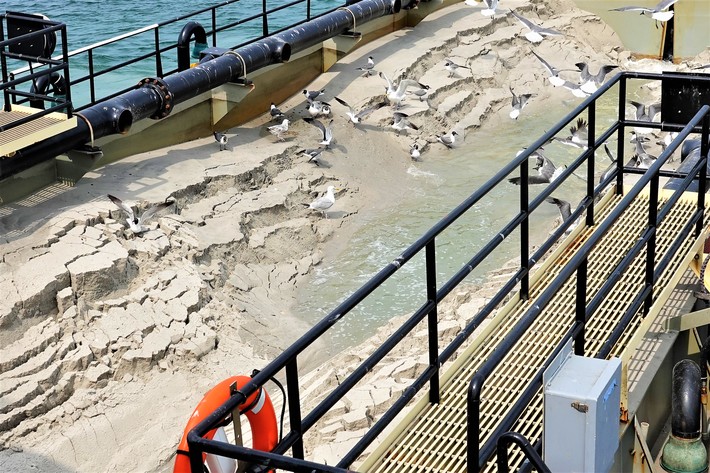 Almost out of sand ... The captain knows where there's plenty more. The mate behind the offloading ... and a fine explainer. LOCAL STUFF: Driving the Boulevard around Eighth Street in Ship Bottom you'll see a battalion of safety cones where there had been concrete islands to separate traffic lanes accessing the outgoing Causeway. They have been thoroughly removed, living proof that the Boulevard will soon have two-way traffic for the first time since the original full circle days of before-my-time times.

Gone will be any need for southbound motorists to use that crazy little westbound lane on the south side of Oscar Huber, aiming to scoot across lanes of traffic to go southbound on Central toward Wawa. The Boulevard's new southbound lanes will accommodate all southbound traffic. If you have your heart set on getting to Wawa when southbound on the Boulevard, you will have to go south and turn at Tenth Street.

Important: There will be no left turns off Central on Eight of Ninth streets -- even with two-way traffic. That is going to take some serious getting used to.

Even though I'm steadily writing up the upcoming traffic changes -- and The SandPaper has been constantly covering the matter -- the minute it's in full effect, folks will go gonzo, swearing they were never told.

I guess it goes without saying -- but I will anyway -- there is not squat that can be done at this point to change the decades-old game plan. However, NJDOT foils have told me that it is always possible that some after-the-fact tweaks can by implemented.

RUNDOWN: Puffer people arise. Your day in the bay sun has come, as blowfish, fully spawned out, have begun making another stellar showing this year. Some tail-meat seekers have exceeded 50 fish per outing … per angler!

The prime take zone is inside Barnegat Inlet, which covers some serious bay acreage. There’s no need offering exact locales, primarily because the fish themselves are covering quite some serious “creek” territory, as they fatten prior to a long journey south.

It’s uncertain how far our summer blowfish migrate southward. Florida is overloaded with them, since nobody eats them – short of when I visit there. But I’ll venture a guess those Sunshine State puffers are a whole different biomass from ours. Could local puffers do an out-to-sea move for the colder months? Further research will tell.

A new angle on puffer prowling in the bay is the use of so-named “rainbow clams,” which I can only assume are red clams rebranded. This is hook bait to accompany chum logs.

Checking out this bait, it is very tough, leathery, and apparently quite appealing to mouths down below. I’m not sure if the clam is simply salted or if a couple squirts of formaldehyde are used to firm it up.

This variation of clam baits could be a boon to striper fishing, mainly when crabs are in play.

There are still some skinny smaller blues showing, being taken from boat, jetty and even in the surf. In fact, this is one of the better cocktail blue showings in recent summers past. It is possibly a sign of a slowly returning biomass, waxing optimistically. Downwardly, I’m still not seeing any small-end young-of-year snapper blues, which would be a far surer sign of bluefish bouncing back.

No sense thinking in terms of fall choppers at this midsummer point, though I still do.

Summers are not the easiest time for me to wet a line, though when fish are out there begging to be caught, I can’t resist. This leads me to what I’ll now call an unprecedented showing of fluke in the suds. That’s not just my thinking. Far savvier surfcasters have reported landing a dozen of more flatties in short order.

Steady suds fluke all along LBI are newsworthy, though there is no glossing over the fact that virtually all these fluke are under the 18-inch minimum size limit.

Short of some very spike weakfish, sparklers remain a somber no-show. Their young-of-year are falling prey to babied stripers and fluke.

This week’s fishing report for the Beach Haven Charter Fishing Association. If you have any questions, my cell phone number is 609-290-5942 and my e-mail address is jamesghutch1@aol.com

The hot temperatures of July are warming the ocean and bay waters in the Beach Haven area. As a result of this, the captains of the Beach Haven Charter Fishing Association are finding some fishy visitors from the south on their lines.

Recently the crew of the “StarFish” trolled the Barnegat Ridge to see what they could turn up. They managed to boat four big king mackerel, keeping three for the dinner table. King mackerel are native to the south Atlantic and Gulf of Mexico.

Captain John Lewis of the “Insatiable” reports he has been catching mostly black sea bass on inshore structure with some nice sized keepers. One trip was a surprise with no sea bass, but 26 fluke came across the rails up to 4-pounds. Captain John remarked that you never know what will happen on a day’s fishing.

Captain Brett Taylor of Real Reaction Sport Fishing has been running charters practically every day of the week, even twice a day at times. After several days of hard fishing, Captain Brett reported he took a much-needed day of rest on Sunday. Recently he had the Bob Reim charter out for a 4-hour bay trip. Despite some tough tide conditions and very warm water, he was able to find a couple of cooler spots which produced over 25 shorts and 5 solid keepers for the table. He also had Matt Bailey out on his second trip of the week. They hit the Atlantic to box 10 keeper black sea bass. In addition to the sea bass, they had good action on sea robins and short fluke while managing to keep two fluke to 24-inches.

The BHCFA Junior Mates classes are in full swing with a complement of youngsters learning the details of becoming a mate. Last week’s class dealt with “man overboard” drills and boating safety.

Additional information on the Beach Haven Charter Fishing Association can be found at www.bhcfa.org.

July 16: The Best of the Eagles

July 30: Jimmy and the Parrots

August 22: Chris Fritz and the Impulsives

Surf City does not host a summer concert series.