The surf continues to kick up quite a bit. A very consistent 3- to 4-foot southerly groundswell is making bathing tricky and surf fishing a tad testy. The north end of the Island almost always gets the larger surf, so if you want to seek out gentler surfcasting – better for panfishing -- go south, young man.

South winds will become a fishing factor through Wednesday.

I haven’t talked much about black seabass since it’s a fishery that really needs no fanfare. It’s easily found by boat and it’s not very hard to grab some take-home meat. In fact, I fear it’ a tad too easy to find take-home material. That never bodes well for the species. No, I’m not raining on any parades. Enjoy the damn-decent hooking we now have. Just let me be the worrywart. I always side with the fish. It doesn’t hurt to have some of us doing that – especially when my goal is to keep everyone fishing happily in the long run.

I’m a tad surprised at the lack of queen triggerfish out there, especially near the reefs wrecks. I mention that because they had super catches of these fine eaters just to our south – dating back to spring. 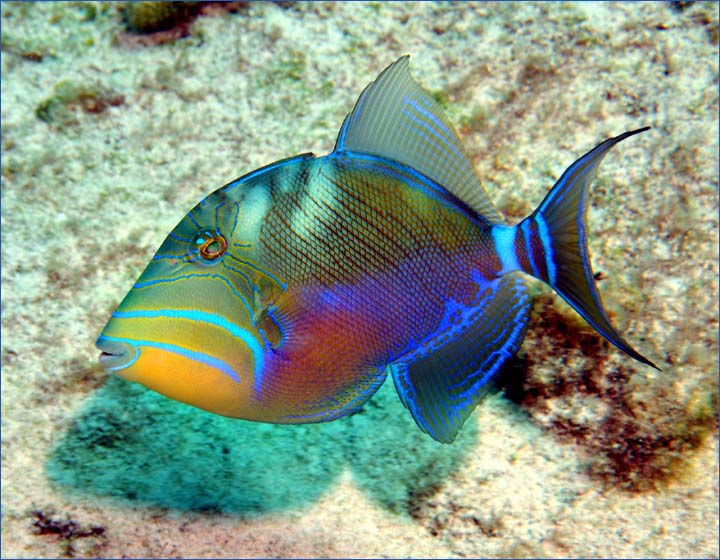 While triggerfish are hugely cyclical in our waters – and good years surely shine – it’s odd that they just hit the breaks while migrating this way. It could very well be a complex interplay between certain species avoiding the stingrays. Nothing to do with the rays themselves but more over the interest the rays create among sharks. Triggers are very susceptible to shark attacks.

Lette Magrini of Ship Bottom doubled on Spot. Of more interest is the pinky, the nails and the matching pink, with pearl teaser, kingfish rig. Lette also caught numerous Kingfish and a four inch Fluke. Photo taken by Allen. 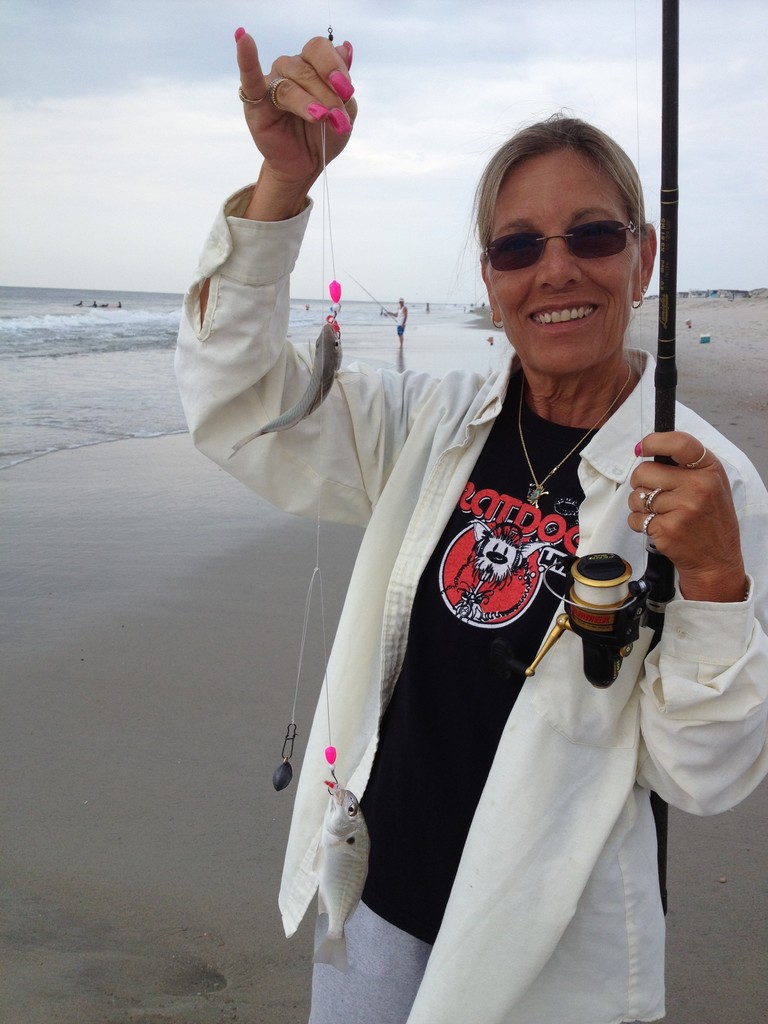 The spot croaker showing, both bay and ocean, is approaching all-time, recent history. Along with folks hooking them and even videotaping them underwater, I threw a net at a couple places and got a few each throw. Times that by the length of LBI and add in schools dark enough to create a shadow in the water and you’re talking millions of spot on-scene.

And they are edible. In Florida, they represented a lucrative fish product when that state allowed entangling nets. When those nets were banned, the annual harvest dropped by over 90 percent. That easing of harvesting of a prime breeding location might have a trickle up effect for us, as population explode and extend northward.

Cleaning is simple if you cook them whole, just behead and gut. Filleting requires larger models than we usually get here. The filleting action is very similar to that used on whit perch, though the net gain from small spot is so low it’s best to cook in the round. Meat is white and excellent. Don’t kill flavor with sauces or anything. Salt, pepper and butter.

Offshore has been sizzling. Imagine double/triple headers – all you want? It has happened, per boat reports. Again, this points to a wild and wet (it gets boring saying it the other way) White Marlin Invitational Tournament. Go to http://www.thewmit.com/.

I pulled this story segment off the news wires. I’m just offering the lead from a “Baltimore Sun” story, written by Timothy B. Wheeler, on July 16, 2012:

“When Richard Young gets done with a day of crabbing, he often calls the co-owner of his seafood business on his cellphone to let her know he's headed back in.

“Starting next week, though, the 56-year-old waterman from Dundalk is going to be checking in by phone with the Department of Natural Resources every morning as he leaves the dock in the wee hours and then again when he's caught his last crab. And by the time he gets back to land, he'll have texted in the details of his catch — while still keeping one eye on the water, of course, as he steers his workboat, the Island Girl. …”

Believe me, this is not simply a story of crabbing but of fishery management in the very near future.

Every angling organization will rage over the mere mention of daily check-ins with big brother. And I’d be on that same wavelength, hosting tunes like “Mind your own frickin’ business.” However, ranting aside, I utterly guarantee that fishery management – commercial and recreation – is flash-driving toward real-time monitoring. Why? Because they can.

If you think on-board observers on commercial vessels is the definitive move in stock management, you’re not eyeing the electronic future. The above Chesapeake Bay scenario will seem child’s play in decades to come.

Commercial guys will feel the invasive brunt of first-round, real-time onboard electronic monitoring. Not only is such Cloud-based surveillance cheaper than paying a human to monitor an oft-hostile crew but mess with the never-blinking cameras and you’ll find your vessel in port for a lengthy punishment period. I’ll estimate that within just one decade this computerized management method will be climbing aboard commercial fishing vessels.

Alarmingly for recreationalists, such methods will reach us with future shock speed. While cameras won’t be mandatory at the rec level, look for a mandatory real-time reporting in of what is being caught and kept. Getting caught with unreported catches will be very bad news for any and all scofflaws.

You can balk at this Big Brother prediction but today’s infant anglers won’t be so doubting when they’re exchanging stories about the olden days -- before compulsory daily call-ins.

I’ll even offer a minor upside to being steadily watched by The Fishery Management Man: Day-to-day real-time data taking could prevent insane regulation swings from year-to-year. No more multi-month crunching of annual catch numbers. They’ll be completed on the last day of that year.

Okay, I'm going to be that guy today... do you find that picture of the majestic marlin hanging upside down and bleeding to be a bit sad? I know I do. I'll never begrudge someone their hunting or fishing - but isn't that type of fishing what a psychiatrist term as "overcompensating". Again, I have no problem with meat fishermen, but that sure looks like an awful waste of resources to kill such a beautiful fish.

That's why the boat name tells the whole hypocritical story ... I don't think that fish is being properly cared for -- by any hot-sun stretch. What I could do with that meat -- no more.