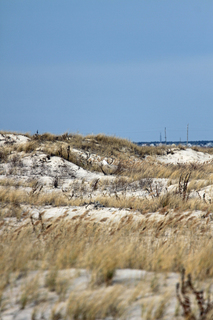 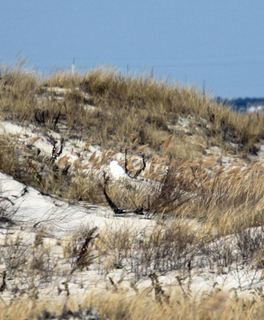 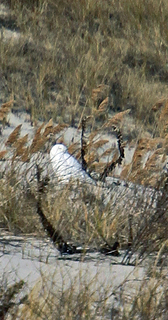 Monday, December 21, 2015: Christmas will host a full moon this year; first time in over four decades. Unfortunately, we’ll be in the midst of moist, warm-air pump out of the south, meaning clouds could prevail. Still, there could be some breaks in the cloud cover as folks head out to Thursday’s Christmas Eve midnight mass – or, in my case, 4:15 p.m. “midnight” mass at Villanova Church (St. Francis Parish), Surf City.  It’ll be dark enough for moon viewing after we let out.

Hey, why not stop by. It’s a come-as-you-feel kinda church. Dress highly casual or to the Nines – and anywhere in-between. If you’d like to help with the mass, see me at the doors, around 4.

SKY PILOTS: Other weather forecasters are now coming around in predicating those 70-degree air temps this week, right into Christmas day. Many had though upper-50s, tops. Well, if we get some sun in the Pines it could easily top 70 for a high. It’s weird to be sure – but isn’t that what weather is all about?

Might we be seeing weirder and weird, more often, than in centuries past? The record books are starting to show that.

While I cling to my conviction that we have to stop screwing up our atmosphere at any cost, I have to admit to an odd fascination with the concept of New Jersey possibly seeing milder and kinder winters. At the same time, I know such a swing would simultaneously be ruinous for countless people sure to be ravaged by the ugly side of climate change.

Although I hear anglers talking about southern fish species possibly entering our water as oceans warm, it’s not that simple -- or advantageous. We would most likely first see the loss of species we rely on. Then, what if our waters aren’t quite right for a massive showing of southerly species? Talk about be left in the climate change lurch. I worry most about the young-of-year flounder, tog, blackfish, baitfish that have to develop in the bay. Bay water temperatures hitting the 90s in summer would mean suffocation to those future stocks.

As of today, weird weather 2015 has my neighbors’ roses and even some forsythias blooming. The freeze in recent nights might put a hitch in their premature giddy-up. Of course, the arriving 60s (and up) might get them bustin’ out all over again.

The ocean remains an also-bizarre 53 – and holding in the 50s. The bay dipped to a far more seasonable 37, with some freezing in shallow-water coves, including the west side of Cedar Bonnet Island (south). Those shallows won’t be seeing ice again until next week – at the earliest.

Some Pinelands lakes got an solidish ice coating. It took a larger rock to break through the thicker ice. Hey, who can resist breaking lake ice with assorted nearby (natural) objects? No ice near spillways.

SNOWY OWL PREDICAMENT:  (Typos fixed) I’m being asked about the just arrived LBI snowy owl but I’m staying mum, at least when it comes to advertising where, exactly, it is prettily perched. Some other owl-huggers and I have decided it isn’t the best idea to go world with the whereabouts of what, to this point, may be the only snowy showing along the entire Jersey Shore. Too much lovin’, in the form of pressing and pestering crowds, could/will send the snowy up and away, possibly off to nearby, quit-quiet Little Beach.

No, I’m not even remotely suggesting the astounding bird shouldn’t be enjoyed by one and all. I’d just like to come up with some way to allow subtle viewing while also minimizing the trauma factor of zoo-like attention. While a snowy owl is able to accustom itself to even slews of clicking admirers  – and nearly everyone now has a hot camera – the problem is the few folks who press inside the boundaries -- to one-up the Jones's lens by getting closer and closer to the bird.

From an owl’s eye view, imagine creatures aiming odd contraptions (cameras) at you … and inching closer and closer. Not a big difference between a point-and-shoot camera and a gun when it comes to folks taking aim at you. 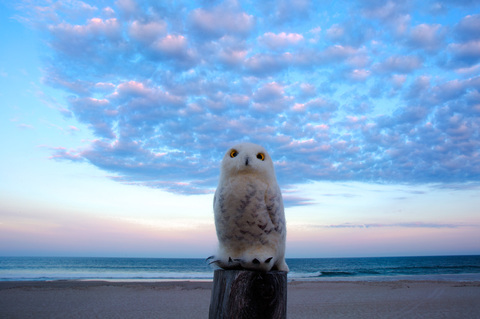 Admittedly, I have no frickin’ idea how to discretely and caringly bring adoring masses and a snowy owl into a mutually-acceptable seating arrangement. Nor can I blame those folks wanting to ogle over the owl by all but snuggling up to it.

For my part, I use lenses and some owl psychology to get close. I’m serious about that owl psychology.  To gain an owl’s confidence, I don’t aim at it – or move quickly toward it. I’ll essentially display little interest in it by seemingly looking for shells. A trick is to also walk in the other direction now and again.  My favorite make-friends move is to get undisturbingly close, then sit down, facing away. I’ll maybe doodle in the sand a bit.

I’ve had a few occasions when snowys actually flew up and landed near me. All those times I was sitting and looking oceanward with my back toward the bird. Admittedly, those rare times occurred when it was just me down there – with nary another soul in sight. Last year, I even managed to photograph a snowy that flew over and landed less than 25 feet from me, atop a refuge post. The photos show it grooming and looking around nonchalantly – signs it had no fear of me. I have to think they’re sometimes curious – or, far more likely, just wanted to be at that particular place and determined I posed no threat to its being where it wanted to be.

As to this arriving snowy, I was asked if it’s one of the ones from last year. Yes, no and not likely.  I first thought "yes" because it had the look of one all-white owl from last year. Then I got a “no” when I read the colorations changes from  year to year. Then I surmised a “not likely” because the bird had displayed some traits common to owls new to the area. Those newbie traits include an initial penchant for hanging close to, or even on, the beach, as I hear this one did on first arrival. Then, as it learns about out-and-about humans, there is a tendency to move onto no-humans-allowed refuge lands. Finally, this one has finally gone into the deep and heavily overgrown dunes, perching in places former owls hadn’t. All this subtly points to a first-timer to LBI.

I began bow-hunting carp when I was five ... and it is amazing! First shot was at Munn Lake, Haddonfield ... something like a 30-pounder landed ... heavily helped along by my dad and Mel Bennet of Manahawkin. ... 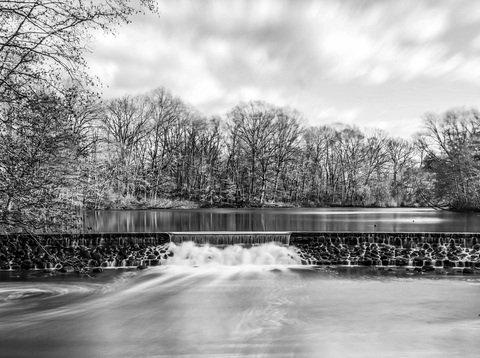 Every year the New Jersey Shellfish Industries are attacked by large schools of migrating Cownose Rays which wreak havoc on the shellfish population. These rays enter the fisheries destroy farming equipment, eat the majority of the seeded shellfish and disturb the soil leading to shellfish suffocation. Over the years these predatory animals have grown in numbers due to the overfishing of their natural predator the shark. A newly created conservation effort called "Save A Clam" founded by Chuck Berwick who is the President and General Manager of Bangers Sport Shop in Winslow, NJ is looking to help control the Cownose Ray population through the legalization of Saltwater Bowfishing for this invasive species. Being a conservation effort we would like reduce the population of the Cownose Rays to help out the shellfish industries but still maintain a healthy population of the species. Our goals also include encouraging the public to utilize the harvested Cownose Rays as an alternative viable food source. By signing this petition you would like the New Jersey lawmakers to pass saltwater bowfishing for Cownose Rays in order to protect the New Jersey shellfish industries. More information regarding this conservation effort can be found on our website at SaveAClam.com Thank you for your support! 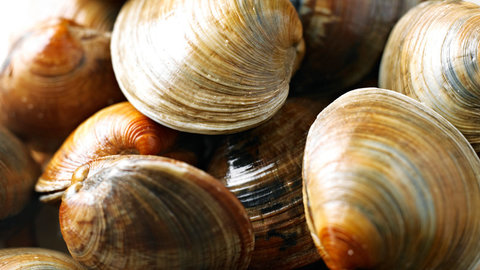 Well, its been a busy month. Early on we experienced some of the warmest, nicest December weather in memory. We sailed a lot of trips, and had some excellent fishing. Limits of Sea bass to 5lbs were common, with more and more Cod mixing in as the month progresses. A bit breezy now, but we plan on wrapping up the month with a few more Offshore Sea bass trips before that season closes on the 31st. Starting on Jan. 1st, we will be targeting Cod for the remainder of the winter. A
s always, we will be sailing every day, weather permitting, by reservation. We have a brand new forced hot air heating system installed in the main cabin.

In other news, the KING COD II has been sold. We thank everyone for a great couple of seasons with that boat, but now look forward to concentrating on providing you with the excellent service, and outstanding fishing we are known for, aboard the BIG, fast, 41ft Hatteras, the KING COD! We will have VERY competitive pricing on our Fluke trips this summer, running open boat, and private charters at party boat prices! We know the Bay better than anyone else, and slip the "Hatt" into places the others won't even dare to try! Book your prime early season dates now...

Last few hours to the official end of Fall and still coming tight to quality fish , what will winter bring come tomorrow. Will see.

There is an option in this Addendum that would allow for a smaller size limit in Delaware Bay for NJ.  It would set up NJ as a separate region but the NJ would have to stay at the same size limit as CT and NY except for the Delaware bay. Example: The NJ, CT and NY would be at 5 fish 18inches and 128 day season. Delaware Bay would be 4 fish 17inches and 4 fish bag limit. I have attached the Addendum.  I have also attached the JCAA Newspaper that went to press today. It was too late to get it in but I did write and interesting article on the summer flounder situation.  I did make a mistake, I reference it as a amendment instead of an addendum.

In 2014, the Board approved Addendum XXV to shift away from traditional use of state-by-state harvest targets under conservation equivalency to use of an alternative regional strategy for managing summer flounder recreational fisheries. Based on its success in keeping recreational harvest within the RHL and providing greater regulatory consistency among neighboring states, this strategy was extended for use in 2015. State-by-state harvest targets previously utilized under conservation equivalency created difficulties for some states as overages occurred due largely to state shares and limits not reflecting local summer flounder abundance and its availability to recreational fishermen. In 2014 and 2015 management regions were the following: 1) Massachusetts; 2) Rhode Island; 3) Connecticut-New Jersey; 4) Delaware-Virginia; and 5) North Carolina.

The Draft Addendum also proposes two options for the 2016 black sea bass recreational fishery (1) coastwide measures or (2) the continued use of management measures by northern (Massachusetts – New Jersey) and southern regions (Delaware – North Carolina). The regional management approach has been used since 2011 and offers advantages over coastwide regulations by addressing geographic differences in the stock (size, abundance and seasonality) while maintaining the consistent application of management measures by neighboring states.

Fishermen and other interested groups are encouraged to provide input on Draft Addendum XXVII either by attending state public hearings or providing written comment. The Draft Addendum is available at  http://www.asmfc.org/files/PublicInput/DraftAddendumXXVII_PublicCom... and can also be accessed on the Commission website (
www.asmfc.org) under Public Input. Public comment will be accepted until 5:00 PM (EST) on
January 21, 2016 and should be forwarded to Kirby Rootes-Murdy, Fishery Management Plan Coordinator, 1050 N. Highland St., Suite 200 A-N, Arlington, Virginia 22201; 703.842.0741 (fax) or at
krootes-murdy@asmfc.org   (Subject line: Draft Addendum XXVII). For more information, please contact Kirby Rootes-Murdy at
krootes-murdy@asmfc.org or 703.842.0740.

Tell me this wouldn't brighten up a Christmas dinner ... 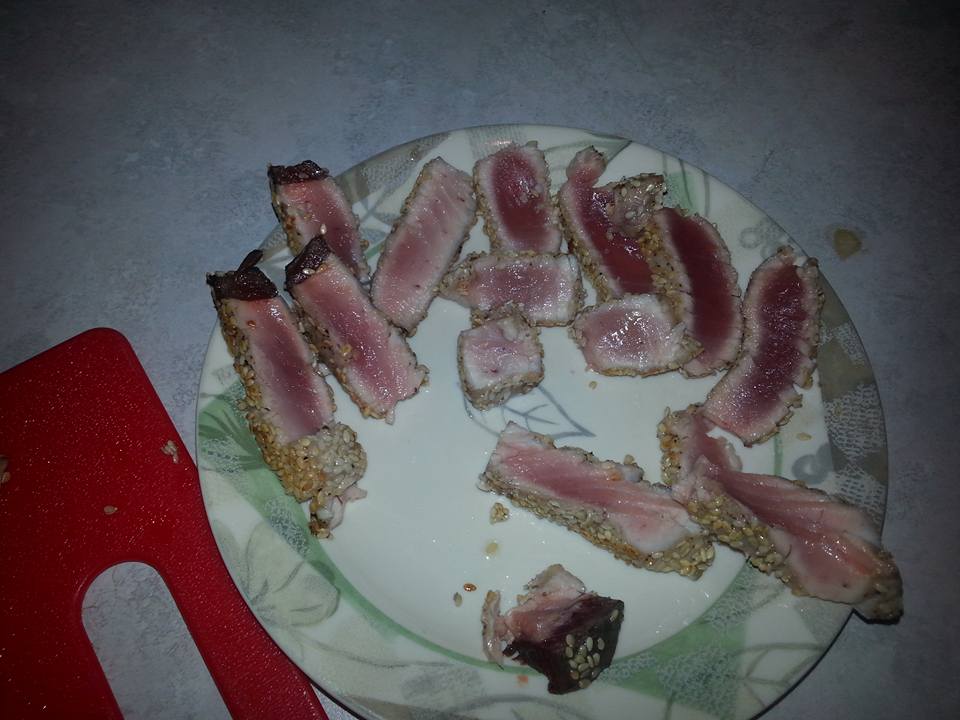