Monday, December 17, 2012: Thanks for the reports. Seems some folks are really having a ball with schoolie bass, weather permitting. Bets hooking is bait-based, though boat anglers are jigging and even trolling a bit.

One boat angler had a “typical” tale. He got out and damn if he didn’t leave his tackle box behind. That’s when he grabbed a good old Hopkins hanging around his vessel. And the bass bit like nobody’s business.

HOPKINS CHAT: You sure don’t hear as much about those archetypal Hopkins lures, though they still sell pretty well.

Interestingly, Hopkins fall somewhere between a spoon and jig. Personally, I’ve always had the best luck with Hopkins by jigging them when drift fishing from boat. I fall, rarer gold Hopkins really seem to work best on certain days, often out -hooking silvers.

From the beach, it’s tougher to jig a Hopkins without getting too much slack on an upswing. In the surf, they work best as a spoon, especially when coupled with a teaser. In fact, as a teasered spoon, they seem to act more as a decoy, convincing a gamefish it’s stealing a meal from a smaller fish – thus the high frequency of gamefish taken on the teaser and not the Hopkins.

Interestingly, a Hopkins with thick bucktailed trebles loses a load of its already limited action. However, the added color sparks visual responses. Surgical tube adds both color and an ideal waggle to a Hopkins.

I often write about the hundreds for Hopkins I’ve found over the years metal detecting the beach after storms. During nearly four decades of detecting, I also detected the change in metal quality with the (alleged) stainless steel Hopkins.

Back in the day, going back something like 30 years, Hopkins were a metal of beauty. The stainless was of such a high quality, it could lie buried in wet saltwater sands for years/decades and still come out in utterly shiny mint condition -- short of some rusty stains where the trebles had rotted off (stains easily removed with Whink rust remover).

Then, the fairly slow switchover to lower quality stainless, which, would discolor and lightly pit after long burials buried in the sand.

Now, it’s really essential to rinse off a Hopkins when done using. A modern one lost in the sand lasts mere months before the damage is ugly enough to render the lure “bluefishing only.” 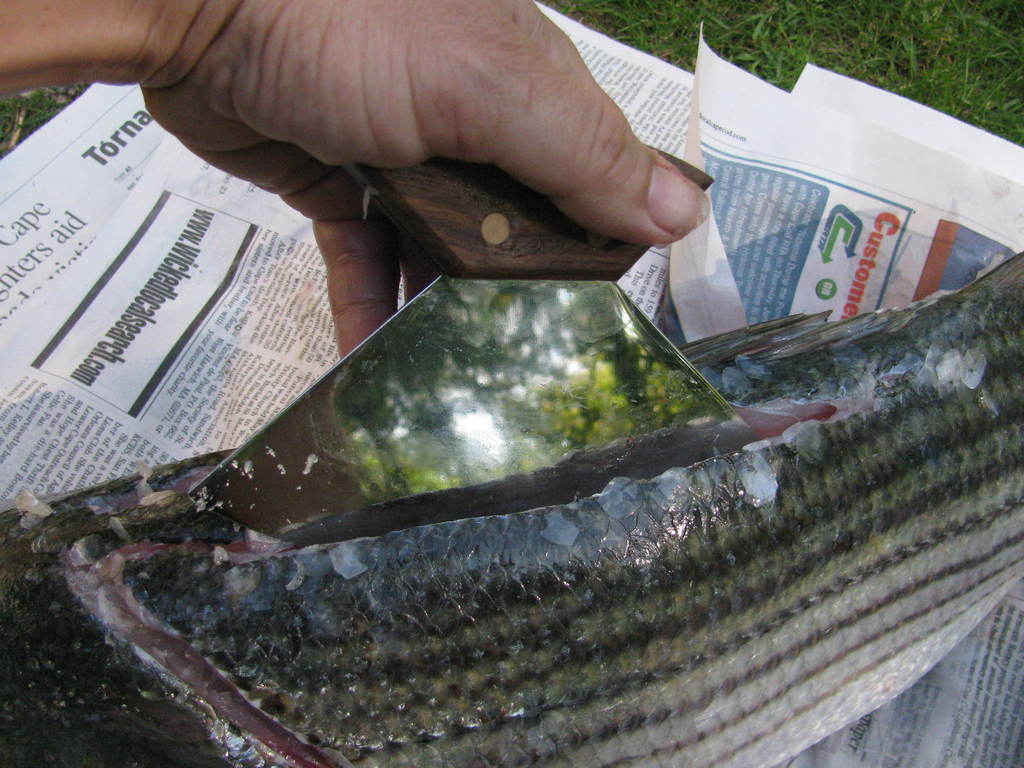 In a half-century of overfishing, the stock has shown a dramatic decline — from 90 billion fish that were 1 year old or younger 50 years ago, to 18 billion that same age in 2010, according to the commission.

The 13 to 3 vote to rebuild the population was cheered by environmental groups and activists who dubbed menhaden the most important fish because it is a staple diet for large predator fish such as whales and porpoises, and large birds such as eagles and osprey.

But Virginia state marine officials and fishermen said it would devastate a fishing economy valued at $40 million, leading to job cuts at the state's menhaden processing plants in Reedville and down a long supply chain.

Virginia is the only state among 15 represented on the commission that allows a corporate fishing organization, Omega Protein, to harvest menhaden. Eighty percent of menhaden harvested on the Atlantic coast are caught in Virginia, which will bear the brunt of the cut's impact.

When Kellum suggested at the end of his statement that the reduction was unnecessary because the menhaden “stock is healthy,” the audience erupted with catcalls and booing, which drew a firm rebuke from the commission chairman.

“No! I will clear this room,” shouted Louis B. Daniel III, the chairman. “No outbursts, please! We have extremely qualified commissioners around this table and they will be allowed to give their opinion.” At least four Maryland Natural Resources Police officers stood by.

But Kellum and Jack Travelstead, the Virginia Marine Resources Commission director, who sat beside him, could not stop the action they fought at every step, first putting forth a motion to wait two years before acting, and when that failed, putting forth motions to shave a significant percentage off each limit proposed.

“I'm sympathetic to Virginia,” said William J. Goldsborough, Chesapeake Bay Foundation fisheries director, who sits on the commission. But “I think we're at a point where 80 percent of the catch is being taken by one jurisdiction, and 80 percent of the effect is going to happen there. It's a high risk, high reward prospect.”

Goldsborough strongly endorsed the 20 percent reduction, knowing that the 25 percent drop coveted by his organization was unlikely.

The vote was a good first step, said Jay Odell, Mid-Atlantic marine program director for the Nature Conservancy. “We recognize that the commission needed to chart a course to bring the management of menhaden into the 21st Century.”

H. Bruce Franklin, whose book, “The Most Important Fish In the Sea,” brought the plight of menhaden to light, wanted a larger reduction but settled for what he got.

“This is historic... because they've done nothing to protect this fish,” Franklin said. “It's the basis of the food chain. It has the omega-3 fatty acids that all these predators need to survive.”

But the historic vote saddened Ken Pinkard, a representative of the United Food and Commercial Workers union that serves the mostly black community of fishermen who've worked the ocean off Reedville for more than a century.

The decrease is based on the 2009 to 2011 three year catch average and is expected to take effect, if ratified by the member ASMFC states, in the 2013 fishing season. The restriction will remain in place for at least the next two years until the ASMFC evaluates the next Atlantic menhaden stock assessment, which is expected to be completed by the National Marine Fisheries Service by the end of 2014.

The restriction will limit the total amount of Atlantic menhaden that can be landed by both the reduction fishery, conducted by Omega Protein, and the bait fisheries, conducted by other third parties, to 170,800 metric tons. Omega Protein's Atlantic menhaden catch averaged approximately 167,000 metric tons per year based on the 2009 to 2011 three year average. In 2011 the Company's Atlantic menhaden catch was 174,000 metric tons. The ASMFC also voted to allocate the quota to each state based on historical catch data, and the Company expects that Virginia will preserve the reduction fisheries historic share of total reduction and bait landings.

“Omega Protein has been fishing these Atlantic waters for a century and no one is more interested in the sustainability of the resource than we are. However, we are disappointed by the ASMFC's decision to adopt these harvest reductions,” said Bret D. Scholtes, Chief Executive Officer of Omega Protein. “There is significant scientific consensus that the most recent assessment of the Atlantic menhaden stock has a negative bias that underestimates the population. We therefore believe these measures are premature, if not wholly unnecessary. Omega Protein remains committed to participating in future management actions, and remains hopeful for a more science-based decision making process that preserves both the menhaden resource and the working communities whose economies are sustained by the menhaden fishery.”
(((((((((((((((((((()))))))))))))))))))

BIDDEFORD, Maine (AP) — Three researchers are taking part in a study looking at the mortality rates of skates that are caught in scallop dredges and then thrown overboard in waters off New England.

The University of New England in Biddeford says one of its professors, marine biologist James Sulikowski, is one of three co-investigators who have received a $1.1 million federal fishery grant to evaluate the mortality rates of skates inadvertently caught by scallop boats fishing on the Georges Bank fishing grounds east of Cape Cod.

Joining Sulikowski on the two-year project are David Rudders of the Virginia Institute of Marine Science, and John Mandelman, from the New England Aquarium. Here’s another example of a baitball, here called a tornado. These are larger fish either responding to the diver or, more likely, simply in a nonfeeding state, where they circle to present a foreboding shape to any predators. In one of the stills, the ball truly looks like a monstrous gag grouper.