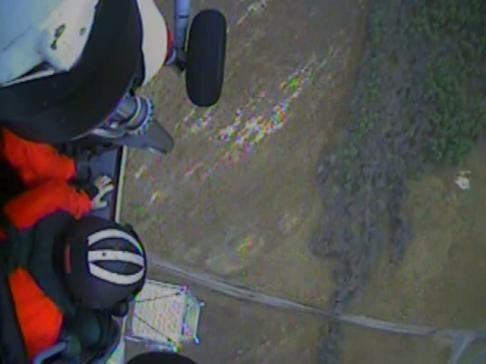 A Coast Guard aircrew aboard an MH-60 Jayhawk helicopter from Coast Guard Air Station Elizabeth City, N.C., takes off from Coast Guard Air Station Atlantic City, N.J. carrying an aid to navigation tower, Wednesday, Dec. 5, 2012. The tower was flown to the Barnegat Light jetty where it replaced an aid that was knocked down from Hurricane Sandy. Aids to Navigation Team Cape May personnel outfitted the tower with a dayboard and lighting equipment to help ensure the safety of mariners transiting the Barnegat Light jetty. U.S. Coast Guard photo by Petty Officer 1st Class Brandyn Hill. Read more: http://www.dvidshub.net/video/192594/coast-guard-flies-tower-nj-jet...

Monday, December 10, 2012: Yet another loser of a fishing day – but a further beneficial hosing down of the LBI streets. We’re up to nearly 2.5 inches of rain in this latest rain event. Unfortunately, there’s enough rain to flood more than few crawlspaces, making the simultaneous drying of home interiors a lot tougher – as moisture rises up in via evaporation.

Things should get drier from here, but skies will stay iffy, though mildish, through much of the week.

In the woods, I heard quite a few spring peepers prematurely croaking, fully unaware that they’re at the absolute wrong end of winter. Speaking of which, the Weather Service has been a little noisier in exerting its own meteorological “winter” season, beginning on December 1. It actually makes more sense than Dec. 21. I also like the way they begin spring earlier than the calendars.

We’re well into fall/winter togging season but the weather has played havoc with running out after blackfish. That’s not the worst thing considering how hurting that fishery is.

Despite a complex system of closures and opening to protect the breeding season, tog are still not coming back with any authority. I blame unnatural natural predation, as over-populated fluke and even striped bass – protected by mankind -- fed voraciously on the tautog young-of-year, before they can get out of the bays and inlets.

Sure, we had our fun blaming Asian poachers for nabbing live tog for the sushi market but there’s no way those fish-scalpers had that much impact on the big-picture tog biomass predicament. What’s more, that abusive market has declined steadily, thanks to powerful enforcement and prohibitive transportation costs for those muling live tog down the coast.

Talk about an Alice’ Restaurant scenario. You get thrown into jail as a “mule,” and everyone is cool with that -- until they hear you were muling blackfish.”

“What you mean you were muling blackfish, cracker!?”

Fished Saturday with Tom Morford Jr. and his son Matt on Tom's Black Jack from Baker's Marina on the Bay in Highlands. Blackfishing was tough, but we had a pleasant surprise when stripers were up on our way in at Sandy Hook late in the afternoon. Released bass up to 35 inches that hit everything cast to them. Saw one blast a herring out of the water just a few feet off the stern.