Monday, December 07, 2015: Talk about a drop-off! I drive miles of beach today and saw one – count ‘em – surfcaster where we had dozens – if not hundreds – casting over the weekend. Obviously, the end of the LBI Surf Fishing Classic played a huge part in the departure of surfcasters but I think it’s also the need of many an over-dedicated angler to get back to work – or start fishing for a new job. I know this because a few guys I know have been taking many liberties and sick days to take in what is turning into an astoundingly beautiful and fishiferous late fall.

Alot of fun this morning at ibsp Obviously, boat anglers might need a greater self-persuading as that bite is still blazing. Many boat bassers actually need some down time to rest their aching arms. Still too much groundswell for an easy kayak paddle out. Experienced yakers can make it.

Below: You can always launch bayside ... I absolutely do not want to get into a pissing contest with those who feel the striped bass numbers are dangerously down but you sure as bloody hell can’t tell it from the insane striper fishing being seen from New England down to here. I will listen to chatter about larger breeders being too readily kept just for show back home. Even there, since fishing began bringing home the trophy fish has been a high-impact part of the sport. My dad loved wooing us with Mannly fish. 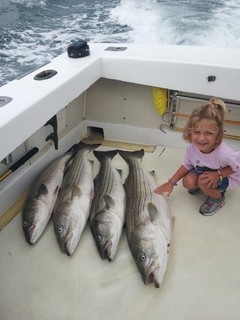 I’ll also open a can of bloodworms by suggesting the catch-and-release ration this fall has been highly admirable. Sure, dozens of lunkers have hit the scales but I can offer you dozens of reports where, cumulatively, thousands of bass were caught and rapidly and properly released. I say “properly” because I haven’t come across a single DOA undersized bass washed ashore. The racks from fileted legal bass? Yes, a few of them have slid ashore. Those are filet-and-release fish, which is legal -- but sometime messy.

I’m also getting reports of togging better than we’ve seen in years. My only minor gripe about togging is the famed catch-for-others syndrome, whereby a better angler meets his/her bag limit then helps other on-boarders meet their bags. Of course, bottom fishermen play it close to the regulatory vest. They know how quickly they can come under heavy dockside scrutiny by the boys in green. What’s more, one should appreciate that wreck fishermen gotta make tog hay when the sun shines. Weather and ocean conditions can keep them in-port for days and weeks on end. GIFTING … AGAIN: The spouses -- and such – of anglers are again asking what Christmas gifts to give their significant angling other. I used to have all the gift-giving answers but I’ve backed off a bit due to prices. Seriously, I still love to suggest upper-end reels but where they used to be a couple/few hundred dollars, designer reels, like Van Staal, are now approaching four figures, while holiday spending budgets have not increased proportionately – if at all.

Personally, I think a slew of plugs and better jigs can be gathered into a great, much-appreciated gift packet.

Hint: Do not go for highly discounted “bin” lures. There’s often a reason their lounging in the “Reduced 75 percent” realm. Hell, some of plug colors in there can even scare off diving gulls.

As to what is currently hot for a combo-equipment gift, the shops are truly in the know. In some cases, they even know the preferences of individuals being bought for.

Custom-made plugs and jigs are one gift concept that is a bit out of the shop realm – shop realms being the finest and truest places to but fishing stuff. However, shops can sometimes suggest custom plug-builders selling their handcrafted wares.

For readers who have been with me forever, you have to remember the Christmas a gal asked me what brand-new SUV she should get for her husband. I believe we settled on a Cadillac Escalade … though only after opting out of a Lexus at the last minute. True story. 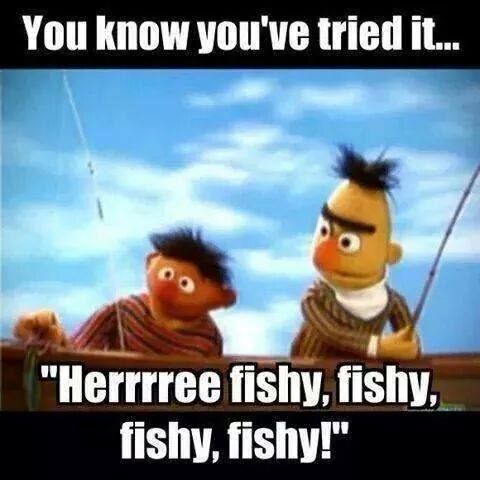 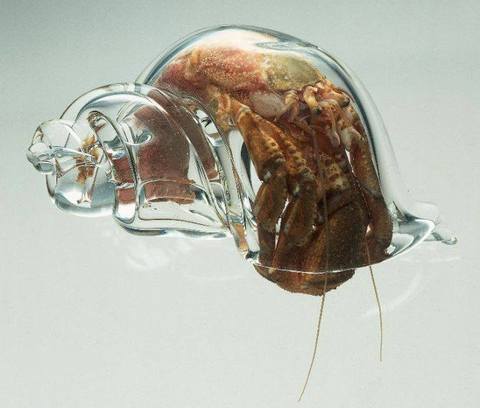 Couldnt make it out to the edge as we originally planned to do this weekend so made a shorter jog offshore for some cool water jigging and bottom fishing to get a small break from Tera Firma. Louie and I Hopped on "C-Dawgs" with good friend
David Huberman and his crew, including his partner in crime Miss Claire Lundy. Not and edge run but still a fun day with lots of bent rods and a solid mix of cod, plus size sea bass and some of the biggest porgy (scup) ive seen in a long time. Lots of filleting at the end of the day and a new species first encounter with this angry monkfish. Good times! managed some nice shots of Claire with some solid seabass on the Colt Sniper Jig! Fished IBSP today 12-6-15 had boats birds bait everywhere. Chased them from sand bar to sand bar casting a surface plug. Caught striped bass from 25" to 29" on every cast missed some on a slow hook up but still endended up with 43 bass and 1 keeper. What a beautiful day. 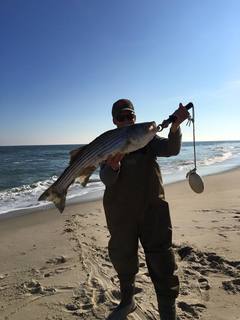 Amazing way to end a 2 year run on the 25' Parker. Ended up with over 40 fish today and over 100 on the season. Jigging and plugging all morning with light tackle. Fish were feeding on herring and peanut bunker, some awesome sights and great footage. 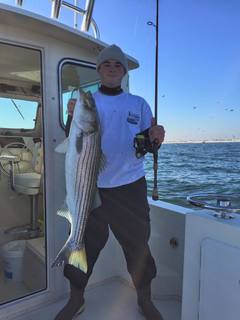 Well im done with stripers for the 2015 season...it was a fun year with lots of fish and fun with some good friends. I loved my time out east and back in jersey..ready for spring! 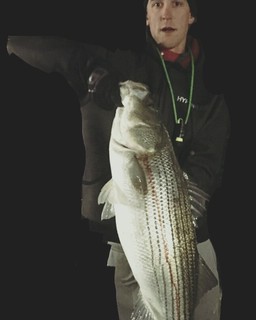 Great day today catching bass and blues busting up peanuts and herring. Thanks George Cox you are the man. Kyle finally got to see it 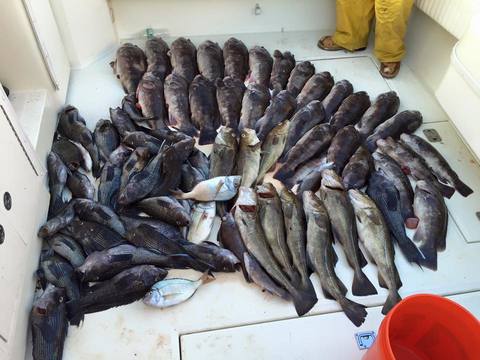 Looking forward to my first NY Venue and meeting folks that I only know online. Below is on read regarding photographing snowy owls. I'm definitely NOT in full agreement but it does offer some advice.

Getting too close to the gorgeous birds can fatally freak them out.

As snowy owls begin to migrate south from the Arctic this winter, an Ohio wildlife rehabilitator is warning photographers that they shouldn’t get too close in an attempt to get the perfect shot.

“The wild animal doesn’t know you just want to see it,” Heather Tuttle, manager atBack to the Wild in Castalia, Ohio, told The Huffington Post. “all they see is this large predatory animal that’s getting too close for comfort.” BACK TO THE WILD/FACEBOOKA snowy owl at Back to the Wild wildlife sanctuary in Castalia, Ohio.

Pursuing a wild animal for a photo op is never a good idea, Tuttle said, but it poses a particular danger for snowy owls that have just migrated from the Arctic tundra.

Because the birds have just completed a long flight, she said, many are short on energy. If a person frightens the bird away, the animal may spend all of its remaining energy fleeing, having little left for necessary hunting.

“We get them in and they’re just starved almost completely,” Tuttle said.

While most snowy owls remain in the Arctic year-round, occasionally some owls will head south during the winter in what’s known as an “irruption.” But there’s no consistent way to predict how many owls may head south in a given year, according to Andrew Farnsworth, Cornell Lab of Ornithology research associate and project leader for migration forecaster BirdCast.

“In the past, there has been some ability to suggest which years might be big irruptions by looking at the timing of previous years' irruptions and considering the rodent populations and breeding success of the species,” Farnsworth told HuffPost in an email.

This year, Farnsworth said, the Midwest is seeing particularly high snowy owl numbers, though there have also been news reports of the birds in the Northeast.

But he explained there are numerous factors that influence the irruptions, including fluctuating rodent populations that may push the birds southward to search for food, as well as climate changes in the Arctic that can change the birds’ winter behavior. He also noted that not all birds show up weak and starving -- many arrive in perfectly healthy condition. That's partially because of natural variation between individual birds, as well as the food resources in the birds' homes and the different reasons they migrated in the first place. BACK TO THE WILD/FACEBOOKA snowy owl at Back to the Wild in Castalia, Ohio.

Last year, Back to the Wild took in about three snowy owls that were starved so badly the sanctuary was unable to save them, Tuttle said. Of course, when someone brings in a starving owl — usually because they’ve found the bird collapsed in their yard — it’s impossible to say exactly what led up to the starvation, though other wildlife experts have also noted the threat that photographers and birdwatchers can pose.

Of course, it's possible to photograph a snowy owl responsibly. If you spot an owl at a distance where the bird seems comfortable, just “don’t get any closer,” Tuttle said. If the owl starts to stiffen up, or starts looking around, freeze and then move back slowly.

If you’re serious about getting good shots of the beautiful birds, Tuttle said, invest in a camera with a good zoom feature. Problems arise when people with cameras with minimal zoom -- like those found on many smartphones -- find themselves having to get physically closer to get a decent shot.

She also said that people would be doing the birds a favor if they refrained from posting the locations of owls online, as the sheer number of people that show up can also be highly stressful for the birds. 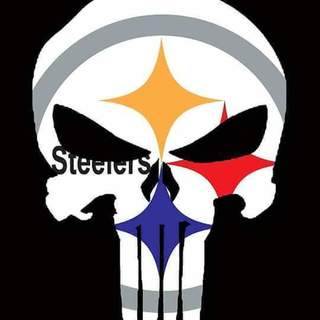