RUNDOWN: Mid-December and it’s actually smokin’ out there. It was quite the odd nearing-winter sight over the weekend to see hordes of surfcasters shouldering around prime beachfronts, a-pop with stripers. The plugging action was almost exclusively a.m.-oriented. The loaded locales were primarily just north of mid-Island but I found my own striper flurry more toward the south.

Many of the bested stripers had plenty enough inch-age to place them in the fat-and-keepable category, though catch-and-release loomed large, per usual in these parts.  Surprisingly, some bass were even caught on poppers, though smaller metals, teasers, baitfish-shaped plastics and, leading the artificial pack, those needlefish plugs.

As for the short-term predictability of the bass bite, it hung out in a few neighborhoods for mornings on end. However, late-fall fishing is always a crap shoot so getting in on the action for the upcoming holiday days will come down to having good LBI contacts and asking around the always info-issuing tackle shops.

I was a bit late to the hooking but had a modest three-fish landing run far from the maddening crowd. I was also skunked late day. Going something like 0-20 for my last evening plug sessions. I was told the same sunset nothingness applied to beaches that had gone bass ballistic at sunrise. That’s all way odd, considering the multi-decade tradition of bailing autumnal schoolie bass strictly at sundown.

Of course, this has already been a fall for the out-thererecord books. Along with the utter absence of migratory forage fish, I can’t recall getting a December ocean reading above 50 and last week saw a 54-degree reading in the suds – and I use the latest in infrared temperature-taking devices.

Sure, the recent frozen puddle nights could quickly knock the sea’s surface temps down but the sun beat down factor and bouts of northeast winds (still capable of ushering in warmer water) have regularly compensated for quick-chills all fall and could happen again this week. By the by, my first year at my current job (1988), saw a Sunday night temperature of 5 degrees. I was soon ice fishing at Collin’s Cove (Mullica River) atop the thickest December ice locals there had ever seen. Global warming or simply the way of all weather? Whadda debate.

Jay, I faithfully read your column even though I don’t fish. … You’ve gotten my fishing fiancé into collecting old-fashioned lures. Would old lures make good gifts? Any suggestions?

Great questions but please read this carefully. Vintage plugs are an absolutely ideal gift – be it the biggy or stocking stuffer -- for an angler who is deeply or even superficially into the oldies. I swear that half of all serious anglers now dabble in fishing collectibles. However, absolutely do not break the bank when shopping vintage lures! Just because you can get a glowing “old-fashioned” lure/plug for $500 on eBay (“Buy Now”) or at some antique shop, does not equate to displaying a Zale’s-type affection. It’s way too risky.

Personally, I have been fully ecstatic over a couple/few sincerely shopped oldie lures.

How to pick ‘em? Nowadays, a quick insight can be had in a Google instant. Google the words type in “collecting old fishing lures” and an entire page of amazing sites jumps forth. It’s not only a fun read but it’s an instant insight into what worth what. However, be fully aware that, hereabouts, we collect saltwater lures.

While I collect both saltwater and larger freshwater (pike and muskie) plugs, the freshwater fishing collectibles market is (pun intended) saturated. Many items are too common at any price while upper-end items have gone skyscraper.

Interestingly, saltwater plugs are actually a fairly recent industrial phenomenon, dating back a mere 60 years or so. To me, that makes them highly collectible, considering how few were kept in mint/boxed condition.

And that’s my biggest tip: Hunt for excellent to mint condition lures, still boxed (even plastic boxes are cool), that you personally think look, well, pretty.

It’s already apparent that the realm of saltwater fishing collectibles has no idea what plug colors or shapes are going to appreciate in the future. Simply picking an oldie based on personal aesthetic preferences is as good a criterion as any.

If shopping local antique shops (or even some tackle shops) for fishing plugs, one decent way to assure a boxed plug is older (prior to circa 1980) is the lack of a barcode on the box. Better yet, read the manufacturer information on the box. An address showing no Zip Code times it before 1963. A phone number with no area code hales from before circa 1950. A phone number with two letters followed by five numbers is prior to the mid-1960s, but more often prior to 1960. A phone with two letters followed by three number is way back in time – and adds immensely to the plug’s value.

I’ve written before that certain older empty (!) boxes, even when empty, sell alone for a king’s ransom.

By the by, many tackle shops know of folks who collect plugs (sometimes by the thousands) and can pass on word that you’d like to buy some reasonably-priced mint “extras” or “dupes” (duplicates) they might have.

One final note, even older plugs with no boxes make amazingly fun gifts – and can appreciate to lofty resale levels -- often a very legitimate reason for collecting things. Don’t hesitate to grab a lot (an expression for a collection) of loose plugs that can be either collected or used functionally for fishing. I’m a full-blown proponent of using less-than-perfect vintage plugs to try on reluctant bass and such. I firmly believe that bass get warier and warier of certain oft-seen plugs cast their way, even if they don’t bite on them. Adding a new look can be that tiny edge anglers need to draw hits from hesitant stripers.

By the by, eBay ain’t half bad when it comes to buying lots/groups of those loose (unboxed) vintage plugs.

Twice in the last last week while plugging I've found windowpanes (type of flounder) that have been washed up on the sand. One made it's way back on its own but the other I had to pick up and put back because it was high and dry. Do you think that they're being chased or just swept up by the shorebreak while they're feeding? Just wondering. …

I've found a couple blue rubber gloves in S.C. this weekend. Now I know where they're coming from. That's sad.

(What is driving these nearshore flounder onto the sand is simple: Stripers.

Autumnal life must be hell for these soft-bodied, easily swallowed and highly digestible flatfish. They’re dead meat in the face of an insane bass biomass – currently sucking down every edible living item in nearshore waters.,

Bass will – and do -- down dozens of winter flounder at one sitting. They’ll surely do the same gluttonous gorging of windowpane flounder. In fact, these flatties haven’t got a prayer – except beaching themselves and taking future doom over instantaneous doom. Two dead ends and you still gotta choose.

While past studies have windowpanes going offshore to overwinter, recent seine studies indicate they hang in close to shore throughout the year.

Yet another species that is remarkably cyclical in population, recent years have seen a decline in windowpane numbers like never before. Bass attrition? I’m done trying to presume – or get other folks to listen. 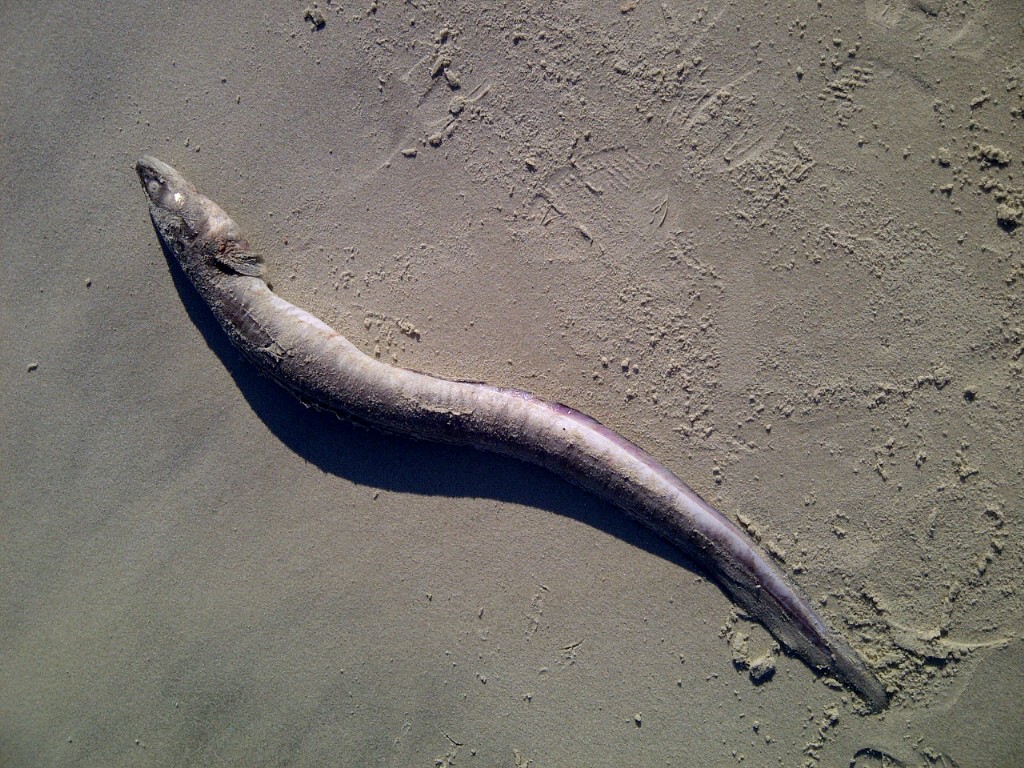 Took a ride to the point yesterday and saw a herring gull pecking away at what I first thought was a skinny dogfish. Turned out to be a 35.5' eel. Can you tell me what kind of eel it is? Thanks for your help.
Dave C”

(It’s an American eel. Yep, they easily get that large – even double the size of this one. It’s about migratory age – for a male eel. It’s a migration from which they never return. Maybe this one was practicing. J-mann)