Monday, August 24, 2015: Wind is low and slow today, swinging to the south as the day goes on. The ocean is warms (75 to almost 80) with residual wave action.
Here’s a video look: https://www.youtube.com/watch?v=vTJaTcF5dWc&feature=youtu.be

Too many fluke reports to note. Largest was a possible eight-pounder that was – ready for this – released! The hooker had a few eater fluke in the cooler and was willing to allow this genetically-gifted fish to swim off. That is the third case I heard of this folks helping the gene pool. I also had a FB report of two anglers reaching their limits by repeatedly passing over the same small area; not sure of that as late yesterday or this morning. There couldn’t have been any drift at all this a.m. on the ocean. I hate having to keep the motor running and bumping along to create a drift. Smelly fumes and noise.

Long cobia segment below. I guarantee some more were caught today.

Had to pass this along – in fairness. “We tried fresh stingray and it stunk. Even the cats wouldn’t eat it.”

THE COBIA SHOW: George Gilbert’s showy 72-pound cobia – photo on this page -- has folks emailing about this fairly understated species. 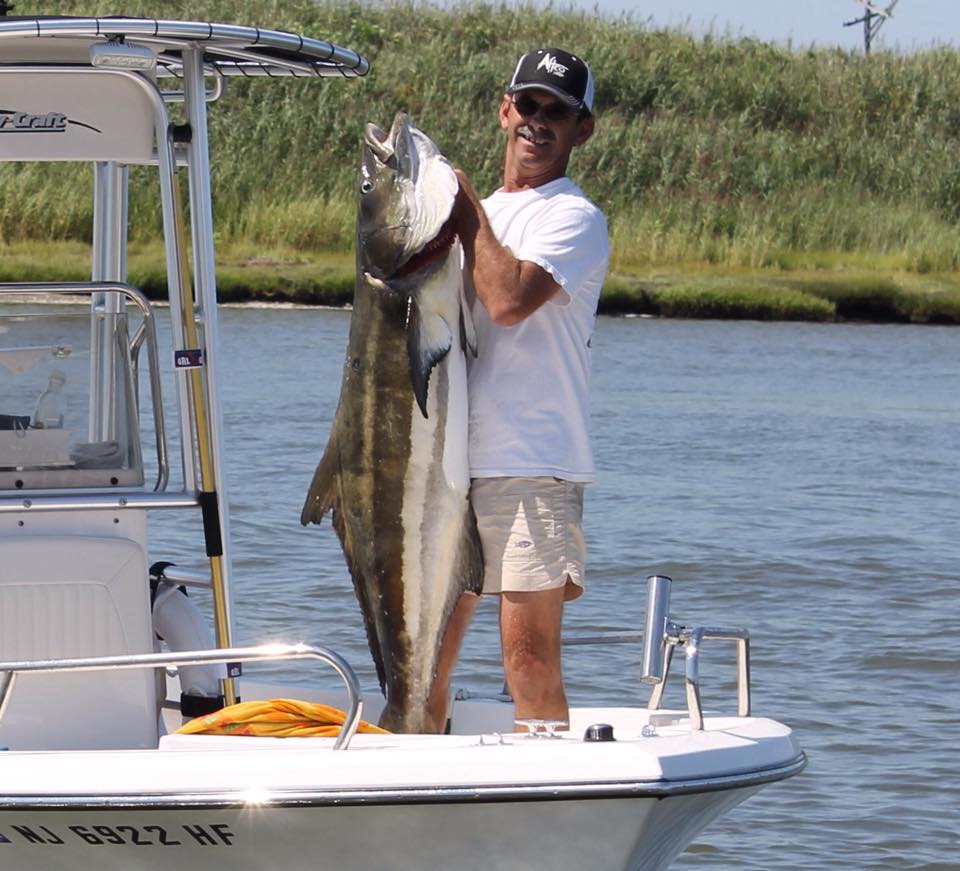 I likely would have shrugged off recent cobia catches as delicious novelties, except they’re now moving into our waters in unusually large schools. I base that on nonstop social media photos of cobia of everywhichasize – with that 72-pounder so-far leading the weigh-in way.  Also, I chatted with some down-southers and got glowing reports about all-time cobia schools/bites, from Chesapeake Bay up to Delaware Bay. Those down-south schools are mainly schoolie fish to maybe 15 pounds. However, cobia freely travel in schools of mixed sizes. It’s just tough to get through aggressive smaller ones to reach the larger ones, althrough larger ones often ball up below smaller schools. Cobia schools can contain over 100 fish. They love to gather below baitfish or under flotsam, very mahi-like. They have been known to “frenzy up” to chum, especially clam. Add just a few soft crabs to the chum and the scent is irresistible. However, it simply isn’t that easy to find the cobia schools – but if ever there was a summer to find them, this is it.  In NJ, they have been caught in Raritan Bay.

Below: They can also be speared. 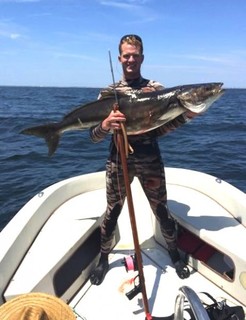 Cobia can be fished in every possible way, from jigging to trolling to chunking to (likely the best) livelining.

If chunking or livelining, a common rig is a simple fish-finder set-up, using 60- to 80-pound fluro, coupled with an 8/0 beak hook -- Owner or Gamikatsu brands jump to savage-sharpness mind. The trick is to explore up and down the water table. Obviously, if a school is hugging the boat, livelining comes down to a hook ties onto a long piece of leader, nothing else. 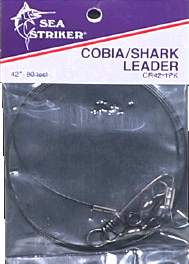 As to baits, a fellow I know who actually targets cobia – and very few folks do – exclusively uses live eels. However, he says the likes of live bluefish, kingfish, and tinker mackerel -- and, of course, bunker or herring -- work wonders. Live fluke is another can’t-miss cobia bait. Obviously, the state won’t be overly fond of any live-lined fluke below 18 inches. Ya think?

With folks now fishing fluke or reef/wreck fish further out at sea, cobia can suddenly come into view/play. In fact, some thought-to-be-shark runoffs are powerful cobia.

I just watched a slew of videos showing cobia traveling with stingrays and even next to whales. To be sure, cobia are now frequently being taken by folks targeting sharks, like spinners, blues, threshers and even makos. Cobia will gladly and voraciously go after larger chunk baits. They are chewers, which mean they’ll grind the hell out of even a large chunk bait. I’m told that chewing action is why circle hook don’t work well with cobia, -- though I thought that’s the very action you want to allow a circle hook to circle into flesh. Hey, I just read and learn.

The whale appeal for cobia: 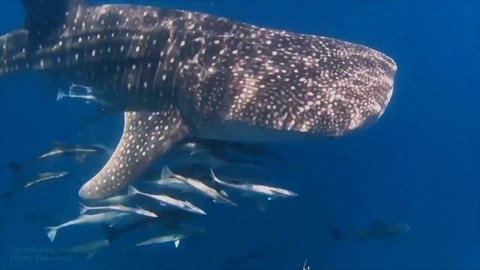 Offshore, cobia can be taken on slow to moderate trolls. They’re inclined to go after anything white, with straggling white plastics or baits seductively jiggling behind.

It’s going to interesting to see how close in any arriving cobia schools will show. Down south, they pass through inlets. I have this infantile notion of taking a cobia from the Rip in Holgate.

As to eating cobia: you can’t go wrong. I’ve been told their clean, white meat will barbecue into a deliciousness second to none. They freeze decently, provided they’re reduced to thinner slices or steaks, similar to tuna. Freeze them too thickly and they thaw very poorly, with an outside layer too mushy and an inside core taking forever to thaw.

Below: Cobia in tomato sauce; popular in the south. 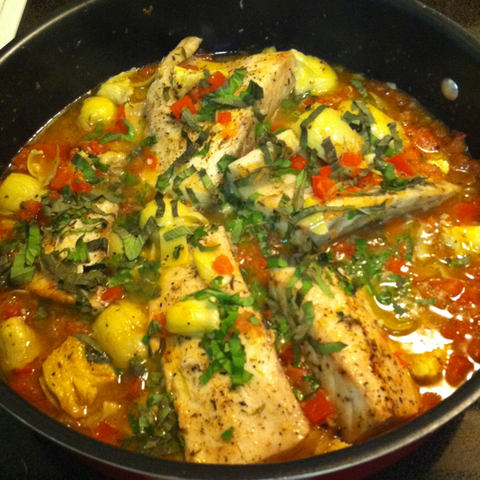 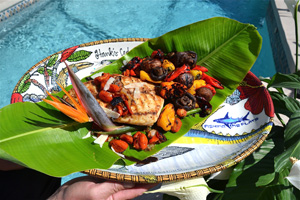 Toss all ingredients together on a baking pan. Roast sauce for 30-45 minutes, stirring as necessary to desired consistency. Sauce can be mashed or pured before serving

To Serve: Set grilled Cobia in a warm puddle of roasted sauce. Top with fresh basil and grated parmesan slivers.

Dug thru the shorts and skates and found one nice fluke at least.
Clint Pinkham

My boy caught this in the seine net in Toms River today. It's 6" or so. Never saw one of these. Any idea what it is?

It's hard to believe something so pretty is considered a "garbage fish."

Having a fantastic Berkeley Striper Club NJ tagging season, just had my 6th & 7th return for 2015. Little slot size tagged last summer made its way to Block Island recently and one of my 40"+ Bass from this season was re caught up in Mass not long ago.

Been ping ponging all over the place last few days. South shore fishing has been smaller porgies, cocktail bluefish, and some days good size fluke and weakfish. North shore has been solid porgy fishing with average size fish around 12" with bigger ones around 15". Dropped a striped bass on Sunday up there also. Have one opening Friday and Saturday.

Reports are up at http://www.nykayakfishingguideservices.com/fishing-report.h… 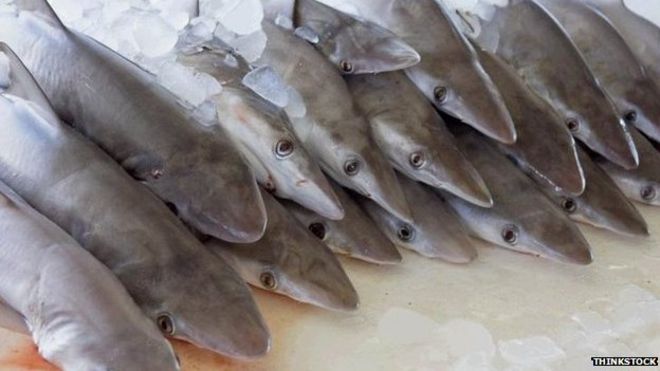 Humans should focus on the "interest", not the "capital" in the system - say the authors


Humans' status as a unique super-predator is laid bare in a new study published in Science magazine.

The analysis of global data details the ruthlessness of our hunting practices and the impacts we have on prey.

It shows how humans typically take out adult fish populations at 14 times the rate that marine animals do themselves.

And on land, we kill top carnivores, such as bears, wolves and lions, at nine times their own self-predation rate.

But perhaps the most striking observation, say authors Chris Darimont and colleagues, is the way human beings focus so heavily on taking down adult prey.

This is quite different from the rest of the animal kingdom, for which the juveniles of a species tend to be the most exploited.

Part of this is explained by the tools that human hunters exclusively can deploy.

We can tackle adult prey at minimal cost, and so gain maximum, short-term reward, explained Prof Darimont from the University of Victoria (UVic), Canada.

"Hunters 'capture' mammals with bullets, and fishes with hooks and nets. They assume minimal risk compared with non-human predators, especially terrestrial carnivores, which are often injured while living what amounts to a dangerous lifestyle."

This concentration on large adult prey is triggering extinctions, as well as driving an evolutionary shift towards smaller fish sizes and disrupting global food chains, say the authors.

Prof Tom Reimchen, a UVic co-author on the study, uses a financial analogy to explain the damaging consequences of hitting adult populations hardest.

He calls the adults the system's "reproductive capital" - the equivalent of the capital held in a bank account or a pension fund. And he says we are eating into this capital when we should really be living off the interest - the juveniles, which many species will produce in colossal numbers, expecting a good fraction to be doomed from the moment they are born via predation, starvation, disease, accidents and more.

The heavily biased preference for adults was not a sustainable strategy long-term, which ought to be clear from fundamental biology, argued Prof Darimont: "In the overwhelming number of cases as fishes age, they become more fecund. That is to say, they produce more eggs, have more babies, and, in fact, in many cases, many of those babies are more likely to survive and reproduce themselves.

"So when a predator targets that reproductive age class and especially the larger more fecund animals in those populations, we are dialling back the reproductive capacity of populations." 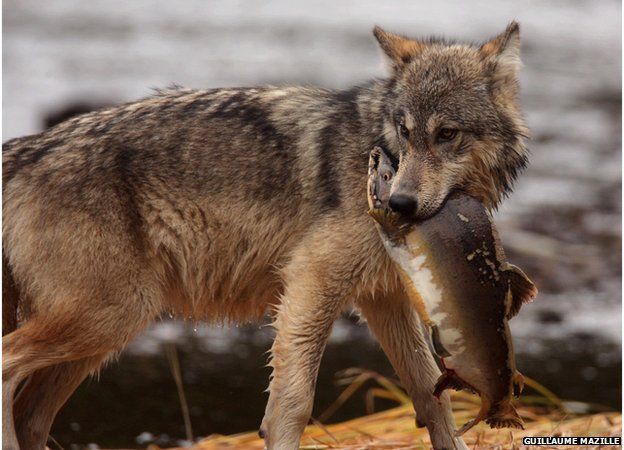 However, much of the standard conservation management today is based on the notion that it is the "tiddlers" that should be let go, to ensure robust numbers for the next generation. Trawl nets are often designed specifically to support this approach.

Doing it the other way would be challenging, but the technical solutions were available, said Prof Reimchen.

As for quotas, these should more closely align with the numbers taken out by natural predators, the team suggests.

He described the research as an interesting study that aimed to put some actual numbers on phenomena that many in the field would recognize.

But he cautioned that as broad as the investigation was, the data was still sparse, especially in the marine environment.

And as for refocusing the age class to take more juveniles, Dr Carbone argued that it would very much depend on the species in question. Not all species would react in the same way. But he said there was perhaps an even more fundamental problem, which was the density of human predators versus their prey.

"We exist at vastly higher densities than natural predators," he told BBC News.

"It might be that 100 zebras could support a lion, but in the case of humans we can outnumber our prey in many instances, and that throws the system. So even if we didn't have the efficient hunting technology, we'd still have problems with sustainability."

William Maier of Medford speared this 60 pound, 56" fish while free diving off Cape May on July 17.

There is more information here:
www.njfishandwildlife.com/news/2015/reccobia_sp15.htm