Monday, August 10, 2015: News of the day on LBI is the near death experience for a young man digging too deeply in the Surf City sand.

I was there as an amazing rescue resuscitation was performed. I was videotaping but quickly caught such static I backed off.

I then wanted to simply show the young man being taken off the beach, stabilized and ready for transport. I had no intention of showing anything more than the rescuers but, first, some lady out of the blue comes rushing right into my face. I had no idea who this ranter even was. As I began to shoot the walking off of the victim – absolutely nothing overly invasive -- the cops then (politely) asked me not to shoot because it “was a child.” I was told it was an older kid. Still, I backed off, mainly for that reason, though I afterwards noticed a lot of other cellphone folks shooting away. I’ll attribute things to the tension of the moment – and not an abiding desire to keep the media out of breaking news events.

I'm highly sensitive to my videotaping ... understanding the tension around many accident scenes. However, I can't count the number of times that PDs, FDs, those involved in the accidents, and (very often) lawyers later use/want my footage -- often to the benefit of victims.

As to today’s team effort, which I had hoped to show, here's read per EMT Jay Zimmerman: “Once again outstanding teamwork in Surf City today from the bystanders, lifeguards, EMS/Fire, Police, Paramedics and Flight Medics the little boy has a fighting chance. And once again, I love the people of this island!”

Below is a News 6 report. I politely steered away from the story and all the other newcast got it:

Authorities say a young boy digging a hole on a southern New Jersey beach was injured when the sand suddenly caved in on him.

The 12-year-old boy was on the 17th Street Beach in Surf City when the accident occurred Monday.
Surf City Councilman Peter Hartney says lifeguards and bystanders freed the boy and witnesses reported bystanders performed CPR.
He says the boy was breathing and in stable condition when he was flown to a hospital.
It's not known what caused the sand collapse. Hartney says Surf City requires holes be kept to one-foot deep.
The accident came just days after authorities in nearby Harvey Cedars posted a warning about the dangers of digging deep holes on the beach, noting that dozens of people have been killed or injured in sand collapses across the country.

The ocean remains big and rip-current dangerous. The guards are keeping people close in, though after they go off duty at 5 p.m., the 78-degree water will be coaxing afterhour folks to go in for a dip. I bring that up because many a rescue call has been made by anglers seeing bathers in over their heads. Yes, there have even been some jump-in rescues made by anglers, though I actually discourage that unless your rock-solid with your swimming skills.

I saw a couple Facebook photos of nice bass being caught bayside and near inlets. These are bigger fish though likely resident stripers drawn in by the churned up water.  I also saw a photo of a chopper blue, taken from a boat. It seems a number of captains are looking for any traditional offshore schools of big blues. I’m not talking way “offshore,” but a goodly distance out, where nighttime headboats used to go to clobber big blues under the light. I got another report of dead eelgrass beds, covered in slime algae, mainly near The Dike, north end. I hate hearing that because algae blooms will drive mobile marine life off the beds while suffocating sedentary species, like clams and the eelgrass itself. Maybe this purge from the northeast winds will help cleanse the beds.

The fishing in Beach Haven has been a mix of types of fish along with sizes including small fish, large fish, and some in between.

Captain Jimmy Zavacky has been keeping his boat the “Reel Determined” busy for the past week. He had a group out fishing in the Beach Haven Marlin and Tuna Club’s annual White Marlin Invitational Tournament last weekend. He had one nice white marlin hooked up Friday afternoon but could not get it to the boat. His main excitement came from a 400-pound manta ray with an 8-foot wingspan that was hooked and brought to the boat.

Captain Ray Lopez had local Bob Stewart and Noah and Gabriel, a father and son team, out for a fun filled day of fluke fishing. Cool ocean temperatures slowed the bite at first, but they found warmer water in the inlet. Ten year old Gabriel caught his first keeper fluke.

Captain Bob Gerkens of the “Hot Tuna” reports the bigeye tuna bite is still on. An evening trip to a southern canyon produced three bigeyes ranging from 155 to 200 pounds. The charter was arranged by Nick Garofolo for his sons Nick, Scott, and Trevor. Each got to fight and land their first bigeye under the tutelage of mate Dante Soriente.

Captain Gary Dugan of the “Irish Jig” reports his fluke bite over the past weekend was improving as he was seeing more fish on the ends of the lines. The big fish of the weekend was a 7-pounder caught by Gail Brandli who was fishing with the Beltram party. The only thing holding Captain Gary back at times has been slow drifts.

Captain Carl Sheppard of the “Starfish” and his party had a good time on Sunday when they found themselves in the midst of a school of spinner sharks which were jumping out of the water. The sharks ranged mostly from 3-5 feet in length with a couple a little larger. They had one hooked up and brought it to the side of the boat where they estimated it at 5.5 feet long.

No my room is not a mess. It's actually the very latest "It looks he put up quite a struggle" style. Above: Hopefully there will be some fish like this one, taken a few years back by Dante S.

Here is the first official word on the upcoming LBI Surf Fishing Classic. I’ll be further writing this up in weeks to come:

The Long Beach Island Surf Fishing Classic (The Classic) will celebrate its 61st season of island-wide surf tournament action on October 10, with the eight-week derby of striper and bluefish contest continuing through December 6.

Organizers this year have also recognized the ‘1@32’ pledge by man striper coast anglers for 2015, as tournament rules have been changed to allow only one striped bass weigh-in for any tournament day at a 32-inch minimum.  The minimum length for weighing in a bluefish from this surf only tournament is 30 inches, and only two bluefish may be entered by contestants on any tournament day. For 61 years, this eight-week surfcaster’s classic on the beaches of Long Beach Island has celebrated the fall run, helping support local businesses, while showcasing the camaraderie and spirit of the local surf community.  The grand prize winner in both the striped bass and bluefish division will receive a CTS surf rod and matching PENN reel, along with $1,000 in cash.  There are a total of eight, weekly $125 cash prizes for each species, along with $400 prizes for each of three tournament segments.  There are also various daily prizes, as well as juvenile awards (14 and under), ladies’ prizes, seniors’ prizes, along with special daily door prizes just for entering the tournament. A $100 cash award will also be given to the first legal red drum of the tournament.  Tournament proceeds go back towards the event prize distribution, with a portion going to a local high school scholarship.  The winner of the Battle of the Beach in 2015, Barnegat High School, will receive a $500 scholarship award this spring care of The Classic. Adult entry is just $30, while for kids 17 and under it’s just $15.  Registration also includes the commemorative tournament button, a 2015 LBI Surf Fishing Classic hat, decal and a free slice of Panzone’s Pizza (while supplies last).  A free “Super Surf Casting Seminar” will take place on Saturday, October 11th from 10 a.m. until 1 p.m. starting at the Ship Bottom Volunteer Fire Company at 21st Street and Central Avenue with Team Mullet. . 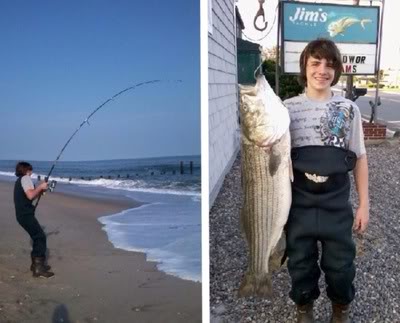 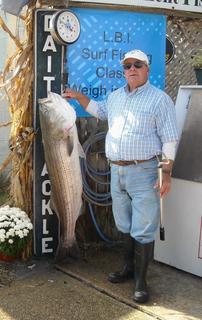 For more information, visit a participating tackle shop or go to www.lbift.com.

Back in town over the weekend and made the most of my 3 days on the water. There is an amazing amount of bait around, both big and small. We caught bass up to 42 pounds and some slammer blues as well. I'm back in a week and I have bonito on the brain... 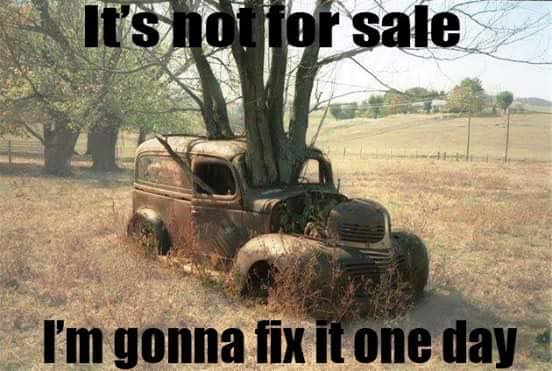 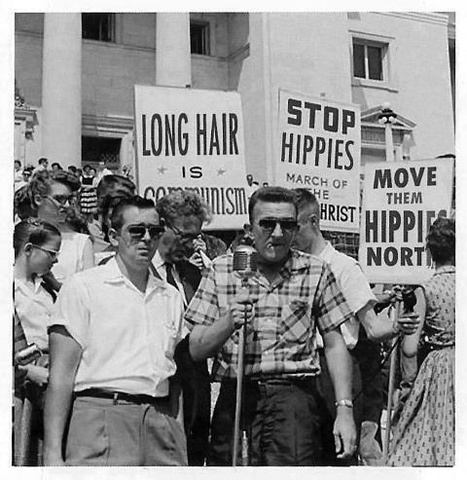 BURN THIS COLUMN: I need some radical folks to rally behind me to “Ban the Speed Limits on LBI!” I’m talking about
all the speed limits. Let’s burn ’em all. They’re bummers in the summer, dude.

So, have I aroused your hippy-radical attention? Right on, brother. Of course, you might wanna hear my rap all the way through.

As we rally against the man – and speed limits – I need to bring up the ungroovy subject of wigged-out bicyclists and mind-blowing pedestrians bumming our motoring trips. Face it, those trippers are downers – not to mention out of their frickin’ minds.

Then there’s the bummer-est numbnuts on our Dharma roadways: butthole drivers – other than us. We righteous drivers have to constantly trip out over spaced-out motorists riding high on summer adrenaline – and sometimes even more.

It’s such a head trip out there, we need to come together, right now, over me – and screw the speed limits! I’m already working on a protest chant. So far I have “Hell no we won’t …” Then, I sorta wig out.

So, fellow radicals, let’s start by rallying against the high-end 35 mph speeds on many portions of the Boulevard. Screw that speed … it just ain’t mellow enough!

Hey, I told you to hear me out before burning your bras, figuratively speaking.

You had me trippin’ in another direction, right? – as in cruisin’ around, speed limits to the wind, and doin’ our own outlaw thing? I did one of those direction changes like the middle part of the Monty Python “Lumberjack” song  … “I’m a lumberjack and I’m OK. I chop down trees, I wear high heels, Suspenders and a bra …”

So, my gig is up. Sorry if I bummed you out, but I’m actually goin’ all anti-speed. You know as well as me, brother, there’s no frickin’ way even a laid-back 25 mph speed limit is mellow enough when just passin’ through a clustered quagmire of summer humanity … unless you get your kicks by running down Alice B. Toklas and ending up in a legal purple haze.

Toke on this: Speed limits come with tiny unwritten words below those big black numbers – they read, sight unseen, “Conditions permitting.” Having hell on wheels all around, people- and traffic-wise, just ain’t permitting, karma-wise.

So let’s dig on that 30 mph sign, standing there chillin’, even when there’s enough crosstown traffic to blow anyone’s mind. It’s doubly trippin’ when there are harried happenings of people, cruisin’ to and from the beach/restaurants/stores, along with other stop-and-go drivers nosing around looking to score parking spaces, while strung-out packs of Spandexed road bicyclists buzz through every red light in town. It's way too fast, dude.

Dig it. We all know LBI’s freaky daily groove – and we need to cool it, regardless of what the man says on those signs. There are times when Island life just can’t handle speed. So, bro, drive to survive, even if it means going 1-5. Be an easy rider.

Peace out. Uh, I’m not sure what that “out” part means.