Monday, April 08, 2019: Fine fishing weather out there once you get past the south winds ... lots on catch and release

Monday, April 08, 2019: Fine fishing weather out there once you get past the south winds.

The bay is the best bass haven. In fact, a couple folks have first-time tried west street ends to decent avail, both day and night. Obviously, this doesn’t mean every black is bass worthy, but the south end is offering fish to 22 inches for hardcore types. Kayak or SUP casting/jigging is a prime go-get-‘em method. A mid-Island pier has a very bright night spotlight aimed at the water; that’s the ticket for this time of year.

"More progress this week with the hotly anticipated arrival of more striped bass. The spring fishing is really starting to strengthen both locally and the early season out of town spots.

"The back waters of Long Beach Island offer striped bass action both day and night. The day time is a primarily bait (clam or worm) thing; however at night the fish are hammering artificials. On the late night shift Thursday evening store staffer Kelly and shop ambassador Swag got on it. They were both into fish using Kettle Creek Paddletail Softbaits. Also in on the night action, Professor Fish Head (Dave W.). He had some late night striped bass bites too. While most of the bass roaming the bay are small there are some better ones in the mix. Keeper size fish were caught."

I'm looking at some pics of beachfront anglers -- scenic but striperless looks. How about letting me know if you've scored any suds bass. I won't even hint at the exact locale, though I will pass on take methods, especially exacting info on lures or jig specifics.

There continues to be very frantic near-beach bird showing now and again, mainly gannets. These amazing diving birds are far more common in fall so it remains interesting/mysterious as to what bountiful forage has them bombarding so close in when their summer haunts will be way far out at sea.

Below you'll see raw -- but highly informative info -- on catch and release in the striped bass realm. It includes the now much ballyhooed dnr.maryland.gov info info: "A study examining a striped bass catch-and-release fishery on the Roanoke River, North Carolina determined the mortality rate of released fish to be 6.4%. Because of high levels of fishing effort and high catch rates in this fishery, this relatively low mortality rate accounted for 46% of the allowable annual harvest for that river."

As I feared, things are getting testier and testier every time an angler keeps even a smaller sized bass. Keeping a trophy fish? Forgetaboutit.

I'll persist with the provable genetic science that stripers of any spawning size, or age, are highly proficient reproducers. Sure, larger female bass of a trophy ilk, contribute more eggs, numerically -- possibly twice that of a smaller spawner. However, the fertility of those trophy-bass eggs is being deeply questioned by researchers. Organ damage from long-term exposure to chemicals most severely impacts older fish.

I stand by my supposition that medium-sized bass (32- to 40-inchers) have a higher fecundity potential. They are the healthiest contributors to a successful spawn. A Maryland scientist I've talked with takes it a step further, believing those striped bass just coming of spawning age (under 25 inches) may offer the purist genetic input during a multi-fish spawn.

What does such pureness bring to the table? A higher chance at survival. In fact, a trophy fish's higher sperm and egg production might even be increasing the possibility of zygotes harboring toxin-damaged DNA. This is being intensely studied.

I'll repeat myself (from previous writings) that careful catches and releases of smaller stripers best assures the future of the entire biomass, numerically. For every trophy fish, there are likely hundreds, maybe thousands, of smaller spawners. You do the math -- while recognizing any spawning striper offers genes for trophy fish development. Reminder: Huge cow bass do not have any greater (or lesser) propensity to spawn other fish of their own ilk. It's a gene pool of the highest order during spawns. The genetics of long-term survival of the species dictates spawns bear bass of assorted sizes. What it comes down to is the overall healthfulness of spawns, which is why greater attention is being aimed at toxic or hormonal chemicals invading the spawn waters. baker's dozen to 28" tonight, some nicer fish in the mix. They wanted that Pinky!

First for the season 26" 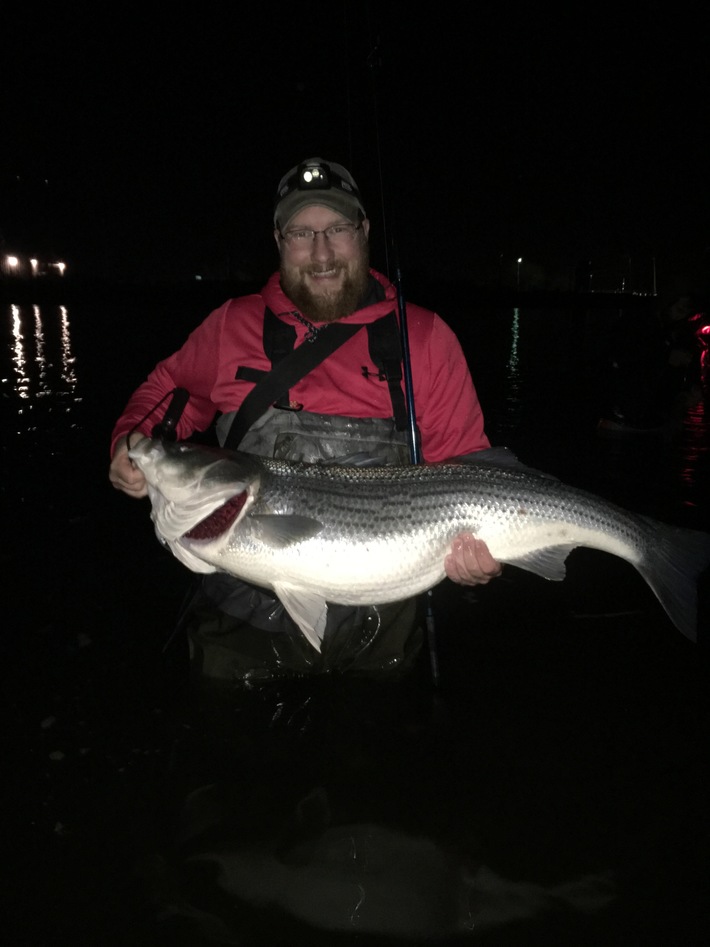 Bass catch and release fishing has been the subject of an incredible amount of hearsay and conjecture. Maybe it is because I live on the Chesapeake Bay, but I’ve never heard more misinformation about any fisheries issue. Early on in my conservation career, I was fortunate to meet and become friends with a fish biologist name Rudy Lukacovic. Rudy was a striped bass guru at Maryland DNR and is probably the world’s foremost expert on mortality associated with striped bass catch and release fishing.

Many years ago, I sat with Rudy and Shawn Kimbro in a small meeting room at the Matapeake facility on Maryland’s Eastern shore. Shawn and I were there to learn as much as we could about what happens to a striped bass after it is released. Rudy had worked on catch and release mortality from the Susquehanna to the mid-bay region. He came prepared with charts and graphs. It was an incredible learning experience and one that is worth sharing. So, here’s a bullet point list of how striped bass handle catch and release. Most importantly, these are things you can do as an angler to lessen your impact on the resource. I’d like point out, one more time, there’s a lot of bad information and old wives’ tales out there. Don’t believe them. Instead, this is what you need to know.

It is our responsibility to understand these factors and adjust our fishing accordingly. Right now, release mortality is set at 9% coastwide for striped bass. That is an average based on all conditions and methods. Now that you know the truth, you can make a huge difference with a few minor changes. It’s really simple. Don’t fish in fresh water when the water temperature exceeds 65 degrees. Don’t use trebles and J hooks while bait fishing if you are releasing fish. Be a good steward of the resource. Adjust your habits and do something great for the resource.

Jeff of Jersey Fluke Bellies on bloodworms this morning

And so it begins.... first time fishing since my operations! Here fishy fishy

Timothy Brindley is with Troop SixtyFive and Dustin Moch.

2 more keepers with a few other shorts. Beautiful day on the water. Osprey NJ, Atlantic City. Go get you some tog.

Olivia Rosane
Apr. 05, 2019 01:21PM ESTPOPULAR
Hurricane Florence, one of two hurricanes that devastated the U.S. during the 2018 season, lingers over the Carolinas. NOAA / GOES East satellite

Fallen trees from 2018's Hurricane Michael are still a hazard in the Florida Panhandle, but that won't stop the 2019 hurricane season from starting June 1.

As a sign of its approach, scientists have released their first forecasts for the 2019 season, which runs from the beginning of June to Nov. 30. Their predictions do offer some hope for beleaguered residents of the Caribbean, Gulf Coast and Eastern seaboard: The season is expected to be "slightly below average," the Colorado State University (CSU) Tropical Meteorology Project announ...

The CSU team is predicting 13 named storms, five of which will become hurricanes and two of which be category three to five storms with wind speeds of 111 miles per hour or greater.

"From the looks of it, it will be a quiet season," CSU researcher Jhordanne Jones told CNBC.

Last year, CSU's predictions were relatively accurate. The team predicted 14 named storms and seven hurricanes, one less than the final tally in each category, USA Today reported. An average season has 12 storms and six hurricanes.

"This year, we think that there will be a few less tropical storms and lower numbers in hurricanes, but again, the old saying is 'it only takes one'," AccuWeather Atlantic Hurricane Expert Dan Kottlowski said.

In 2018, it only took two. Hurricane Michael and Hurricane Florence together took 100 U.S. lives and caused almost $50 billion dollars worth of damage, according to USA Today. Hurricane Florence, which caused historic flooding in the Carolinas, was calculated to be 50 percent wetter due to climate change. Micheal intensified rapidly because of above-average water temperatures in the Gulf of Mexico to become the fourth strongest storm to ever make landfall in the U.S. Its intensification was consistent with predictions for the impact of global warming on tropical storms.

In 2019, lower ocean temperatures are one of the reasons CSU is predicting a slightly calmer season. The tropical Atlantic is cooler than average, which both reduces the chances hurricanes will intensify like Michael did and signals a more stable, drier atmosphere less likely to form thunderheads.

The second reason is that a weak El Niño has formed in the Pacific, and El Niño conditions are expected to persist through the season. The westerly winds encouraged by El Niño conditions in the Caribbean into the tropical Atlantic disperse hurricanes as they form.

AccuWeather also predicted the current El Niño would last through the peak of hurricane season.

CSU also predicted the chance that a hurricane would make landfall in a particular area. The probabilities were:

48 percent for the entire U.S. coastline (average for the last century is 52 percent)

28 percent for the U.S. East Coast including the Florida peninsula (average for the last century is 31 percent)

CSU will release additional forecasts June 4, July 2 and Aug. 6. The National Oceanic and Atmospheric Administration will release a forecast of its own in mid May.


Experts offer hurricane season prediction but say ‘it only takes one’ 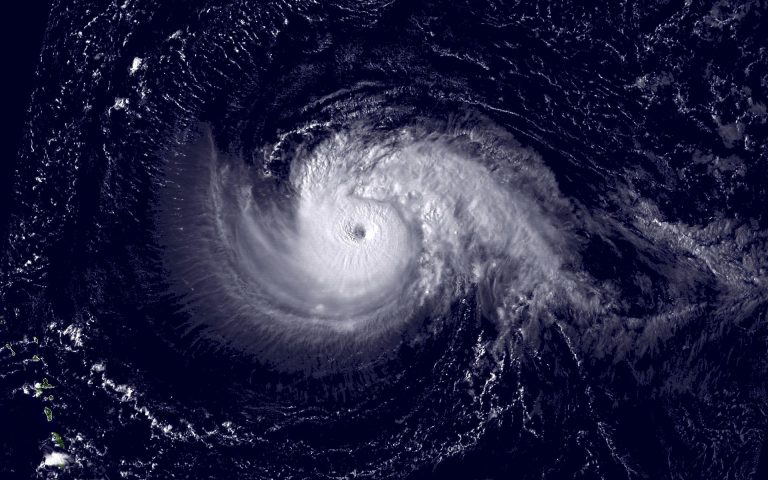 A NOAA satellite image of Hurricane Isabel taken on Sept. 10, 2003.


The 2019 Atlantic hurricane season will possibly feature “slightly below” average activity, according to a prediction by atmospheric scientists.

The reports calls for a 28 percent probability of at least one major hurricane striking the Eastern seaboard.

The forecasters cite a high likelihood of a weak El Niño weather pattern and sea surface temperatures in the tropical Atlantic at slightly below average as  inhibiting factors for hurricane development.

But the forecasters emphasize that their earliest prediction in April has only “modest long-term skill,” warning coastal residents that it only takes one hurricane striking the coast “to make it an active season for them.”

Some Atlantic basin seasons feature below average activity but still result in a devastating storm, like Hurricane Andrew in 1992, while others like 2010 — the third most active season on record — did not feature a hurricane making landfall.

The report cautions that while forecasting precision is impossible in April, the general public is curious about what’s possibly in store for them.

“We issue these forecasts to satisfy the curiosity of the general public and to bring attention to the hurricane problem. There is a general interest in knowing what the odds are for an active or inactive season,” the authors note.

NOAA offers a comprehensive guide on storm preparations. The agency’s “Hurricane Preparedness Week” runs from May 5 through May 11.