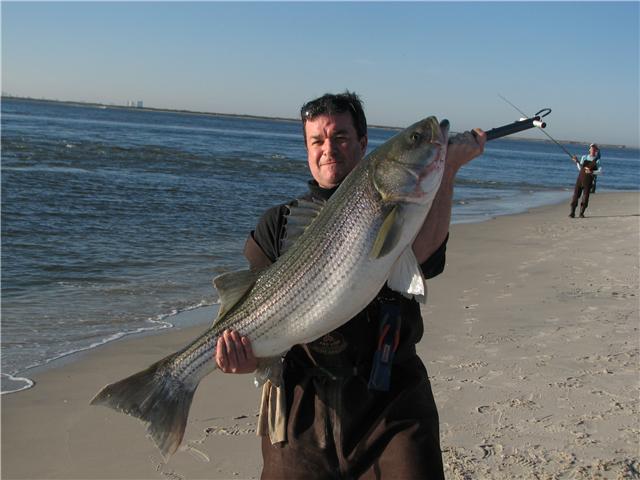 Monday, November 30, 2009: Well, the big story of the weekend was the remarkable bass bite mainly south end, though a couple nice bass came from north end beaches. It became one of the busiest weigh-in days of the entire Classic. By the by, the tourney would have been over already had it been 6 weeks. Here is a fun report from a non-tourney angler who pushed the 40-pound mark while donuting in Holgate, as everyone else was throwing out the snag hooks. “Hi Jay, Here are the photos. Chris and I caught two 37 inchers one was 16lb the other 15 lb. The big girl was 47 inches and was darn close to 40 lbs. had to borrow a scale and the guy who lent it to me told me it was old . What a day it was best ever for me, and the release was as exciting as the 20 minute battle. J.K.” I had that report complimented by a number of super stripering” reports. In all fairness, I also got this one. “I am not sure what reports you are getting but I was out on the Miss Barnegat Light today and there was no bass bite at all. There were 3 shorts between 36 people. The Doris Mae had about 60 people and only 3 shorts. That is 6 shorts between about 100 people. The captain was seeing tons of fish on the screen but they were not biting. Dave C. Mt. Laurel.” Many of relate to Dave’s frustration, especially when hearing not that far off there was semi-insane stripering taking place. Hey, some days you eat the bass and sometimes the bass irks you. The bluefish continue to make their 10-poundish presence known. The slammers are very spread out, though, like the bass, have taken a liking for the south end. I am finishing a write-up the tragic drowning of BH local (Big Al), who perished while trying to cross the bay in his homemade boat on Friday morning. I have gathered what information I can, realizing there are huge holes in the information since the sinking was not witnessed. I will write details in my weekly SandPaper column. I’ll then offer some blog thoughts exclusively for in here. Has anyone made a tog run?