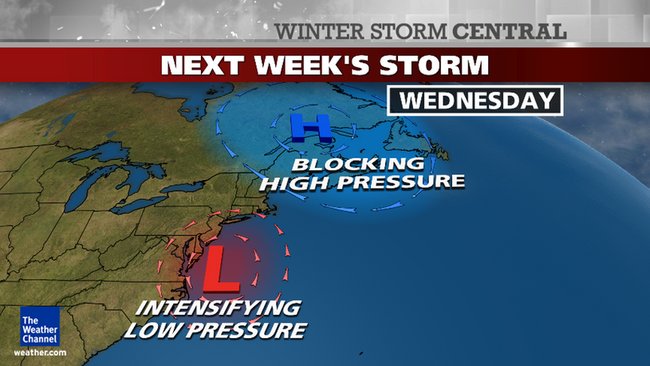 Yes, the winds are now technically out of the north and east but they had been forecasted to blow dead east, coming straight off the ocean --and instantly blowing mountains of  ocean water into our backyards. The Flood of ’92 had 12 hours of sustained 50 mph ESE winds, the very worst direction for forcing water into our bay. The worst flooding hit when the winds were almost calm.

With Storm Saturn now blowing from a far more northerly quadrant, we’ve greatly reduced the flood threat factor, though we'll surely get some decently dramatic street flooding just after dark, later today.  We could be on the moderate side. After that one nasty-ass tide, winds should go west for the following high tide, reducing the flooding. I still wouldn’t plan on any high-speed drives down the Boulevard throughout much of tomorrow morning.

The north angle to the winds will also usher in colder air. Had winds remained directly east, air temps could never go below the ambient ocean temp, the low 40s. Now, there is an enhanced chance of back-end snow -- after the storm moves offshore and the winds get a hint of westerly to them.

There’s no guessing accumulation amounts with back-end snows, especially along the coast -- though the shore holds onto the last bands of moisture later than any other area of the state. As to any accumulating snow, it’s doomed. Air temps by the weekend will be well into the 50s and could even inch into the 60s.

FOR TH’ERS: This angle blow -- and its beach-eating tilt -- is what I, as a metal detectorist, call a treasure storm. It eats away at the beach so acutely it can expose deep-down sand layers, holding lost coins and jewelry, sometimes from many decades past. However, the beach replenishment has introduced so much new sand that the days of finding old pieces of eight and ancient artifacts from shipwrecks are just about gone. Still, I’ll be out there, post-storm, trying to add to my stainless steel Hopkins lure collection. I forget my latest count but it’s well over 300 lures – each worth a couple/few bucks, I might add. Odd form of treasure but I’ll take it.

Bennies from this hard-honking storm: It’s like a final punctuation (of the winter season) that we have to take shoreline suring up seriously. Also, the beaches repair themselves fairly fast after a battering from north wind swells.

REPLEN CHATTER: Personally speaking, if Beach Haven and Holgate get on the replenishment bandwagon, that might be enough to carry the day – and the Island. I realize (and sympathize) that surf spots might be temporarily lost beneath pumped in sand but the Island’s famed erosional tendencies – and its refractive geography (NE to SW) -- will bring peeling waves back rather quickly.

By the by, having replenished sand erode back into the ocean is actually part and parcel to the hydrological theory behind replenishment. The sand is actually expected to move just off the beachline – modifying/enhancing something called the bottom profile. The sand holds there, at the ready, to naturally reinforce the beaches after storms. In some ways, it’s when the sand moves off into the drink that we get both the protection potential and the surf.