I got to talk to Joe Joe Czapkowski today. Real nice guy and understandably thrilled with his catch – not only because of its length and girth but also the fact he caught it in utterly sloppy surf conditions, i.e. both the best conditions to fish for trophy bass and also the worst to haul one through the pounding surf and onto the beach.

For the record, Joe was a-beach in 20 mph ESE winds and contending with grinding surf, pushing six to eight feet.

The winds and currents – south to north – were so bad Joe had abandoned his usual two-rod surf-fishing modus. He opted for handholding a single, inherited (from father-in-law), 50-year-old, 12-foot rod. It was coupled with a Penn spinning reel holding fresh, Berkley, 20-pound-test mono line.

And, as was widely announced, he really was using clam gobs when he hooked his one and only fish of the day.  Of course, if you have to hook up with just one fish per day, a 48-pounder is atop that exclusive category.

But there is a bit of a story behind that clam choice.

Joe had actually begun the wind-blown fishing session chucking bunker chunks. It soon became clear that the meat wasn’t holding up very well in the surf and suds. Mighta been a mushy batch. As an only option, he turned to a few extra-large surf clams, purchased from Bobbie’s Boat Rentals, BL.

The size of the clams played a bit part in the hook-up saga. Joe opened one and decided it warranted being halved. His friends would later kid him about being so cheap he was conserving bait. Not so, said Joe.  An understated clam gob was actually more suited to staying on the hook in washing machine conditions.

As for his switch to clam bait that day, it wasn’t simply the hooking convenience. Joe knew full-well that roughed up waters often have bass eating from the clam hatch.

Where things got hmmmm-ish was the way Joe drifted from traditional clam-chucking thinking, i.e. change clam gobs frequently -- if not sooner. He kept using and reusing that one halved piece for three casts and retrieves. Hey, it kept staying on the hook. By Joe’s own admission, the bait had likely given up the scent for that third charmed cast.

After its third stint in the surf, the firm-holding clam was sucked in by a bass over twice the size of the largest striper Joe had caught since pursuing surfcasting a decade or so back. Not that he’s new to angling, having boat fished with his dad since he was a kid.

As for the hookup, it was a solid, no-denying hit, especially with Joe hand-holding the rod. After an initial “hard hit,” the bass performed a short seaward run, before rising up. It made a quick showing on the surface but not nearly enough to offer Joe a read on its true size. “I knew it was bigger but that’s about all,” he said.

After diving back down, the cow striper then undertook one of those traditional parallel runs along the beach, in this case northward.

Joe countered by “walking” with the fish, to minimize the bow in the line. That mirroring went on for nearly 50 yards.

As Joe finally began gaining line on the quarry, he had bouts of sudden line slackness. That’s always a sinking feeling. In retrospect, Joe couldn’t tell if the slackness was due to surging waves literally shoving the fish forward or if the bass was throwing in some escape runs toward the beach, another very common escape move used by bigger bass.

I'll note right here that, per Joe, there was actually no chance the fish was going to spit the hook. It was deeply embedded, nearly unremovably, in that ridiculously tough skin on the side of a striper’s mouth. “All that could have happened was the line breaking,” he told me.

Still, there was no way of knowing that as the 10-minute fight moved into its last and spookiest phase – the trial of the pounding shorebreak. And the waves would prove a challenge, mainly during the final grab portion of the landing.

"When it was in close enough, I went after it. Reached for it -- and missed,” said Joe, adding, “Then the undertow took it out.”

While such a grab and a miss has often proven to be end times for a fish fight – fish 1, angler 0 -- things got even worse for Joe as a large wave then crashed directly atop the fish. But, instead of rolling the fish into deeper water, the powerful wave drove the fish right past Joe and rolled it higher up on the beach.

Essentially backtracking, Joe zeroed in on the sudsed-over fish and executed a solid striper grab.

It wasn't until he had hauled the fish up to surer sand that he finally got a gander at how large it was.

It was now time for a obligatory public display of the Classic catch but the windblown beach was bare of other anglers. There was, however, a couple non-angling folks (the Van Ordens) heading onto the beach. And they knew a remarkable catch when they saw one. They quickly shot some photos and essentially served as witnesses to the catch, leaving a business card with Joe.

Wanting even more catch confirmation, Joe called his wife, who was out biking at the time. She rushed to the striper scene to snap off a load of shots, seen in this blog.

For Joe, he'll now wait to see how well his 48-pound cow holds up. It’s sure to be a segment winner – and possibly more. However, Joe will be spending the greater part of the Classic’s remaining six weeks at his East Brunswick home. And he fully understands that his top-rung fish will be the target of all other surf fishing Classicists. 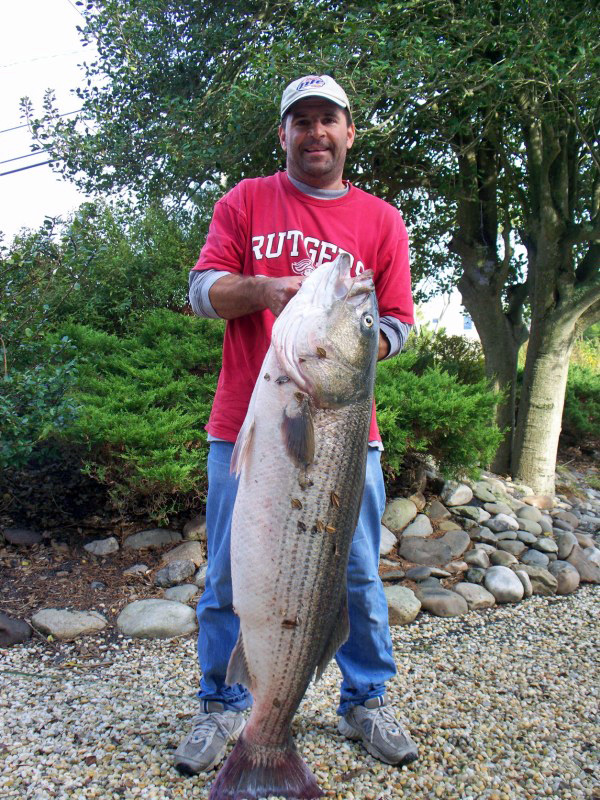