I got word from folks in the borough of Barnegat Light that the wildlife snares are gone.

Sunday, March 27, 2016: I got word from folks in the borough of Barnegat Light that the wildlife snares are gone. I’m not sure that includes any-and-all snares within the state park.

A goodly number of folks quickly got involved with this issue, including BL’s town leaders.

It appears the snares were placed by a contracted trapping company, which does the coastline, down to Cape May. That sorta means neither the US Fish and Wildlife Service (a tag with their name was seen on one of the snares) nor the NJ DEP’s Division of Fish and Wildlife are directly involved with placing the snares.

It then comes down to who is paying the trapping service. By the by, I refuse to run with the more euphemistic trapper title of Wildlife Removal & Animal Control.

I have been alerted that the Holgate Refuge has snares in place, though I’m not sure if the same contractor is being used there. The Forsythe Refuge has a long history of trying to eliminate predators from engendered and threatened nesting birds.

Below: This mainland Forsythe red fox is in a proper refuge place, thus it gets to live. It adds a life-and-death feel to the expression, "Location, location, location." 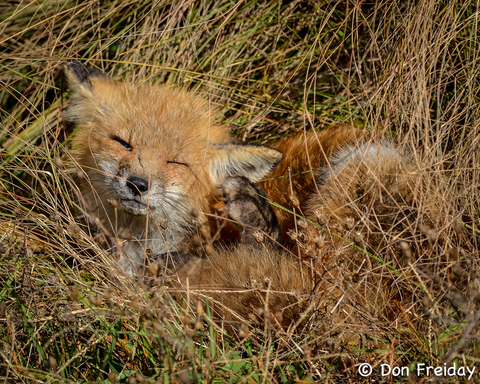 A NO-KILL STATE OF MIND: There are often instances when predators must be controlled. That does not mean killed. 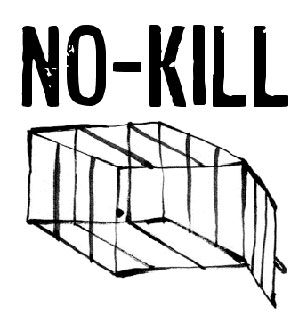 I’m an unwavering “humane” type. We, as a master species, are surely bright enough to come up with ways to compassionately relocate predators. I’ll more pragmatically note that we humans are the uncontested number-one reason many wildlife species have been extirpated – with more going extinct daily.

Per out Popstar Pope, it is our solemn duty to find creative ways to assure that all existing wildlife stays existing. 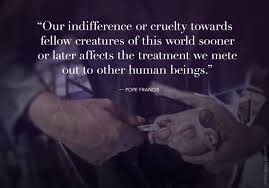 As I was looking into trapping in NJ, I couldn’t help but notice there is a “New Jersey Wildlife Removal & Animal Control Directory.” That kinda tells me way too many folks are looking for an easy way to neutralize evenly remotely annoying lifeforms. That’s sick if you think about it. I hate to pick on my own insurance company but notice the indifference in the Geico commercial when “Mom” says, “Well, the squirrels are back in the attic. Your dad won't call an exterminator." Exterminator? 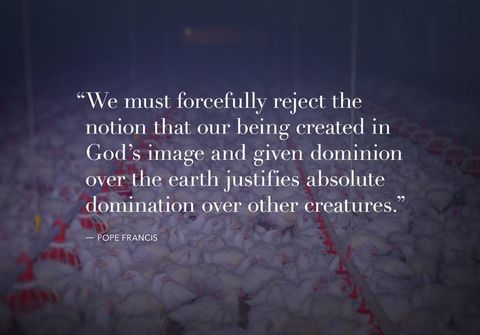 I’m willing to work with the bird folks when it comes to controlling predatory wildlife, along with controlling animals of a highly-domesticated ilk, pussyfooting around the BL dunes. There has got to be a kill-free way to lessen the risk factors from nuisance wildlife. That begins with finding out what an enemy looks like – and, in nearby cases, leaving behind the lazy-assed assumption, “It must be those foxes.” Of course, foxes also just happen to have the most valuable pelts. Hmmm.

WHATISIT?: While duning about, I see tracks from foxes, possum, raccoons, otters, rodents, bird of all feathers and tons of family pets, led by cats.

Below: Possum in the sand. 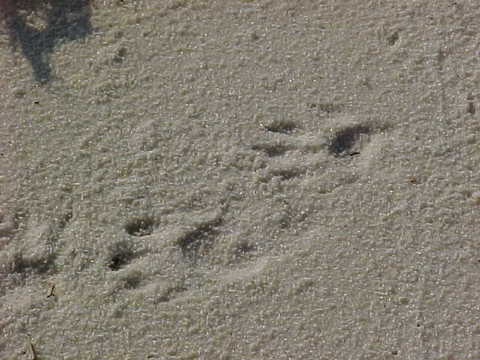 But tracks barely break the surface when trying to get a true read on what might be menacing nesting birds. A true threat should be seen. Enter trail cams. These are motion-activated cameras that snatch the image of a critter in a walk-by instant. What’s more, if placed properly, a trail cam can tell if a creature is on the sly for nesting birds -- or simply doing their daily scrounge-about.

Naturally, I wouldn’t be surprised to see foxes dominating the dune mix, though only barely nosing out feral and domesticated cats. Foxes and cats cover a ton of territory, nightly. Face it, it is essential to be absolutely certain of a threat before going gonzo on its removal. Who knows what’s lurking out there?

To prove my need-to-see point, just yesterday I got word that there are coyote tracks being seen in BL. Now, I’m decent at identifying animal IDs but picking out coyote tracks from amid a slew of domestic dog tracks ... in the sand? Come on now. Again the surest way to tell what is leaving tracks in the sand is to get a nice trail-cam photo?

Getting a lot grittier, I just can’t buy a predator-control theory of “kill ‘em all … let the plovers sort ‘em out,” whereby plover success is predicated on removing all other forms of adjacent wildlife and seeing how many surviving chicks salute.

Once a culprit is ID’ed, humane traps will work magic, especially for foxes, which have lost their wild edge. Town foxes will climb into any trap baited with the delicious cat food they’ve found on back-stoop bowls all around the borough.

BIG PLANS FOR SMALL NESTING AREA: I have a theory regarding the current state park bird-protection areas, adjacent to the heavily human-use South Jetty. And I’m sure those bird zones are at the heart of this trapping spree.

The BLSP nesting area is way too small. Vegetation has steadily been encroaching on that sandy nesting environment. Going fast are the types of open sand stretches sought by discriminating plover, along with many other ground-nesting shore birds. More deleteriously, the closing-in walls of vegetation afford perfect cover for any predators, even those primarily wanting to scavenge the jetty area – but not immune from grabbing bird eggs along the way. 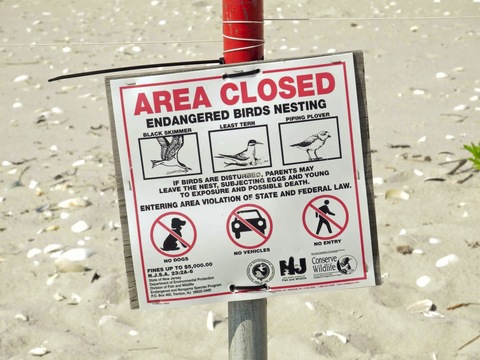 Epiphany: Why not greatly enlarge the nesting zone by clearing a large (football-field width) opening south of the current zone. Call it Nestland. It would invite in more piping plover than you can shake a stick at, metaphorically-speaking, of course.

Not long ago, the area south of the South jetty had been wide open. Virtually all serious Barnegat Lighters can recall when that heavily now-overgrown area was nothing but a sand expanse.  It even had a bit of wetlands, including a vernal freshwater pond. Somewhere, I have photos of thousands of baby Fowler toads that hatched there on year. Anyone recall that weird irruption?

Once cleared, Nestland could thereafter be kept open for nesting birds. Now, that’s how you get plover to recover: ya give ‘em better digs. Plover be readin’ this goin’ “Rock on, dude.” Hey, we have cool plovers hereabouts.

KEEPING AN EAGLE EYE OPEN: Monitoring Nestland is where our human ingenuity flares up, by my thinking.

There are now Wi-Fi-based trail cams that can be viewed in real-time -- as in “Live … From the dunes of Barnegat Light!” With infrared cameras, a night-stalking predator could be seen the instant it sets as much as a forepaw in the forbidden zone. 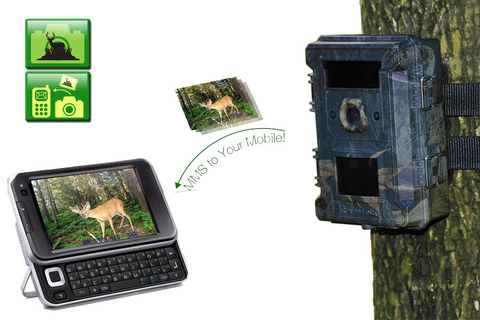 Here’s where I get gadgety. We use strategically placed sirens to scare the hair clean off the predators? Hey, at least hear me out. Be it through motion-activation, or a red-button pressed by a night watchman at the park, the sirens will blare on, loud and hard, when a trespassing predator steps in. The effect would be similar to an electronic dog collar. A couple sound jolts would be enough to send any predator packing.

Sure, I can already hear chambers of commerce moaning, “We can’t have sirens going off … even in a state park. Do you know how much people pay for LBI rentals?”

No, I don’t know, thank my lucky local stars. But perish the screaming siren thought … and enter my “Mannly Predator Siren.” I’m sorta serious here, conceptually. My siren, blasted through outdoor speakers, would issue forth in humanly-undetectable frequencies. Hell, a slew of frequencies most-hated by an assortment of species could be played. I’ve seen what freak-out frequencies can do to wildlife, namely raccoon in Florida. Mock if you must, but in just this short concept delivery, I’ve at least tried to initiate a more civilized way of dealing with anti-plover predators -- while thinking outside the bird cage when it comes to devising possible micro-methods for bringing an endangered species back home. 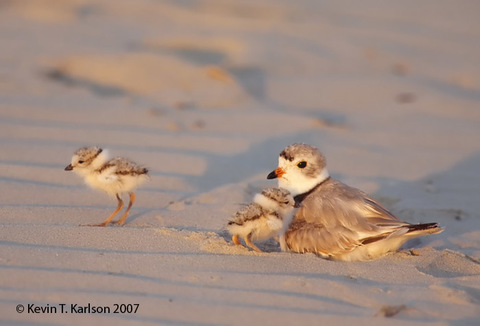