Thursday, November 17, 2016: Back to west winds ... and shiny skies. The bass-less surfcasting beat goes on -- made worse by the above alerts. 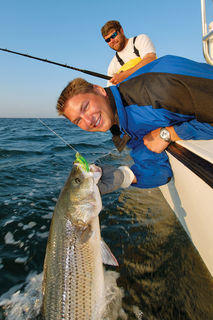 Back from a week's vacation with the wife, the phone rings this morning around 8 a.m. while I'm on hour two of catching up - it's my dad. "Jimmy, you shoulda been here with me, the bluefish and bass are blowing the bunker clear out of the water, I just dropped a huge striper that ran under the boat and across the rocks...HOLY COW, another humpback just breached off the stern, it's amazing. Look, I gotta go, I have another one on, good to talk to you son....(click)"

Jay, just got back from fishing. Unlike yesterday where there was no bunker north of the inlet unless you went to Seaside. today it's nonstop bunker from the inlet all the way up. Caught no bass and saw no bass taken today only monster Blues in the 15 pound class. 100 boats spread out along the beach. Bunker were screaming south, so maybe this will bring LBI alive.There were bunker inside from the lighthouse to the CG station, all the way across to the dike.  WP

Thursday, November 17, 2016: Back to west winds ... and shiny skies. The bass-less surfcasting beat goes on -- made worse by the above alerts.

That’s a nega-start even for me … most often a die-hard optimist. OK, I’ll instead say: maybe this is the day it begins. Or not.

The ocean is down but with enough stir to make it fine for surf fishing, both bait or plugs.

Boat fishing has run hot and cold. I bring that up since I guess I have been making it sound like boat bassing is a slam dunk. Not so. That said, the farther north you go, the better your chances (alert?????)

This week alone I’ve had nine meetings … each one fairly time consuming. I really enjoy working with the community – and I beg folks to do so in your own neighborhoods. Admittedly, daytime meetings are barely bearable since I look over and see the outdoors tapping at the windows begging me to come out and play. Sometimes it makes weird faces that crack me up. I told you I’m doing too many meetings.

Above, I purposely chose the word “bearable” since this is the time of year I’ve had both my Ocean County black bear sightings; both near 539, Lacey. Different bears, though. No sighting – nor tracks -- in the last three years. Typical, now that I’m fully camera-ed up. Those sighting were during my obsessive mountain biking days. I had to put the brakes on my often 30-mile trail peddles when it got to my prostrate a bit. I gotta get back into biking. Short of ninja hiking, nothing gets me closer to nature, before it knows I’m there, than quiet peddling.

Back on LBI, I got this write-in report from Tom Rizzo: “Well Jay, I hoped that you had caught one today, because I wanted to share mine with you. After working a plug that had been talking to me, on one side of a bar, on top of it, then to the other side, without a hit or seeing anything in the air or in the water, I started back. Still on the downtide side of the bar, right at the change of the tide, I got thumped. Did the pull back thing, and felt nothing. Surely that was a strike! At least that's what I remember a strike felt like? Cast the same water half a dozen casts, but nothing. Worked a bit north, and thought about casting between two sets of breakers to swim the plug with the tide. Bang! I got thumped again, and this time hooked up. In the dark water of late sunset, after some fighting the fish, and not being able to see it, I was sure it was a Bass. Finally, after a few in and outs trying to beach the fish in the end of the waves, I saw the fish, and yes, it was a Striper. Somehow, the one hook on the rear treble did not pull free from the bit of skin it was in, and the fish lay at my feet. I still feel pangs of regret about killing it, but I had a goal. My Father and Sister are joining me for a Delaware Bay country trip this Friday, and I have been hoping to surprise them with a Striped Bass dinner. It was definitely a local fish, nice and fat from filling itself with crabs. Now, I wait for you to tell me that you got one for the table.”

Despite my run of bad luck, I have no doubt I’ll get my Thanksgiving striper right before the holiday meal.

I had one off-putting mention by an emailer who nonchalantly mentioned be has been keeping “two keeper bass” (from boat) lately. I just want to alert folks that we’re allowed one bass @ 28″ to < 43″ and another one ≥ 43″. Simply put: LBI surfcasters are only allowed one keeper schoolie – per day. You’re welcome to look into rules for IBSP and the Bonus Bass Program" http://www.state.nj.us/dep/fgw/bonusbas.htm

I think the  ≥ 43″ second fish recklessly encourages the keeping of low-edibility cow bass.

Could You Be Intercepted While Fishing?

The Access Point Angler Intercept Survey (APAIS) is under way. You may see our interviewers at many marine public access fishing sites throughout New Jersey.

This recreational angler survey is now conducted “in house” by each of the 13 Atlantic states from Maine to Georgia. New Jersey Division of Fish and Wildlife is conducting this survey on behalf of the National Oceanic and Atmospheric Administration (NOAA), National Marine Fisheries Service.

For each predetermined public fishing access site (jetty, beach, marina, pier, boat ramp, causeway, etc.) a random computer selection assigns the date and time during which the APAIS interviewer must stay—whether or not there is fishing activity—to survey all anglers, including those with “no catch,” even in bad weather. The interviewer’s job is to politely engage with anglers, asking questions that will provide data on the health of our recreational fisheries.

These questions include, among others: how long was the angler actively fishing? What was the target fish? What species were actually being caught and how many? Do you have fish that we could sample (measure, weigh and identify)? The interviews provide valuable information that will allow estimates of overall catch. The more data collected, the more successful the survey becomes.

It is noteworthy that reporting a zero catch for the day is equally important to the survey results as when you’ve reached the possession limit. A “no catch” response is also calculated into the estimate of catch-per-unit-effort amongst all the anglers fishing in that area, providing realistic data.

Please know that the interviewers have no enforcement responsibility and are not looking for violations or to hassle anglers in any way. Interviewers—whose shirts will be emblazoned with APAIS—are collecting valuable fishing catch-and-effort data. Your willing participation is vital to assemble a large database which will be utilized to help manage the health and future stocks of recreationally fished species.

How are the Data Used?

Accurate, up-to-date angler catch, effort and participation statistics are fundamental for assessing the influence of fishing on any stock of fish. The fish quantities taken, fishing effort plus the seasonal and geographical distribution of the catch and effort are required for the development of rational management policies and plans. Continuous monitoring of catch, effort and participation is needed to assess trends, to evaluate the impacts of management regulations and to project what effects various management scenarios could have on a fishery.

New Jersey Division of Fish and Wildlife’s Marine Fisheries Administration conducts a plethora of other surveys to add to these data. (See The Fishing Experience: It’s Not Just About Fish) Scientists, stakeholders, public officials and many others all have a hand in developing recreational fishing regulations that benefit the marine resource and those who enjoy them. If you’re an angler, the process ultimately revolves around you.

What we learn from anglers is critical to understanding the health of our fisheries. If you are not “intercepted” for an interview or contacted through the New Jersey Saltwater Recreational Registry Program, you can still participate. Become part of the fishery management process: submit a fishing report after each saltwater trip to the New Jersey Volunteer Angler Survey. Your fishing reports—whether you caught zero or 50 fish—will help improve saltwater fishing opportunities in this state. Your reports will have a real impact on how our oceans are managed. Submit online reports at www.NJFishandWildlife.com/marinesurvey.htm.