Friday, September 23, 2016: The NE winds just won’t quit ... neither will those license plate scanners LBI cops are using on you

Those be some nimble hands ... damn.

Got some briskish winds tomorrow ... Friday, September 23, 2016: The NE winds just won’t quit. I know I said we shouldn’t mind them since they’re part and parcel to fall fishing but we’re not far enough into the season to have the cow stripers hereabout, i.e. the bass best stirred into the beachline mix via NE winds and swells. Unfortunately, we’ll be seeing gusts to over 20 mph.

Maybe I can blame the LBI Fishing Club’s “World Series of Surf Fishing.” I swear that every single year the winds go bonkers out of the NE when they hold that long-lived event. Yes, things like that can impact the weather. Just schedule something like your kid’s $25,000 wedding and see what happens, sky-wise.

I don’t know if the winds will be hard enough to impact the fireworks in Harvey Cedars tomorrow. They were already canceled once by the threat of stormage.

The snapper bite continues unabated. The World Series contest tomorrow will likely be weighing in a load of them, though big surf makes it tough to mess with such small fish – and these blues are sub-one-pounders.

A New England fellow who stops in here now and again said his area has never seen “albies” like this year, even in sounds and bays. So Summer is over and what a great one it was and even though it sure did still feel like summer today on the beach it's time to officially start the 2016 Fall Run. And the first day of Autumn means it's time for False~Albacore and screaming drags , today didn't disappoint as I landed a really good one ( non blitz fish ) mid day. Now is the time to look for these amazing speedsters that will test your tackle and change your life so too speak LOL"

DEADLY SWASH: While borderline weather means there’s way less chance of folks jumping in the ocean this weekend, I’ll advise once again that it is highly hazardous out there, due to mixed swells, pushing five feet along, combined with the ongoing problems presented by replenished beaches and the rapid drop-offs, especially at high tide. Oh, that lack of full lifeguard regimens is the biggest spook factor of all.

Are you seeing a lot of flashing red lights on LBI? Well, they’re most often after violators … which they’re already certain about. LBI’s finest now use Automatic License Plate Recognition (ALPR) Scanning Systems. In the time it takes your license plate to blink, scanning devices mounted on police cruisers have absorbed intrinsic data from the tags, computerized it and cross-referenced it with anything that license plate might be doing wrong. OK, so maybe I’ve added a needless degree of separation between what the actual license plates have done wrong and what little ole you, as the driver behind the plates, has done wrong.

YOUR PLATES MIGHT BE CRIMINALS: Below is some essential reading about these scanners, including the most common question, are they Constitutional?

Apparently yes. Back when, someone like Thomas Jefferson or Warren Harding pondered infrared, digitally-enhanced, optical character recognition scanning devices, complimented by a national network of multi-terabyte computers – and they said “Sure, why the f*** not.”

Anyway, while pullin’-ya-over cops might still ask for license, registration and proof of insurance, those buggers know already. They’re just trying to make you squirm. Hey, we all have our fun things to do at work.

I'd like you to read this -- if you don't already know about ALPR systems ...

Automatic License Plate Recognition (ALPR) scanning  systems are one of the newest technologies in the hands of law enforcement. The system consists of several cameras mounted on a police cruiser, hooked up to a computer inside the vehicle. The number and letter images on license plates are scanned and matched with an on-board, real-time database. This database can be set with flags for vehicles that have been identified or tagged for any reason, including:

Any time one of these alerts is triggered, the officer in the vehicle is immediately alerted to your presence, and for what reason your car has been flagged.

The system can also be matched with the owner of the vehicle via a DMV database. So if you are the owner of a car and have a

you can find yourself stopped by the police in a heartbeat, just for driving down the street, and not committing any traffic violation.

How Many License Tags Can They Scan?

A license plate scanner can capture thousands of tags per hour. A police car parked on the side of the highway can scan virtually every car license plate in sight. They can successfully identify a vehicle going in the other direction down the highway at 70mph.

Every time an image is captured, it is saved with the time, date, and location by GPS coordinates. So the police now have a record of where your vehicle was spotted at the time of the scan.

Can The System Make Mistakes?

Definitely, no system is flawless. Sometimes the optical character recognition will guess wrong. If it can’t decide which letter is on a plate, it will search the database for hits on both options. So it is entirely possible to be pulled over mistakenly based on a hit from the license plate scanner.

As more systems go online, deployed in every local, state, and federal law enforcement vehicle, and even at stationary points, like entrance points to a city, what does this mean?

Where does all the data get collected, and shared, and for what purpose?  It’s already been established that police can data-mine historical data, and pull up all the touch points of a license plate across multiple systems.

With all of this data, the government will be capable of massive retroactive searches with no warrant or probable cause.

You can imagine how they can cross-reference this information.

The police or feds don’t have to violate your rights deliberately, or even know what they are doing with it at the time. The data is being collected, and can be used for any purpose in the future. It can be used to gather evidence for future investigations of crimes that haven’t happened yet.

The possibilities to use this location placement data to create circumstantial evidence against you will quickly become overwhelming.

Are License Plate Scanners a Violation of My Civil Rights?

No, not according to the law. You have no expectation of privacy while out in public. Courts have regularly held that police officers are allowed to randomly type license tags into their computer as they pass by.  These systems are just a version of that on steroids.

The Bottom Line on The License Plate Scanner Explosion

Additional local police departments are setting up these systems every day, often paid for by federal grants or homeland security. It won’t be long before nearly every police vehicle has a license plate scanner onboard. The web of interconnected systems will mean you won’t be able to drive down the road without being scanned, tracked and logged, multiple times.

And all that data will sit… somewhere. It will be simple for your travel patterns to be instantly pulled up, analyzed, compared, and matched with any patterns that someone may deem “suspicious”, for any reason.

No doubt this will be a significant improvement to public safety in many cases. But someone should be asking what we are giving up in the process, and what if any restrictions exist on the use of this data to check up on ordinary citizens.

Update: Are state laws and privacy advocates pushing back?

The good news is that a pushback is happening, in the courts and the state legislatures.

Recently, the Federal Eight Circuit court of Appeals found that private license plate data collection companies do not have unlimited First Amendment rights to photograph everything and scan and save the data. States like Arkansas in this case (and Utah previously) have tried to pass restrictions on data collection. The Arkansas law stands, and only allows data collection from government entities. The Plaintiff in the case, Digital Recognition Network Inc (Vigilant Solutions) was hoping to get its own data collected by private towing companies or other venues, in order to sell the data to other private entities – repo firms, car insurance investigators, or anyone else who would pay.

And California just passed a new law requiring ALPR operators to safeguard the data and personal privacy of the individuals and cars scanned in data sweeps. With the data defined as personal, any security breach of personal data would trigger notification requirements to be disclosed to the individuals.

Essentially this gives individuals the right to sue private companies if they are hacked and their private location data is exposed. These changes to California’s civil code become effective on Jan 1, 2016. 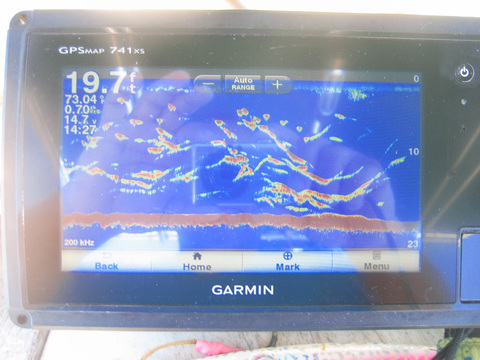 I had three trips in the last three days. All in the bay, all targeting weakfish and blowfish. Wednesday afternoon we had zero weakfish, then we anchored up on the west side of the bay and caught a bunch of blowfish. Yesterday (Thursday) afternoon, we only had one weakfish but we caught six different species on shedder crab using the ultralite tackle so it was a pretty good trip for action. The other five species were blowfish, little blues, porgies, juvenile sea bass, and fluke, no, not keeper fluke. This afternoon (Friday), we anchored up on the east side of Barnegat Bay and for the first hour we caught nothing. Wind against tide, I re-anchored three times, ....the worst. After, a little while the tide started to roll and the jumbo snappers invaded our live grass shrimp slick....hard! You couldn't float a hookbait through them so we switched to 3/8 oz. shad darts tipped with shrimp. Vertical jigging the bottom, the first few fish were small sea bass, they also run in epidemic numbers in this spot, but then we caught our first weakfish, a respectable 14 incher. After that, it was game on for over two hours we had 13 to 16 inch weakies almost as fast as you could get your jig to the bottom.

The wind is going to keep us in the bay through the weekend so we will be targeting weakfish and blowfish along with all the other mixed bag that comes with it.
Sailing Open Boat or charter Sat, Sun, and Mon. I'm stocked with live shedder crabs and live grass shrimp for the weakies, and clams for the blowfish.

Attached pic: This is the depth recorder screen while we were fishing today. 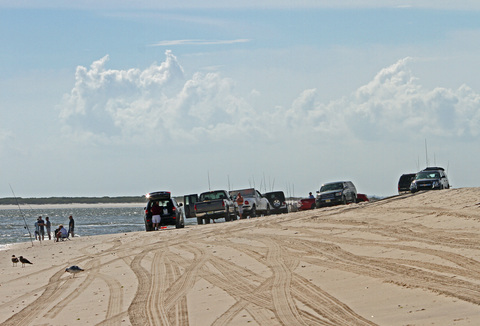 Below: Talk about getting ready to go livelining ... Moving livewell heading toward the north end. Below: Hangin' at the pool ... Holgate-style 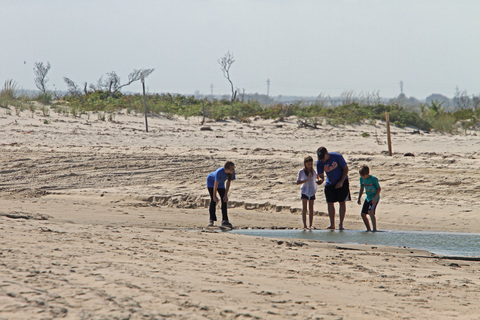 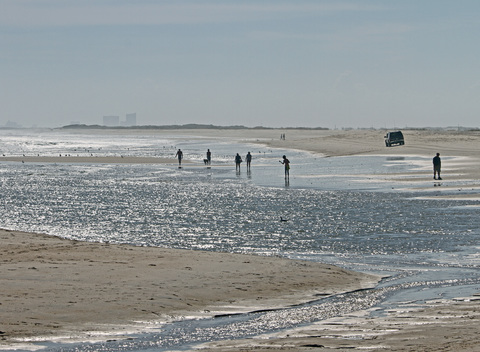 Here's a look at a lynx family ... and how cats likely first became domesticated ... 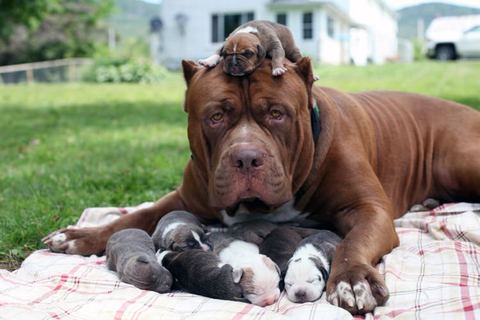 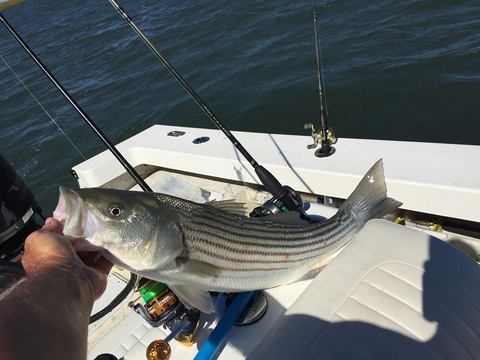 Fish Monger II Fri 9/23 Fluke Full Boat Limit (11man) to 8.7lbs - Well what a way to end an already great fluke season. Today was out last scheduled fluke trip and ended in Monger Style!!! Too the deep!!!! 90-105 ft n That's an 11 man limit of 55 keepers and one winter flounder... Day started out with an all out savage bite!!! No half hr drifts here soon as we were out of we moved right back on em. Not much drift but if u knew where u had to b it was game on!!! Mopped up a
good part of our box b4 the crowd even showed up after that we just picked away until the box was stuffed. Moved to another small spot to end the day and wrecked em there too that topped off our full boat limit. Some quality with most keepers being over 20 inches. Whole load of 3-6lbers. Just about everyone was orl with 6-9keepers each (orl). Thanks everyone for fishing with us and for another great fluke season