Friday, October 06, 2017: In case you haven’t been to the beach in the afternoon lately, the tides are astronomically low, literally ...

Kitefest weekend is upon us ... (Preview seen today) Tomorrow's Melega auction in the Eagleswood fire company hall, West Creek, has some vintage fishing plugs. Begins at 8 a.m. See them -- and tons of other stuff -- in this video ... 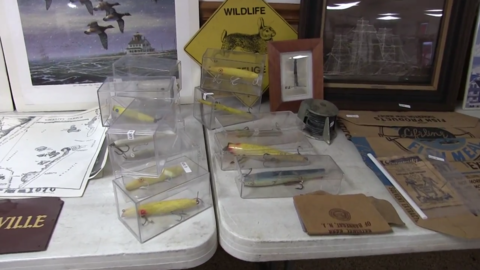 Friday, October 06, 2017: In case you haven’t been to the beach in the afternoon lately, the tides are astronomically low, literally. The full moon has sandbars popping up high and dry.

It will be an outstanding weekend to walk the far south end of LBI, mainly afternoons. Astounding number of.d sand dollars right after you walk on. These are old sand dollars -- possibly dating back many centrists, if not millennia. They're compliments of the replenishment. Please pick up and carry off any balloons found along the way. 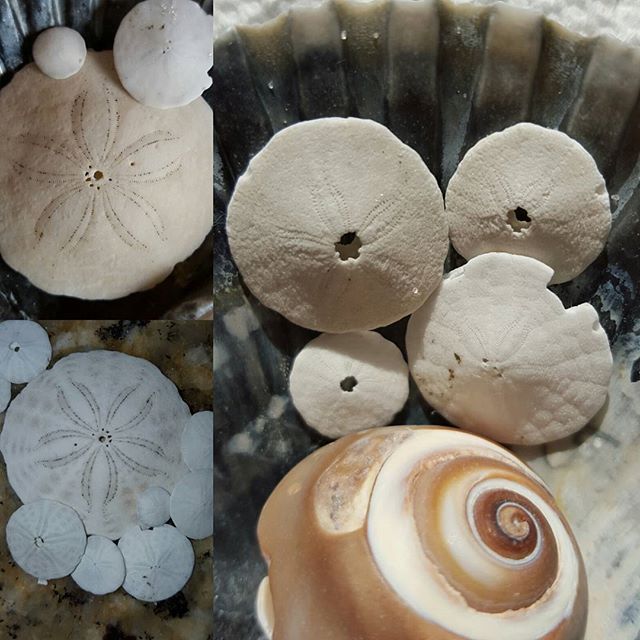 This phenomenon will impact the first days/weekend of the 2107 LBI Surf Fishing Classic, which starts tomorrow. My guess is it will drive more than a few casters to walk out use the sandbars to their advantage.

This is when I both appeal and warn that you must first be signed up to enter a fish in the Classic. In case you missed the insinuation, please don’t try to zip into the event after catching a whale of a fish. We’ll know. Not only does the beach have a thousand eyes but the timing will seem a tad odd to the event’s officials.

All ages can win:

Since I’m already being an stick in the mud, I also want to note the upped first prize for the largest bass – a comely $2,000 – comes with a possible polygraph test. Admittedly, that’s not at all out of the ordinary nowadays. Hell, offshore events have a mandatory polygraph-testing requirement for big winners.

With the Classic, the lie detector test is more of an option, though a readily available one. I think you’ll agree that it makes the event more, let's say, official. When we get back to offering a new vehicle as a first place prize, a mandatory polygraph will likely come into play.

Speaking of bass -- sure we were -- I had three separate reports of small ones caught in the front beach slews yesterday. Kurt H. had the biggest at 22 inches.

Clamming on the back mudflats of Holgate has been sorta slow right at the first bend, closest to where you can park. However, the other day I took the long jaunt to the far-back mudflats and the scratching there was better, though not great.

There are lots of chowders in that further-north mud. Those biggies are best left to reproduce -- after taking some are for chowdering down. 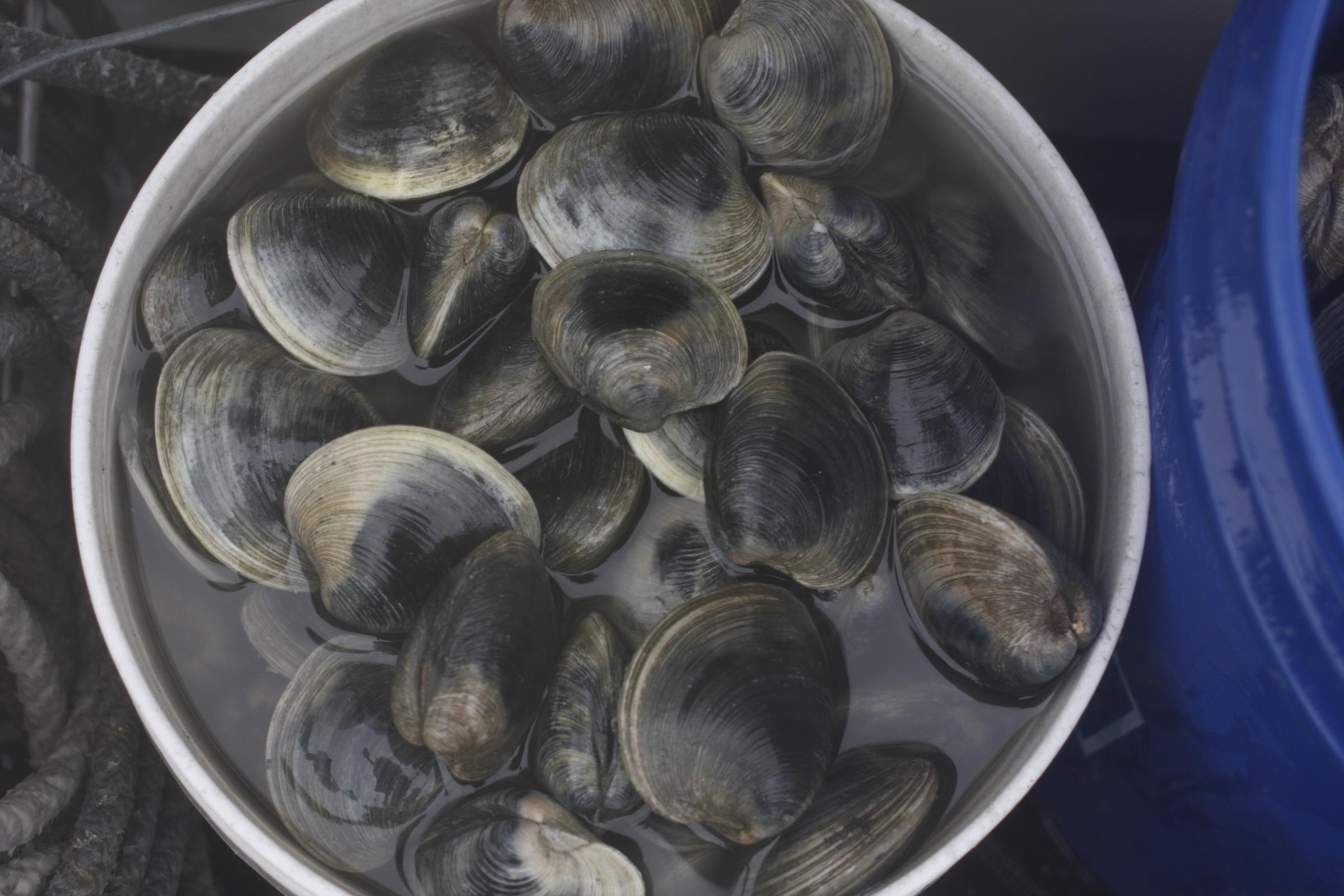 The mullet are still a sub-trickle, at best. We’re past the prime of the run to be sure. However, things have been so weird in recent years that there is no established normals, only new normals.

On the baitfish front, I’m told large schools of peanut bunker are now just outside the sandbars. They’re not quite bunched up enough to snag-and-drop.

POMPANO POWER: There are small migrating pompano by the netful. We get them most every fall but some years they’re more plentiful and larger – up to sunfish size. Years back, I even kept a few to eat; cooked them whole. Absolutely top of the line dining. I often mention that they’re $20 a pound at fisheries down south. I can taste why.

Let me tell you something about these gorgeous shiny buggers: when it comes to fast, they wrote the book. Down south, where they prosper, growing in multipound sizes, they are arguably the fastest nearshore fish out there, even outdistancing permit in the long run.

With that in mind, I’ll mention our pompano young-of-year are chip’s off the old high-speed block. The odds of a striped bass catching one for dinner is less than slim-and-none. Even gangs of mass-attack bluefish see pompano, ponder an attack and then say, “screw that.”

But, then, there’s the castnet. Even blistering speed can’t beat the power of the spread, as a snapped open 16-foot diameter net come sinking downward atop them. Now, if said castnet is thrown upon in a stretch of wide-open beachline water, those pompano would be gone before the net hits the sea. However, needing to feast on sandcrabs in the shallows, pompano will often gather in pools and dead-end troughs, making them an easy cast-upon. In good years, I’ve caught up to 50 in a single throw.

I’ll bet anything the mini pompano would be an incredible bait, either livelined or chunked. I simply don’t have the heart to kill these tropical beauties, knowing they’ll all likely make a successful migration back to the southland. What’s more, these are the future for astounding gamefish for the boys fishing them down south.

Speaking of the sandcrab infatuation of pompano, “sand fleas,” as the call them in Florida, are the prime-by-far bait used to nab big pompano. With the demand for pompano meat so rightfully high, the pressure on sand fleas has decimated their number in the Sunshine State.

A fellow who used to throw net with me ages ago, would cover cost of fuel for his annual winter trip to Florida by taking down a massive cooler filled with LBI sand crabs. He’d catch them with a modified hand dredge/scoop, made from chicken wire. There are now dozens of more advanced sand flea scoops available. Just this summer I saw a fellow heading to the beach in Surf City with one.

While on the sandcrab subject, my one-and-only above-average fishing talent was fishing sandcrabs off the ends of jetties, targeting blackfish, often visually.

From decades of bait netting, I’m geared to see tog among jetty rocks -- from whence they shoot out to grab edible morsels, as is their lifelong dining custom.

Poised on a jetty, I’d flip out a single sand crab on a dropper-loop 1/0 hook, weighed down with either a one-ounce bank sinker (on the tag end) or even just split shots on calm days. What a blast!

I used a heavy rod to pull the blackies out of the “holes” they’d bolt into once hooked. I took tog up to five pounds. Just as fascinating, I by-caught stripers to over 20 pounds, willing to inhale just that one tiny-ass sandcrab as if were caviar -- assuming fish like caviar.

My jetty togging quickly ended with blackfish restrictions out the wazoo, followed by sanded under jetties.

To this day, I fully blame too many fluke, lining the bottom like floor tiles, for scarfing down vulnerable young-of-year tautog, as they move out of the bay.

It’s almost 20 years ago that a prime mandate of the Magnuson Act was a “holistic” approach to fishery management, assuring a protected survival niche for every species in the marine ecosystem. Instead, management has become blindly hellbent on protecting the most popular/profitable species – and this includes striped bass. This comes at the expense of every other species dined upon by those chosen species. Thusly, there have been no recovery gains of significance for tog, black sea bass, weakfish, winter flounder, kingfish, i.e. species that hatch and grow in the bay.

Beautiful fall weather has finally arrived for the captains of the Beach Haven Charter Fishing Association. As they look forward to the arrival of schools of striped bass from the north and the re-opening of the black sea bass season on October 22, there are several current options available for fishing excitement.

Although the summer flounder season is done for the year and black sea bass are out of season until October 22, there are still targets for inshore structure fishing. There have been some schools of weakfish traveling along the coast. Most are on the small side, but there are keepers mixed in. There are good numbers of bluefish in the ocean and inlets. These fish range from snapper size on up to some pods of fish over 10-pounds. On the reefs, there are tautog, triggerfish, and porgies on the bite.

Recent strong winds have made trips offshore a bit risky, but now that the winds have finally settled back to normal, there are tuna, mahi, and sharks in the offshore canyons. In addition, boats making trips midway to the canyons have been finding bonito, false albacore, and bluefish.

The striper migration is still to the north of the Jersey coast, but there are bass active in the bay waters. Anglers tossing plugs, especially around the sod banks have been finding hungry bass. In addition, there is a decent night time bite around the LBI Causeway and various docks, especially those with lighting. These are mostly throwbacks, but some keepers have been caught on occasion.

As the fall winds on, there are quite a few striped bass tournaments coming up for anglers fishing from boats. In recent years, those fishing the ocean have been making a good showing. Some of the captains of the BHCFA make themselves available for charters for anglers wanting to make a good showing in these tournaments.

Closing in on another 30+ fish week.