Friday, November 21, 2014: Remarkable blowout tide today, as fully expected. Dumb-ass gulls had a heyday downing bay scallops, trapped high-and-dry at low tide. The return of bay scallops continues, though there doesn't seem to be an explosion of them out there, meaning their recovery has leveled off. Still, it's good to see they're still staging a return. As  kids we used to hunt them with mask and snorkel on the Beach Haven bayside. We'd go out on sunny days and dive the deeper holes and channel at low tide and look for their bright blue eyes. We never ate them, just hunted them and got them to jump along the bottom. I checked on some oyster beds and it’s gonna be a good pickin’ year. If you have any near you, make sure to only break off a portion from each gather.

I did Holgate and came across a heavy bit of birdplay near the Rip. I jumped out and began plugging to, surprisingly, no avail. Here’s a video of the gulls. Sure looked like a fishing indicator. Not this fricked up fall.

I watched closely and the birds were picking up what had to be small sand eels, though the pickin’s also looked just like elvers – obviously impossible. I think the super low tides might have forced baby sand eels off the back sand flats. They got hung up in strong outgoing tidal current where the birds got ‘em one good. 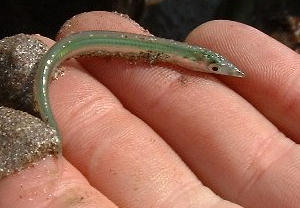 I had another easy clamming session, gathering 100 cherries and chowders in nothing flat. Again, I was getting to mud areas that haven’t been out of water in a year or so. 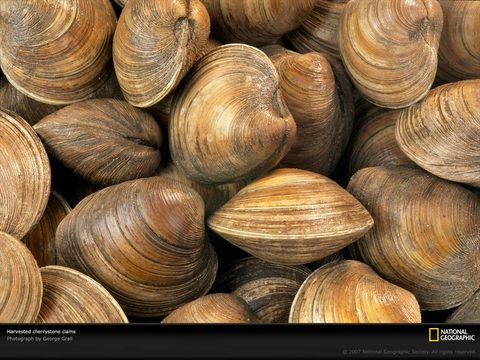 It was nippy out there, though the coolness actually worked well with raking mud, which warms the body mighty quickly. You’ve likely seen that we’ll be flirting with record warmth on Monday. Where did you first read about a crazily yo-yo-ing fall and winter weather pattern? I made that prediction based on odd fluctuations in the jet streams, fluctuation that might get even jumpier.

I wanted to make mention that cleaning waters will reopen the shot at taking goodly numbers of spotted hake. Joe H. targeted them and got a slew. Below. A simple bottom rig with a 2/0 hook and squid, clam pieces, or worms will get them biting. Bunker chunks also work if offered in sub-chunk-sized pieces. The smaller the ocean -- as we have now - the easier to feel the bite and the decent fight. Light gear works well. Think fluke-level gear. 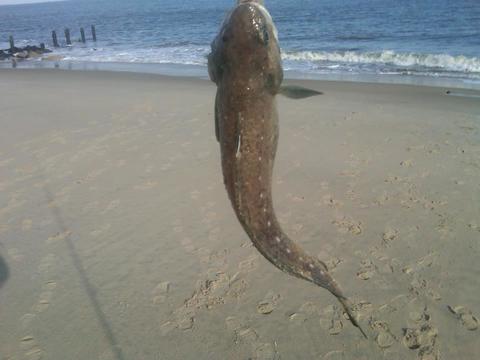 There is some mild debate on what type hake we currently have biting. I have a lot of agreement on spotted hake, including Joe.

I emailed: "By the by, these are quite likely, almost positively, Urophycis regia, spotted hake. Not ... silver hake (Merluccius bilinearis), white hake (Urophycis tenuis) or Red Hake (Urophycis chuss) -- but who's really counting." Our dads called them ling. Nah.

If you like cod-type seafood, spotted hake (and related Urophycis subspecies) are even tastier than big cod. I cook them whole (in the round, just gutted) to get the most meat but they’re a breeze to filet, though you’ll need a rag or glove to get a decent grip on them. For folks with dryers or smokers these hake can be dried, though they need a decent amount of either smoke or seasoning. They can also be dried in a Norwegian/Scandinavian manner, for any New Age types out there.

“… Firstly he taught us that only fresh hake can be dried. We chose 30 … hakes and dredged them into the mixture of coarse and table sea salt. The excess salt had to be shaken off otherwise the fish would be too salty.

“… Then we removed the head, guts, gills and peeled the skin from the stomach to the bone to make sure all the air was gone. Then the fish was tied by tails and hanged tails up. We made sure there was enough space between the fish for air to circulate freely. …”

Such dried fish is used later in stews and such. 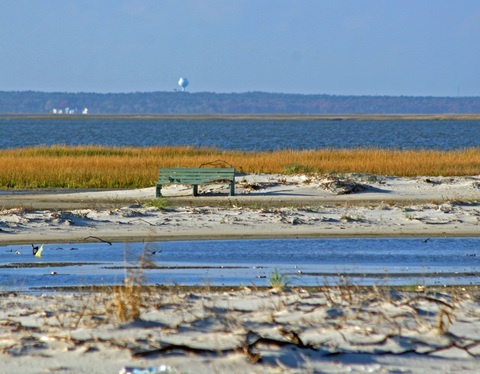 Sea Shepherd is turning its sights to illegal fishing boats this summer. The organisation is sending two ships to the Southern Ocean to chase and possibly confiscate fishing gear from boats that are illegally taking Antarctic and Patagonian toothfish from the icy waters of the Southern Ocean.

PETER LLOYD: Having fended off Japanese whaling ships the activists from the Sea Shepherd Society are now turning their attention to stopping the hunt for another lucrative ocean species: the Patagonian toothfish.

(Sound of a bell ringing)

Their next stop will be the Southern Ocean but this time it's not Japanese whalers they're after.

They're turning their sights on the illegal fishing of Patagonian toothfish.

The ship's captain Peter Hammarstedt traces their route on a nautical map.

PETER HAMMARSTEDT: Shortly we'll be leaving from Hobart. We'll be heading straight down to the Antarctic continent to an area that we're calling the 'shadowlands' of the Southern Ocean.

This is an area of water that's so remote that it's an area that these illegal toothfish operators that are targeting Patagonian and Antarctic toothfish are exploited.

It's an area where there is very little legitimate vessel traffic so the risk of detection for them is minimal.

FELICITY OGILVIE: The fish is prized for its tasty white flesh and the fisheries highly regulated being designed to sustainably manage the fish that can grow up to more than two metres.

A lot of the illegally caught toothfish ends up in Asia Captain Hammarstedt believes there are six illegal fishing boats operating in the waters near Antarctica.

He says the Sea Shepherd will be targeting the illegal fishing boats by confiscating their long lines and chasing them back to their ports.

We're basically doing the job that the world's governments should be doing and we're filling that law enforcement void.

FELICITY OGILVIE: But it could murky waters for the Sea Shepherd.

PETER WISH-WILSON: We used to, we used to send vessels to chase pirate fishers.

In fact, we chased one for nearly 7,000 kilometres once, a Patagonian toothfish boat.

It's very important to send that message these seas will be patrolled and that we are keeping an eye on them.

FELICITY OGILVIE: The Government is planning to send customs patrols to the Southern Ocean for two 40 day patrols.

And Senator Richard Colbeck who a parliamentary secretary with responsibility for fisheries, says Australia's working with countries in Asia to deny the illegal fishers access to ports.

RICHARD COLBECK: And the best way to prevent people illegally accessing the fishery is to take away their market so if they've got nowhere to sell the fish, there's not much point in going fishing and that's been proven to be successful.

We've had a number of vessels who've been denied port access already and so it's not just about sending vessels down there.

PETER HAMMARSTEDT: The reality is that we're not breaking the law, we're upholding the law.

If I, here in Hobart see somebody is robbing a bank and they're in a getaway car to get out of there and I'm in a position where I can actually stop that bank robber and turn them over to the police, then that's fully within the law.

These poachers are operating in some of the most remote areas of the world and there's nobody else that's filling that void and I see that as both a moral and legal responsibility for us to then step in.

FELICITY OGILVIE: Being in the Southern Ocean also means that if the Japanese do resume whaling the Sea Shepherd will turn their attention from the toothfishers back to the Japanese

Temperate temps for the near future and perhaps beyond, but your days of Caribbean clear clean are over.