Need I remind folks that pedestrians of all sorts might pop out ... suddenly ...

Friday, May 27, 2016: Tons of people coming onto the Island. Can’t figure out why. Maybe there’s a sale going on somewhere. Just kidding. Welcome to Memorial Day, LBI-style. Jump on in, the weather’s fine. 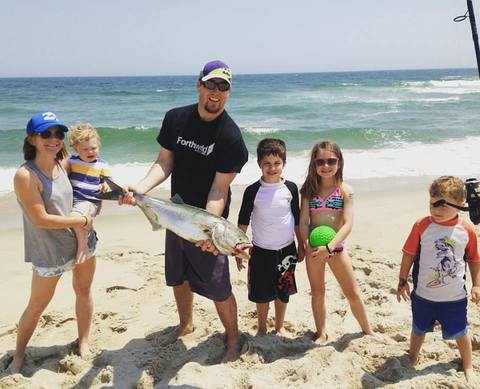 Above: Dave Hershberger Perfect start to the weekend. Nothing beats catching fish right up the street, while hanging out with the family. — with Jenny Nickles Hershberger and Emily Parker.

This is one of those times I make a likely inept appeal to locals: try to remain cool and calm despite the near overnight 180-degree change in our Island lifestyle.

And this weekend is going to be a barnburner. Of course, we ran out of actual Memorial Weekend barns to burn long ago. No matter, folks are going to cash in on a fine, albeit barn-less, holiday weekend … as right they should.

It’s time to just go with the flow – which was seriously stop-and-go during my one-mile drive from home to work today. Yes, only one mile. And, yes, I do have it fat in that work-drive direction.

As expected, the south winds (more on them below) have kicked in kinda early today, though it’s not an overly-chilled breeze, as evidenced by many a bathing-suited beachgoer lying about before noon. 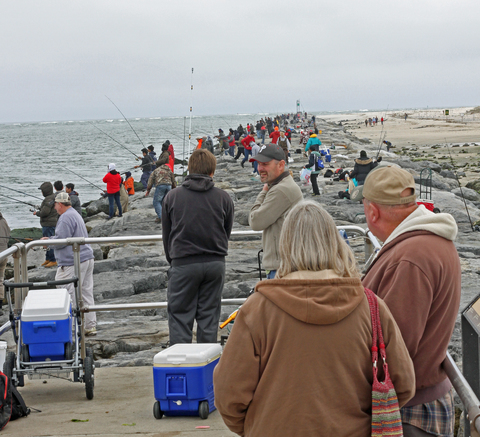 BRIDGE BEWARE: Back to that traffic thing, it’s bad -- and going to get a ton’s worse by tomorrow morning. In fact, if there’s any place I doubly ask that folks keep a cool head, it’s on the road, and especially on the Causeway.

For those who haven’t been down yet this year – and they are many, with the very iffy weather this spring – the bridge crossing is far from a breeze. Hell, there are backwoods lanes in the pines wider than the individual dual lanes coming and going from LBI.

Despite the well-marked 45-mph speed limits, there are many manic motorists who have to demonstrate their acceleration-happy driving prowess -- or obvious lack of same. As my mom was fond of screaming, ad infinitum, “You jackasses!” 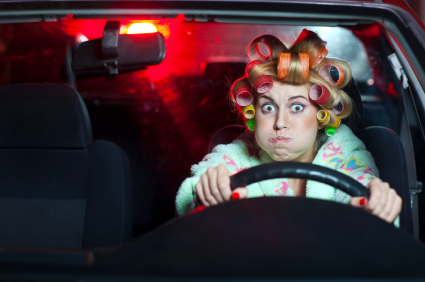 Oddly, leadfoot numbnuts are not as big a problem as line-huggers, those timorous folks driving sedans yet somehow taking up parts of both narrow lanes. I fear the most foreboding Causeway-accident scenario is a manic driver trying to get by a scaredy-cat and being forced into the concrete, potentially leading to a multi-car ricochet-effect wreck. It would seemingly go without saying that deadly problems seldom arise when folks take it slow and easy. Of course, I’m a famed slow-go, right-laner, so easy-goin’ is an easy go for me. POTENTIAL BEST FISHING EVER: As to fishing, the ocean remains very clean despite the south wind factor, which can muddy things kinda quickly.

I have to tease you with this just-in report from LBI: No, this isn't some touristy gimmick. Ask Joe H.

"Dare I say I may have had the best beach session of my life last night??? Myself and a first time caster buddy had 30 or 40 massive bluefish last night to 18lbs and I think 9 bass (I lost count) 20-30lbs. They hit everything we tossed at them. Poppers, swimmers, bucktails, and we even chunked a bunch too. Unbelievable fishing." 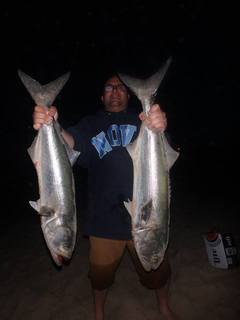 I want to point out the HUGE number of big blues that are being caught-and-released. I was asked to mention this froma number of folks responding to criticisms that too many blues are being needlessly taken. I think many an angler has now had their fill of bluefish -- for dinner and even for the freezer. And i think next to none are being kept for fertilizer, the old go-to for folks fretting over a wasteful over-taking of bluefish.

Bass are still a steady pick. Boats rock but may rock a tad too much in coming days to do much with sang 'n' drop.

Love popping striper cherries on a mojo!!! Can't thank @magictailbucktails enough for setting me up with the right stuff to slay beasts!!!!

Now to those south winds, which I’ve put off discussing – as in the 800-pound gorilla in the sky. While I saw a southerly fetch building, I now this the its obstinacy. While I still see mornings as being doable, boat-wise, I also see some brisker afternoon winds, to 20 by late-day. Even with that small low-wind window, many mariners will be boarding their just put-it vessels. The bay won’t be a problem, but those captains with smaller crafts might want to rethink trips up to Seaside. It’s a breeze getting there and a bitch getting back – a potentially risky "bitch" with a boat back in the water for the first time in months. You can't tell me boats can't be bitches at times.

Below: Bonnie is part of our south wind syndrome. She's playing a blocking-action role for fronts. It'll get more interesting mid-next week.

And here I thought Bonnie was here in Manahawkin.

An area of low pressure between Bermuda and the Bahamas is becoming better organized and will likely develop into Tropical Storm Bonnie, according to the National Hurricane Center.

The decision facing the captains of the Beach Haven Charter Fishing Association this Memorial Day Weekend is just what fish to go after. There are still big bluefish around, a goodly amount of striped bass, a decent bite of summer flounder, and recent black sea bass results have been off the chart.

Captain Fran Verdi on the “Francesca Marie” had a very pleased party when they managed to boat 32 nice sized keeper black sea bass while fishing inshore structure. Comments were heard on board concerning “fish tacos” for dinner.

Captain Carl Sheppard had the Lavagna party from Mt. Laurel out on the “Star Fish”, and they wanted to catch some big bluefish. Fishing at the entrance to Great Bay the group caught fish steadily ranging from 8-14 pounds for four straight hours. They jigged with diamond jigs and trolled. Another day Captain Carl had a group out and they headed for the reefs looking for black sea bass. The group of 5 anglers managed to boat over 80 sea bass and brought 14 nice fish home in the cooler.

Captain Ray Lopez has been catching big striped bass just north of Barnegat Inlet on the “Miss Liane.” Joel and Mike were celebrating Joel’s birthday and the fish did not disappoint. Joel managed to put a 30-pound bass in the box and before the end of the day caught another even larger fish. Earlier in the week Andy and Max Goldman were out looking for bass and 13 year old Max caught his first ever striped bass, a 27-pounder. In all, the group ended up with 3 stripers and 6 big bluefish to 12-pounds.

Additional information about the Beach Haven Charter Fishing Association can be obtained at www.BHCFA.net. 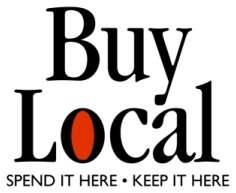 Hey, not that you don’t do it already but make sure to patronize local tackle shops – and Island businesses in general. The box stores on the mainland get plenty of business. It’s us local folks who care for you – and about you. You won’t get that close-up-and-personal touch at Walmart and the likes. And our Surf City Tuckerton Lumber is the finest and friendliest “hardware store” (the old term) you’ll find. No, I don’t get a free window ice-scraper for saying that. I just think they’re a perfect example of a cool LBI business.

I'm taking a big risk by leaving Florida for the summer to go back to NJ and chase the dream. I am not sure how things will go, but I am going to give it 100%. Every year seems to get better and better, and I am looking forward to what is in store for us in 2016. We will be fishing harder than ever before with 66 (or more) nights on the sand. During which, I will work tirelessly to get every possible client on the fish of a lifetime, all while teaching the importance of conservation, and gently releasing every single one. I am beyond grateful to everyone who has helped make this possible thus far, clients, family, girlfriend, sponsors, you all play an important role in where this adventure will take me next. Until then... Let the countdown begin! 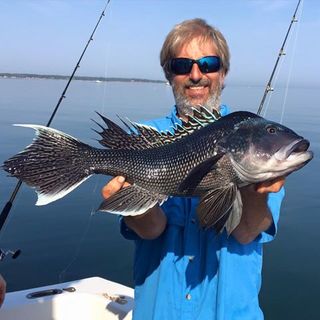 "It's an illogical fear of snakes people are born with or it is ingrained from a very young age that they are a bad creature," 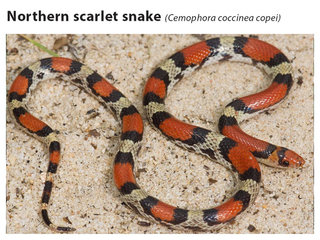 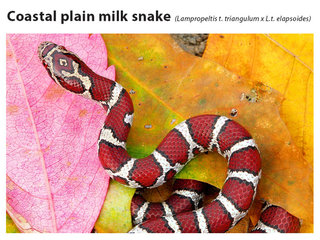 Slithering in NJ: Meet the 22 snake species of the Garden State

New Jersey is home to 22 snake species, two of which are venomous. Click through the gallery and read the caption to learn a bit about each one.