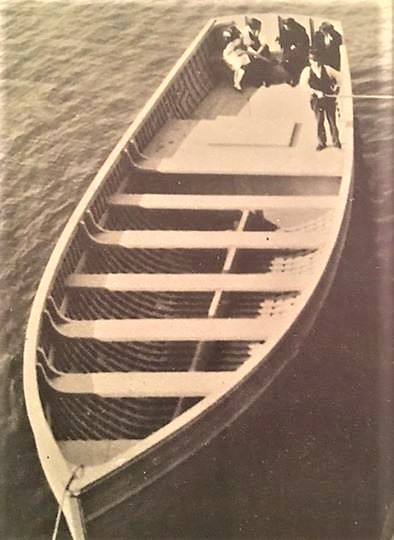 Last week got a red drum on bunker. Today a black drum & bluefish

It's on... bass and blues are in the LBI surf!!! Peg Bucci of Manahawkin weighed in this 36 pound bass this evening. She reported, "I set up my first rod and was quickly bit off by a bluefish. I re-rigged and shortly after hooked up with a good fish. After a 20 minute fight I landed it. Thanks to the Fish Head's morning guys Joe and Kevin. They've helped me out big time getting to this point." 43" 36 pounds! Awesome Fish Peg!

Friday, May 10, 2019: Well, I had tried my best to coax some cooperative winds but they honked yesterday out of the NE, kicked hard out of the east and will now go SCA out of the SE, then SW and eventually NW. The W wind phase might be the best chance at surfcasting and bay boating … before the s*** arrives. Don’t say it. This is becoming of the crappiest – and chilliest springs in recent memory. Maybe it’s just me and my thinning skin. By the by, there could even be some minor/typical road flooding early next weeks should the expected 25-mph-plus onshore winds pitch in, as we inch toward full moon. From my multi-decade waveriding experience, I can strongly note that the ocean can be nastiest – wave- and height-wise – in the week preceding full moon, i.e. this coming week.

Reports of bass and blues are still arriving left and right. Out of fairness to reality, there are also skunks, along with skate showing. I see where brown sharks are already in the surf system. One was pushing five feet … body length. That means the famed extended tail was not measures in.

On the shark subject, the state records in my last blog showed the weights of many shark species now totally – and enforceably – forbidden from being kept. Obviously, those record takes were taken prior to the powerful pro-shark regs now in place. Even the red drum top spot in the NJ books is off the table since redfish over 27 inches cannot be kept.

I promised myself to not further burden readers with more heated hubbub over upcoming striped bass rule changes so I’ll only nonchalantly mention there is a fair to middling chance that the keeping of larger bass – possibly as small as 40 inches – might be prohibited by next year … unless leveler heads prevail. Not that there’s much of a chance for anyone to top the McReynolds 78-8 … especially in this day and age. Obviously, any new slot rule for next year could just as quickly vanish the following year, as the reality sneaks in that the bass biomass is just having a few bad spawns – though I perpetually worry that pollution might be a nasty-ass player. That opens up a whole other can of bloodworms. Taming ecological and environmental attacks is a slow go, especially when we’re flushing steroids into sewage system. Even the most minute presence of human sex hormones (from birth control pills to Viagra) can confuse and ravage a spawn. As you might know, those chemicals manage to make it through even the finest sewage treatment facilities.

Here’s an excerpt from www.scientificamerican.com:

“Pharmaceutical drug contamination in our groundwater, rivers, lakes, estuaries and bays is a growing problem. Millions of us are flushing unused medications down the toilet and discharging them in our body waste—even though sewage treatment plants and septic systems were never designed to deal with such contaminants. Additional discharges by healthcare facilities exacerbate the problem. As a result, researchers have identified traces of pharmaceutical drugs in the drinking water supplies of some 40 million Americans.

“A nationwide study conducted by the U.S. Geological Survey in 1999 and 2000 found low levels of pharmaceuticals—including antibiotics, hormones, contraceptives and steroids—in 80 percent of the rivers and streams sampled. According to Citizens Campaign for the Environment (CCE), the effects of constant, low-level exposure of pharmaceuticals on ecosystems and humans are uncertain, though “possible health concerns include hormone disruption, antibiotic resistance and synergistic effects.” And antidepressants, says CCE, can “alter the behavior and reproductive functions of fish and mollusks.

“CCE cites a recent Stony Brook University study showing that some fish species in New York’s Jamaica Bay are experiencing “feminization”—the ratio of female to male winter flounder was 10 to one in the studied area—likely a result of flushed pharmaceuticals that can act as ‘hormone mimics’ and cause such effects. New York’s Department of Environmental Conservation concurs, citing a number of other studies underscoring the impacts on aquatic life. What irks CCE about the problem is that almost all known sources of drugs in the environment first pass through wastewater treatment plants where they could be filtered out, but these facilities are not required to be equipped with pharmaceutical filter devices.”

Quick run after work tonight. G got our first striper of the year on a popper! Happy kid!!

Central Region Highlights
CPOs Riviello, Mascio and Lt. Martiak conducted a two-night saturation patrol on the Raritan River
from Edison to New Brunswick focusing on striped bass anglers. Four summonses were issued for
undersized striped bass and one littering summons was issued. CPOs Riviello and Mascio extended
their patrol and assisted the MRO officers with surveillance of striped bass fishermen in Perth Amboy
which resulted in additional undersized striped bass summonses.
CPOs Carman, Mutone and Lt. Martiak responded to two Operation Game Thief calls on subsequent
days one weekend. During one call, a fisherman at Assunpink Lake, a trophy largemouth bass lake,
was reported to be catching and concealing undersized largemouth bass in a cooler within his vehicle.
After several attempts to deny the possession of the fish, the subject eventually showed the fish to the
officers. He was issued summonses for undersized bass and interference. The other OGT call
5
involved a report of campers utilizing a firearm to shoot squirrels and fish without licenses in Ocean
Twp, Ocean County. CPO Carman’s investigation determined that the group was shooting cans with
an air rifle. One summons was issued.
CPOs Riviello and Mascio patrolled the Delaware River, targeting striped bass during the closed
season. After several inspections, they found a man hiding a under sized striped bass. CPO Riviello
issued the appropriate summonses.
CPOs Garofalo, Riviello, Carman and Lt. Toppin responded to NJ Forest Fire’s initial request for
assistance for the Spring Hill Fire that threatened homes north of Route 72 in Burlington County.
After working a long night keeping onlookers and travelers from entering the Greenwood WMA tract
of land, CPO Riviello joined Lt. Martiak the following morning to keep motor vehicles from
circumventing the blocked portions of Route 72. CPO Riviello wrote three ATV operators for trying
to gain access to blocked off areas of Route 72 where the fire was still burning and only partially
contained.
CPO Riviello handled a complaint involving a young man shooting Canada geese out of season. The
man was trying to remove geese from his family farm pond when several complaints came in about his
actions. CPO Riviello investigated the activity and found that the man had shot several geese off the
pond. He was cited for hunting out of season and without a valid license. He was also given warnings
for not possessing a valid waterfowl stamp and for failure to retrieve the geese

I have a question for all you fisheads...

Frog’s Tongue Sinkers. I’ve been using and now have the molds and make my own Hatteras sinkers for years, until last week. LBI had some of the strongest currents/tides last week that I have seen, in Surf City I couldn’t hold a chunk with 12oz! I met my buddy in Ship Bottom and after my rant on hating to have to use more than 6-8oz he threw me this weird lead thing and said “try this”. A quick tutorial on how to get the Tongue to burrow in, and 6oz was all I needed for the rest of the week.

Question: Do any of you out there know where I can find molds for 6, 8, and 10oz Frogs Tongue Sinkers? Best I’ve found on the Web has said I’d need to order and buy a custom mold. Custom = Stupid Expensive = Cranky Wife = No need for sinkers cause you ain’t goin fishin

Any help is appreciated!

Through the rulemaking process, NOAA Fisheries is considering whether current area-based and gear management measures remain necessary to reduce and maintain low numbers of bluefin tuna discards and interactions in the pelagic longline fishery for Atlantic highly migratory species given more recent management measures in the fishery. A Draft Environmental Impact Statement (DEIS) has been prepared to evaluate a range of potential management alternatives, and a Proposed Rule is forthcoming.

The need for this action was driven by:

The proposed measures could affect any U.S. pelagic longline commercial fishermen who fish in the Atlantic Ocean, including the Gulf of Mexico.

The proposed measures are expected to increase the flexibility of pelagic longline fishermen targeting swordfish and tunas by increasing the amount of area open to fishing and reducing the Gulf of Mexico weak hook requirement from year-round to seasonal (January–June). Bluefin tuna would continue to be managed within the limits of the ICCAT-established U.S. quota and domestic quota allocations to different fishery categories, which are not affected by this action.  Some of the preferred measures have an evaluation component to determine whether the area-based restrictions remain necessary, or whether the IBQ Program, without the area-based restrictions, will adequately limit bluefin bycatch in the fishery.

The Draft Environmental Impact Statement analyzes the potential environmental impacts of a range of alternatives, including preferred alternatives, to meet the objectives.  A proposed rule is expected to be published soon and will include a public hearing schedule and public comment period for the proposed rule.

The preferred alternatives are summarized below: 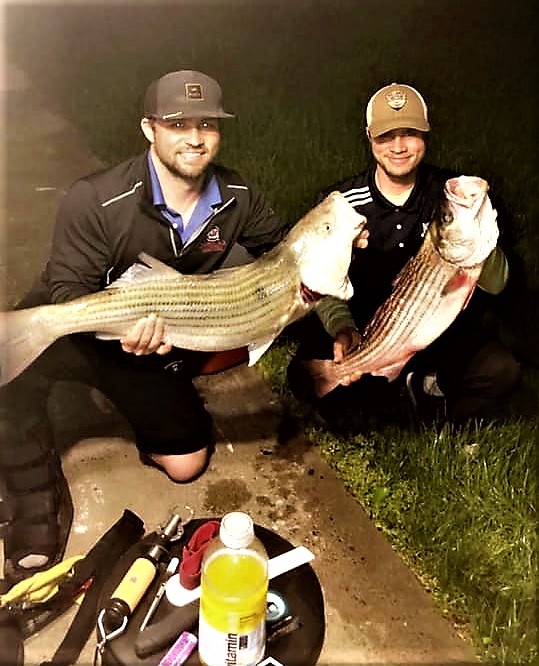 Brothers on fish
Mike & Brendon P last night, south end
Mike got his on a plug

LOCAL INTEREST: (Click on photos) For Beach Haven West pedestrians and bikers wanting to get to LBI, here’s a look at the new sidewalk east of Morris Blvd, south of Rte. 72. The sidewalk runs parallel to Steven Drive, then, off Selma Drive, it down-slopes a bit and goes under the West Trestle Bridge (photo from north side of trestle bridge), allowing access to the north side of the Causeway -- where the cross-Causeway sidewalk will soon open over to the Island. Today the DOT was placing some pines trees to spruce up the look of the walkway.