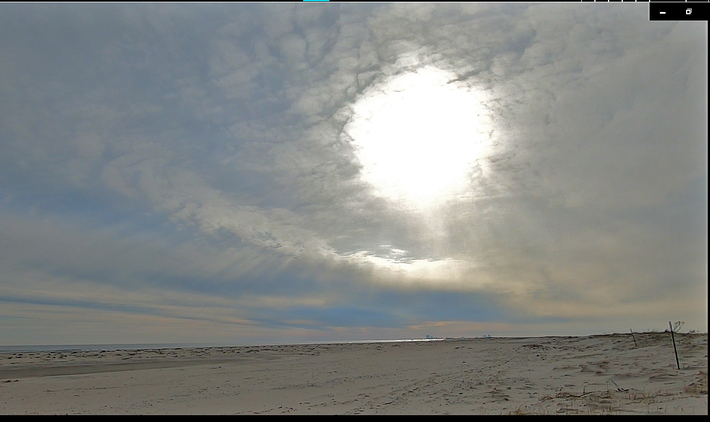 Uh, the blind suddenly see! What an odd first sight. 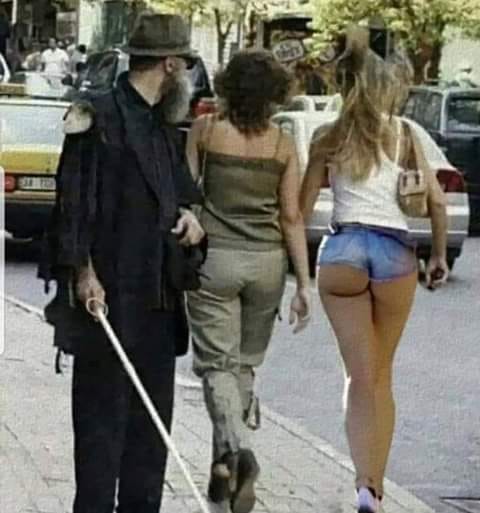 Friday, July 12, 2019: This time it’s really gonna get hot, even for the Island. The sea AC will not be blowing very hard. In fact, get crankin’ for the canyons. The only problem might be a bit of doldrums out there. Speaking as if I know what I’m talking about, big game troll fishing seems better when there’s at least some slop on the surface, though my biggest marlin came on a day with nary a whisper of wind, albeit overcast.

We have west winds today, which might invite in the black flies. There might also be some greenheads, though their season is just beginning. It runs a little later than stables flies, the official name of black flies. My most hated biting bugs are gnats. I’ve gone batty with them when boat fishing and now and again when fishing the west side of Holgate. They might very well be showing heavily, bayside. Be ready with bug juice.

By late tomorrow we might see a late-day push of anti-fly south winds. Overall, we have a load of buggy air settling upon us.

Flukers could be begging for wind to get enough of a drift going. A lot of fluking fun is lost when needing to keep motors running to bump around. Yesterday, I showed a nice fluke caught in the surf. Today I got word of an early a.m. doormat taken on a teaser in front of a jig. That could be a surfcasting trend if the bay water gets too warm – lowly oxygenated – with this heat wave. Inlet areas should definitely be worth a flattie drift, though boat traffic gets to be too taxing.

Resident striped bass are being anything but cooperative for pluggers I know. Short of a super-short (maybe 14 inches) taken on a kingfish rig in the surf, I haven’t heard of any decent bassing – except in Facebook posts from up New England way. The BL North Jetty should be holding some, though. The problem for most of the LBI beachfront is the lack of structure, i.e. jetties/groins. Duh, right?

The kingfish bite has fallen off but only marginally. It is now the talk of much of the Jersey coastline. With the kingfish availability, tackle shops are almost selling out of dedicated kingfish rigs. The reason is simple: They truly work. Plus, their relative uniqueness makes it easier to buy them premade than go out and get small hooks, small floats, small clasps, etc. Small bloodworm pieces out-catching fake-o baits, but not by much. Many folks combining both pieces of both, either on the same hook or on separate floats.

Shark fishing will loom large. We’re at the height of the brown shark arrival and sand tigers are as plentiful as experts have ever seen. I’ll again note that kingfish racks make a real decent shark bait. I was also told that whole shedder crabs will attract every shark within a mile. Kinda costly, though – plus the dogs tear into them.

Forgot to mention a fun message I got from a fellow in NSW, Australia. Along with noting it’s hard to find a SandPaper thereabouts – I’ll have to look into that – he sent a wild video of killer whales in action Down Under. Those orcas are some nasty ass buggers. Glad they sorta like humans. Of course, birds sorta liked humans until Hitchcock got hold of them. Movie soon to be released: “The Attack of the Land Orcas.” 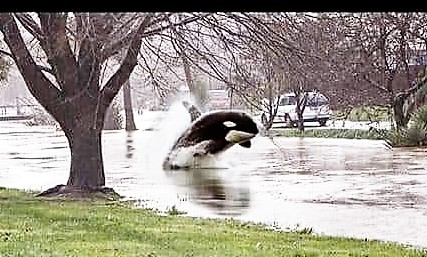 A nice showing of smaller blues if you can find them. Email: “Jay, I know you’re into smaller blues. … Got a load of one pounders that were perfect smoking thickness.  I’ll drop of some when done.” 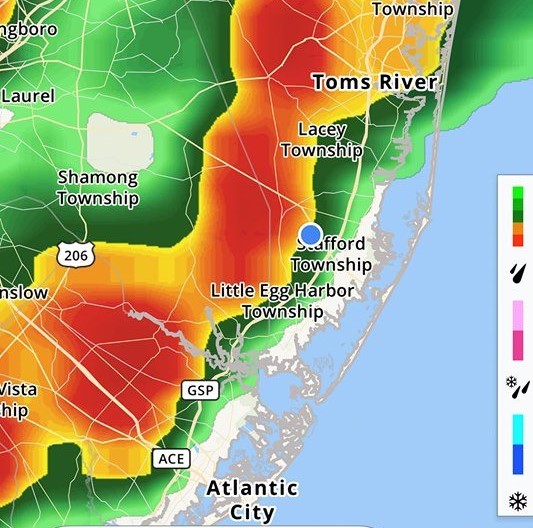 NO EXIT!: The heavens let loose. Just that fast, we became an island alone, insular in our inability to get off this 21-mile long strip of vulnerable sand. Last night, all traffic on and off the Island was put on hold by a cloudburst thunderstorm. I estimate four inches of rain in under an hour. Ironically, my official rain gauge was in my room after a clean-up. Talk about dropping the ball.

It was truly an instantaneous flood, more like a Flash Gordon flood, which is above your everyday flash flood. Things got so deep, circa midnight, there was no way of transiting the outgoing Causeway, aka 8th Street, to reach the first bridge. Police tried directing traffic to alternate east/west roads, like 6th and 7th streets -- to Barnegat Avenue, then south to the Causeway. Those sideroads almost immediately gave up the ghost of passability. As to coming onto the Island, it would have been easier swimming over. The road was closed by Stafford.

Due to its late-hour arrival, most on-Island folks missed being monetarily marooned -- all alone in the ocean zone, for over an hour. The concept of “All revved up with nowhere to go” had a nasty smile on its face.

Flood Lesson Revisited: When things go south … we stay east – whether we like it or not. It can happen in a flash.

As is oft the case with flash flooding, the instant inundation drained off almost as fast as it gathered. By 1 a.m.-ish, you could again go Causeway. Early morn Island commuters had no clue about just how many feet of water had covered the roadways only hours earlier.

To be sure, deluge downpours have flooded LBI to high heaven since long before Lenape times. But, are they getting more frequent? Duh.

While rising oceans aren’t playing into our flooding to the predicted nth degree, we are already being plagued by something a lot more complex, something that would be taking place even without our ruining the atmosphere. It stems from our Island sinking, actually closer to settling in.

When I suggested that sinkage theory decades ago, all I got were skeptical chuckles from brain trusts who wanted something sexier to be taking place, like wholesale oceanic over wash. Now, the sinking angle is so viable it is included in rising-seas vernacular, as something called relative sea rise. Just this week, the term is being bandied about in New Orleans, among the sinkiest of all cities -- though Miami is no sinker slouch. Our sinkage is also real as rain. You see what I did there, right?

Feel free to caress global warming doomation, ye of cataclysm mindsets, just realize that Island sinkage is a flood player that is showing first and foremost, as in here and now.

As I’ve idly pontificated in the past, we have the weight of a gazillion tons of traffic and heavy-ass structures bearing down on the sands beneath our feet. Just as weighty are flood waters themselves, carrying trillions of pounds of weight. Talk about adding pressure to the compaction of sand.

The press-down effect of flooding is most obvious in areas we designate as “prone to flooding.” Proneness gets heavy fast. The more Island areas flood, the further they’ll flood in the future. Problematically, there’s then an adjacency effect. Formerly unprone areas residing near prone zones soon find themselves in the soup. It’s a sinking feeling – and part of life hereabouts.

Can anything be done? Sure. Why not. We’re the smartest creatures this side of Pantera, a star in the Ensiferum galaxy. In fact, there are pumps soon coming to the very Ship Bottom areas that just overflowed. Pumps are also planned for the Boulevard areas in south Ship Bottom. They’ll likely work with rain deluges, as they’ve been working in other areas along the coastlines. However, when it comes to tidal flooding, like that issued by cyclones and such? Ain’t nothing can pump off water of that magnitude.

What’s to be done in those cases when there’s no answer to “Who’ll Stop the Rain?” I can sing it out with that ketchup song by the girl in the tight shirt, something called “Anticipation.” It truly comes down to anticipating things going seriously south … and being “Born to Run.” (I have the radio on as I write this, can ya tell?)

While there’s no second-guessing sudden summer downpours, much can be said for having a big-picture emergency exit strategy, emphasizing the need to get off the Island in a quite-timely manner. We’ve never been so equipped to follow impending weather on a minute-to-minute basis, thanks to realtime reports by the National Weather Service and The Weather Channel. I’ll cautiously venture to say a so-called “big one” will never again sneak up on us like it did in March, 1962. It comes down to us being willing to see the “Run!” writing on the weather wall.

I know this has ended up being another endorsement of the storm-ready thinking. I’m just constantly being asked by emergency preparedness folks to keep reinforcing the notion of always being ready to bug out, borrowing a term from those who seemingly live just to survive. Hey, they’re the experts so it’s worth taking their advice in this instance.

Summer fishing patterns have arrived in Beach Haven for the Captains of the Beach Haven Charter Fishing Association. The waters are warming, and the variety of fish available to be caught is wide.

Captain Bob Gerkens reports the “Hot Tuna” fished the Mid-Atlantic Cup Blue Marlin Tournament with Mike Yocco from the “MJs” and his crew at one of the Northern canyons.  During the 9 hours of the tournament only one marlin was raised, but it did not take any of the boat’s offerings.  However, in the several hours of non-tournament fishing, 8 yellowfin tuna were boated, 3 of which were 40 to 60-pounds and a gaffer mahi of 20-pounds. This weekend the “Hot Tuna” will be fishing the Ocean City, Maryland, Tuna Tournament. Following that event Captain Bob will be open for offshore charters.

Max Rosenthal, mate on the party boat “Miss Beach Haven” reports the ocean fishing has been steadily improving. On recent trips keeper fluke, bluefish, and black sea bass have been coming over the rail. Max says that in many cases the females have been outfishing the male anglers.

Captain Dave Kreines reports he had the Turcich group out on “Byte Me” Charters for a half day bay fishing trip. The action was slow with a few short fluke and one giant sea robin. The next day the Martin family caught loads of short fluke with one nice keeper.  The action was steady all day with an assortment of dogfish, sea robins, and one blowfish. The kids aboard had a great time.

Captain Brett Taylor of Reel Reaction Sportfishing reports he is taking parties both to structure for bottom fish like ling and black sea bass while also continuing his productive fluking. He had Steve Trapp, daughter Angela, and friend Joe Kacez on a 4-hour bay fluking trip. Despite strong winds they ended the day with 8 keeper fluke to 5-pounds.

Captain Gary Dugan has been fishing ocean reefs and structure for a while now and reports the fluke fishing has been getting better and better. He says he is putting fluke in the cooler almost every trip. He is especially exciting about this time of the year with the variety of species he is seeing. In addition to the fluke, he has been catching black sea bass, bluefish, cownose rays, sharks, sea robins, and skates. While not every fish is a keeper, the rods are steadily bending.

Captain Gary has been busy also co-hosting a tournament for the Italian American Club in Little Egg Harbor. The captains meeting is Friday, July 19 at the Club at 105 Falcon Drive. Fishing is all day Saturday and half a day Sunday. In addition to many prizes there is a gala party after. Call Gary at 609-760-3717 for info on this great cause benefiting the club’s scholarship program and the emergency community relief program.

I'm not endorsing -- or being endorsed -- by this company, just thought this shirt jumps out ...