Friday, February 24, 2017: It’s freaky warm again, with a month left to go in winter, if you go by the equinox -- and not the March 1 beginning of spring used by the weather folks.

I have based my predictions of winter mildness on Callie weather.

The storms that have blasted the Left Coast, many say because of Pacific oscillation impacts, have led to related, winter-long influxes of warm Gulf air moving upward into the Midwest – and, then, over our way.

Without guessing at the still-baffling mechanics of the El Nino oscillation, it can apparently enhance, or possibly direct/redirect, West Coast winter storms, which primarily move onshore out of the northwest, guided by jet streams. Then it goes all chicken or the eggish.
Is it existing, overall weaknesses and fluctuations in the jet streams that leave the storms essentially vulnerable to El Nino impacts, or do the El Nino impacts reduce the guiding force of those jet streams?

Below: This is close to our set-up, though not exactly. The weather never totally plays by the rules. The lower part of the "split flow" isn't quite playing out. 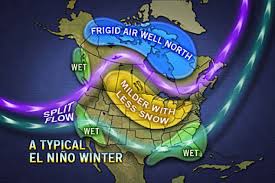 Regardless, I’ve seen many years when stormy West Coast winters lead to mild East Coast winters. While that observation falls somewhere between science and anecdotal, for layman like myself it’s sure worth keeping in mind. Now, trying to figure out in advance when stormy winters are in coming to California and thereabout, that’s the big-boy prognostication challenge.

By the by, there is not necessarily a correlation between mild Eastern winters and scalding weather the following summers. In fact, records show a tendency (ever so slightly) in the other direction, i.e. normal or even slightly cooler summers, relatively speaking. Even with normal in play, I wouldn’t count on AC bills being much lower.

I’m portending a sizzling early summer this year because of -- wait for it, science buffs – the law of averages. We’re due – and then some if you’re into the planetary warm-up thing.

More sciencey, I hope you like southwest winds … out the kazoo. Sorry boat anglers but right now it looks like we’ll be leaning into a honking south-wind summer, especially late day. I’ll get a better upper air current read come May, when jet stream patterns settle in.

Will Bermuda high pressure systems, missing for many a recent summer, finally prevail again in 2017? Likely no. But since I’ve already taken too much of your time, I’ll save that predictive explanation for slightly cooler days to soon arrive. For now, get out and enjoy today’s mid-70s on the mainland, I am. Multiple cities—from Washington, DC to Toronto to Milwaukee—smashed temperature records this week, as a record February warm spell continues to spread across the U.S.

Nearly 3,000 daily maximum temperature records were set during the first half of the month. During the past week, 736 record highs were set with no record lows recorded. Thursday, Falcon Dam, Texas recorded a (yet unverified) temperature of 107 F—the highest temperature ever recorded in the U.S. in February.

The unusually early spring weather is triggering a new type of guilt among the climate conscious: Both the Chicago Tribune and the Atlantic highlighted this week the bizarre mental calculus of enjoying warm weather that's a clear sign of a changing climate.

NEVERENDING DAYLIGHT SAVINGS TIME: The state of Massachusetts is strongly considering going off on its own, as other states have, regarding Daylight Savings Time – or not. As you might know, in the contiguous US, Arizona refuses to recognize/accept DST -- though Navajo reservations within that state  – and hopefully in a form of sunny screw-you-ness – do accept DST. “Good-morning, Arizona, this is your wake-up in the a.m. DJ. Better get movin’. It’s 7 a.m. Arizona Time … and already 8 a.m. Navajo Time.”

There is also D.C. talk about staying on DSL year ‘round. Count me in. In fact, if there are any marches to rally for a constant DST, hand me one of those fancy drum major batons. “Yeeha!” … or whatever a marching band leader yells.

A recent Associated Press article read, “Benefits of having daylight saving time throughout the year could include energy savings and less seasonal depression, proponents suggest.

“Skeptics argue it would be impractical for Massachusetts to make such a change on its own if the rest of New England does not. And if the sun sets later in the day it also would rise later in the morning, posing dangers for children walking to school in the dark.

I did mainly a Pinelands drive today, driving though miles of recent prescribed-burn country. There was many an eerily smoking stubble puffing away like hanging out on an easy chair. Doing search-abouts after these clear-burns sometimes allows me to find old sites since the underbrush is gone. It offers an ideal look-see of the lay of the land.

I even got in some charred-earth walks. My light denim pants became highly tiger-striped – and garnered some odd looks when I later zipped through Shop-rite for some quick eats from their warm food section. Quite tasty.

Note: I’ve already had a couple ticks visit me for 2017 … but I deserved them. I’ve been deep woodsing it; far off the beaten path … and into the undergrowth. They’ve all been wood ticks, no dangerous deer ticks. I can’t tell if this will be a bad tick year or not. I’ll get a good read very soon. 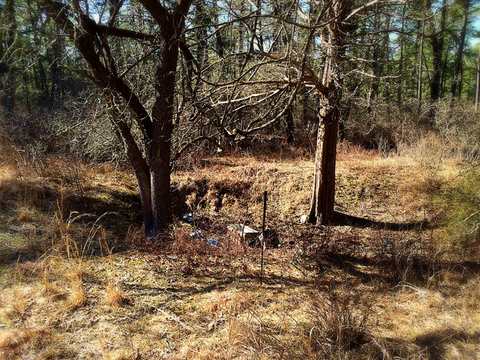 
Portland, Maine - An executive order by President Donald Trump designed to radically cut back on federal regulations has spurred disagreement among fishermen about how it will affect them — and lawmakers and regulators aren't sure what the answer is.


Groups that represent both commercial and recreational fishermen are divided over whether Trump's "one in, two out" approach to federal regulations will benefit their industry, harm it or not affect it at all.


Meanwhile, the arm of the federal government that regulates fishing, the National Oceanic and Atmospheric Administration, is still trying to figure out exactly what the executive order means for fisheries management.


Trump's order in January says that when a public agency proposes a new regulation, it must also identify two regulations to be repealed. The order caused a flurry of debate, and a lawsuit from political opponents, over whether it's a wise idea or even possible.


NOAA's National Marine Fisheries Service manages hundreds of fish stocks and is responsible for managing rules such as seasonal closures and quota limits. U.S. fishermen caught nearly 10 billion pounds of fish in 2015, under voluminous regulations managed by NOAA under the Magnuson-Stevens Fishery Conservation and Management Act .


Several fishing groups, ranging from the Alaska Longline Fishermen's Association to the Massachusetts Striped Bass Association, are joining Democratic Reps. Jared Huffman of California and Raul Grijalva of Arizona in asking Trump to rescind. They describe the order as arbitrary and dangerous.


"There's no doubt regulations have stifled our industry," said Bob Rees, executive director of the Association of Northwest Steelheaders. "But those regulations exist for a reason, and it's the long-term sustainability of those stocks."


Other industry interests, including the Fisheries Survival Fund, said the order will likely leave fisheries unaffected. The order would apply only to financially significant regulations, and that would not include things like opening fishing seasons and enforcing catch limits, said Drew Minkiewicz, an attorney for the fund.


"All this talk about how you're not going to be able to manage fisheries — not true, doesn't apply, not going to happen," he said.


NOAA has not yet determined what the order will do to regulations. The agency issued a statement that it is working with the federal Department of Commerce, Office of Management and Budget and the Trump administration to determine what it means. For now, NOAA is implementing normal management measures, and "everything is proceeding as usual," said Jennifer Goebel, an agency spokeswoman.


The White House did not respond to calls and emails from The Associated Press seeking comment.


Environmental groups, including the New England-based Conservation Law Foundation, have also opposed the executive order because of its potential impact on fisheries. Rep. Huffman said the possible impacts of the executive order need to be taken seriously, and the administration should at least clarify them for the industry.


"All we have is the hope that regulators will be allowed not to jump through these hoops when it comes to fisheries management," he said. "We are worried about it and it would be great if this administration could just clear this up once and for all."