Friday, August 16, 2019: Weather should be fine for fishing, though the torridness will make itself known ... 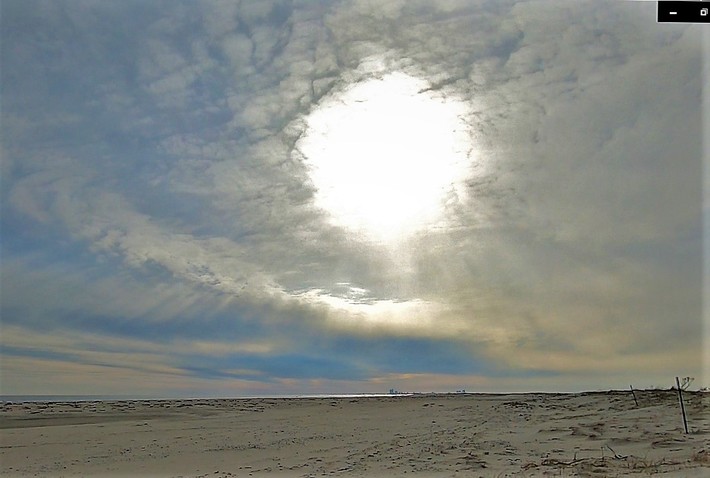 (A tough blog to write.)

Friday, August 16, 2019: Weather should be fine for fishing, though the torridness will make itself known, mainly a.m. on the Island.

Fluking will once again take the lead among targeted species. Further below, check out some of the larger bluefish showing bayside.

Surfcasting will be hampered by massive crowds – likely the largest weekend crowds we’ve ever seen now that there are so many beds – in larger houses built after Sandy, not to mention new hotels and townhouses, etc.

Be thankful for the wonderful upcoming weekend. That’s a segue into what follows.

TOUGH TIMES: This is going to be a blog weighed down by tragedy. But how can things like these be overlooked? They can’t Below you’ll get a feel for tough times for locals. Along with today’s ugly Suburban v. Pole accident, a tragic loss was added last night when the owner of Surf City Shore Fire Grills lost his life in a Rte. 72 wreck.

Here’s one of many condolences.  “The Members of Stafford Township Emergency Medical Services send their sincere condolences to the Kohlheim Family & Friends. RIP Tim.”

That crew responded to the accident on Route 72. Tim’s vehicle ran into the rear of a NJDOT truck placing out cones. Despite the rear of that truck being equipped with an impact attenuator – meant to reduce just such vehicular impacts – the hit was so server it was unsurvivable.

Darcy Joy Carbs writes, “Regardless of how well you knew Tim...he made an impact on you. He was a down to earth guy doing what he loved in addition to giving back to our community. He was one of us...and what hits home the most is this could've been anyone of us...driving home from work to see our family. That is what is so surreal. Prayers for Tim's family. I'm sure he's looking down and is smiling how people are coming together for his cherished family. So heartbreaking.” 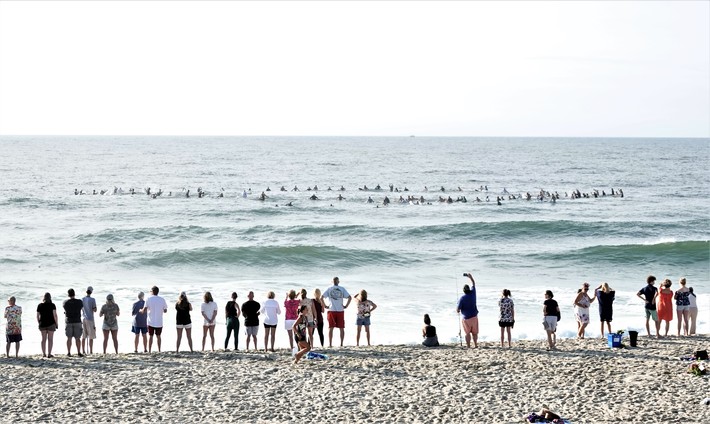 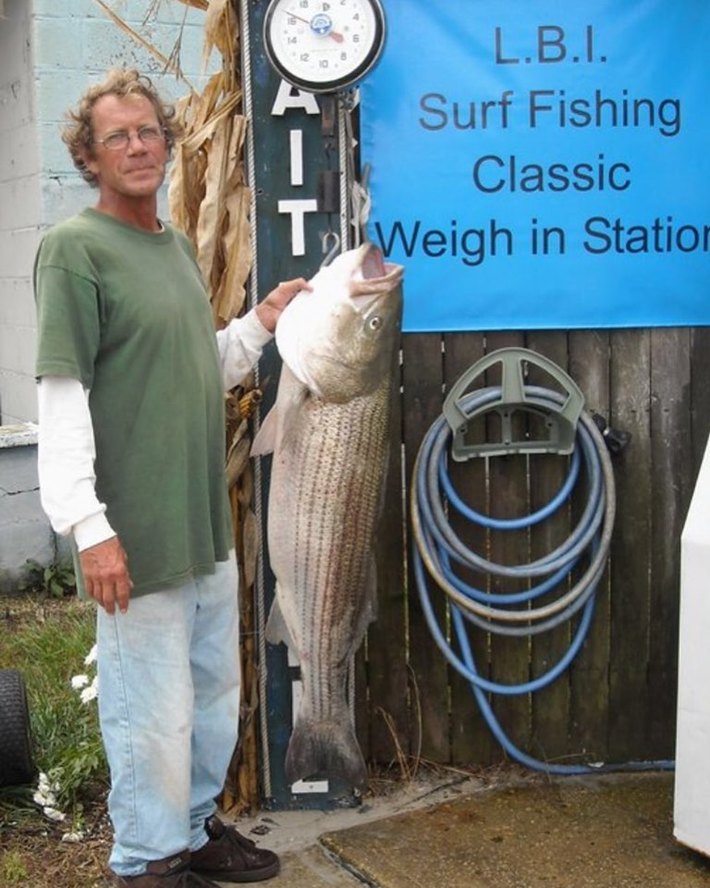 It was a worthy send-off for surfer/forecaster Kurt Horensky, who passed away last week at the far too young age of 59. The surfing side of his life represented amazingly well this morning with a memorial paddle-out off Holyoke Avenue, Kurt's favorite surf break -- and not far from his favorite surfcasting spot. Over 100 boards were present. I even brought a board but stayed beachbound, feeling the need to get photos to memorialize the memorial.

Now to the bad part:

The paddle-out, church mass and gathering at the Beach Haven and Marlin Tuna Club to remember Kurt Horensky added up to one of the Island’s finest and highly deserved tributes to an outstanding person, a longtime close friend to so many of us. As his brother said at the mass, Kurt would likely have been a bit embarrassed by being the center of such attention. Sorry, Kurt, but that heartfelt outpouring was simply how we feel about you, brother. I hate to be trite, but I have no doubt he as looking down … with that soothing smile of his.

It is now my unenviable duty to bring up what is likely the lone down point to such an amazing tribute.

Kurt’s family and friends were saddened that someone removed the small memorial anchor that was placed at the end of Holyoke Avenue just after his passing (see photos). It was meant to be there until the paddleout. I’m told the town had no trouble with it being placed there until today’s ceremony. It was going to be kept as an emotional reminder of this amazing time of reverence and respect to our fallen buddy.

Many of us had hoped that, just maybe, it would magically reappear, possibly at the church where mass was to be held. It didn’t. As of now, it seems it was stolen, maliciously. While another could be made, it just wouldn’t be the same. It’s time to reach out. Here’s hoping the power of social media – along with the far reach of Kurt’s ring of friends – can work to persuade whoever took it to return it to where it had been -- absolutely no questions ask.

If anyone has any information about the disappearance, please contact either captainbaugh@hotmail.com or jmann99@hotmail.com. 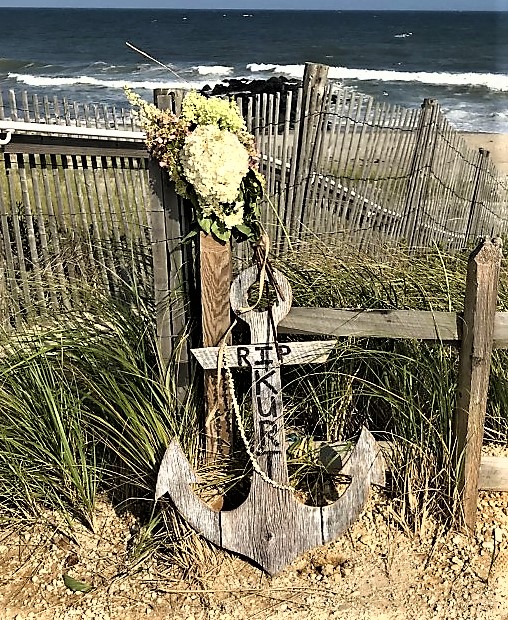 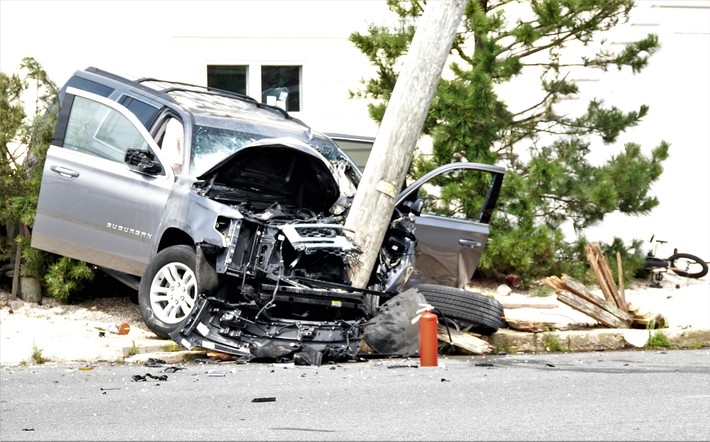 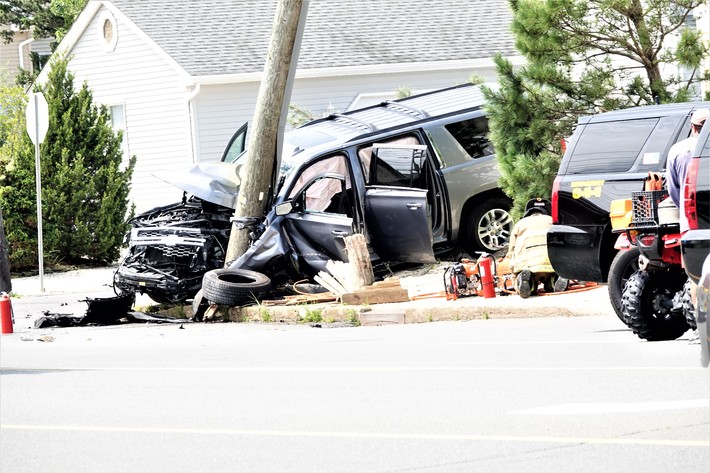 Today’s Boulevard accident – vehicle versus pole -- is as bad as I’ve ever seen on LBI, based on the damage suffered by a newer Chevy Suburban. It took place on the southbound lanes, a half mile north of the Acme. Electric service took a hit.

I got there after the fact but was listening to the account of an eyewitness, who was driving directly behind a female driver in the Suburban – with her two kids and the family dog in the backseat. The kids were apparently well buckled. I’ll let you know right now they were not hurt – and were resting inside a nearby house. The woman didn’t fare so well, but I was told she was conscious when eventually extricated by first responders using the Jaws of Life.

Running into folks involved with the aftermath of the wreck, I quickly realized things got downright dramatic, as in life-and-death dramatic.

The eyewitness said he was driving in the Boulevard’s left lane, southbound, when he “sensed” something in the right lane. That was a bit of an understatement since he sensed not only a passing black Chevy Suburban but one that was inexplicably accelerating. The female driver then swerved into the utility pole. “She just ran headlong into the pole,” he told an LBTPD officer, estimating she might have been going as fast as 60 mph. Be advised, that was his guess. He also told the police he felt the female driver may have been distracted or even experiencing a medical issue. Again, the was strictly his thoughts. There were no brake/skid marks on the roadway. The fact the utility pole was driven three feet south speaks volumes about the impact.

It was after the impact that the story gets downright heroic. The front of the Suburban burst into flames, trapping the woman inside. The eyewitness pulled over and ran back to begin trying to free her. At the same time, as many as three – possibly four -- other passersby came to help, one of them bringing a fire extinguisher.

The fellow with the extinguisher told me, “I was going to throw that thing (extinguisher) out of the back of my van a dozen times. It just kept rolling around.” As fate would have it, it was called into vital duty today. It was enough to knock down growing flames, offering some time for the gathered grassroots rescuers to offer aid and comfort to the trapped woman. The two children were pulled from the vehicle by one of the first arriving rescuers. I was told they were shaken but unharmed. Their bikes had been launched off the vehicle with such force that one of them had a bent front wheel. I got a chill seeing them lying there in a nearby yard.

But engine fires don’t go out easily. As the rescuers continued to be working on the trapped driver, flames began to reappear. Enter a Roto-Rooter man with a water hose. “That really put it out. I don’t know what would have happened if he hadn’t come,” said the rescuer who had used the extinguisher.

With the engine safely cooled, it was just a question waiting for the jaws of life. As usual, the responses from combined LBI first response forces were astounding. And they were needed, both for finalizing the rescue of the woman, administering first aid and to contend with a growingly dangerous traffic situation in the vicinity of the accident. The accident also had a more distant impact, knocking out Boulevard traffic signals from the Acme to North Beach Haven, creating a whole other degree of motoring madness.

I know some of you caught my mention of a dog. Talk about an odd repeat. The dog took off like a bolt, toward the beach – where it was struck by a car! Not to worry, damage was minimal and a family on the ocean road took it in, not knowing why it was on the run. With the help of lifeguards, one of whom came to the accident scene, the story behind the pet was realized and the guard said he’d handle getting the dog back home.

Update: Lifeguard was a vet and the dog was taken to an animal hospital.

The “dog” days of summer may have arrived at the New Jersey shore, but the captains of the Beach Haven Charter Fishing Association have been barking up the right trees as they continue to put good varieties of fish into the fish boxes.

The head boat “Miss Beach Haven” with Captain Frank Camarda has been seeing its number of keeper fluke increase on practically a daily basis. Flatties over three pounds have been common with several over 4-pounds including one that tipped the scales at 4.5-pounds. In addition, black sea bass in the 2-3-pound range have been showing up. Mate Max Rosenthal says the fishing has been so hectic at times he has trouble finding the time to send in his reports.

Captain Gary Dugan reports fluking on the “Irish Jig” has been “very good” with a nice mixed bag of fish. He says his local hotspots are producing very well, and practically every trip fish return to the dock for fish dinners.

The “Insatiable” with Captain John Lewis at the helm continues to find great variety for its anglers. Heading the list recently have been fluke and black sea bass, but also coming over the rails have been bluefish, Spanish mackerel, kingfish, and blowfish. Also helping to keep the poles bent are the ever-present smooth dogfish and sea robins.

Mate Marlyn Graham reports Captain Carl Sheppard has been finding loads of short fluke on recent trips for the “Starfish.” Keepers up to 20-inches have found their way into the fish box to keep some black sea bass and a minimum of 5 bluefish per day. Also making their appearance recently in the inlet have been some weakfish up to 15-inches with many others spike-sized being released. They have also seen blowfish, sundial, kingfish, Spanish mackerel, ling, eel, herring, and other assorted fish.

Captain Brett Taylor of Reel Reaction Sportfishing had a great trip in the fog yesterday. He had Pete Aubuchon and daughter Maria on a 4-hour charter. With cooler water they fished in the backwaters to box a limit of 6 fluke to 22-inches and finished off the day with a steady pick of blackfish to 18-inches in the inlet along with one triggerfish.

Additional information on the Beach Haven Charter Fishing Association can be obtained at www.BHCFA.net.

Dad and sons come in inquiring about fishing. Where to go, best thing to use. They just wanna catch fish. And I get this text. Fish on!
Mullet rigs and mullet. Harvey Cedars, Sunset Park.
White shirt: Alex, 11 yo.
Blue shirt: Noam, 16yo.
~Jerry