Friday, April 29, 2016: Hope you like rain – both in the form of passing showers and even steadier periods.

Yet another reason we celebrate mother's day ... and aunts rock, too.

Below: Freshly graduated from the Mozambique School of Mammalian Acting, Snyder just had to try out his play-dead routine, helped along by a fellow graduate, a cheetah named Chelsea.

Friday, April 29, 2016: Hope you like rain – both in the form of passing showers and even steadier periods. For four days to come, we’re in the drip zone. That said, I’m still sticking with that “lighter winds” forecast, even with the rains.

Below: I'm not advertising anything here, I just happen to like the stylin' trend of this line of rain wear:

Lighter onshores winds – with a lot of east and a touch of south to them -- should allow for fishing Barnegat Inlet, mainly from the community fishing wall and the New South Jetty.

For boaters, I think it’ll be an easy launch and inlet run for folks putting in at the Barnegat Light public dock.  Little Egg area closest to LBI should be an easy fish. Back in the day, I used to have good luck, right about now, jigging weakies in the channel just off Morrison’s. 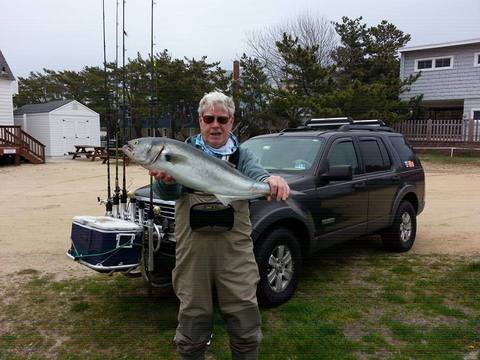 The surf should be decently fishy the entire weekend; here, too, rain gear needs to be close at hand. I’ll bet there are some cruiser cows in the suds. While I always say go big with plugging in spring, the biggest-assed lady bass will be scarfing up bunker chunks, fished off fish-finder rigs. Spring cows are very fast to drop anything that offers immediate resistance. I hate even suggesting it (since I’ve never had an ounce of luck going this route) but bunker heads fished off Rod #3 might not be such a bad throw-out. Definitely think circle hooks since you might be a goodly distance away from that bunker-head rod.

The chopper blues are still in the house but may have drifted a tad north. This doesn’t preclude another wave of migrators moving in at any time. There is also the likelihood of cocktails/tailors also showing, though last year the toothy predominance of choppers seemed to take a big bite out of presence of the smaller “eater” blues.

Below: Dinner being served www.edibleeastend.com 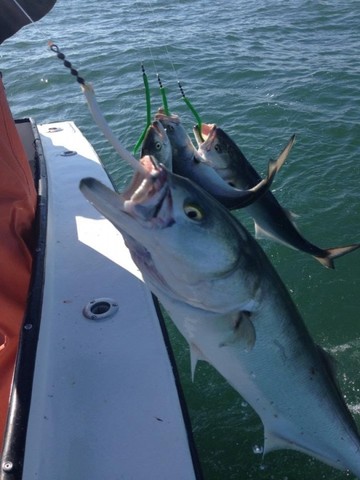 With the above photo in mind. Does anyone still fish for spring Boston mackerel???. 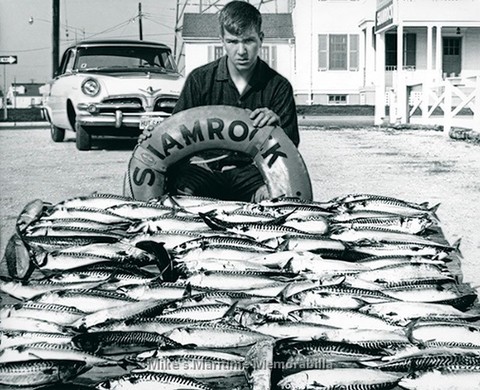 We are already booked tomorrow morning (Sat, April 30) so I am adding an afternoon trip to exploit the nicer weather day of the weekend. My morning trip will be returning at 11AM so we will be sailing Noon to 5PM Sat afternoon. Also Sunday, May 1, yes, even in the rain, ....put your "big boy" pants on, and slickers. By the looks of all this easterly wind, we are planning to fish in the bay for the next couple of days. The ocean forecast looks a little too rough, so I have a bushel of clams and a flat of sandworms on board to target Barnegat Bay stripers. The snotty weather could produce good inside action on the bass. We will also go on the hunt for the big blues with the topwater lures. Also sailing Monday, May 2 with the same game plan. $150 person, 3 people max, all fish are shared.

As soon as the ocean lays down we will start targeting the ocean run of big stripers, as well.

BRING OUT YOUR HISTORY: Deb at the Maritime Museum, Beach Haven, hopes to pull together a museum section depicting surf casting history.

Boy, does this strike the cool-cord with me, being a history nut and all. At the same time, I realize it could get kinda tricky gathering apropos surf fishing artifacts. While I’ve seen many an olden tackle box filled with goodies from grandpap’s days, I usually get priced out when trying to purchase same – meaning someone got those suckers. Hey, the stuff inside really should be seen by the public – in the case of the Maritime Museum display it would be strictly on a loan basis.

Jumping instantly to mind are photos. I have some goodies but I’ll bet some folks have old surfcasting shots that put mine to shame. LBI backgrounds add that local historic touch.

Below: Example shots, likely/surely not of LBI but offer the concept rather interestingly. 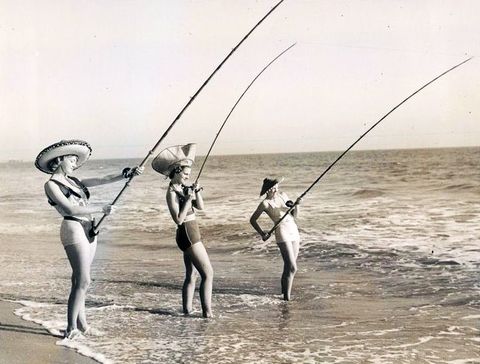 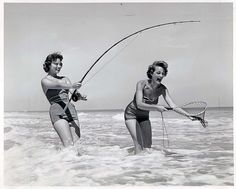 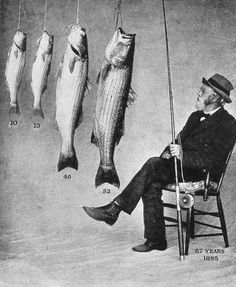 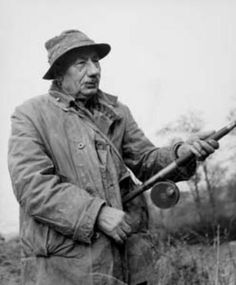 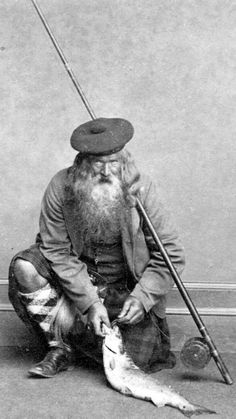 Despite my collecting obsession, it’s not like I’m loaded with old surfcasting stuff. I’ll note here that the ultimate artifacts for the museum's LBI-based display would have a local look and feel, though any item relating to old-time beach fishing would look great in a display.

One thing I do have is something apparently so common they’re in many a local garage: brass sand spikes. Still, some handmade sand spikes would display nicely, especially if they have some background -- like being made my great uncle Jed when he lived on Third Street. Better yet, imagine having photos of him holding the spike. While photos always rock, it’s those “hard” artifacts that mesmerize. That said, I’m not sure what those items might be. I kid you not. Oh, we have rods, reels, lures and sand spikes – and they’re needed for the display. I’m just struggling to think of some other historical surfcasting items that require a second, what-the-hell look. Strange is always cool. 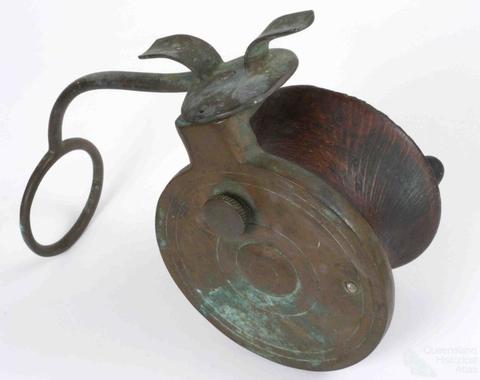 For my part, I have a few nice photos but I also have a collection of lead sinkers dating back to the 1700. While little has changed in the general shape of sinkers, one look at those from the 1800s and you can see the olden-ness. Also, lead sinkers take on a patina that can only be achieved after hanging around for a hundred years or more. The problem is I have no idea where I put them. In my situation, it's equivalent to probing around within a black hole. Still, while looking for the lead, I just might find some other old surfcasting artifacts I have tucked away.

Below: These are examples of old sinkers ... not mine. www.popscreen.com 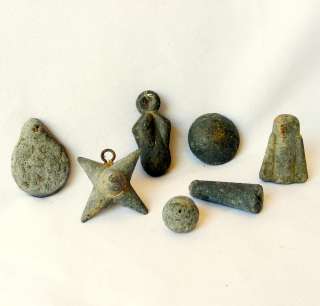 I’m sure  there are some other saltwater angling artifacts, not specifically for surfcasting, that might also kick-it when viewed by the public -- and a lot of public view the museum's stuff.