Friday, April 01, 2016: No sooner do I think it’s not so bad out there than there’s a crack of thunder and the skies open up. I’m probably among the minority who’ll say “Around here we like the rain.” In this instance, I’m talkin’ gardens and frogs.

I won’t go into that whole spiel about vernal/spring ponds -- and how they can make (when full) or break (when dry) the survival of many amphibians. While long and steady rains are the biggest impacts, even a downpour, like today, can fill the ponds – and in the case of wood frogs, the dirt road puddles. 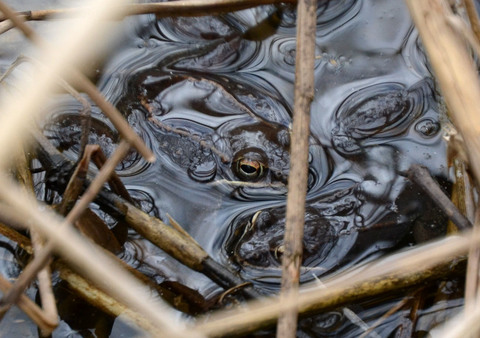 As to the gardens, I’m once again eyeing some unspring-like night temps for the upcoming week. Lows will toy with freezing along the coast. And, once again, they could drop into the cranberry-threatening 20s in the Pines.

(16/ P17) TRENTON - With temperatures in many parts of the state expected to approach freezing over the weekend into early next week, the Department of Environmental Protection and Department of Agriculture are working cooperatively to allow farmers to do controlled open burning or use specialized torches known as smudge pots to protect flowering crops from frost damage. I’m always amazed when the Lees tell me the low the temps got in their bogs over Chatsworth way -- though when I used to regularly camp out thereabouts (when the DeMarcos owned Chatsworth Lake) I’d often wake on spring nights with my sleeping bag sparkling with frost. No, I never used a tent – until I got smarter.

Holgate is closed. I’d bemoan that if I wasn’t so dang busy from now through August. Sure, I coulda gotten in another few south-end weeks but even over the last few weeks before closure I barely got down there. I’ll send out a touristy note reminding folks that even with the refuge closed, it’s a great look south from the parking lot. Also, there is a decent-sized section of beach just south of the parking area and north of the Refuge boundary. I don’t have to tell surfers about that famed Wooden Jetty beach. Just make sure to patronize the businesses down there – and show full respect to the locals, especially when parking. By the by, with all the erosion on the north part of the refuge, shorebirds can be bird-watched with scopes and binocs … just don’t go beyond the barrier. There is also refuge literature to be had – located in stands or handed out by volunteers.

The first reported weakfish of the 2016 season comes from somewhere behind Sea Isle City on a Mr.…

LIGHT UP THE NIGHT: Summer is out there somewhere – and, based on law of average, we’re due for a scorcher.

While night fishing via a Coleman’s glow was the way we once were, night sessions have exploded again, thanks to stellar shark fishing hereabouts.

Not that we dare to go out actually targeting sharks, since that is not legal in regards to most species. However, should a 150-pound sand tiger shark happens to suck in one’s fluke hook -- and chain leader --  well, that shark needs to be brought in for proper release … right?

Below: You're average nighttime fluke hook ... (In reality, suggested circle hook sizes for sharks range from 20/0 down to 8/0.) Below: Pat Arminas and Tyler Contento trying to determine if their New Jersey night catch is a fluke ... or perhaps something else. 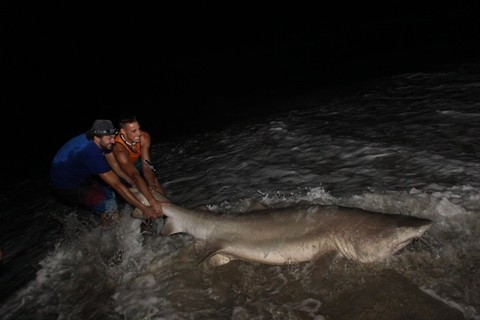 With night fishing making a big sandpaper-skin comeback, the need for night lights is meeting astounding advances in headlamps, of which I’ve becomes something of an expert – if based on nothing more than the fact I have no fewer than a dozen modern headlamps, despite hosting only one head.

One might say the reason I’m so well head-lit is my ongoing search for the perfect headlamp look, feel and brightness.

I recently got one that shoots forth a truly-blinding 3,000 lumens of light, able to stop a deerfish in its night tracks from over 100 feet away. It's mighty brilliant for a Chinese creation, costing $19.99 (see http://www.thesuccessfulfisherman.com/products/3000-lumens-led-head...). 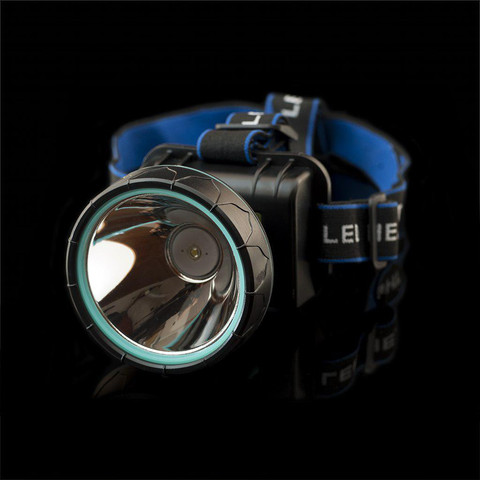 The headlamp purchasing problem I’ve found comes with lower-end models,  mainly the mass-produced ones that end up highly unimpressive in brightness and durability. In this day and age, LEDs and related bulbs have gone into some other dimension of excellence. The beams from modern headlamps/flashlights should astound.

Most headlamps now offer controllable brightnesses. This adjustability concept was developed specifically to help users preserve battery life; duller LED beams can carry on for hours. However, such beam adjustments play perfectly into the hands and eyes of night anglers. It’s been know, long and wide, that once you get your night vision on, you need to hold onto it. It can be lost in a flash. But even on the brightest of moonlit nights, there are those must-see matters of tying knots, baiting hooks, locating energy bars … all of which need subdued light. That’s where the lowest light output works to allow baiting while preserving night vision. For decades, all a headlamp offered was bare minimal lighting.  Now, night fishing has access to a headlamp glow that can light up the show -- and the entire beach if need be.

These days are long gone ... 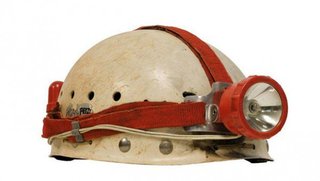 Having been a fanatic night angler for many years, I can’t count the number of fish I’ve lost in the swash because I couldn’t see what last-minute tricks and moves a clever night fish was dishing out as a last-ditch effort.

The next time you have a daylight surf fish on, take note of how intense the visual aspect gets when you get the fish into the shorebreak. Along with needing to keep an eagle eye on the line, you often need to go almost eye-to-eye with the quarry. Enter the killer high-beams of today’s lights, some throwing out over 1000 lumens for long periods of battery time. 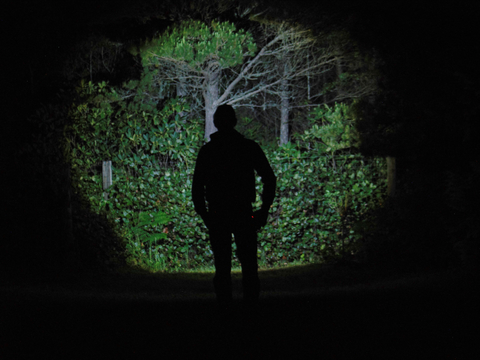 Below: And some are maybe a tad much ... I have one of these, also. 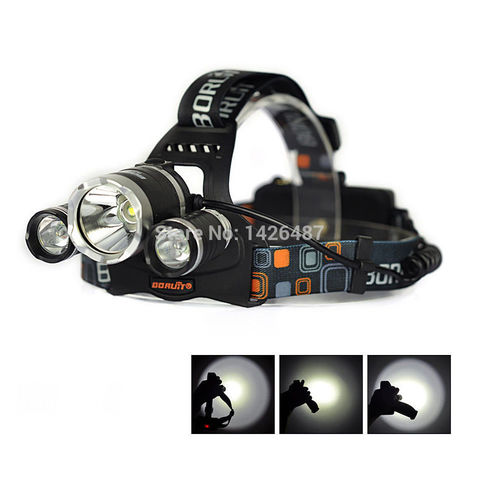 A modern headlamp can quickly be high-beamed – and even wide-beamed -- onto the watery area where you’re fighting a near-in fish. It's actually a quite-cool look -- seeing a beam reflecting off the shiny likes of a big-ass bass, as it side-bodies in the shorebreak. What’s more, if you’re near a jetty or structure, you can shoot a focused beam over to check how far you are from a potential fight-ruining rock or dock. Yes, there is also an ability to see the damn fish just came off on the wet sand.

My favorite headlamp to date is a prohibitively expensive Petzl Ultra Rush; E52H. I got one free for testing. Hey, it’s good being an outdoors writer. I can sing its high praises. Decked out (with special batteries) it lists at $429.95 … and you won’t find one of these selling for less than $350. Be careful if the price is much lower. It could be a lesser model. 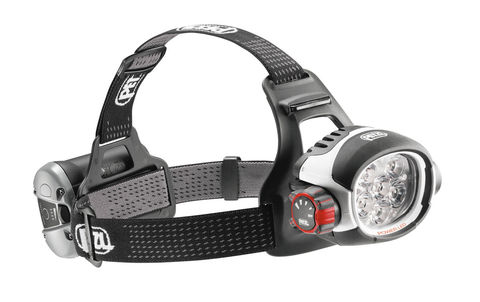 Being true to my benefactors, I’d readily argue that Petzl is the headlamp name to look for, though they now offer some lower-end models that can’t hold a candle to their upper-end lamps.

However, to get a very decent read – and I read about headlamps and flashlights – below is a headlamp-rating article that emphasizes getting the best light-bang for the buck. You’ll like the low price of its top-rated picks. To pick the pick of the crop, the Outdoor Gear Lab “took 28 top headlamps and put them through a gauntlet of side-by-side tests,” per its website.

This story provides information on striper surf plugs that were used during the heyday of striper surf fishing in the Northeast. Striper surf fishing hit its peak from the mid-seventies to the mid-eighties, which is about how long these plugs have been in storage. Many of these plugs are over twenty-five years old. Most are no longer made. This is a collection of plugs that you cannot normally buy off a tackle shop wall any more. I have guarded these closely, but feel it's time to open the treasure chest, the spoils of saltwater campaigns, and share the booty with other surf anglers and plug collectors who may appreciate hearing about some of these legacies, thereby keeping the fascination of surf lore and surf lure collecting alive and handed down from generation to generation.

This is now way too easy to do:

Create unique montages from your photos

✂ Do it like the glossy magazines. Discover the "digital scissors" for your photos. The press says: "Very good!"✔ CLICK HERE →