Below: This photo got slammed as being photo-shopped. But you might want to have a look at a dang-similar shot with a larger vista. "That photo is impossible! ... OK, so maybe whales do surf waves." 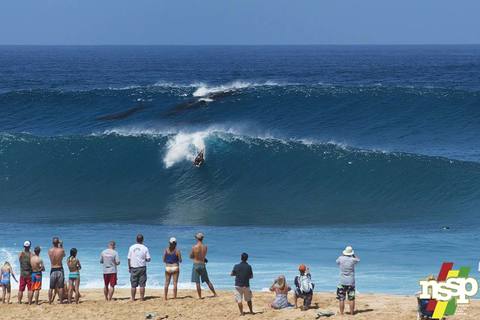 Saturday, December 26, 2015: A belated Merry Christmas but I’m still ahead of the game on a Happy New Year. I might even be ahead of Michael at the BH Terrace Wawa.

Weather note of interest. LBI’s Christmas Day thunderstorm kicked the weather service lightning-strike counter into high gear. Yes, there is such a thing as a lighting counter. I asked Santa for one but he got into the naughty/nice thing and had the cusses in my fishing columns circles in a hue known as “truly-naughty crimson.” The unblinking lightning counter tallied one dozen cloud-to-ground strikes in under 30 minutes, hitting either on or bear LBI. That has to be some local Christmas Day record, thinking in whiteman time.

I got spooked by one of those flash-boom hits, meaning it was so near there was no separation twixt lightning and accompanying sound effects. Wonder what the wise men would have thought about such a sky showing?

I should also note – and rub it into snow-lovers -- that some areas got well over two inches of rain between Christmas Eve and Christmas day. One report had over two inches in just a couple hours. Oh, I better get to the rub-in-in part. In a cold year, those couple inches would have amounted to 20 inches of snow. Again, some places would have gotten 20 inches in two hours. Of course, the precip came via a moisture train from the Deep South, which means warm Gulf air was in play.

This coming week – and possibly beyond – has wetness written all over it. Absolutely none of it will be white hereabouts. As previously noted, folks just north of us will have one quick shot at whiteness, before things clear out and we see an arriving week of 50-degree temps, clear into next weekend, though rain in varying amounts will punctuate what is a vacation week for many.

Oh, yes, it has rained, oft heavily, every day I’ve had off so far. Yesterday, late-day, I got into the woods for maybe a single dry hour and the sky absolutely opened up, almost antagonistically. I did manage to get in a half mile run … back to my truck.

WHAT’S COMING, SKY-WISE: For those who follow truly guess-acious long-term forecasting, I crunched (meaning conjectured) future jet stream patterns and, short of possible post-cold front Canadian air masses (not polar vortexes), we’ll be staying within one of the straightest west-to-east jets … ever.

At the same time, more future-gazing computer maps are showing el Nino hell finally breaking loose along the Pacific seaboard. On the Left Coast, the table is set, historically speaking (purely), for epic coastal storms. As I’ve blogged, this Nino has become so large and unique that whatever it does will create a standard/precedent for any other similar oscillations in the future. That translates into being unable to second-guess what it will do this exact go’round.

One other issue is the torrential rains not that far to our south and southwest. If those soakings were to continue throughout the winter, there are parts of some states that’ll be all but floating away. Interestingly, currently, the hardest hit areas are non-coastal, i.e. where coastal abandonists are suggesting we should retreat to avoid, uh, flooding. WHITE OUT WEST: Snow? I repeat: Go West, young man. Wait until you see what awaits you this winter and spring. Just don’t forget your snow avalanche survival vest. For those of you unfamiliar with this now ubiquitous extreme skiing devise, here’s the patent language offered by inventor Carl Hodel: “…a vest to be worn around the chest by skiers, and mountaineers. It is designed to provide oxygen to breath and to serve as a flotation device to help victims survive if caught in an avalanche. The vest has a CO2 absorber chamber, a mouthpiece breathing hose, and a compressed oxygen cartridge which can be released instantly by biting hard on the mouthpiece hose or pushing a button on the mouthpiece hose. The vest has external air ports in the mouthpiece hose which allow breathing of external air until the O2 cartridge is activated. Bite or pushbutton activation of the vest also seals the external air ports instantly. Thus, the victim of an avalanche can breath oxygen while trapped under the snow and greatly increase his available rescue time.”Sure there are hurdles in perfecting such a device, like making sure a wearer has the underwater wherewithal to get a breathing tube in-mouth, while coping with enough wave power to rip you limb from limb. But, as noted, it’s more often the follow-up waves that kill. Since a waverider is farther inside for those battering follow-up waves, activating a breathing devise is more doable. 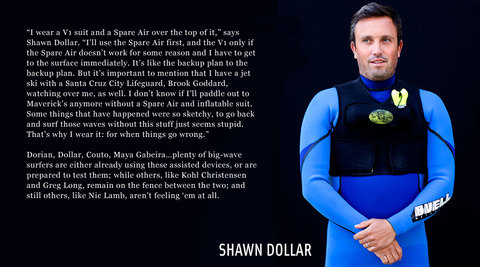 The military and some beyond-extreme waveriders, like Laird Hamilton, are still actively perfecting just such surfing devices. Many are being marketed. I see them as soon being part of beach patrols and water emergency response teams.

Merry Christmas from the Jersey Shore 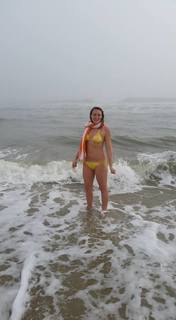