Looks like someone finally scored a meteorite shower, last night: "If you have a chance.....I went outside to walk the dog, saw an awesome long burning shooting star, as i looked up to the east they were dropping all over from south to north, must of saw 100 of them in 15 mins. PRETTY FRICKING COOL, i had enough wishes to last a life time. You should really go look NOW if you have a chance. ..."

Fisheries regulators vote Friday on whether to cut the size of the legal catch of the environmentally important menhaden, an oily fish prized for use in dietary supplements, cosmetics and animal feed.

The vote is a key milestone in the decades-old battle over the fish that scientists say are a key food source for larger species and a filter feeder that improve water quality in areas such as the Chesapeake Bay.

However, any cuts would affect an Omega Protein processing plant in Reedville, Va., which lands about 80 percent of the catch along the Atlantic coast and employs about 300. The harvest of the small fish makes Reedville the No. 2 fishing port in the U.S. based on total catch weight.

The Atlantic States Marine Fisheries Commission planned to vote on how much to cut the harvest and how to allocate the remaining catch. The options facing the 15-state commission range from the status quo to cutting the current harvest in half and would take effect for the upcoming season.

Jay Odell, the Mid-Atlantic director for the Nature Conservancy, said managing a fishery the size of the menhaden fishery without harvest limits is unusual.

Omega spokesman Ben Landry said the company has concerns about the science behind the stock assessments, but is willing to take a 10-percent harvest cut.

"That would allow us to remain a viable business and keep our workforce whole until the next assessment can be conducted," Landry said.

Terry Cummings, manager of advocacy and outreach for the Chesapeake Bay Foundation's Maryland office, said at a public hearing on the proposed cuts in November that the menhaden population is 8 percent of what it would be without fishing and the best available science shows the population is at its lowest recorded level. The foundation is calling for a 25-percent overall cut.

Cummings said strong menhaden stocks will mean more high-quality food for fish, birds and marine mammals that depend on menhaden "and more jobs for those employed by the various commercial charter and recreational fisheries that harvest or depend on menhaden."

(Louis Silvestro is president and Adam Holbrook is plant manager of Channel Fish Co. of Boston.)

Mr. Baker cites a 'recent study of 'forage fish' such as menhaden' to support his argument that a 50 percent reduction in menhaden harvest is necessary. Mr. Baker doesn't tell readers that the study's sponsor, the Lenfest Ocean Program, is managed by Pew.

Mr. Baker cites 'a letter signed by 94 leading scientists' to the Atlantic States Marine Fisheries Commission (ASMFC) saying current measures are inadequate. Mr. Baker doesn't tell readers that at least 31 of the signers are affiliated with or are part of organizations receiving funding from Pew Environment. Few of the signers have direct experience working on menhaden issues. One of them is an English professor, not a scientist.

Mr. Baker states that last year 'more than 90,000 people '' urged the ASMFC to protect menhaden.' What he doesn't say is that response was generated by Pew-organized online campaigns — in partnership with Greenpeace and other groups — using alarmist and sensationalized headlines that selectively presented facts.

In Mr. Baker's op-ed, all arguments for severe regulation lead back to Pew-managed, Pew-organized or Pew-funded efforts. In the lobbying and public relations world, this type of manufactured grass-roots support is known as 'astroturf.'

Let's look at Mr. Baker's approach to science and evidence not generated through Pew channels.

Mr. Baker underplays the concerns of the ASMFC Menhaden Technical Committee when he writes of 'some degree of uncertainty' present in current estimates. The most recent menhaden assessment, conducted in 2012, concludes that problems with the assessment model 'cast considerable doubt on the accuracy of the estimates from this update stock assessment.'

In Mr. Baker's opinion, 'sound science' reveals that the population is overfished in terms of the 'new mortality threshold.' The proposed threshold which Mr. Baker references cannot be considered the 'most recent science' as it has not yet been agreed upon, finalized, voted on or implemented. If the new mortality threshold is adopted, it will result in more conservative limits in the future. But Mr. Baker is applying proposed future limits to old data. It's like lowering the speed limit and presenting drivers with 50 years of retroactive speeding tickets.

Mr. Baker says we present a 'false choice' between protecting menhaden and jobs. He argues that when science is uncertain, regulators should set 'stricter catch limits' because 'fishermen will benefit' in the long run. We've heard this before, but promises of a brighter tomorrow based on cuts today rarely, if ever, come true. Severe cuts in catch limits — often based on questionable science with high uncertainty buffers — have not resulted in the promised higher limits. The imposition of catch shares in New England promised fishermen a 'secure share' of a rebounding catch. What they got instead was a minuscule share of ever-declining quotas, and industry consolidation that is putting small operators out of business.

There is a pattern here. Environmentalists, drawing their paychecks from tax-deductible foundations, stay employed, while tax-paying fishermen lose their jobs and businesses. Perhaps that is why the menhaden bait and reduction companies, the United Food and Commercial Workers Union and the NAACP are united in asking the ASMFC to ignore the extremists and instead adopt policies that will protect both jobs and the resource.
((((((((((((((((((((((((((((()))))))))))))))))))))))))))

P.E.I. fishermen are confident the federal Department of Fisheries and Oceans won't agree to list Atlantic bluefin tuna as endangered, even though a committee of Canadian scientists wants to see the fishery suspended.

The Committee on the Status of Endangered Wildlife in Canada is calling for the tuna fishery to end under Canada's Species at Risk Act.

The deadline for public comment to DFO is today. The federal Minister of Fisheries is expected to make a decision about the fishery sometime in the new year.

But one P.E.I.'s 360 tuna fishermen, Kenny Drake says, these days, there is so much tuna around, fishermen are almost guaranteed to catch one their first day.

"So can you compare that with where I used to fish for all summer for three fish?" said Drake

"If we started seeing the numbers dropping off or something here, then I might want to take a stronger look at it. But the catch seems to be increasing," MacKinley said.

But just because P.E.I. fishermen say they're seeing more tuna doesn't mean the overall population is healthy, said marine biologist Alan Sinclair, co-chair of the COSEWIC marine fish subcommittee, which is urging these fish be protected.

"I think what's being seen locally off North Lake, it could well be that's where the last tuna is going to show up," Sinclair said.

That's why he and the other committee members want the tuna on the endangered species list.

If fishing continues at current levels, Sinclair believes bluefin on this side of the Atlantic will be gone in 100 years.

"In my mind it would be a shame to ignore that and let them go extinct. It doesn't seem right to me."

Bluefin tuna is one of the most highly sought-after fish species in the world with buyers from Japan and the U.S. paying thousands of dollars per fish.

A report launched today by WWF shows that over the past nine years fisheries ministers have set fishing quotas on average 45% higher than the recommended scientific advice. This means that ministers have approved fishing of 6.2 million extra tons of fish.

WWF’s analysis – developed ahead of the PECH committee (the specialist committee on fisheries in the European Parliament) vote taking place on the 18 December as part of the EU fisheries reform process currently in progress – paints a worrying picture of legalised overfishing by EU governments.

“The European Parliament needs to see what a bad job fisheries ministers have been doing over the past decade. One extraordinary example of this is a deviation of 264% above scientific advice for Sole in 2008! MEPs now have a unique opportunity and the power to right a wrong and the answer is simple – listen to science and let fish stocks recover,” says Tony Long, Director of WWF’s European Policy Office.

To add to the problem of not following scientific advice, the setting of quotas does not include the quantity of fish that is thrown overboard and wasted and not registered as catch. For example between 2003 and 2005, fishing of North Sea cod alone resulted in 18,000 tons of fish being discarded.

In Europe almost half the stocks in the northeast Atlantic are overfished and in the Mediterranean this figure is as high as 80%. EU fishing fleets have been plundering European waters for too long, resulting in two-thirds of assessed fish stocks being overfished in total. Continuing this way will prove devastating not only to Europe’s fish stocks but also to the fishing industry in the long-term, where we will see a decline in profits and income for fishermen, unless the upcoming EU fisheries reform ensures that fish stocks are recovered and managed at sustainable levels.

“To add insult to injury, by disregarding scientific advice, fisheries ministers are effectively not only making decisions that are depleting a ‘public good’ such as fish, but they are also wasting fish through discarding and wasting EU citizens’ money. Between 2003 and 2012, the European Union paid around €7.5 million to ICES for a scientific service which the fisheries ministers are simply not taking into account when making their decisions. Something has got to change,” continues Mr Long.

Positive trends in fish stocks recovering have been seen in recent years, however all too often they are an exception rather than a rule. The current situation needs to be reversed and legal overfishing needs to be stopped – fish stocks will only be able to recover when the right political decisions are made which follow scientific advice.

A stocking stuffer suggestion: Amazon has them the cheapest. Just cut and paste this info: Smittybilt 2723 Tire Deflator Universal 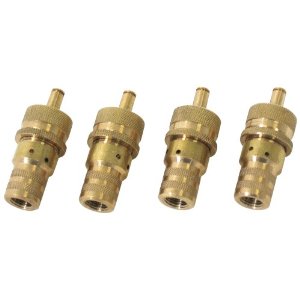