Not many people get thrown out of bowling alleys on their ear, but there's always one ...

Bluefish alert: A new wave of blues is pushing along the LBI beachfront, south to north. High intensity hooking, both bait and artificials.

Wednesday, May 24, 2017: What a day a difference makes … and versa vice.  The south end beaches exploded with blues in the two- to five-pound range. Per Kurt H. you couldn’t get past the blues to seek our bass. The choppers were even chopping up bunker heads. “The minute bait hit the water a blue was on,” is how Kurt put it.

Then there’s the highly weighty matter of a 57-pound striper taken in mid-Island surf. That’s not a typo … fifty-seven pounds. It was weighed in at Fisherman’s HDQ but I can’t find the info on their new-look website.

A bass that size is far from rare this time of year. I say that after running the Spring Simply Bassin’ event for years and being proud that the biggest bass of the year – outdoing even the fall Classic – showed in May and June. However, finding rhyme or reason to a spring bite is a bitch. The fish are rogues, as is the case with all trophy stripers, and can pop up on any beach at any time. I might give an edge to the north end – and if you recall The Mast, thereabouts – but mid-Island, Brant Beach-ish was a hot spot prior to the replen. In fact, the replen sands add even a greater variability to where big-ass bass might show.

Might this churned up ocean be limiting the formation of bunker balls off the beach, while urging bass into the suds? A nice notion for surfcasters, though this just pro report just came in from:

The big bass are here. The fish are on the bunker pods for the early morning bite and then the mid day troll gets them out in the deep. We bring it all and change up techniques as conditions dictate. The fish are all big, 25 to 40 plus pound bass. These are the biggest stripers of the season and the bite is in full swing. The bluefish are still in the inlet and bay to complement the action, as well. They are anywhere from 2 to 16 pounds and they are blasting our topwater lures.

$175 person, 4 people max, all fish are shared, everything is provided. You can call right up until "Go time" to see if there's room. Call to reserve a spot.

Walt Dudley from Bayville with a 54# 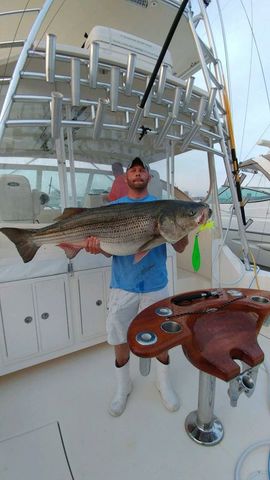 A lot of questions regarding NJ's start of the 2017 fluke season on Thursday, the ASMFC asking the Secretary of Commerce to find the state out of compliance (the bureaucratic equivalent of telling your parents that your little brother just hit you), and thus far the chirping crickets from the Commerce Department – well this just in from NJDEP spokesman Chip Diller, “remain calm, all is well,” the fluke season kicks off on Thursday….

ATTENTION OFFSHORE-QUALIFIED  MATES: Capt. Lindsay Fuller of the vessel June Bug is looking for a canyon-trip mate for a June 16th trip. If you're trained, contact him by going to http://www.fish-junebug.com or give him a ring at 609-685-2839. The Wareham Harbormaster Department alerted the Massachusetts Environmental Police to the two boats on Sunday at the Tempest Knob Public boat ramp.

When officers inspected the first boat, which had four people aboard, they found multiple coolers that contained 225 more black sea bass than the recreational limit allows, Environmental Police said. Fifty-nine of those fish were smaller than the 15-inch limit.

The black sea bass fishing season is from May 20 to Aug. 29. The limit is five of the fish, which have to be at least 15 inches, according to Environmental Police.

That boat also had 98 more scup than legal possession limit, as well as two undersized tautog and one 17-inch striped bass. All four people have been summonsed to appear in Wareham District Court.

Inside the second boat, which was at the courtesy dock, the driver dumped all the contents of a cooler into the water when officers requested to see inside. Officers were able to recover most of the fish that fell out of the cooler.

That boat had 68 more black sea bass than the recreational limit and 17 of them were undersized, Environmental Police said. Some of the fish were hidden on the boat.

That operator was arrested and his boat was towed to a holding facility.

None of the fishermen were identified in a statement from Environmental Police.

Because the fish were not on ice, they could not be let back into the water. The fish are being donated to the Buzzards Bay National Marine Life Center to be fed to recovering marine mammals, Environmental Police said.

9 Unwritten Rules of Fishing on Another Person’s Boat

#1 – Do not bring bananas on the boat

Let’s repeat that, do not bring bananas on the boat, ever! While this may seem silly to some, it is widely considered the worst thing anyone can bring aboard a boat. Bananas are said to bring misfortune and bad luck. Regardless of whether you believe in superstitions or not, respect the boat and bring an apple instead.

This should be a “no-brainer,” but always offer the captain some form of compensation for their troubles. Whether it’s paying for gas or bringing the drinks and food, this will give you a better shot at getting a second invite.

This ties in with compensating the captain, but make sure you offer to pick up bait for your trip. If you know what bait you need and the captain says not to worry about it, buy some anyway as a backup in case you run out.

If this is your first time going on a boat or you know you might get sick, do everyone a favor and prepare beforehand. Whether you need to take Dramamine or eat hours before you go, don’t cut the day short for everyone else or make it a miserable trip for yourself by getting sick.

If there is garbage on the floor, find a bag and clean up. Offer to help put the boat away to make it go faster. Don’t be the person that just says “thanks” and leaves.

The captain is most likely taking you to his spot and using his gear. Whether it’s running a trolling program, dropping anchor or just asking the captain what he needs from you, this will speed up the process and put fish in the boat faster.

This is a big one for a lot of people, but keep your ears and eyes open. Make sure it sticks when the captain teaches or tells you something new. You are the copilot, so keep your eyes open for floating debris and anything else that could ruin an otherwise great day.

#8 – The captain is always right

The only reason this would not be true is if they put you in danger. When it comes to the fishing and layout, follow what the captain says. It’s their boat and that gives them the power. If you have a disagreement, talk about it when you’re on dry land.

No one wants to fish with the sad guy or be stuck on a boat with him. Everyone is there to enjoy a day of fishing, so stay happy! (How could you not?)