Below you'll see a CPO bust of a trapper ...

Thursday, March 05, 2020: No better way to avoid COVID-19 than going out fishing. I promise I’m not frivolizing this hideous and high-impact disease.

If you think it’s already impacting our American lifestyle by sparking facemask sales and prohibiting handshakes at church, just wait to see the trickledown life-altering effects in weeks and months to come. If/when home schooling becomes mandatory, working parents who rely on their kids being in school during the day could be hit bitterly hard.

Returning to the concept of fishing as a COVID-19 preventative, I’ve read that being outdoors not only minimizes exposure to the airborne illnesses that luxuriate in crowded areas, but being outside in natural areas boosts the body’s immune system – sometimes as much as two fold.

With that up-point in mind, we of a tourist region ilk will have out hands full as people converge here from all angles, including the sea. Our marinas and improvised bayside docking areas, like Myers Hole, bring visitors in via the water. Face it, by summer, there is a high likelihood that COVID-19 will reach here. Whether or not it manifests, i.e. whether infected folks over-mingle will depend on precautions aplenty.

As I ponder what might be called infection points, I have to think about bars with loud bands. Huh?! At a honkin' bar, how do you communicate with everyone -- from friends to new-meets to bartenders? You get within inches to yell – as spittle goes a flyin’. When you get a sloppy drunk yelling who-knows-what for half an hour, you almost need a face towel to dry off.

Then there are buffets and other shovel-your-own salad bars. Sure, by law those self-service layouts have shields, but one has to wonder just how effective they are when your placing health and welfare on the line. Contagion can be very crafty – and adroit.

Re-relating to that schooling angle, kids are already Typhoid Marys. By adding a new typhoid to their bring-home capacity just about assures this ugly sickness can become a family affair. When schools are out for the summer and it’s off to the shore they go – possibly being asymptomatic carriers – it comes down to staunch precautions on the part of we Island regulars. Fun can still be had but some safeguards must be applied – like never before.

I see weird things. For doubly weird instance, just this week prominent doctors, in an effort to explain proper handwashing protocols forwarded the timing advice: “Wash your hands for the time it takes to sing Happy Birthday to you” … twice.

“Happy Birthday to you,

Happy Birthday to you,

Happy birthday to you.”

Instead of singing it a second time, you can follow-up with:

“For it’s a jolly good virus,

For it’s a jolly good virus,

For it’s a jolly good virus …

Which nobody can deny.”

For all you germophobes, already intensely attuned to the handwashing process, I suggest washing your hands for the time it takes to sing “Bohemian Rhapsody” … twice. Even more apropos, lather up while singing, “Stairway to Heaven.”

In an odd conviction to the relatively absurd notion that the new strain of Corona Virus was loosed by folks eating bats in China, that communist government just banned the eating of any wild animals. Communist countries can do stuff like that, though I’m betting the farm that bat eaters won’t be overly obedient, likely highly agitated with the rush from the fresh bat blood they’ve consumed – coupled with an overriding desire to dash about catching insects in their armpits.

FISHINGNESS: There are bass being taken in the surf in NJ, though nothing of note here on LBI. The unwintery winter might mean an early bass bite along LBI beaches, though likely not quite this early. Nonetheless, it’s well worth putting in some surfcasting time. If going with jigging plastics, fake eels are a spring thing. They must be swum deeply. Early season, my dad used to go with rigged eels on squid tins (spoons) much to the non-merriment of my mom, since they would be stored in the fridge.

Already the bigger angling question seems to be when – and if – the bluefish will show. Despite the mild winter, it now looks like we’ll get an icy rainfall by next week. That runoff will drop bay temps to near winter averages, making it far too cold for migrating blues. I’m watching OBX tackle shops to get any word of blues in the sounds. Nada to date. Obviously still way early. I’ll also point out that many arriving blues come out of the blue – arriving from who-knows-where. When tracking in from the east, there’s no early signs of their approach, short of commercialites starting to catch them.

Below you'll see a CPO bust of a trapper doing just about everything illegally possible when setting snares. The second sentence might be a tad confusing. The hunter did not have to be rescued he was just understandably pissed off at getting snared. I can relate. When I first began doing blogs I wrote about an infuriating "entanglement" I fell prey to. I was pissed beyond belief since it was set right where tons of kids fish and just as many hikers pass. I couldn't loosen it from around mt pant leg and had to go back to my truck to get tools to free myself. Had there been any ID tags on that "cable restraint" I swear it would not have ended well for the trapper. There was nothing but the snare. Out of all means of culling wildlife for the betterment of the entire ecosystem, I draw the line at trapping despite having had some amicable discussions with local trappers. I accept it but hate the method to hell and back. In the name of full disclosure, I was invited go a meeting related to the Pinelands and apparently said some things unacceptable to trappers -- without fully realizing no less. That ended VERY badly with some feeble punches being thrown my way and cops stepping in as my patience ran dry. No arrests but those trappers weren't up for amicability. That incident took pale at Stockton. Maybe some folks reading this were there and saw the post-meeting brouhaha.

CPO Faith received a call from a hunter scouting Higbee Beach WMA in Lower Twp., Cape May County. The hunter stated that he was entangled in a live cable restraint. At this time Higbee Beach WMA was closed to hunting and trapping. CPO Faith contacted CPO Tomlin for assistance and conducted a foot patrol locating five live cable restraints in a wetland area. Three were specifically set on otter slides over the edge of the water. CPO Tomlin located an additional three cable restraints in a known coyote trapping area. Several of the restraints were not tagged with an ID number and two did not have proper deer stops. CPO Faith contacted the trapper who denied setting for otters and was just trying to catch racoons or "whatever catches". The trapper had applied for the otter lottery but did not have any permits and the season was not currently open for beaver or otter. CPO Faith issued eight summonses for attempting to trap otter in a closed season, attempt to trap otter without permit, trap Higbee Beach WMA during closed dates, fail to attach ID, no deer stop on trap and improper use of bait.

Gloria MyPhung is with Olivia Peiffer.

Late Post: I love to take mini vacay and explore what local area has to offered and you can’t go wrong with seafood. I did my research beforehand and read all the reviews and I end up choosing this restaurant (LP Steamers in Maryland). I was expecting the crabs to be alive and cooked to order but it was not....slightly disappointed. 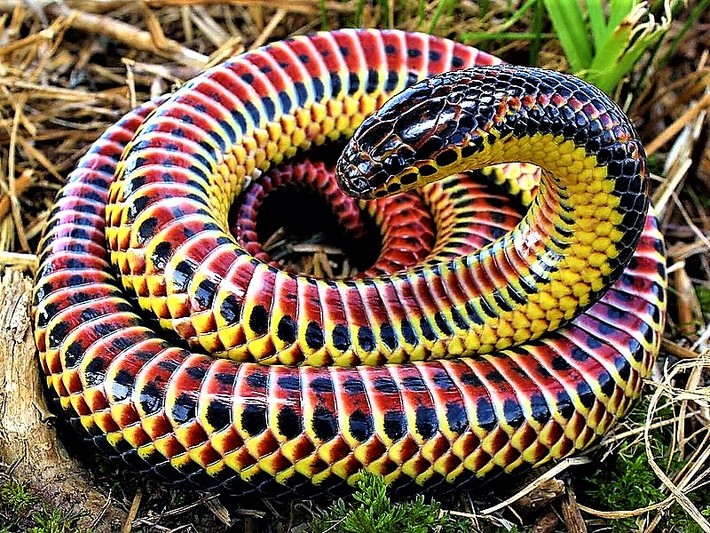 A woman in Florida had a once-in-a-lifetime experience when she encountered a rainbow snake. The rare, shy snake has not been seen in the wild since 1969 and many experts believed it was extinct.

ONE OF NATURE’S RARE JEWELS

Sometimes called an eel moccasin because it feeds on eels, the rainbow snake gets its name from its vividly colored scales. It stands out for the dark red stripes on its back.

These bright beauties are harmless to humans and more afraid of us than we are of them.

THE RAINBOW SNAKE IS SHY AND HARMLESS

The Florida woman spotted it while she was hiking in the Ocala National Forest. According to the Florida Fish and Wildlife Research Institute, rainbow snakes spend their lives hidden under floating grass, water plants and Spanish moss. They rarely venture out in daylight, and it’s rare to see them anywhere close to human activity.

Experts at the Florida Zoo say rainbow snakes are harmless. They don’t have any venom, and they have no way to defend themselves if you capture them.

This is my fantasy: I can once again venture out into the New England woods without tucking my pants into white socks, without spraying my shoes with insect repellent, without fear.

It can only be realized when we have fully effective protection against Lyme disease, so I'm closely following the progress of Massachusetts researchers who are developing an anti-Lyme injection meant to last several months, long enough to get through tick season.