Ted M. says it all: "18" fluke from the surf this morning..will be a great "shore" lunch..caught tons of kings and spots as well..beautiful morning !!!!!"

Thursday, August 30, 2012: Another rub-in day. As gorgeous as it is, a day like this has to make leaving so much harder for the masses heading home this weekend. I’ve heard an unusually large number of: “We probably won’t be back for a few weeks.” That likely has to do with kids back in school and also a goodly amount of make-up work for those taking a four-day weekend, starting late today.

The wind situation is a bit iffy. I’m hearing “gusts up to 20 knots,” though Saturday’s lighter variable winds are looking good. Overall, there should be large chunks of fishable conditions, though surf fishing will be clogged by huge numbers of beachgoers, make it early. 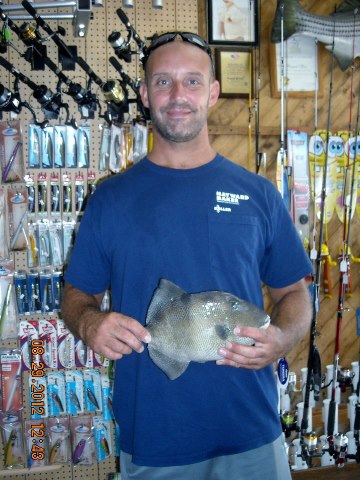 Mike said he is glad they lowered the limit. Nice day for him but he had to move around on Little Egg Reef to get his 5 keepers. Minnow/ squid combo or at times he used chartreuse gulp swim mullet.

Down below you’ll see the ongoing griping about the insane increase in harbor seals off New England.

I offer these updates because that population explosion can often blubber down our way.

Chatting with Sheila D. over at the Marine Mammal Stranding Center, she said that the amount of seal action we see in winter (in fact, starting any day now) is based on the severity of winter to our north.

Last year’s not-happening winter led to one of the slower seal seasons for the Center. Should New England see a more typical winter (as forecasted), we could get a major dose of seal visitors, based on that population burst.

That said, Sheila wanted me to re-state that beached/stranded/resting seals are protected by law and should not even be approached. However, seal sightings should be reported to the Stranding Center, so folks can be sent to check for sickness or injury.

Photo-taking is not the best form of recording a sighting. Not only won’t it show the overall condition of an animal, but, per Sheila, “If people are going up close enough to get a picture, they’re disturbing the animal.”

What’s more, even the likes of police officers – often the first responders to stranded mammal calls -- aren’t trained to recognize or determine the condition of a marine mammal. Best bet is to call the Center at 609-266-0538. 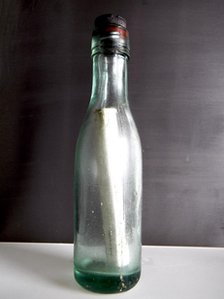 The bottle has been donated to a Shetland museum

A Scottish skipper has set a new world record after finding a message in a bottle 98 years after it was released.

Andrew Leaper's discovery beat the previous record for the longest time a bottle has been adrift at sea by more than five years.

And he found the bottle while skippering the same fishing boat which had set the previous record, the Shetland-based vessel Copious.

Mr Leaper said: "It was an amazing coincidence."

The find has been confirmed as a new record by Guinness World Records.

The drift bottle - containing a postcard which promised a reward of six pence to the finder - was released in June 1914 by Captain CH Brown of the Glasgow School of Navigation.

It was in a batch of 1,890 scientific research bottles which were specially designed to sink to help map the currents of the seas around Scotland when they were returned. Only 315 of them have been found.

Mr Leaper, 43, who found the bottle east of Shetland, explained: "As we hauled in the nets I spotted the bottle neck sticking out and I quickly grabbed it before it fell back in the sea.

"It was very exciting to find the bottle and I couldn't wait to open it.

He said his friend Mark Anderson, who had set the previous record in 2006 on board the same vessel, was "very unhappy that I have topped his record".

"He never stopped talking about it - and now I am the one who is immensely proud to be the finder of the world record message in a bottle." 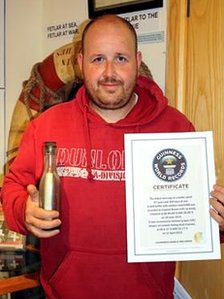 Skipper Andrew Leaper said it was like winning the Lottery twice

"This is a fascinating record, both historically and scientifically.

"We hope that future expeditions will retrieve more of these treasured messages from the sea."

Environment Secretary Richard Lochhead added: "Scotland has a long and proud tradition in marine science, stretching from these pioneers of ocean research in the 19th and early 20th Century, to the cutting edge marine studies that take place in our labs today.

"The story of scientific drift bottles is a fascinating one and harks back to an area when we were only beginning to understand the complexities of the seas.

"It's amazing that nearly 98 years on bottles are still being returned to the Marine Laboratory - and in such fantastic condition.

"With many bottles still unreturned there is always the chance in the coming years that a Scottish drift bottle will once again break the record."

The bottle, and Mr Leaper's Guinness World Records certificate, have been donated to the Fetlar Interpretative Centre in Shetland. A university researcher says caffeine has become a significant pollutant in the ocean off the U.S. Pacific Northwest and it's harming marine life.

Caffeine has become a significant pollutant in the ocean off the U.S. Pacific Northwest, according to a university researcher.

Elise Granek, a marine ecologist at Portland State University in Oregon, sampled waters up and down the Oregon coast and found measurable levels of caffeine.

Granek said the stimulant could only have come from humans, and is getting into the ocean through sewage effluent.

Caffeine is affecting marine life like mussels in much the same way it can affect humans, Granek said..

"We found that the mussels ramped up what we call 'the stress response.'"

She said that response can impact their ability to thrive and reproduce.

Granek found lower levels of caffeine where sewage was treated and higher concentrations where septic tanks were used or sewage was pumped raw into the ocean.

Granek, who did all her initial research in the waters off Oregon, said she's curious about caffeine levels in the Strait of Juan de Fuca between southern Vancouver Island and the Washington coast.

That's where Victoria pumps untreated sewage effluent directly into its coastal waters, and won't have a sewage treatment facility in place until 2018.

"It would be really interesting to study ocean waters around there at different distances from the effluent pipe and see what the levels are," she said.

Granek said she is not protesting against caffeinated beverages.

"It's not necessarily that one should stop drinking coffee, but that we need to better understand the extent to which these contaminants are entering our systems and how they're interacting with other contaminants and other stressors in the ocean." Before the Marine Mammal Protection Act was passed 40 years ago, early New Englanders had nearly hunted seals to death. They wanted them for their furs and to keep them from eating cod. Massachusetts even paid bounties on seals: $5 per nose.

The act has helped gray seals and harbor seals recolonize New England waters, but fishermen off the coast of Cape Cod say they have become a nuisance.

There's No Such Thing As A Free Lunch

A busy fishing harbor like the one in Chatham, Mass., is a swell place for the seals. Fisherman Sam Fuller says the lazy pinnipeds have learned to follow his boat like a chuck wagon, waiting for the crews to pull in nets full of fish.

Their sharp teeth also tear the nets, which can cost hundreds of dollars to replace.

The law that banned hunting the seals also bans any kind of harassing, so fishermen cannot shoo them away from their catch. Residents angry that their pricey beachfront property has become a favorite sunbathing spot for 300-pound sea mammals have their hands tied as well.

Ron Eppler, a dock worker, says fishermen should be able to do something about the problem. "If you own a ranch in Montana, and you've got a wolf problem or a coyote problem, you're allowed to protect your livestock," he says.

While the seals bug some locals, they are still a hit with tourists and children. "It's the busiest it's been," says Dylan Preston, an employee of Beachcomber Tours, who notes that seal watching boats have been selling out this summer. "I mean, sometimes we'll have seven to eight tours going out a day, which is pretty crazy. A good year, definitely."

But seals are also popular with bigger predators unconstrained by federal law. Last week, a family boating off Chatham saw a great white shark devouring a seal carcass. Last month, a swimmer was mauled by one.

Gregory Skomal, a state shark biologist, says the sharks are back because the prey is back.

Stephanie Wood, a biologist with the National Marine Fisheries Service, says that the ecosystem is still finding a renewed balance. She says the seal population has tripled over the last dozen years, but will eventually level off.

"There's only so much food and space," Wood says. "But I don't think we have any specific idea of when seals in Massachusetts are going to reach carrying capacity."

An aerial survey last year counted 15,000 seals in Massachusetts waters. For John Our, a fishing boat captain in Chatham harbor, it is like competing with 15,000 fishermen who don't have limits. He is pessimistic about controlling the seals.

"It would take an act of Congress," Our says. "And there's not a congressman in his right mind that's going to be the first one out that says, 'Let's go harvest seals.' "