Regardless of  how heated an issue, never take on a Parliament member nicknamed "Judo-son Joe."

Beloe: Beach Haven is thinking of getting a dozen of these ducks to patrol Centre Street on Saturday nights. 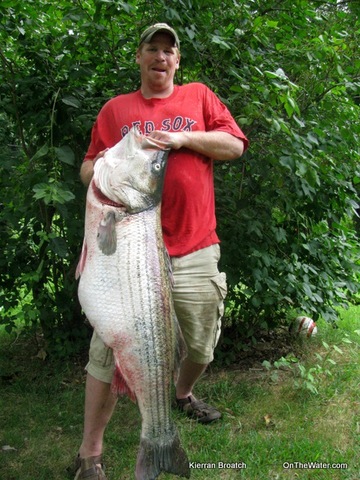 Above: For more, see further below.

Saturday, May 21, 2016: Well, here’s hoping you got to cash in on the amazing fishing Friday. The blues continue to amaze. Novel-writer John R. told me he had the greatest fishing day of his life on the BL New South Jetty, to the tune of eight bluefish – all over 10 pounds.

Too often those of us with constant access to fishing the Shore forget what a life-rush it is to pull onto LBI and in nothing flat be into huge fish. Hey, wait a minute, I’m going on 60 years here and that’s still a life-rush. I might be forgetting a lot of things but that isn’t one of them.

The first weekend of fluke season is mired in weather-related hangups. The NE wind is starting slowly today, allowing drop-everything folks to take advantage of a unexpected fluke-drift opportunity this a.m. However, many folks did one of those pre-cancellations upon hearing of the wind and rain from a fast-moving coastal low, which will move out to sea just to our south. Already this spring, it has been hard to predict if coastal storms will move up the coast or go straight out to sea. This latest storm seems to have us just in the rain zone.

Below: Paul Midura at Tuckerton Bay.

First Keeper of the season ! Enough for dinner tonight!

Fish Monger II Sat 5/21 Opening day Fluke! Of course cool hand Al would catch the first keeper of the year... loads of shorts and our first keepers of the season.

I know I’m a broken record when it comes to rain but I live by the old farmer’s maxim “Around there we like the rain.” It’s doubly important to get some measurable rain right about now after that potentially damaging bout with too-cold-for-May night temps. I’ve seen a nice rain perk up wounded plants. And, yes, my frogs are in dire need off wetness. The vernal (spring) ponds began drying way too soon. I should also note that this late, somewhat dry spring has left the Pines open to fire danger, mainly due a very slow greening.

Back to fishing, massive crowds are out the working the New South Jetty. Fish are around but I haven’t heard if they’re mugging them or not. I notice many a bluefish-weary angler has gone fully over to bassing in the surf, though that doesn’t even remotely prevent the chopper intrusion. A couple folks fishing stripers in Brant Beach yesterday couldn’t get past blues – even using bloodworms. Now that’s a costly intrusion.

Romeo just got this blue off the beach now. Man big fish are here.

To the fellows who sent me pics of tog taken: Blackfish have a closed season from May 1–July 16. I realize it was an honest mistake guys but you need to know what state you’re visiting.

Jingles Bait and TackleSnag and drop was the method that Morgan used to catch his
51 pound 2 ounce bass that was 51 and a half inches long and
had a 28 and a half inch girth.
Morgan was fishing a half mile off of Holgate when he hooked into what he thought was a brown shark. It took him 45 minutes to land it and he was unable to revive his fish.

RE-POSTING:  BAD/GOOD DREDGE NEWS: As you likely heard, the use of dredged sand from Little Egg Inlet is off. The sucked up sand would have gone to replenish the Holgate beachfront. Bilateral gains would have been deeper channels within the heavily shoaled inlet.

It seems the NJDEP – namely the Division of Fish and Wildlife – needs more time to study what ecological damage might rise up if the sucking of sand takes place inside the pristine inlet. “Pristine” because it has never been built upon on either side, i.e. no jetties or breakwaters. The further look-see demanded by the state could take many months.

Important: This does NOT mean the Holgate beaches will go un-replenished. The sand will simply keep coming from the current borrow site, The Lumps, off Harvey Cedars. The problem there is that site is running low on material, per the Army Corps. A sand-shift to Little Egg Inlet could be a savings grace, even allowing time for The Lumps to rebuild.

The potential loss of The Lumps does not sit well with the state’s Bureau of Marine Fisheries, which has long recognized the fishery value of those shallows. As most anglers know, that bio-rich area is often teeming with fish.

It goes without elaborating that the loss of a timely LEI/Holgate hookup has mariners and fishermen furious. They’ll have to bump their ways through another summer of dangerous passages. Many of them are letting me know their extreme displeasure … as if.

But all is not lost in the effort to use Little Egg Inlet sands. Along those lines, I have good news and bad-plus news.

I’ll lead with the bad-plus, since I’m getting asked left and right if there is still a chance of the inlet getting dredged – even without the sand being pumped onto the beach. Good question, bad answer.

I’ve looked every which-a-way and it sure seems all the inlet-dredging eggs had been put into one basket, egging on the LEI/Holgate hookup. Right now, on its own.

Hey, you might want to hold on for the “good.”

The state is only asking for some extra time to study the eco-impacts of the dredging. While extra time kills any chance of Holgate seeing LEI sand this go ’round, it keeps the dredging door open.

As the NJDEP sorts through the lives and times of everything from nurse sharks to piping plover (don’t ask), its final decision remains to be seen. By my calculation, there is a solid 50/50 chance that a clean bill of environmental health will be given to transferring inlet sands to Holgate beaches in the future.

But what good will the future do us?

In response, I have just two words: Surf City. That borough is already heading toward a third re-re-replenishment. If I know erosion on the south end – and I do – a re-replenishment shouldn’t be all that far off.

Hey, I’m a born tomorrowist, as in, “The sand will come out tomorrow, bet your bottom sand dollar…” OK, so that doesn't meld so well but I’m keeping a well-tuned eye on the definitive LEI/Holgate decision by Fish and Wildlife.

Greg Myerson’s 37.1 kg (81 lb 14 oz) striped bass record was approved yesterday morning after the IGFA’s Record Committee came to a consensus on the catch and its supporting documentation. Myerson’s catch created a whirlwind of excitement in early August for striper anglers everywhere, but especially in the northeastern USA.

“After a 15 minute fight on my St. Croix rod and Quantum reel, I got the striped bass close enough to the boat for netting,” Myerson shared in the testimony accompanying his world record application. “The fish was bigger than I thought. I slipped on eel slime and banged my ribs against the gunwhale of the boat. But it didn’t matter. The monster fish was mine. At this point it was about 8 pm, I put the fish into the hold and fished the rest of the tide. As I fished, I repeatedly peered into the hold and asked myself ‘is this striper really that big?’ The following morning, I brought the striped bass to Jack’s Shoreline Bait and Tackle to be weighed. The fish measured 54 inches in length and tipped Jack’s digital scale at 81.88 pounds. It really was that big.”

The IGFA’s approval of Meyerson’s catch marks the end of Albert McReynolds’ 29-year reign as All-Tackle record holder for this prestigious saltwater species. In addition to now holding the All-Tackle record, Meyerson’s catch also landed him the new men’s 37 kg (80 lb) line class record, which previously stood at 70 lb. Congratulations to Greg Myerson on this historical record catch – and good luck to you striper fishermen aiming to best it in the future!

Check out these photos of Greg’s incredible catch, which was weighed-in for the 2011 Striper Cup, and then read an account of the hectic morning after Greg caught the new world record striped bass. Greg Myerson struggles to hold up the world-record striped bass. Greg Myerson hoists the mount of his 81.88 Pound striped bass that earned him Striper of the Year and Boat Division Angler of the Year titles.

David Ittner of Yamaha (left) and John Kushnerick of Quantum (right) present the mount of the 81.88-pound Striped Bass, made by Northeast Taxidermy, to Greg Myerson. The world record striper was caught on a Quantum Reel that Myerson won at the previous year's StriperFest! 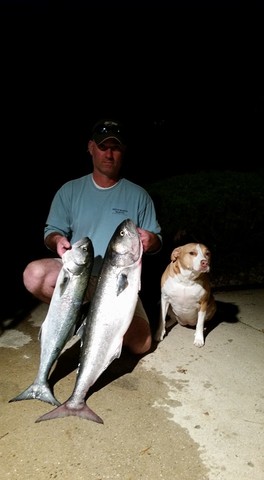 A little after work plugging session with Jake Adams. Wanted to test some new gear out and we did! You know it's a good day when your lures are covered in blood. 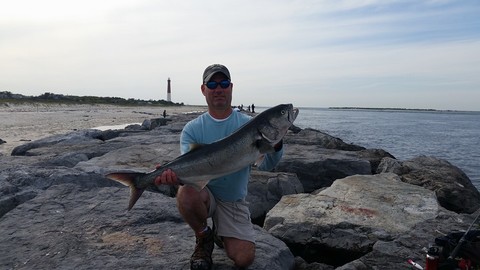 (View from the other side of things) First trip to the Canyon this year. Nice ride, cold water ,no fish. 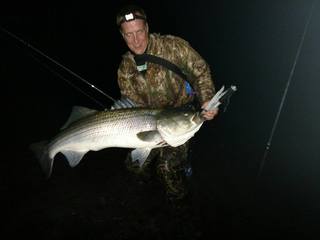 52 lber! Finally broke my 42 lb record. 1 AM in the morning on a Super Maverick.# Van Staal # Shimano Teralejo # Rhode Island 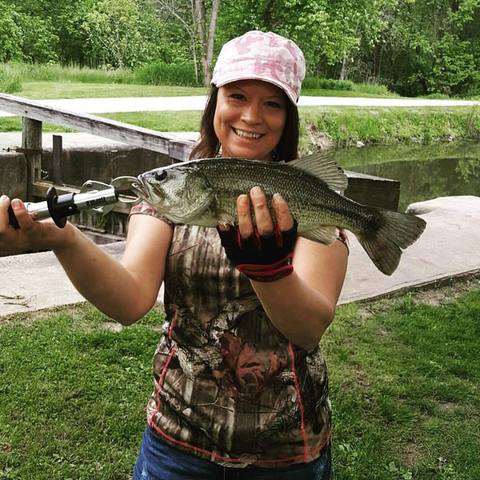 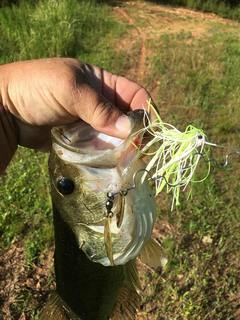 Nick Honachefsky with James Amore and 4 others.

Sometimes the "Sandy Blues" can be a good thing! 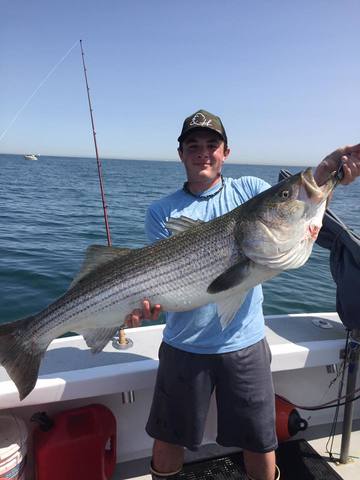