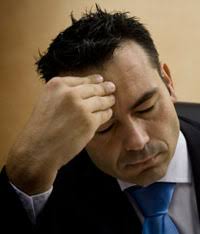 April 5, 2013: (Note: In order to pop these out there are often typos. Please ignore and know I'll get to them at a later date. Thanks.

At this still fully stirred junction in my Island life, I really didn’t need the recent LBI Surf Fishing Classic crisis. Dozens of other pressing post-storm issues continue to blow around, as yet uncontrolled. But, on first blush, it sure seems that the Classic has taken on a smiling, somewhat tired, new face.

I will vent a bit by saying I didn't like being among those essentially blamed for publicizing the problem. Firstly, informing folks is not just my job but my life, having begun in earnest during my surfing hippyish days, fueled by the “power to the people” thing. For that reason, I really have to rethink my usefulness as a tourney committee member – for the sake of the event. 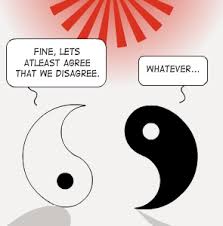 As for my relationship with the Chamber, we have amicably agreed to disagree on the essence of the blow-up. My feeling was/remains they were trying to make a cold clean break from the event. I spiced it with, “What were you thinking!?” Their assertion was/remains the communique should not have been passed on to the public and that, even then, it was misread and that the chamber simply wanted a change of what might be called leadership. Again, we agree to disagree. Whichever, the short-lived crisis surely exploded beyond what the Chamber had anticipated. It especially roiled things at a commerce level. As I told my boss, a majority of area businesses have an angling angle, all the way up to the business-owner level -- from the Sea Shell to The Ketch to Ship Bottom Shellfish to Foster’s Market to Stefano’s to countless Realtors to on-and-on, not to mention dozens of contactors, many with rod holders on their vehicles. Face it, fishing pervades LBI life. 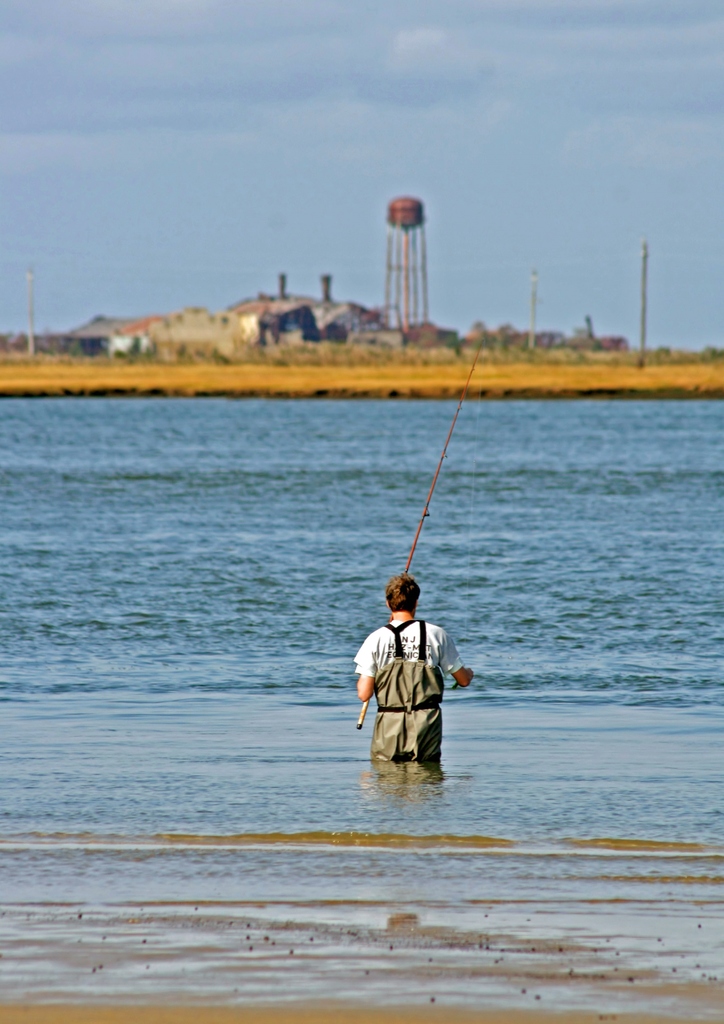 Interestingly, both the chamber and the tourney committee would like to quickly parlay the Island’s angling obsession into energizing the new bigger-and-better Classic. I’d even like to see a serious spike in the Grand Prizes. Of course, the $2.19 I have to my name wouldn't be enough to power a pinky finger push, much less a spike. I'm a walkin’, talkin’ version of the talk-is-cheap maxim. That’s where the team effort antes up. 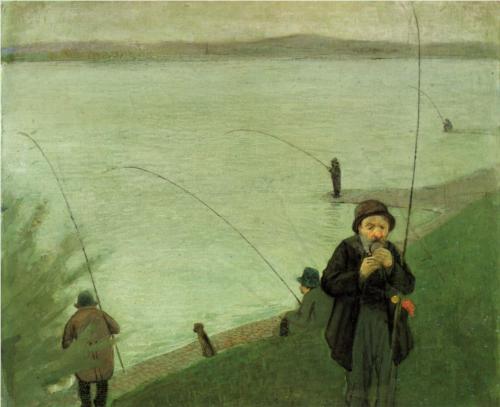 There are some significant bass being taken in the LBI surf. I can say that from a firsthand report – and photo -- though, as if often the case, the report comes from someone who seems to find fish long before mere mortals find them. Smaller bass are take-able on artificials, including rigged eels – if anyone knows how to make them still.

More along my lines of pursuit, time-wise, there are stripers in Manahawkin bay. These are night prowlers and one that was kept was loaded with shrimp and some blue crabs. One that was released regurged a small winter flounder. Jigs often work, especially when trailing flavored tails, i.e. GULP. 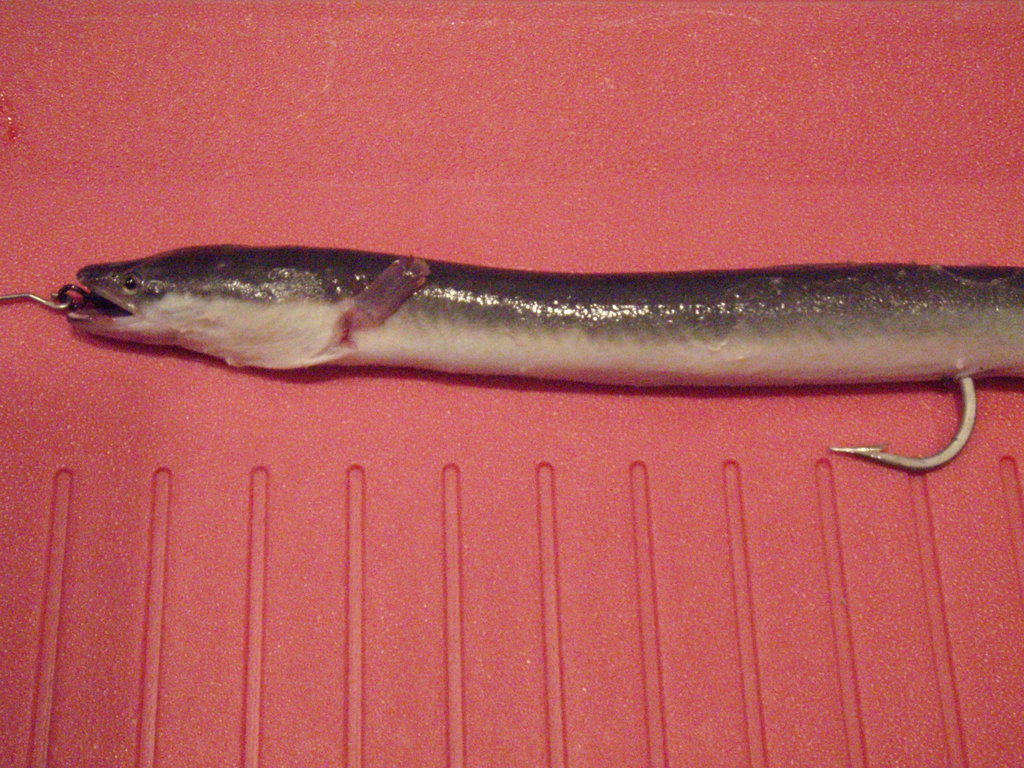 I’m not hearing much about winter floundering. Any word would be appreciated. No sites need be mentioned by name.

There’s a real skunk in Ship Bottom. I’m not talking about some lousy person, but a bona fide wild mammal type skunk. That’s kind of a rarity. 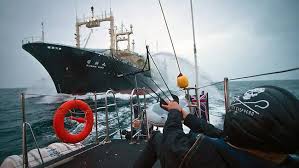 Below shows the success of anti-whaling efforts. Like the heavily-armed efforts to stop rhino horn poaching in Africa, the teams of whale-stoppers now include some seriously militarily trained personnel.

The haul from Japan's whaling mission in the Southern Ocean was a "record low" this year, a government minister says, blaming "unforgivable sabotage" by activists.

The hunt netted just 103 Antarctic minke whales, less than half its tally last year, and no fin whales, Agriculture, Forestry and Fisheries Minister Yoshimasa Hayashi said on Friday, adding it was the lowest total since "research whaling" began in 1987.

The fleet, which was again harassed by militant environmentalist group Sea Shepherd, is due to arrive back in Japan over the next few days, Hayashi told a press conference.

During the 48-day-long whaling expedition, campaigners - labeled "pirates" earlier this year by a US judge - disrupted the hunt four times and the Japanese ships spent 21 days avoiding their vessels, the Fisheries Agency said.

Sea Shepherd committed "unforgivable sabotage", Hayashi said, according to Kyodo News, including a collision with a whaling vessel as it was being refuelled.

"We will seek more support from other countries to conduct research whaling in a stable manner," the minister said.

Australia and New Zealand in particular have voiced outrage over Japan's whale hunting, and Canberra has taken Tokyo to court to challenge the legal basis of the "research".

"That's why we are taking Japan to the International Court of Justice to stop this practice forever."

Captured whales, later sold as food, are studied as part of a bid by Japan's whaling research institute to prove their populations can sustain commercial whaling. Activists charge Tokyo uses the loophole to get around an international ban on hunting.

Norway and Iceland are the only nations that hunt whales in open defiance of a 1986 moratorium on commercial whaling.

Japan's whaling fleet left port in December aiming to catch around 1,000 of the huge mammals.

Sea Shepherd, whose founder Paul Watson is an international fugitive, has doggedly pursued the whaling fleet and makes no secret of the fact it employs highly confrontational tactics.

The organisation's ships Steve Irwin, Bob Barker and Sam Simon returned from their campaign this year with an estimated $A1 million damage bill after run-ins with Japanese whalers.

Their fourth ship, the Brigitte Bardot, was at an undisclosed location with Watson, wanted by Interpol after skipping bail last July in Germany, thought to be on board.

The two sides have in the past clashed violently in exchanges that have seen stink bombs thrown at Japanese crew and water jets trained on protesters. 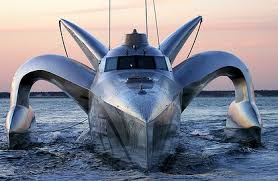 The bitter fight has also reached the legal arena with both sides filing lawsuits against the other.

Last month, Sea Shepherd filed a lawsuit in The Netherlands against the crew of Japanese whaling ship Nisshin Maru alleging piracy and attempted manslaughter after they clashed in the Antarctic Ocean in February.

In a colourful pronouncement, a US appeals court in February labeled Sea Shepherd "pirates", overturning a lower court's ruling against Japanese whalers.

The same court in December ordered Sea Shepherd to maintain a distance of 500 metres from Japanese whaling ships.