I think some of you might wanna read this about the new Causeway bridge work. GOOD-BYE OLD CAUSEWAY BRIDGE: As the Causeway work carries on at a slowly decent pace, there is a look perplexing many folks. When crossing the Big Bridge, you can see progress on the adjacent two-lane sister span, which will someday carry all eastbound traffic. Perplexing is the fact the old Causeway Bridge is four lanes wide ... way wider than the new sister span, by two lanes.

That asymmetry makes sense when you factor in the advertised “bike lanes” and wider “pedestrian shoulders” to be included in the redesign of the old Causeway Bridge -- when it gets torn down and rebuilt.

Yes, torn down. Our beloved Causeway Bridge is too old to save. It’s going to be pretty much demolished down to the waterline and then rebuilt. Per the Governor’s office, “The existing Manahawkin Bay Bridge with the entire existing superstructure (is) scheduled to be removed and replaced. This work is more extensive than previously planned. Originally only the bridge deck was to be replaced.”

I sure hope I get to be on-scene when the old girl comes crumbling down, be it with the help of jackhammers, Miley Cyrus swinging a wrecking ball or (coolest of all) explosives. The last really cool explosion on LBI was when we blew that dead whale up real good.

To catch you up, here’s the final configuration plans:

“Rehabilitation of the three trestle bridges will result in two 11-foot-wide travel lanes in each direction, as well as 1-foot-wide inside shoulders and 6-foot-wide outside shoulders to accommodate bicyclists. The westbound lanes will also offer a six-foot-wide sidewalk.”

Note well: All of the bike and pedestrian amenities will be on the north side of the new Causeway, i.e. where the old bridge will be torn down and rebuilt.

About that bike lane: Per NJDOT, that big lane for bikes is meant to – and I’m not making this up – reduce traffic to LBI by getting more people to bike over to the Island. That strikes me as an odd concept, except maybe in China. How many bicyclists will use the bridge daily?

Important: Before we go further, we have to get some island/sedge names straight. Per the NJDOT, the larger island at the east end of the Causeway Bridge(s) -- where The Shack once lived – is Cedar Bonnet Island. The smaller, heavily lived upon island closer to Ship Bottom, holding The Dutchman’s, is Bonnet Island.

CAUSEWAY PROJECT’S CEDAR BONNET ISLAND SPRUCE UP: I’m getting tons of questions about the over-obvious work being down on the south portion of Cedar Bonnet Island, south of the Causeway/Route 72, owned by the Edwin B. Forsyth Wildlife Refuge (Refuge). That work is marked by heavy earthmoving equipment and orange fencing.

Technically, that work falls under the “Environmental Mitigation Contract” portion of the Causeway Project.

When done, Refuge wetlands will be reclaimed adjacent to Rte. 72, including a brackish (sometimes freshwater) pond where we use to play ice hockey because it froze so quickly.

I’ve been told that part of the “mitigation” will include trails through a maritime forest and also a primarily south-facing bird-watching overlook. (I got some of that info from some workers, so it’s not etched in concrete.)

I think the so-called mitigation work being done on the Refuge will result in a very cool natural attraction for the public. As to the public getting to it, things could get a bit walky – even troll-like. I’ll explain.

“Pedestrian access to Wildlife Refuge will be under the bridges,” per the plans.

You’ll only be able to access the Refuge on foot by hiking in under the spans.

Motorists will be able to utilize designated parking areas off the westbound side of the New Causeway/Route 72. As of now, there will be no parking available on the south side of the Causeway. That makes huge sense considering the traffic, as it blows eastbound down the bridge toward LBI. Nature lovers nonchalantly pulling off and on that stretch of eastbound roadway could be Splatsville.

The underpasses will be paved, lit beneath the bridges and will have handrails. The paved walkways will end with bollards across the walkway, allowing pedestrians to pass but (possibly) not bikes. I’m just reading that into the blueprint, showing those bollards being used for some sort of blocking purpose. After the bollards, unpaved walking trails will lead into the refuge.

I can already hear some motoring folks wondering how to get back to LBI after parking on the north side of the Causeway – with only westbound lanes to exit onto.

Below: This likely won't be the look ...

HIDDEN HISTORIC LIGHTING: I want to mention another bridge issue I should shed light upon.

In looking over the Causeway game plan, I came upon some small print I missed when I first announced the old style in-rail “String of Pearls” lighting will be maintained on both spans, albeit in an LED-based form. It turns out those throwback lights will NOT be visible as you drive over the spans. You read right. They’re for external viewing only, i.e. when seeing the bridges from afar. They’ll be angled away from bridge crossers, sorta like side-lighting. Yes, the famed peripheral gleam of the String of Pearls will be gone as we cross the big bridges. 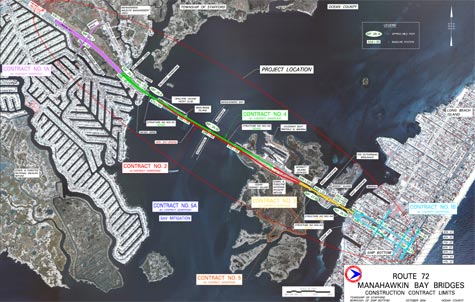 SHIP BOTTOM "CAUSEWAY" LANE INCREASES??? You can read the maps. I'll have more on this later. 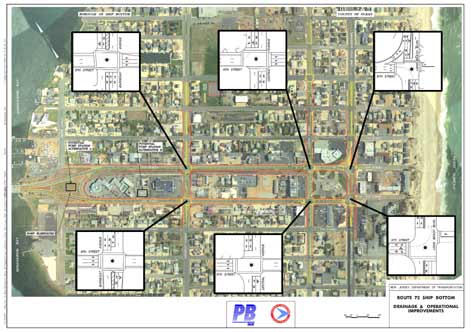 Afterthought: The Pedestrian walkways to the Refuge, under the bridges, might be fishable, especially on the east side of Cedar Bonnet Island.

56 extra feet for walkers and bicycles  ??  Laughable. And why not  make it 3 lanes going east since there are3 lanes once you hit Ship Bottom.

Comment by Joe Graber on September 30, 2015 at 8:48am
Jay TY for that information.
I see nothing about handicap considerations. which I feel should be mentioned.
It's funny to see or read about the upcoming renovations and additions as I have mixed feelings.
As a teen, we used to duck hunt on Cedar Bonnet and Bonnet and walk across the causeway and jump on the school bus with our guns, still in hand.
Today I just hope my walker will allow me access to Cedar Bonnet and Bonnet Islands in their entirety.