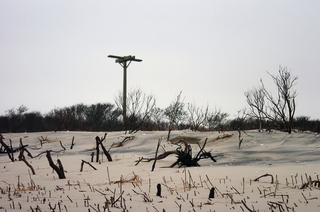 (The Holgate erosion pushes onward -- and inward. This, the famed Osprey Nest, was once over 100 yards back in the heavy vegetation of Holgate's then-uplands. The end is near for much of the South End. -- Go to https://jaymanntoday.ning.com/)

(REMEMBRANCE: The viewing for Melanie “Mel” Boytos will be Sunday December 30 at Shinn’s Funeral Home between 6 and 9 p.m. The flowing day there will be an 11 a.m. memorial service at St. Mary’s Church, Barnegat. That will be followed by a reception at the Elks. In lieu of flowers, a scholarship fund will be raised. There is more information into today’s Asbury Park Press and the Beacon.)

Well, the big day is over but the aftereffects linger as “Return Policies” are explored – and some fairly fun-to-watch exchanges (no pun intended) take place at Customer Service counters around the nation. Yes, I’ve occasionally spent time just hanging around “Return Lines” just to hear why things are being returned – and most of all why some things can’t be taken back, as in the fact that 90 percent of an item was consumed before the consumer decided it wasn’t quite right.

As for me, I get into what might actually feel like a little vacation time; a week’s worth of doing a year’s worth of stuff I kept saying I’d do over the holiday vacation. That translates into me going into the woods or onto the beach to ease my mind about all I have to do. Makes sense to me. I’ll be seeking old bottle sites so if any of you have any insights into areas that were used for dumping (prior to, say, 1945) please let me know where said sites might be. If it’s a good enough locale, I might even pass on a piece of the art I make from all pieces of glass and pottery.

An emailer asked about this stretch of mildish weather and whether it might provoke the short-lived schoolie bite. Well, there are actually a few bass still out there, both beachside and out a short way, couple miles tops. Still, the hideous fall fishing would not lend itself to a massive reshowing of stripers even as we see days (and possible weeks) of very moderate temperatures arriving. The only thing that might happen is the few remaining schoolies will hang nearshore for the time being. Nebraska zone still seems a potential area.

I have been trying to get more information on the tragic kayaking trip that led to the death of Robert Gaudiosi, 22, Tuckerton. As you know, I’ve been kayaking since these arm-powered vessels first became highly popular in the 80s. I’m therefore double sensitized to accidents like this, and they are fairly common.

A Coast Guard spokesperson only offered information that the young paddler had gone out Monday morning for a short paddling session in the backbay area. When he didn’t return by 3 p.m., the family alerted the Coast Guard, which responded immediately, broadcasting an alert and activating air/sea rescue.

At 4:30, an unconscious and unresponsive Gaudiosi was found in the vicinity of Rose Point Marsh. He was flown to the trauma center at AtlaniCare Regional Medical Center where he was declared dead. Per a Coast Guard report, he was not wearing a PFD or survival gear though there was no indication of the cause of death.

Conditions were very testy that day with gusty and cold winds pushing 25 mph in gusts. I can attest to that having been right across the bay (Holgate) when the accident took place.

Since the family has not allowed the Medical Center to issue information, the exact cause of death is unknown. The paddler was a young guy. However, I’ve often noted how quickly things can go bad when kayaking in rougher conditions. Still, that backbay area is not overly jeopardous. I hope the medical findings are released so other kayakers can be informed.