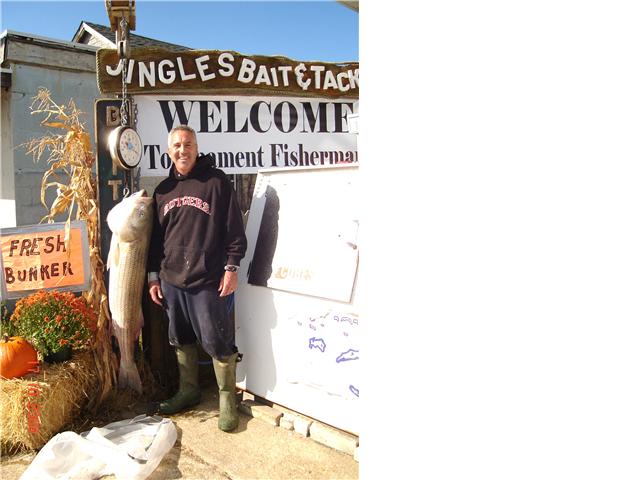 46-4 (see below) GREATLY APPRECIATED: It’s that annual humbling time when I seek donations to keep this site running through the coming year. I have no sponsors -- outside those who read and support the site. This is my only fund-drive. Any and all donations go toward the website. And financial support is needed. Jay Mann 222 18th Street Ship Bottom, NJ 08008-4418 Friday, October 17, 2008: Waves: Choppy 2-3 foot north wind swell. Well, it sure has begun, big time. Bassaphiles, the bar has been set – and set and set. Peter Bartolomeo weighed in a 37-4. Not impressed? Jonathan Clark tallied a 38-9. Only so-so? Try Matt Onofrio and his 46-4. There were other large bass taken from north to south on LBI. Many were plenty sizeable. Something like a dozen were bound for the tourney. Others were released or weighed in at tackle shops, I think the weekend is perfectly timed – so to speak. The north winds (and chill) seem to be the trigger and the trigger is going to stayed depressed through Sunday. Big chunks of fresh bunker are the way to go for the arriving weekender. I’m thinking live-lined offering flipped off jetties might draw huge attention. Usual disclaimer: A load of folks were out there fishing today and most didn’t get a clue that big bassing had begun. It’s a spread out bite but when dealing with trophy stripers that’s the given pass of hooking. I hope to get some input from the catchers of these bigger fish. If I don’t email you first, please contact me with details. Many folks live variously through those few who catch the fish. Many can’t even make it here to fish so I like to put them in the hooker’s seat. Two slammers blues also came to the contest scales. I think the bluefish action will supersede the striper bite by tomorrow. That points to some fun hooking. I’ll be driving the beach at sunrise Emails: . Hey Jay - Brian from Forked River. Peanuts - big peanuts - just pooled up yesterday and for about 8 hours made it look like the bay was boiling. That was it. They are Ghandi! I netted about 500 in one cast and kept only a ziplock full for my surf fishing adventure today. Always sad to see the bait go. I heard from some other west-siders that the bait was still in the lagoons but not near us. Hit IBSP today and worked area 7 to the jetty but didn't have any hits. Worked clam, plugs and bunker to no avail. Chilly morning but beautiful sunrise - Gannets were diving - terns were bombing the inlet - and bird play was starting to pick up - just no takers. Saw no surface action - no visible bait and only one fish landed near us. (small striper) - red tide was hanging about 100 yards off the beach and the water was very dirty. b (Thursday) Jay, Fished the BH bay side from 11pm to 1am. Only caught a single 17" fluke on white gulp. Pretty slow. Threw a net on some decent sized peanut bunker and I took them to the mid island surf to live line. Tide was on the lower side but conditions looked good. First bunker wasn't in the water 5 minutes and it was fish on! The fish felt like a smaller bass, but it turned out to be a 16" weakfish. I ended up catching 3 or 4 weaks to 18". Released them all. They weren't what I was looking for, but they kept me from falling asleep. Back at it in a few hours at daybreak. Joe H